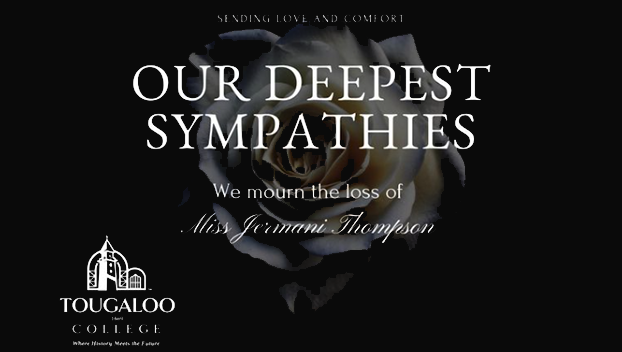 The Tougaloo College community is mourning the loss of one of its graduates who was killed in a workplace accident at the New Orleans International airport.

NBC News reports that ground worker Jermani Thompson was helping offload an aircraft at the Louis Armstrong New Orleans International Airport when her hair became entangled with the machinery of a belt unloader. The accident reportedly happened at approximately 10 p.m. Tuesday.

Thompson, 26, an employee of GAT Airline Ground Support, was rushed to a hospital, where she died, airport officials said.

Tougaloo college President Carmen J. Walters issued a statement about Thompson, a 2019 graduate of the college in Jackson.

“We are all heartbroken to learn of the sudden death of Tougaloo Eagle Miss Jermani Thompson, who tragically died on August 30, 2022.” Walters wrote. “We extend our deepest sympathies to the family, the Class of 2019, friends, and the College community as we mourn the loss of a spirited, caring, and thoughtful, scholar, athlete, and alumna. We extend our thoughts and prayers to the family and ask God to give them peace and strength to rely on each other during these difficult times and, more importantly, to rely on God. Proverbs 18:10 tells us, ‘The name of the Lord is a strong tower; the righteous run into it and are safe.’ Funeral arrangements are incomplete. We will provide an update about Miss Thompson’s services as soon as they become available.”