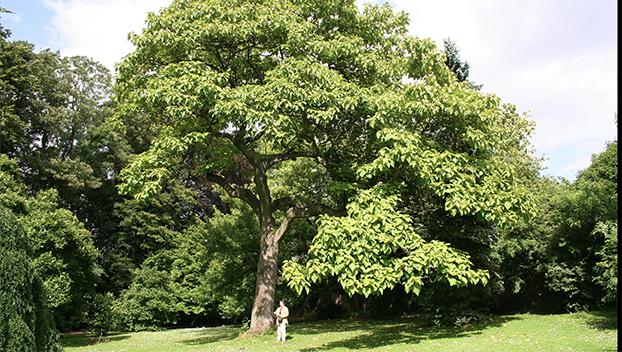 In late June, Eddie Baker planted some trees on his land in the Palmetto community that have folks talking.

“There’s been a tremendous amount of interest in them,” said Baker, 71. “I’ve had phone calls, visits. People use the word-of-mouth grapevine. They want to know what it is.”

The trees are Empress Splendor, a fast-growing hardwood tree that will reach full maturity in just 10 years and regenerate multiple times without replanting. The botanical names are Paulownia elonagata and Paulownia fortunei.

“There is one Paulownia tree that’s very invasive – that’s Paulownia tomentosa,” Baker said. “This is not that tree.”

Baker first heard about Empress Splendor trees about two years ago when he saw a post about them on Facebook.

“I started investigating, but wasn’t too interested at the time,” he said. “Eventually, I called a farmer who was growing them in Alabama, and I went to his farm and looked at them. He answered a lot of my questions and encouraged my thinking.”

In June, Baker was in Montgomery, Alabama, when he swung by a plant nursery that grows the Empress cultivars for World Tree, an agroforestry company that’s developing Empress tree farms to promote sustainably sourced hardwood lumber.

“They gave me two trays of plants – 21 plants to a tray,” Baker said. “Only 36 survived because of the heat and because I was late planting them.”

Spring is the ideal time to plant; Baker got his plants in the ground the last three days of June. He planted the hardiest six trees in his front yard, and the rest in a pasture away from the house.

In two months, the 8-inch cultivars have grown almost an inch a day. Some of the largest leaves on the plants measure more than 20 inches across.

“These trees are multi-faceted,” said Baker, a retired over-the-road truck driver. “They’re grown for their wood and for their nectar, and you can graze cows and sheep below them.”

Next spring, Baker will cut his trees down to the ground.

“Cutting them off in the spring seems counter-intuitive,” Baker said. “Why would you go to the trouble of planting them and growing them and then cut them off? But that’s what you do. Then it will send suckers up. You pick the best one or two and get rid of the rest of them. Let that one good sucker grow, and it will shoot back up. Then you basically leave them alone.”

The trees need full sun and regular watering the first year – that’s why Baker planted some trees in his front yard.

“When you get up in the morning and look out the window and the tree arms are out, they’re fine,” he said. “But if you look out and the arms are droopy, they need water. Then, I know the ones in the pasture need water, too.”

According to greenmoney.com, the Empress tree is rated the fastest-growing hardwood tree in the world, maturing in only 10 years to produce a timber that has the highest strength-to-weight ratio of any hardwood commercially grown. While growing, the tree sequesters large amounts of carbon, the main cause of climate change. One acre of Empress trees can absorb up to 90 metric tons of carbon per year – four times as much carbon as the average American family of four produces in one year.

“All our old-growth hardwoods are being cut, and they take 40 years to grow,” Baker said. “The Empress will have three to four harvests in that same time.”

The trees Baker has planted in Palmetto are his test subjects. Next year, he plans to sign a contract with World Tree to grow them for the company’s cooperative program. Landowners have to guarantee a minimum of 20 acres with a density of 110 trees per acre.

“The trees won’t cost me a thing,” he said. “My job will be to plant them, water them and fertilize them. When it’s time to harvest, World Tree will send a crew to cut them, load them and haul them to the mill. The landowner gets 50% of the milled sale. The company gets 25%, and investors get 25%.”

If managed properly each tree can bring thousands of dollars, Baker said. The wood is prized for high-quality furniture and is sought after for instruments and things like surfboards, because it’s extremely durable, but light.

“I started this venture to leave a legacy for my grandkids,” Baker said. “If they will manage these trees, then after the first cutting (for World Tree), they can have the future harvests for themselves. For a young person with a little land and a little time, this could be a good thing.”