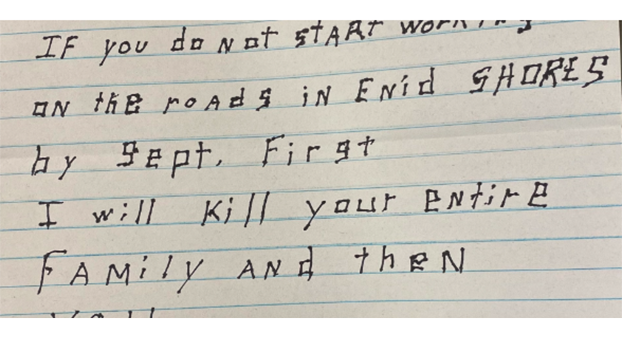 Sheriff Shane Phelps said Tuesday the investigation into the origins of a letter that threatened the life of Panola County Supervisor John Thomas two weeks ago is active, and the concerned public can expect developments in the case soon.

“This isn’t CSI,” Phelps said. “These things take time because we have to be careful.”

The threatening letter was received at the Batesville Courthouse on Aug. 16. It had been postmarked in Memphis on Aug. 12.

The unsigned letter said if Thomas did not begin road work at Enid Shores by Sept. 1 the writer would first kill the supervisor’s family and then him.

While some took the correspondence to be an idle threat of a disillusioned citizen, Phelps said the Sheriff’s Office has treated the incident seriously. He said last week a person of interest had been identified, but wasn’t able to be questioned because he was hospitalized in Memphis following an auto accident.

That person, known to live in the Enid Shores subdivision at times, was discharged last week according to neighbors. Phelps said investigators are aware of his dismissal and would continue to pursue all leads.

“We have gotten more phone calls from Enid Shores residents and I think we will have some answers for everybody soon,” he said.

Phelps said deputies have continued to make regular passes by the Thomas’ house since the letter was received, but no special actions were planned to coincide with the Sept. 1 deadline mentioned in the letter for road work to begin.

While it isn’t unusual for citizens to complain about road problems, rarely does it escalate to physical threats, especially towards an official’s family members.

Some residents of Enid Shores have long complained about the county’s policy of not providing grading of the gravel roads in the area, but most understand the supervisors’ are prohibited by state law from providing materials or labor for their roads because they are private roadways, having never been county property.