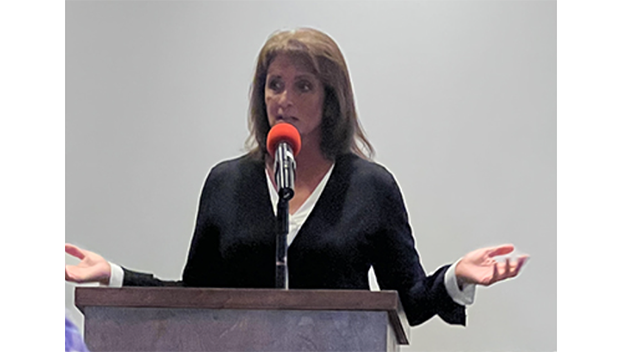 As the keynote speaker of Thursday’s Kiwanis meeting at the Natchez Grand Hotel, Melanie Sojourner, District 37 senator and a Natchez native, reflected on what she fears will be her last legislative session following the state’s redistricting plan.

Sojourner said she publicly “butted heads” with the Lt. Gov. Delbert Hosemann over the new legislative districts, which combine most of the district now represented by Sojourner, a Republican, with that of Sen. Albert Butler of Port Gibson, a Democrat, to create a single majority-Black district.

Sojourner, who for two years has been awarded by the American Conservative Union for upholding conservative promises to voters, said the new Mississippi legislative lines seem to help Butler.

Many items passed this session that Sojourner said she is personally proud of, including a historic pay raise for teachers, a ban on teaching critical race theory in Mississippi’s public schools and record-level funding of statewide repair for road, water and sewer infrastructure.

Sojourner said she is also proud to have been able to codify a voter referendum that helps protect private property owners’ rights in matters of public interest, such as building projects.

“We have had some leadership in the past in Mississippi who thought that just because you own a piece of private property if your neighbor can turn it into a greater tax base value then they should be able to take it from you. I’m passionately against that,” Sojourner said. “Three times this session we had bills come forward to allow the private sector imminent domain power in Mississippi and three times we had to fight really hard to get those bills killed. … At the end of the session when there was a lot of negotiation over a couple of big-ticket issues, we were finally able to pass a bill that codified a referendum the people passed about 10 years ago when we put into our constitution the protection of private property rights. That was a big deal.”

Sojourner said she is not so proud of other items.

During this session, legislators adopted a state income tax reformation that began as a repeal of the state income tax. Sojourner said repealing the tax would boost local economies, but not every legislator supported it.

“That issue took up most of the session,” she said. “We lowered the tax burden but did not repeal it.”

Along with raises for Mississippi teachers, a number of other raises that Sojourner did not support were passed this year.

“We actually in Jackson this year gave pay raises to a lot of people and to be upfront I didn’t support most of them. I only supported two: teacher pay raises and pay raises for law enforcement officers.

“We’re looking at a time in our country when a lot of things are going on and a lot of people are struggling in the private sector. I just didn’t think it was fair to be giving public sector pay raises, especially when leadership in Jackson brought forward pay increases for every elected official in the state.”

Sojourner said she was outspoken in her opposition to a bill that the lieutenant governor’s office brought forward to raise legislators’ salaries.

“I thought that was crazy thinking at this time when so many families had come through the pandemic and businesses were struggling, how dare the officials give themselves a pay raise? Thank goodness we were able to kill that one.”

However, the Legislature did give a hefty salary increase to local elected officials state-wide, including supervisors, she said.

“A lot of the local leaders, to their credit, reached out and said, ‘Hey, if you don’t want to vote for it, I don’t blame you,’” Sojourner said.