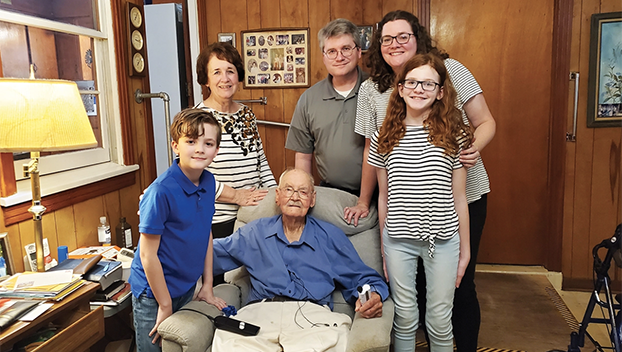 Celebrating birthday number 102 Tuesday, Sept. 6, Rhodes, who now calls Brookhaven home, has seen more people and things come and go than a vast majority of others alive today. He’s been around longer than cell phones, televisions, microwaves and vacuum cleaners.

The U.S. Department of Veterans Affairs estimates there are fewer than 169,000 United States World War II veterans still alive — about 1 percent of all the men who served. Fewer than 0.01 percent of Americans live past age 100. Rhodes — “Mr. Cecil,” as most who know him call him — falls into both those categories.

He’s lived in Brookhaven for 73 years and enjoys his home on Rhodes Lane in the Halbert Heights area. On Thursday, Sept. 8, well-wishers can drive by his home 2-4 p.m. and wave and possibly say hello to him, depending on the weather and how he feels.

Mr. Cecil is a tall thin man who was often seen prior to the COVID-19 pandemic at various events around town, at his church home at First Baptist Brookhaven or sharing coffee and conversation with his buddies at Burger King. He would have his wooden cane and be wearing a World War II veteran cap and a near-perpetual smile.

Now he says he has to have his wheeled walker to get anywhere — “Or I’m stranded” — but he still does get around.

His average day involves reading a chapter of the Bible, followed by a trip outdoors.

“I get outside and walk back and forth to get these legs limber,” Mr. Cecil said. “If I get in my chair it’s hard to get out. It’s too comfortable.”

Just as he’s done for time immemorial, he’s growing tomatoes — though only one of his four plants is “doing good” — watermelon and squash in his garden.

“I do it for therapy,” he said. “It’s something I can look forward to. It’s something for me to occupy my time and not be idle. I try to stay active.”

When he feels up to it, he mounts his motorized scooter and scoots around his neighborhood, visiting with people who are either already outside, or who come out to greet him.

When it’s baseball season and the Atlanta Braves are playing, Mr. Cecil tries to be in his comfortable recliner watching. And when it’s football season, he’ll watch a lot of games. Watching sports makes him happy, as does visiting with friends, and the love and support of his family.

“I’ve heard about as parents get older, children pushing them aside, but that’s not true for me,” said Mr. Cecil. “My children Byron and Sheila take good care of this old man.”

He surrendered his life to Jesus more than nine decades ago, and was baptized in a neighbor’s cow pond, after they’d chased the cows out of it. His relationship with God has been his greatest blessing.

“I have been so blessed. Never in this life did I plan on old age (but) for whatever reason the Lord has left me here,” he said. “I can still sleep in my own bed. I’m just thankful that the Lord has blessed me like he has. Even though it’s limited, I can still take care of a lot of personal things. I don’t move as fast as I once did, but I can get up. I can stand and balance myself and move along.”

Surrounded by some of his family the day before his birthday, Mr. Cecil was happy.

“The Lord has just taken care of me. Through the years I have just been blessed so much.”