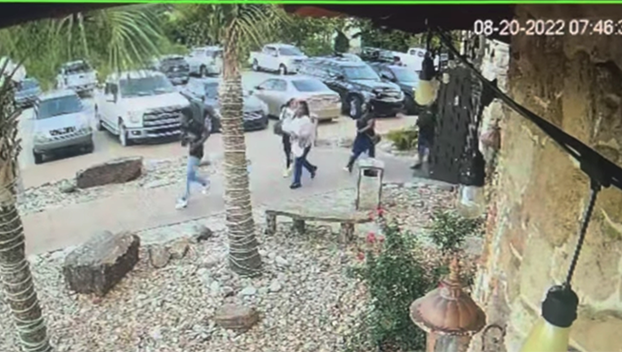 Security footage from El Sombrero in Vicksburg shows a group of diners suspected to have left the restaurant without paying their $128.25 bill on Aug. 20, according to management. (Photo courtesy of El Sombrero)

The Mexican restaurant El Sombrero in Vicksburg has been seeing an increase in customers not paying for meals.

The general manager of the restaurant, Robert Silvera, said that at least once a week the establishment has a dine-in customer leave without paying. He has made several Facebook posts over the past few months showing security camera footage of people leaving the restaurant without paying for their meals.

While the number of customers leaving without paying is frustrating to Silvera, he said an even more common problem is preparing to-go orders that are called in and then never picked up and paid for.

“It’s very, very rare to have one day where we don’t have at least one to-go order that nobody picks up,” Silvera said.

He added that he noticed an increase in unpaid bills that coincided with the COVID pandemic.

“Before, it almost never happened. But after COVID, people started making to-go orders. That’s when it (started) happening more.”

The thefts don’t just hurt the restaurant. Servers at El Sombrero, like many restaurants, make most of their money through tips. Silvera said his waiters are paid by the restaurant at a rate of $2.15 per hour, a little more than the $2.13 minimum required by the State of Mississippi.

Servers are required by law to be paid at least minimum wage, but usually make more than that, and are reliant on tips to cover most of their take-home pay.

“The hourly rate just kind of covers taxes, and then their revenue comes from the actual tips,” Silvera said.

Silvera also said that the customers who aren’t paying are also often more difficult to deal with.

“Mostly, the people who walk out without paying, they request the best service and they’re always complaining about everything,” he said. “They make my waiters work double, and then they don’t pay and they don’t leave a tip.”

Silvera said that for larger parties, he has started to have to ask for one of the party member’s ID and credit card, to insure that he and his servers will be compensated in case anyone from the party decides to not pay their bill.

“It’s not fair to my waiters,” Silvera said. “Because they’re going to lose those tips.”