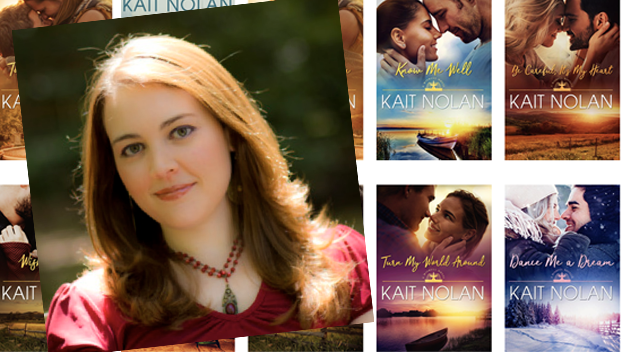 Starkville resident Kait Nolan has been writing since middle school, but in the last decade, she decided to make a career out of her hobby.

She hasn’t looked back since, having sold about 300,000 copies of her works in print, e-book and audio formats.

“It’s that semi-classic story of, ‘I’ve been doing it since I was a kid,’” she said. “When I was 12, in sixth grade, I met my best friend at the time. … We decided we were going to write a book. So, we did it that year in our big, fat three-ring spiral notebook and we just had fun writing every year, aging the characters up as we went along and eventually she said it was not her thing and I was like, ‘Oh it’s mine!’ That was where I got bitten by the bug I guess.”

Nolan, a native of Tupelo, received her undergraduate degree from the University of Mississippi, and then she set off for Starkville to pursue advanced degrees at Mississippi State University.

She was a research psychologist and instructor for MSU. After 15 years, she decided to hang it up entirely in favor of pursuing her true passion full time.

Her first book was published in 2010 when she started a series to gain followers, and it marked the beginning of a series that she would never finish.

“I’m self-published,” she said. “My very first book is no longer in print deliberately. I started in the very early days of self publishing and I was writing paranormal romance at the time. I decided I was going to write some novellas just to start building an audience for the series I was pitching to New York. It got some attention at the time and landed me an agent.”

After a couple of years, Nolan decided pitching New York wasn’t for her.

“When I left that track, I ended up changing genres to contemporary romance,” she said. “So, this series that I had started was never going to be finished and I felt really bad having to tell that to readers, so I took them down.”

While that series never saw an official end, Nolan is now working on the final book of her seventh series, having published more than 50 books under the umbrella of contemporary romance.

“I ended up switching to contemporary because I was extremely burned out,” she said. “I love ‘White Christmas’ with Bing Crosby, it’s my favorite Christmas movie and I watch it every year. I decided, as a palate cleanser, it would be fun to retell the story of ‘White Christmas’ against a stage production of ‘White Christmas.’ That story became ‘Be Careful, It’s My Heart,’ which was the first written book in my ‘Wishful’ series.”

She sets most of her stories in Mississippi, but some branch into surrounding southern states.

She added it was an effort to address preconceived notions that non-Mississippians have about the state.

“I have, over my lifetime, been confronted with a lot of prejudice being from Mississippi,” Nolan said. “People, they don’t know Mississippi. All they know, if they’ve never been here, is the stuff that’s perpetuated on the news. That’s not to say we don’t have problems, we do, but everybody else does too, and so I kind of started this series because I wanted to show the good side of Mississippi to the people who have never seen it before.”

Nolan was the 2018 RITA Award recipient for the Contemporary Romance: Short category for her book, “Second Chance Summer.” The RITA Award, now retired, was the highest award offered by the Romance Writers of America.

“My RITA Award, it was a fluke,” she said. “It was a fluke that I entered. I had a buddy who said I should enter, and that I stood a good chance. I thought they were crazy, but I said ‘OK.’”

Nolan is also going to be part of an Romance Author and Reader Events international book signing event in the spring.

“My first book signing ever is actually going to be in Melbourne, Australia of all places,” she added with a laugh.

Ultimately, writing is a means of escape for Nolan.

“I think my favorite part about writing is also the same thing that I love about reading, it’s escape,” she said. “So much of the world is a dumpster fire, and it’s the thing that I want to give to my readers in the stories. That’s one of the reasons I love romance as a genre because it is an entire genre that is devoted to hope and happy endings.”

She said she is often asked if she’s afraid of running out of ideas.

“I just laugh like a maniac because, no, that’s never ever going to be a problem,” she said. “I am constantly having ideas from literally everywhere all of the time.”