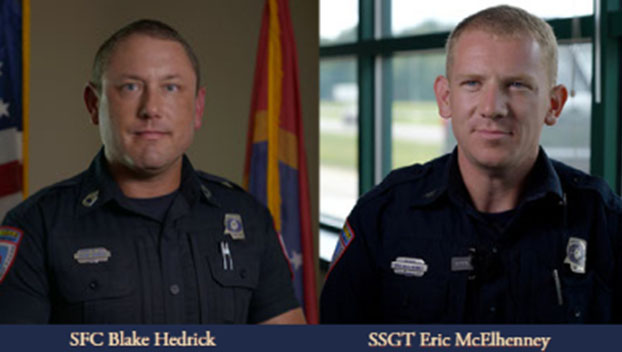 Two officers with the Mississippi Commercial Transportation Enforcement Division are being recognized for their heroic actions that saved the lives of four crash victims.

Sergeant First Class Blake Hedrick and Staff Sergeant Eric McElhenney are being lauded for their actions on Aug. 31, 2022,

According to a post of Facebook, Hedrick and McElhenney swiftly responded to a one-vehicle accident with four women trapped inside north of Union on Highway 15.

None of the four women wore seatbelts, causing them to become entangled between the seats and the floorboard.

Upon arriving McElhenney noticed that one lady was trapped on the floor and was struggling to breathe.

They decided to move the ladies to free the lady trapped on the floor. There were multiple compound fractures and potential internal bleeding in all four women. Two of the ladies had to be airlifted to a hospital, according to the post.

The swift response and decision-making of SFC Hedrick and SSGT Eric McElhenney may have prevented additional injuries and fatalities.

MHP worked the scene and determined that the driver would be charged with DUl.