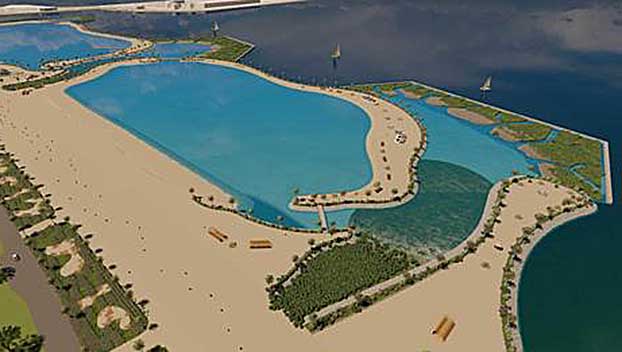 At a meeting of the Harrison County Board of Supervisors on Monday, Kenneth Jones, owner of Gulf Coast Development & Design in Gulfport, detailed the proposal called Clearwater Gulf Coast — a mile-long lagoon — that would also help protect the coast during a hurricane, he said.

“Lots of studies and planning must be done before anything like this can become a reality,” Jones said. “This is only an idea, but the design much be vetted by many agencies and engineers.”

Similar projects are being undertaken in Bayou La Batre, Alabama, and Key West, Florida, he said.

The first step would be to install rock jetties and wave breaks to decrease wave action during hurricanes and other storms, Jones said. The lagoon would be dredged to a depth of 8-to-10 feet (2.4 meters to 3 meters) and the sand would be reused, The Sun Herald reported.

“We’re not trying to get Caribbean water,” he said, but much clearer than the murky water now in the Mississippi Sound.

The proposed site is south of Gulfport’s Westside Park and natural plantings close to U.S. 90 would cut down wind-blown sand onto the highway. The location was chosen because its near Island View Casino, parking, shops and restaurants in the city’s downtown corridor, he said.

Jones said he and his business partner, Andy Phelan, have already met with the Department of Marine Resources, the Army Corps of Engineers and others to devise the proposal which would cost an estimated $22 million.

Supervisor Beverly Martin said during the presentation “$22 million for one mile — I love the idea, but it’s just expensive.”

Jones identified several potential sources of funding for planning and building the lagoon including GOMESA funds that come to South Mississippi from offshore oil contracts and BP Restore Act funds that were to be dedicated to “transformational” projects on the coast. Supervisor Marlin Ladner said the only feasible way to pay for such a project would likely be to dedicate funds annually to repay a bond.

Supervisor Connie Rockco said she and Martin next week will attend the Gulf States Counties and Parishes Caucus in Corpus Christi, Texas, to present details of the proposal to see if there is interest.