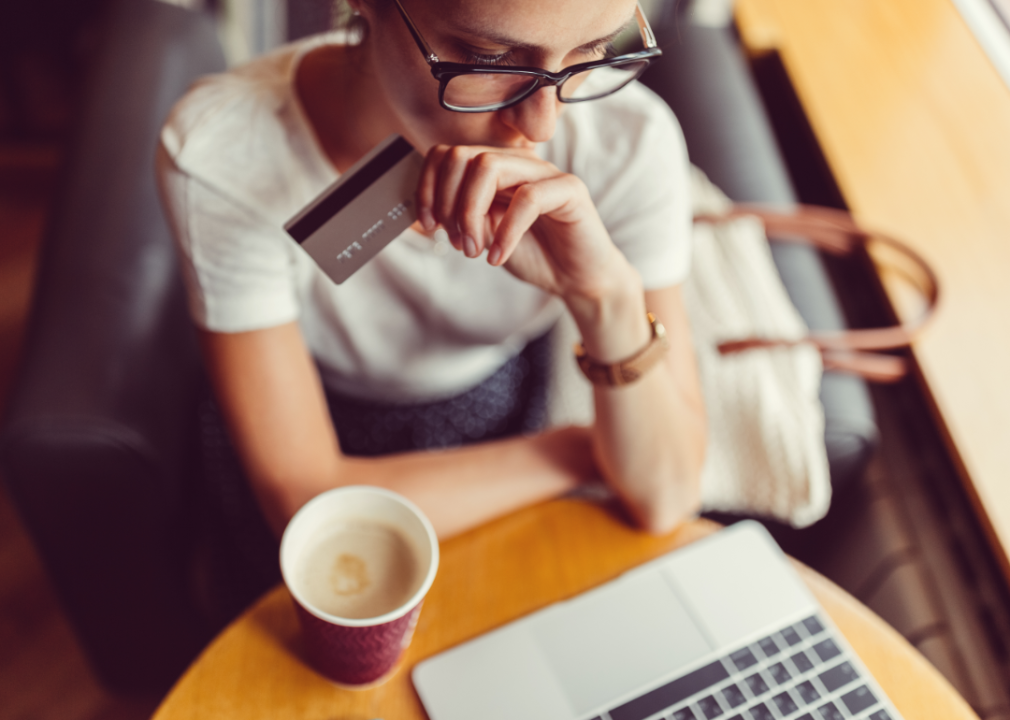 To better understand how credit card use compares across generations, Experian analyzed spending habits among different age groups using data from the first quarter (Q1) of 2022—the most recent data available. As it turns out, it’s older generations that have been able to pay down more credit card debt in recent years. The Silent Generation, born from 1928 to 1945, and baby boomers, born from 1946 to 1964, also have the highest average credit scores of any generation.

But nobody uses credit like Gen Xers, who are entering or already in their peak earning years. Born between 1965 and 1981, they have carried an average credit card debt of $7,000 since the beginning of the pandemic.

All adults under the age of 42 are accounted for among millennials and Generation Z—the oldest members of Gen Z are turning 25 this year and the oldest millennials are turning 41. It’s these younger Americans whose average credit card debt has increased the most compared to other generations over the past two years.

Read on to learn more about which U.S. consumers are carrying the most credit debt—and how credit card habits change across generations. 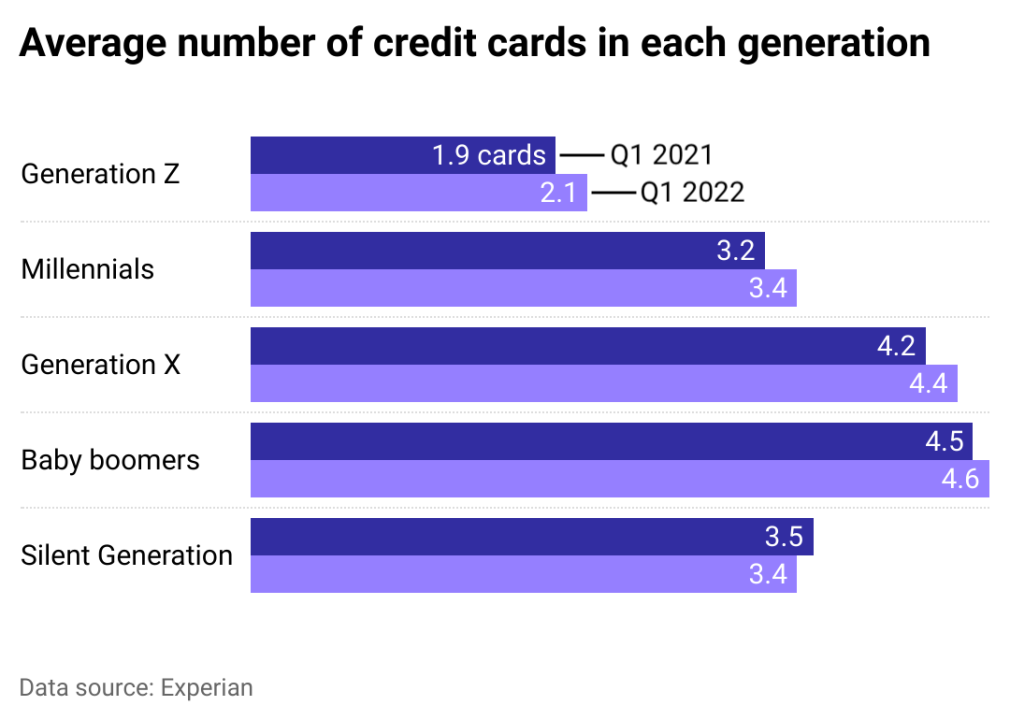 Baby boomers, Gen X have most credit cards on average

Americans who have reached middle age or older—Gen X and baby boomers—hold the most credit cards, with an average of more than four per person. Members of Gen Z held just half that—among those old enough to have credit cards, that is. (Gen Zers are ages 9 to 25 this year.) The youngest adult consumers, ages 18 to 25, had an average of two credit cards each, with only a slight increase from 2021 and 2022. 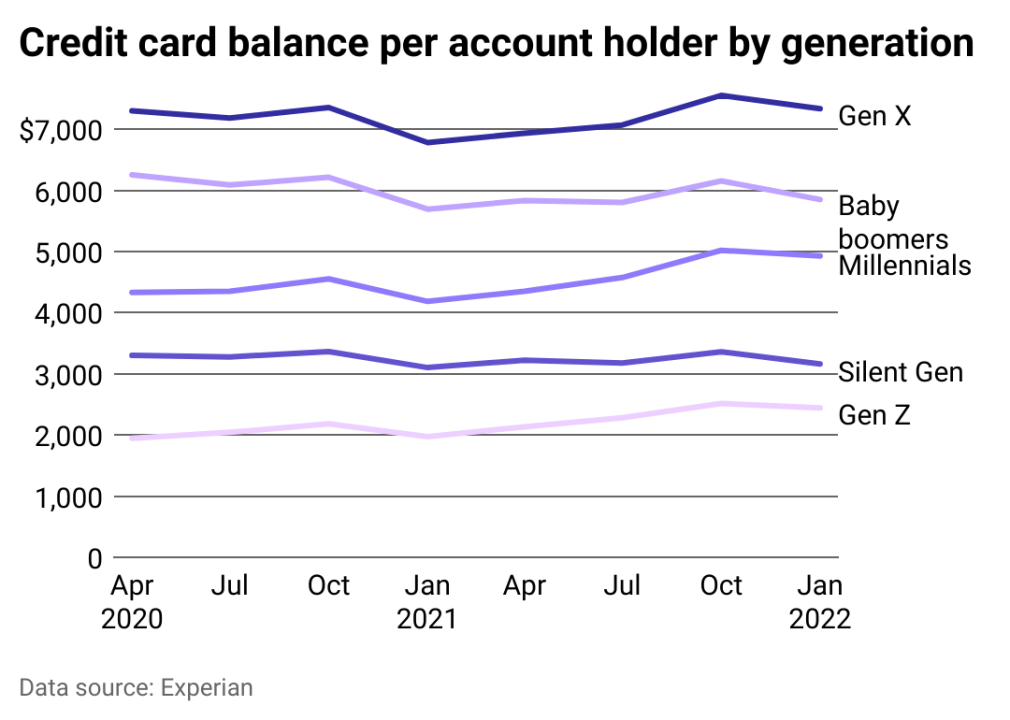 Since the start of the COVID-19 pandemic, the credit card debt for Gen Z and millennials has grown at a faster rate than other generations.

The oldest Americans—the Silent Generation and baby boomers—paid down credit card debt over those two years in large enough numbers to drive their average balance down. Baby boomers saw their average credit card balance decline more than 6% from April 2020 to January 2022, and the Silent Generation’s average balance declined more than 4% during that same period. 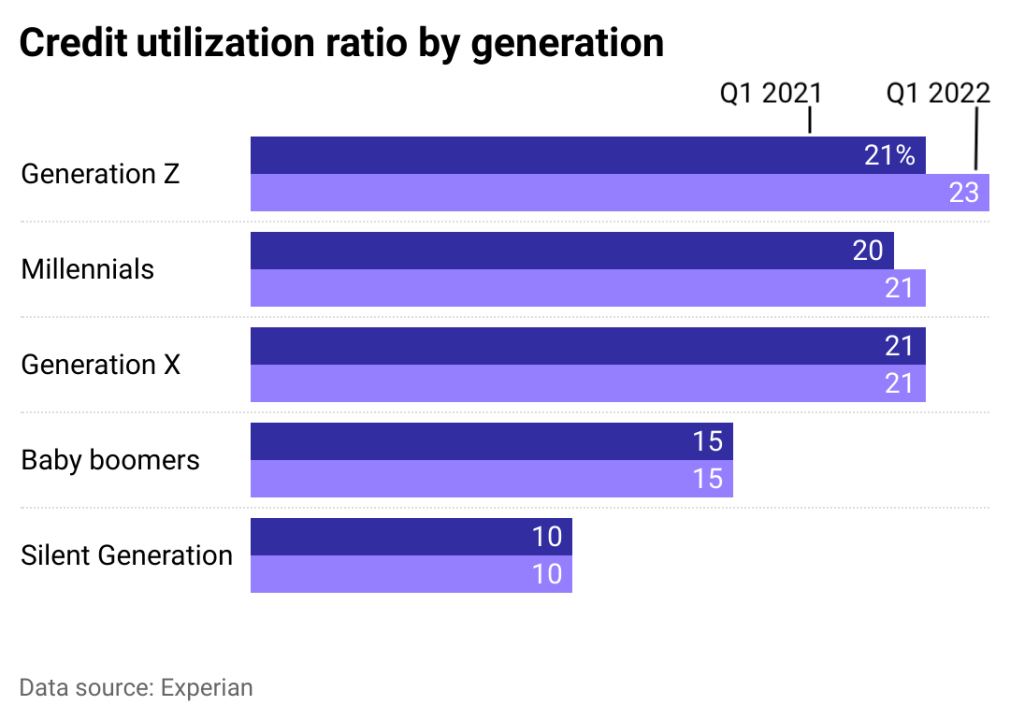 Looking at credit utilization, which measures credit card balances against credit limits, baby boomers and those in the Silent Generation use the least amount of their available credit on average compared with other generations. Because these consumers have had many more years to accrue savings and build credit histories on average than younger generations, they often enjoy more financial security and have the benefit of higher credit limits.

In Q1 2022, Gen Z used 23% of their available credit, which is the highest average utilization rate of any generation. Having less experience and time to build their credit history, members of Gen Z have lower credit scores on average and are more likely to have lower credit limits as well. 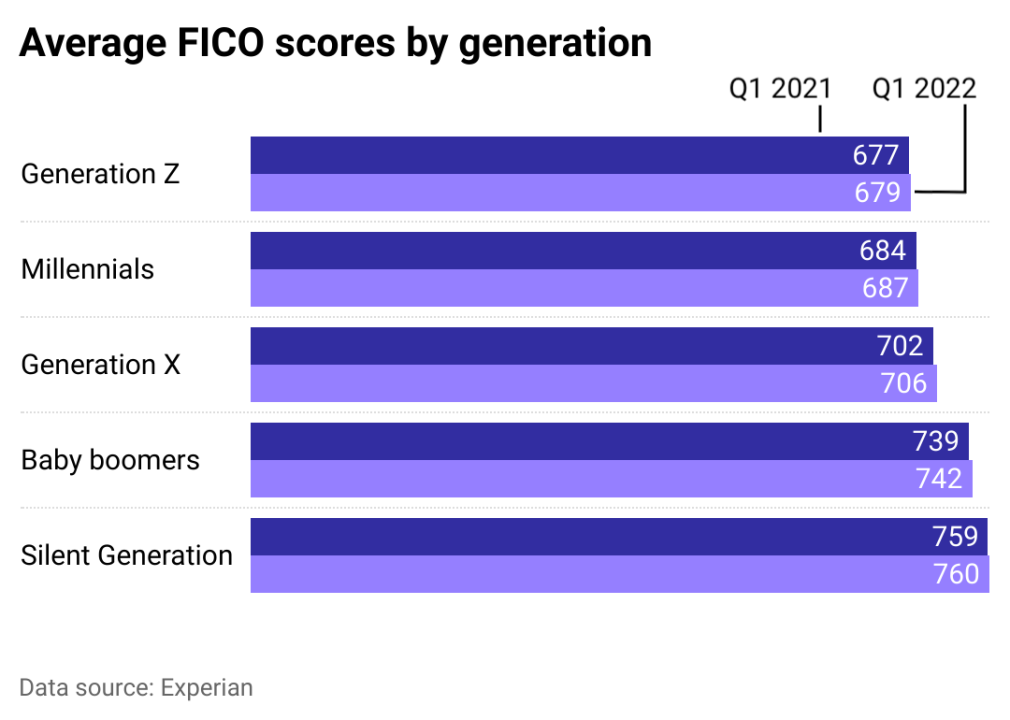 Whether a recent college graduate or preparing for retirement, consumers saw their FICO Score averages increase slightly between Q1 2021 and Q1 2022.

The older the credit account holder, the higher their FICO Score tends to be on average. Baby boomers and the Silent Generation have had decades longer to establish their payment history, length of credit history, and different types of credit accounts, among other financial activities that are noted in a person’s credit report. Baby boomers and the Silent Generation boast average FICO Scores higher than the national average of 714, according to Experian.