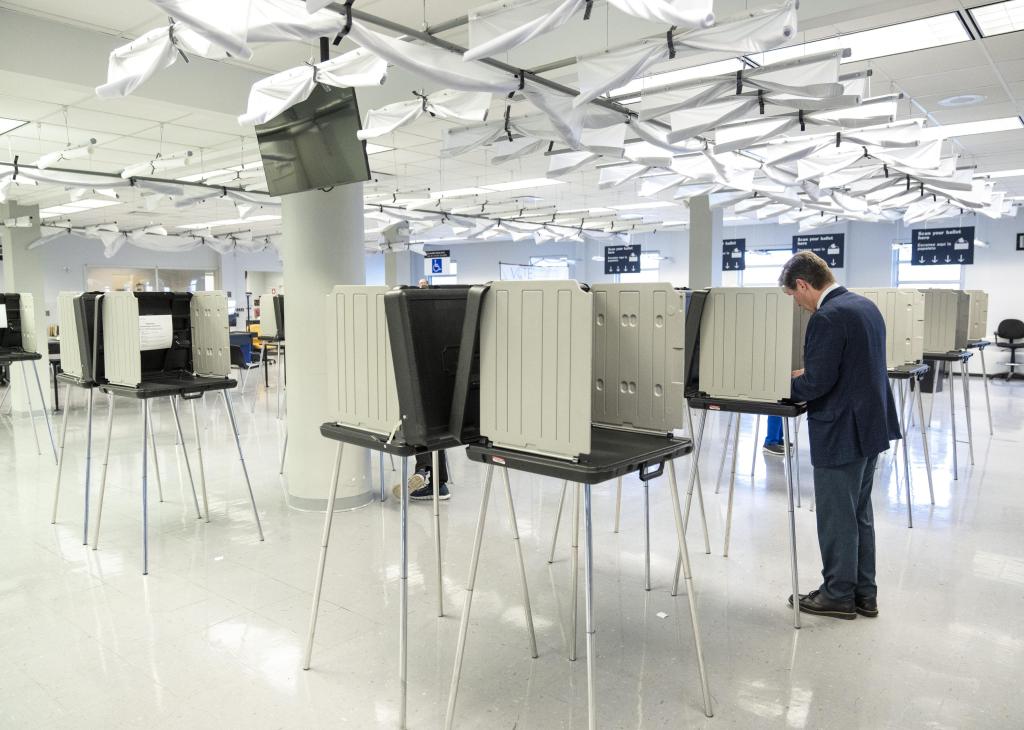 As the 2022 midterm elections approach, pundits, political organizers, and the general public alike are wondering the same thing: Will people actually turn out to vote on Nov. 8?

Stacker examined U.S. Census data to find which states had the lowest voter turnout in the 2018 midterm elections and investigated the factors impacting turnout. The Census measures voter turnout by calculating the percentage of voting-age citizens in each state who cast a ballot. In the event of a tie, the raw number of participating voters was used. However, not all citizens of voting age are eligible to vote; felony disenfranchisement laws, in particular, can alter the number of voting-age citizens who are actually able to cast a ballot.

Voter turnout at midterm elections is famously fickle. In most years, voter participation is significantly lower for midterm elections than for presidential elections. However, turnout during the most recent 2018 midterm cycle proved astonishingly high, jumping a full 11 percentage points from the previous midterm alone. Turnout can be difficult to predict, but this year, the prevalence of deeply polarizing issues such as abortion, gun control, and economic instability suggest that 2022 midterm turnout could be higher than usual. Understanding why turnout was higher than usual in 2018—as well as why some states lagged behind in voter participation—can offer insight into what to expect in the upcoming election.

Midterm elections take place every four years, halfway through the sitting president’s term. The entirety of the U.S. House and one-third of the Senate are up for election, as are many local and state-level positions. Despite unusually high turnout in the 2018 elections, some states’ voter turnout rates were significantly lower than the national average. Voter turnout can be impacted by a variety of factors, such as noncompetitive or low-profile races and disillusionment with the electoral process. Systemic barriers to voting also impact people’s ability to vote. The ability to vote easily has been shown in most cases to correlate with higher voter turnout, just as states with restrictive voting laws often see lower turnout rates.

Laws that impede people from voting easily include voter identification requirements, which require voters to provide a form of government ID in order to vote, voter registration deadlines far in advance of elections, and felony disenfranchisement laws, which prevent people serving felony sentences—and sometimes those who have already completed their sentences—from voting. Other measures, like complex absentee ballot processes, improper voter purging, and crackdowns on voter assistance, create more barriers to voter participation.

And some groups are more impacted by restrictive measures than others. In March 2022, the Biden administration released a report detailing the systemic barriers Native Americans face when trying to vote, including language barriers, limited access to polling places, and a lack of Indigenous representation in the electoral process. Black Americans are also disproportionately affected by voter suppression, in part through felony disenfranchisement laws that have their roots in a Jim Crow-era scheme to prevent Black Americans from voting.

Despite the challenges, voting is one of the pillars on which democracy stands and is one of the most fundamental ways Americans can have their voices heard. Stacker is releasing this story as part of a project called Democracy Day, in which newsrooms across the country are drawing attention to the importance of protecting our democracy and the threats it currently faces.

Read on to see which states had the lowest voter turnout during the last midterm cycle.

You may also like: Gun control legislation that passed and failed over the last 20 years 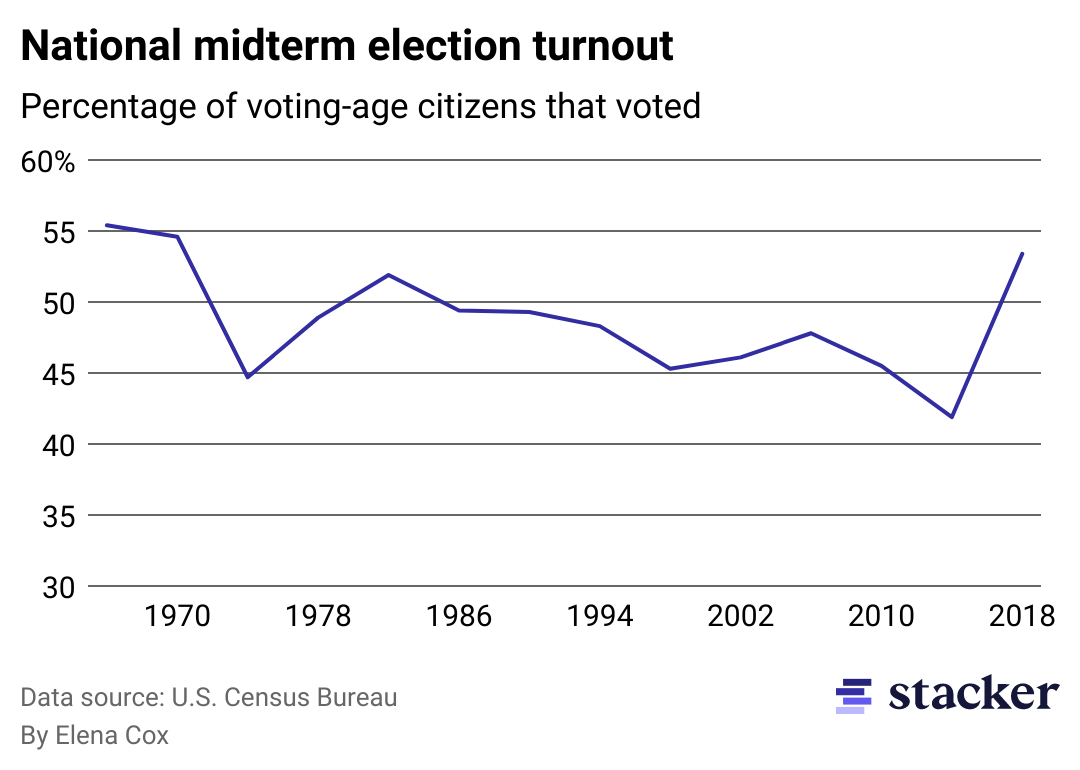 Voter turnout in the 2018 midterms was historically high across the country, with more participation than in any other midterm election in over four decades. The jump is even more pronounced considering the 2014 midterms garnered infamously low turnout, with significant downturns in participation in highly populated states like New Jersey, New York, and California. More than half of voting-aged Americans turned out for the 2018 election, a stark turnaround from the roughly one-third who cast ballots in 2014.

The increase in voter turnout carried across racial and ethnic groups, with Latino voter turnout almost doubling between the 2014 and 2018 midterms. Reasons for the elevated turnout have been attributed to an intensified interest in voting—from both parties—due to the polarizing nature of the Trump administration and the many hot-button issues Americans were (and are) facing. Another factor impacting the 2018 midterm cycle was the record number of congressional Republicans who did not seek re-election. Since House incumbents win re-election at rates much higher than those not already in office, Democrats had an edge in that election cycle. 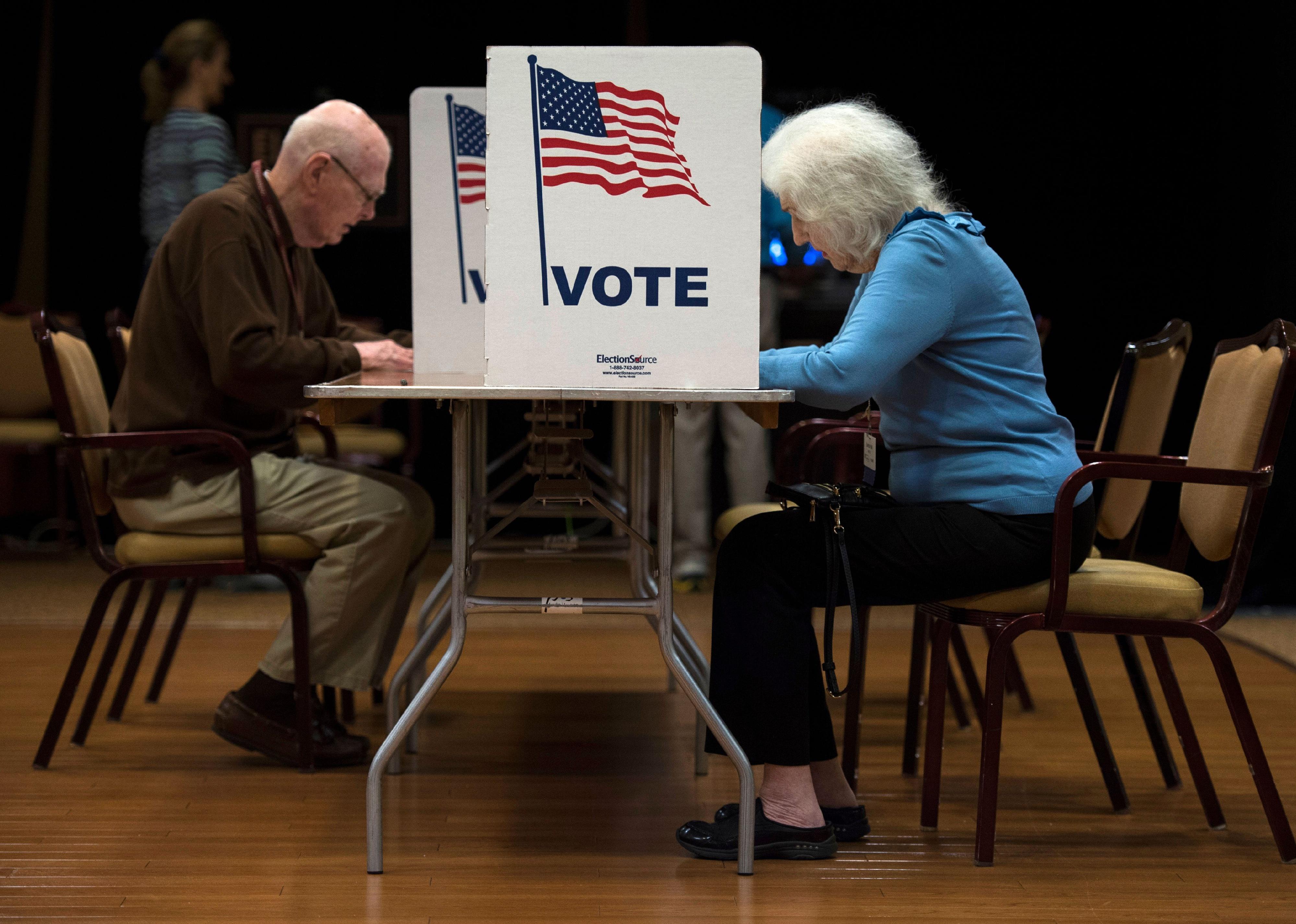 Despite higher-than-usual voter turnout in Oklahoma’s 2018 midterms, the state’s turnout still ranks low compared to the rest of the country. Oklahoma’s restrictive voting legislation, which includes a voter identification law and a voter registration deadline that is 25 days before election day, creates barriers to voting. Efforts to implement online voter registration have stalled since 2015 due to outdated technology, resulting in voters being required to mail registration forms or deliver them in person. Online voter registration is commonplace in most of the U.S., with 42 states and Washington D.C. allowing it. 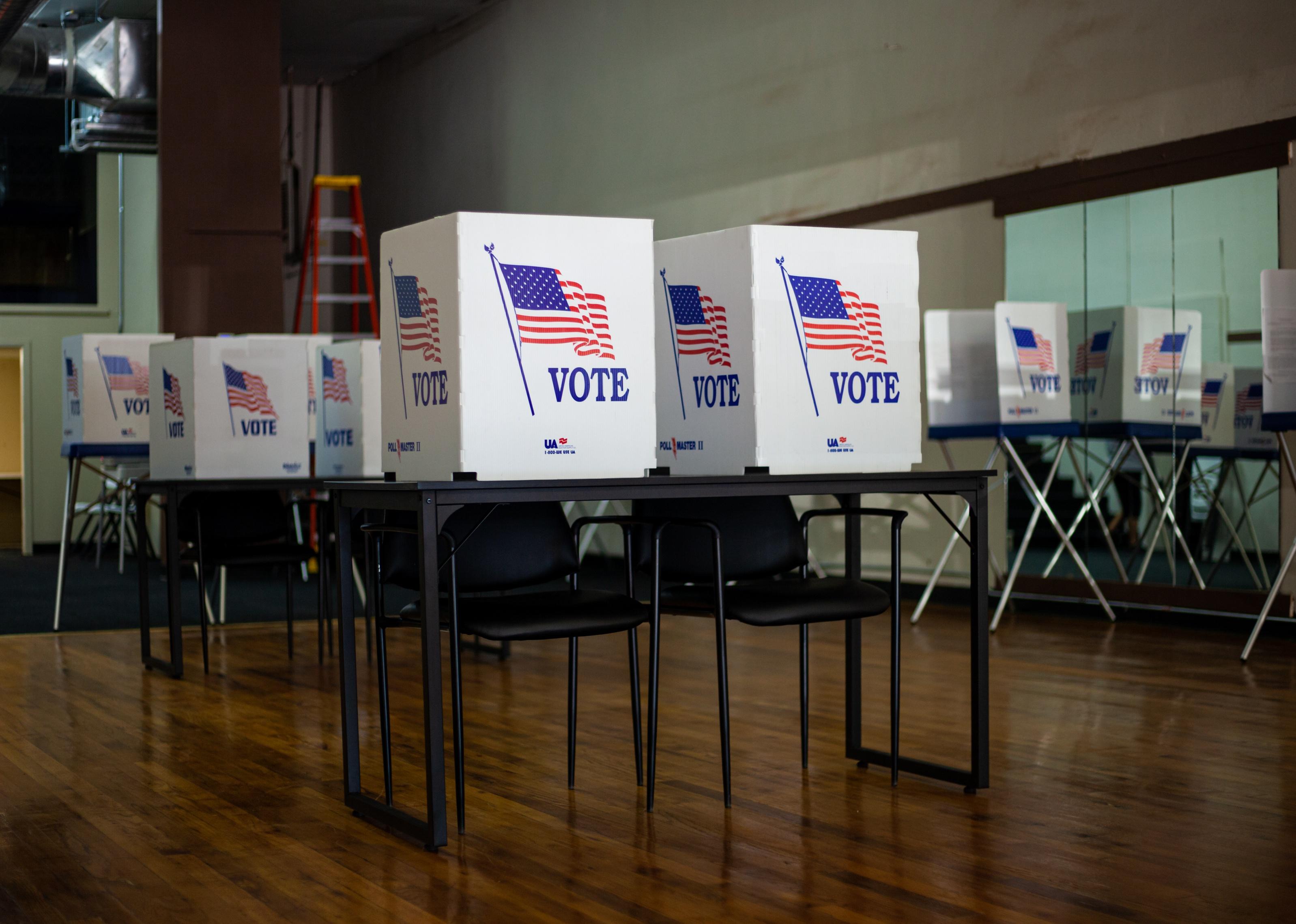 Voter turnout in Indiana’s 2018 midterms exceeded 2014’s numbers, despite some issues at several polling places in the state. Problems included malfunctioning voting machines and not enough paper ballots. In the county of Porter, a judge ordered 12 polling places to stay open later than planned after poll workers failed to show up, forcing them to open late. Indiana’s stringent voting laws have only become more restrictive since 2018.

In addition to the state’s long-standing voter ID laws, Indiana passed measures in 2019 to shorten the amount of time voters have to request an absentee ballot, and also tried to prohibit voters from requesting that a polling place stay open longer if there were issues there (this latter measure was later struck down by a federal judge). The state also resisted popular mail-in voting measures after the onset of the COVID-19 pandemic in 2020.

One of the most closely watched races in Indiana’s 2018 midterms was the Senate contest between incumbent Democrat Joe Donnelly and Republican Mike Braun. Keeping Donnelly, a fairly conservative Democrat, in his Senate seat was crucial for the Democrats’ hopes of winning a Senate majority. Braun, a Trump-backed candidate, ultimately defeated Donnelly. 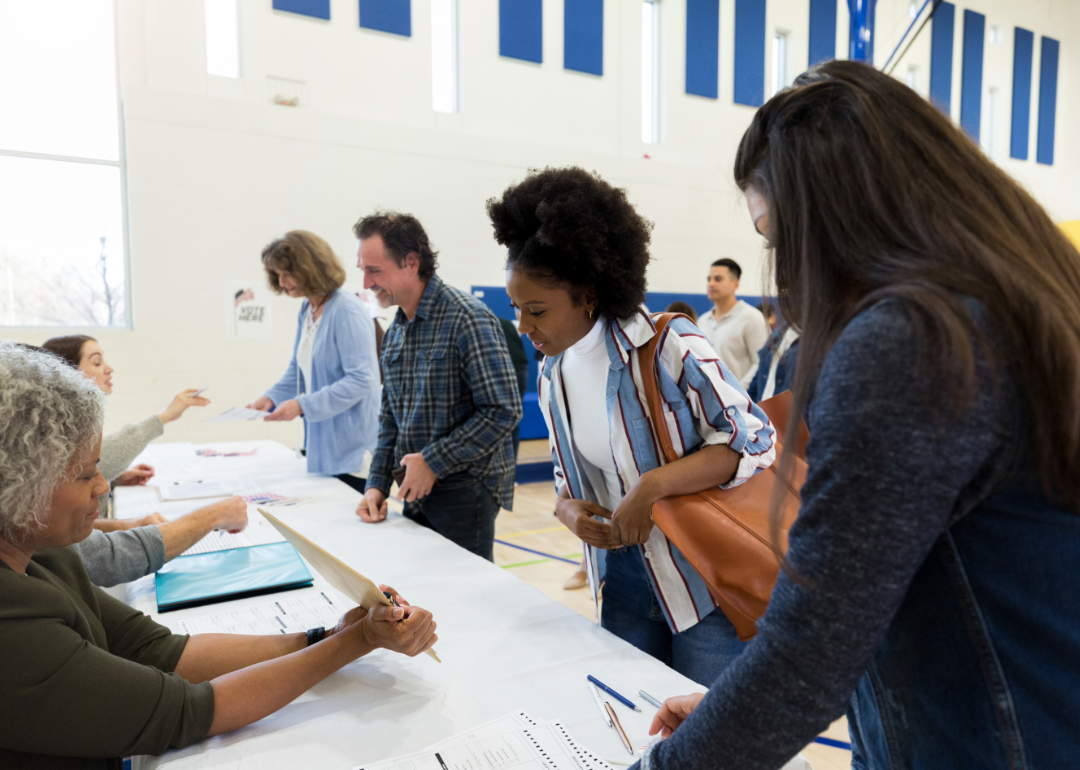 Voter turnout was unusually high for the swing state—with numbers more similar to the turnout for the 2016 presidential election than the 2014 midterm—though Nevada’s turnout is relatively low compared to the national average. In the time between the 2018 midterm elections and the upcoming midterm, however, the state expanded voter access by implementing automatic voter registration and same-day voter registration. Nevada also offers online voter registration. 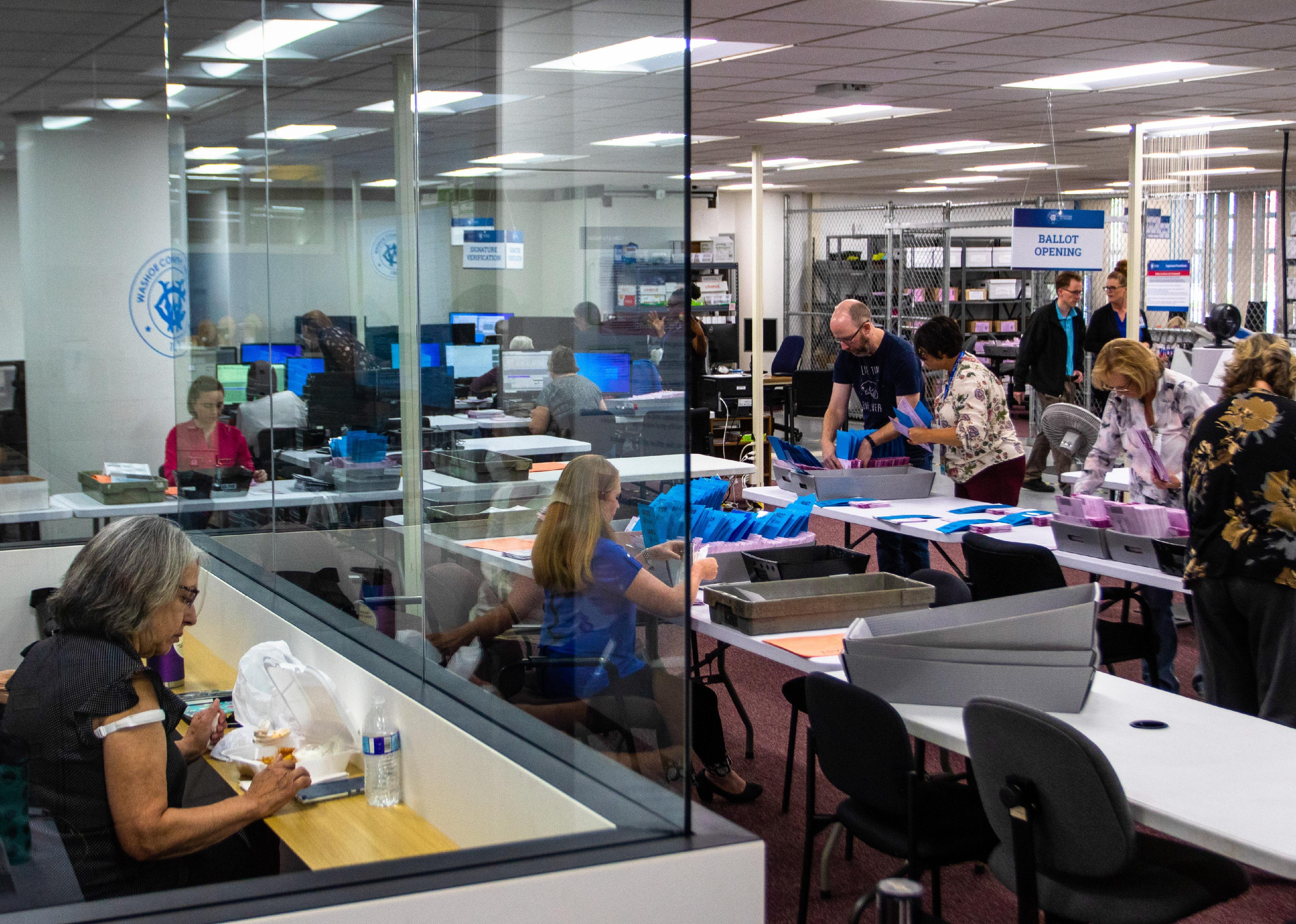 A prominent governor’s race in South Carolina’s midterm elections drew both local and national interest after former Gov. Nikki Haley was appointed to the role of U.S. ambassador to the United Nations, leaving her post open. Her former lieutenant governor, Republican Henry McMaster, defeated his Democratic challenger James Smith with the help of an endorsement from Trump. Both Trump and Joe Biden campaigned in South Carolina on behalf of their respective picks. Restrictive voting legislation has created barriers to voting in the state, including voter identification laws, prohibiting voter registration after 30 days prior to an election, and felony disenfranchisement laws. During the COVID-19 pandemic, South Carolina changed rules around absentee voting to expand mail-in voting access without requiring an excuse. 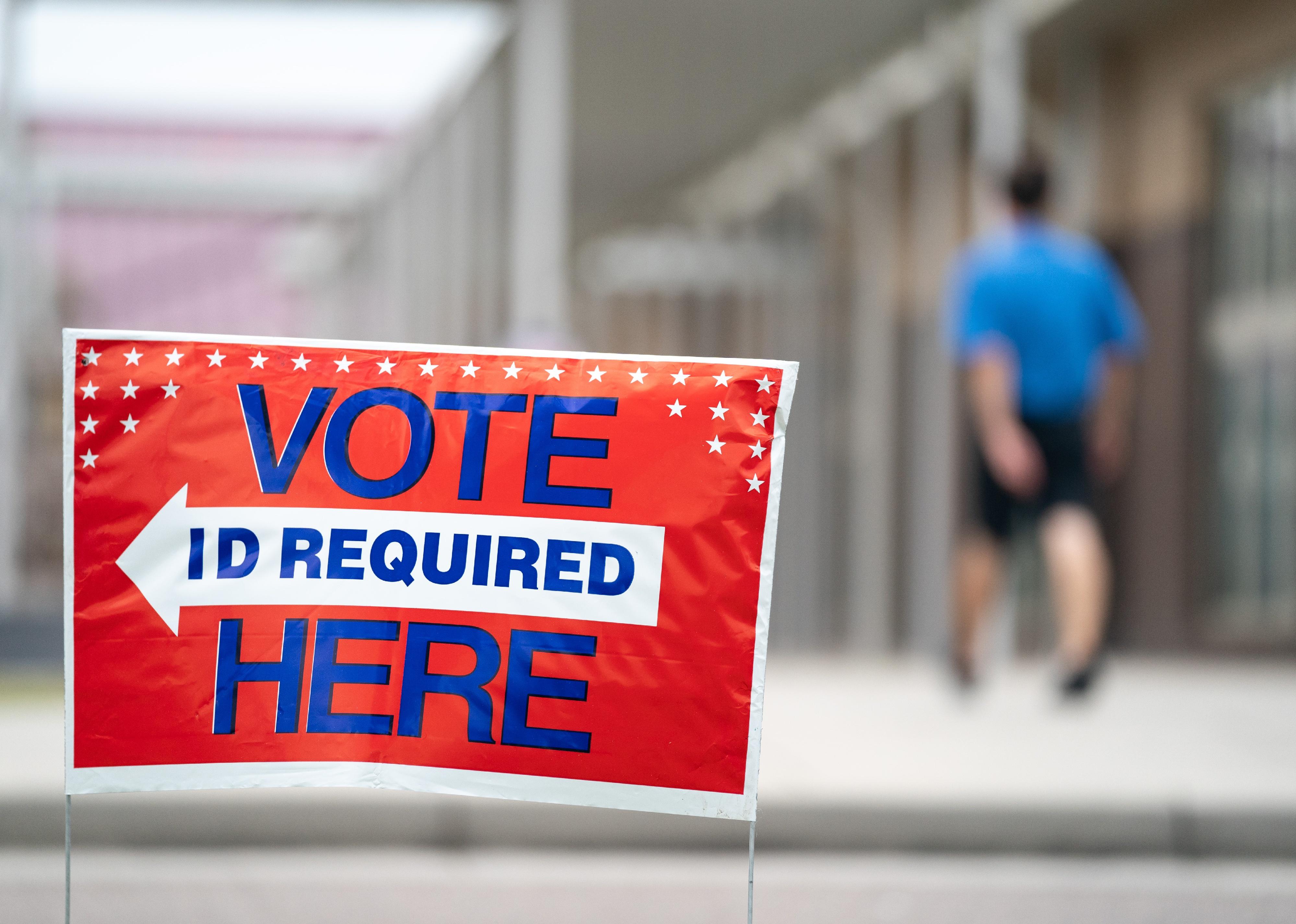 A 2020 analysis from Northern Illinois University found that Texas had the most restrictive voting processes of any state, making it the most difficult state to vote in. Restrictions include voter ID requirements, a voter registration deadline 30 days prior to election day, and inadequate voter materials provided in Spanish (a provision mandated by the Voting Rights Act). In 2021, a federal judge struck down several parts of a new Texas law that aimed to restrict voting access further. Among the provisions that violated the Voting Rights Act was one that would have limited assistance for voters for whom English was not their first language and for voters with disabilities.

You may also like: Can you solve these ‘Jeopardy!’ clues about U.S. presidents? 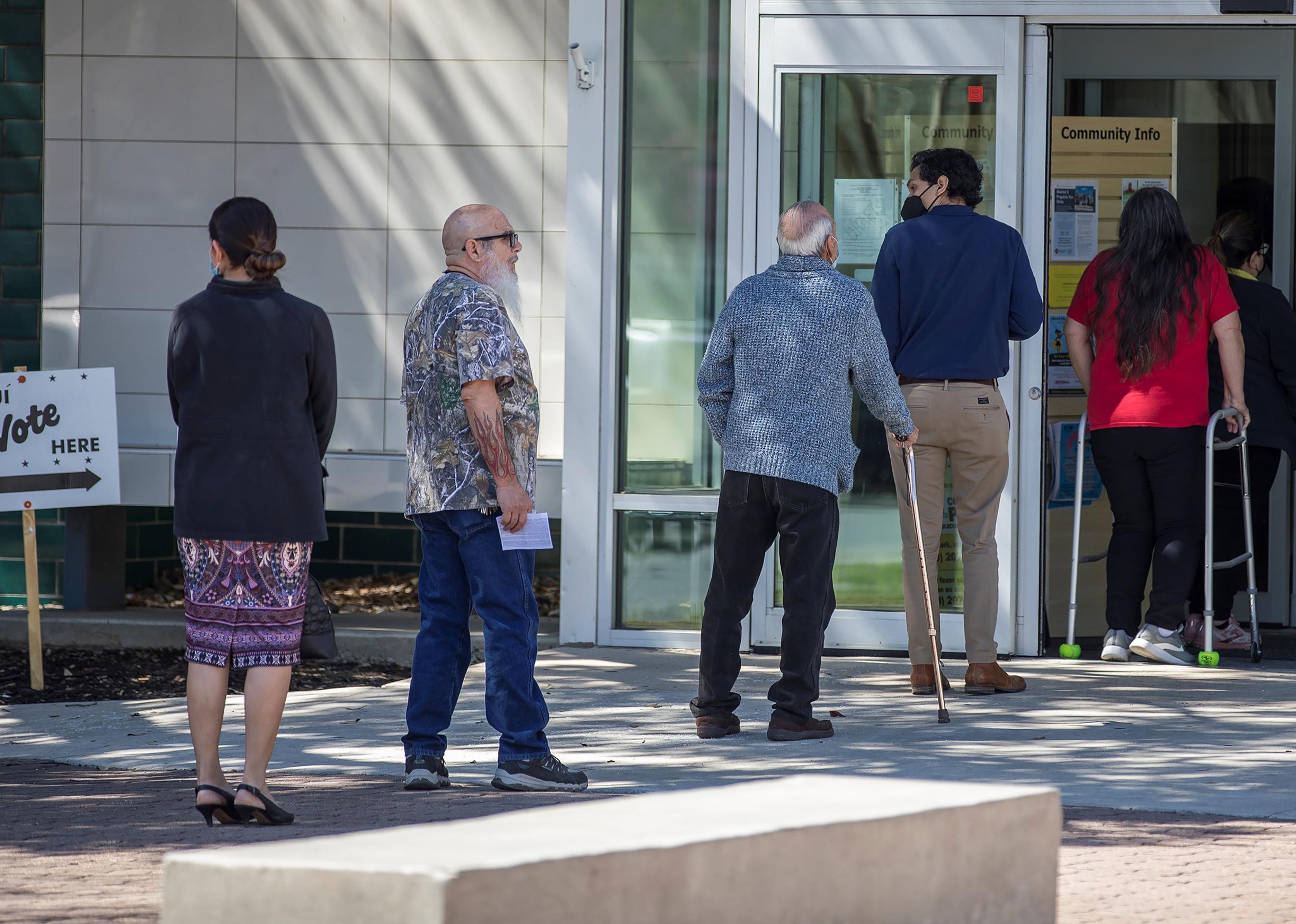 Since the 2018 midterm elections, Democrats have sought to expand voting access by implementing same-day voter registration and mailing absentee ballot applications to all eligible voters. However, barriers to voting persist, disproportionately impacting Indigenous communities and those convicted of felonies. In early 2022, lawmakers introduced a bill that would, if enacted, make Election Day a holiday and make voter registration easier, among other provisions. 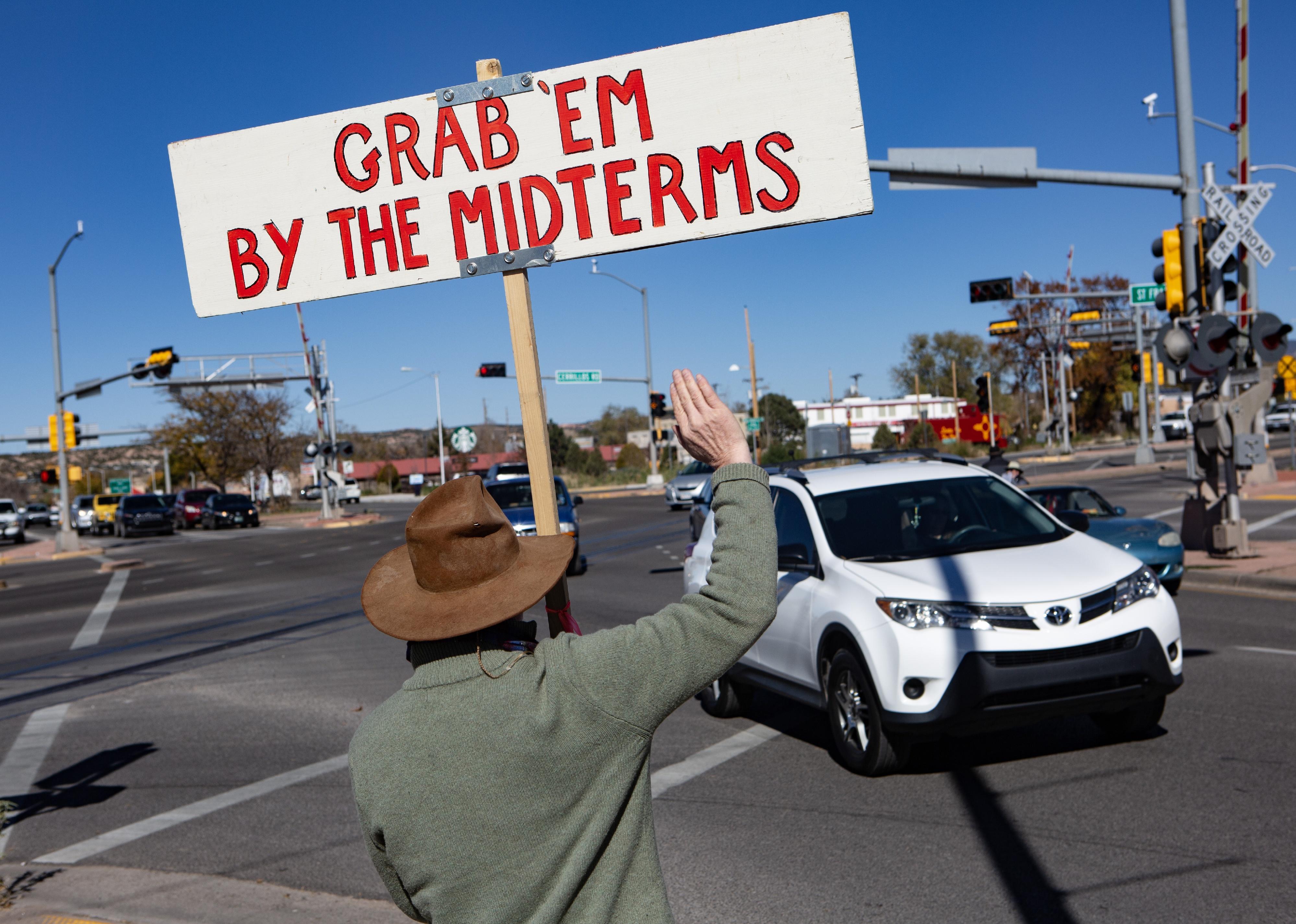 Midterm races in Idaho did not attract much national attention due to a general lack of competition in the red state. The retirement of longtime Republican Gov. C.L. Otter left the governor’s seat open, a spot which Republican Brad Little won by a large margin. Republicans also dominated other races, winning control of both House seats, and the lieutenant governor and attorney general posts. In February 2022, Idaho House Republicans passed two bills outlining several voter restrictions, including one which, if passed by the Idaho Senate, would prohibit unaffiliated voters (roughly one-third of Idaho’s voters) from voting in the Republican primary. Another would outlaw delivering absentee ballots for other people, a measure that would disproportionately impact people with disabilities and working people. The two associated bills were defeated in the Senate one month later. 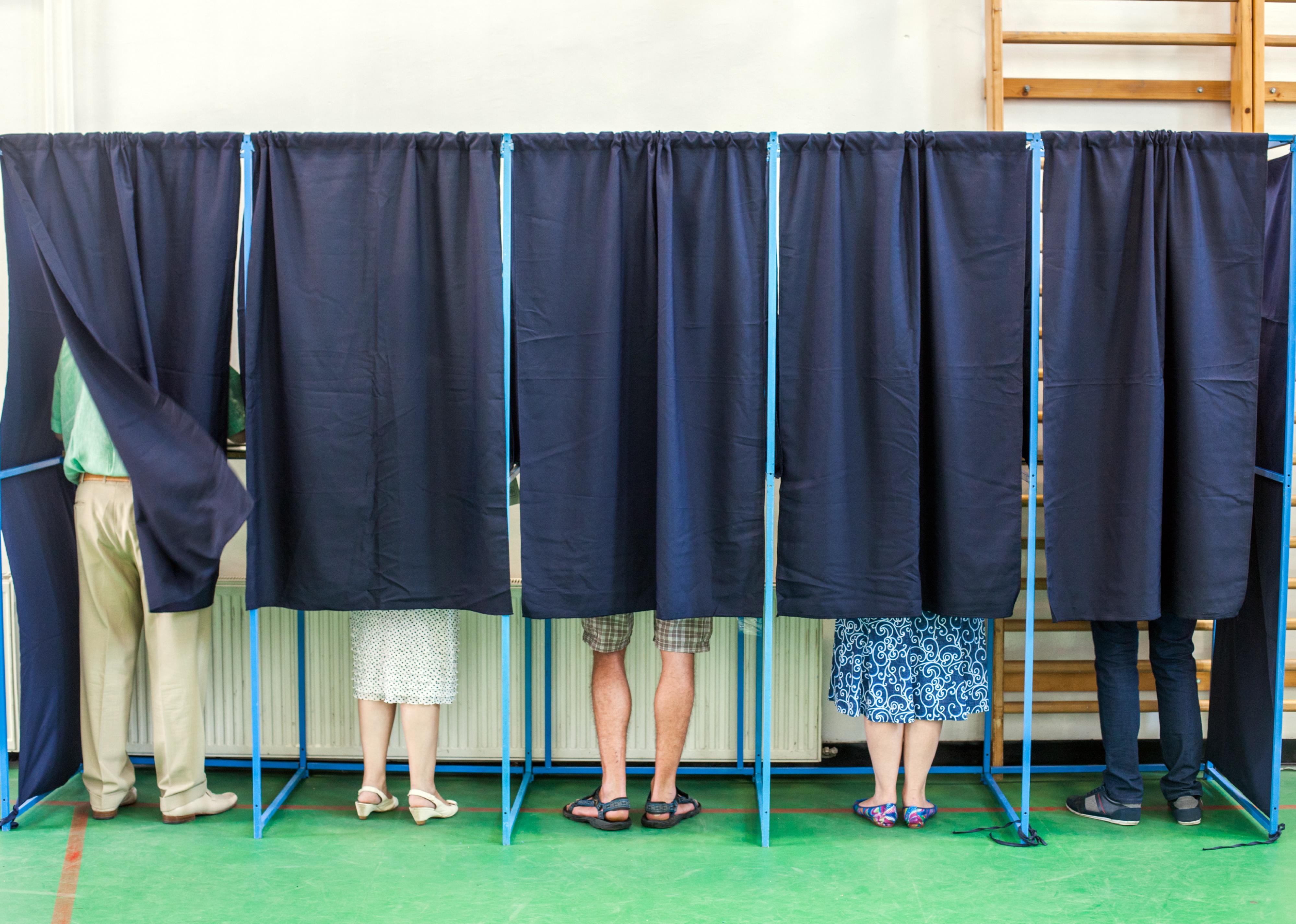 The 2018 West Virginia Senate race saw conservative Democratic incumbent Sen. Joe Manchin III face off against Republican Patrick Morrisey, winning re-election in an increasingly red state. Manchin’s support for the National Rifle Association, coupled with his vote in favor of conservative Justice Brett Kavanaugh—his being the only Democratic vote—has earned him the reputation for being the most conservative Democrat in the Senate.

Barriers to voting in West Virginia include voter ID requirements and a 21-day deadline for registering to vote. Though automatic voter registration legislation was passed in 2016, its enactment remains delayed. During his 2016 campaign, West Virginia Secretary of State Mac Warner, a Republican, promoted an antisemitic conspiracy theory claiming that Jewish philanthropist George Soros was behind the automatic voter registration law and was using it to unlawfully register “more voters for the Democratic party,” according to The Associated Press. 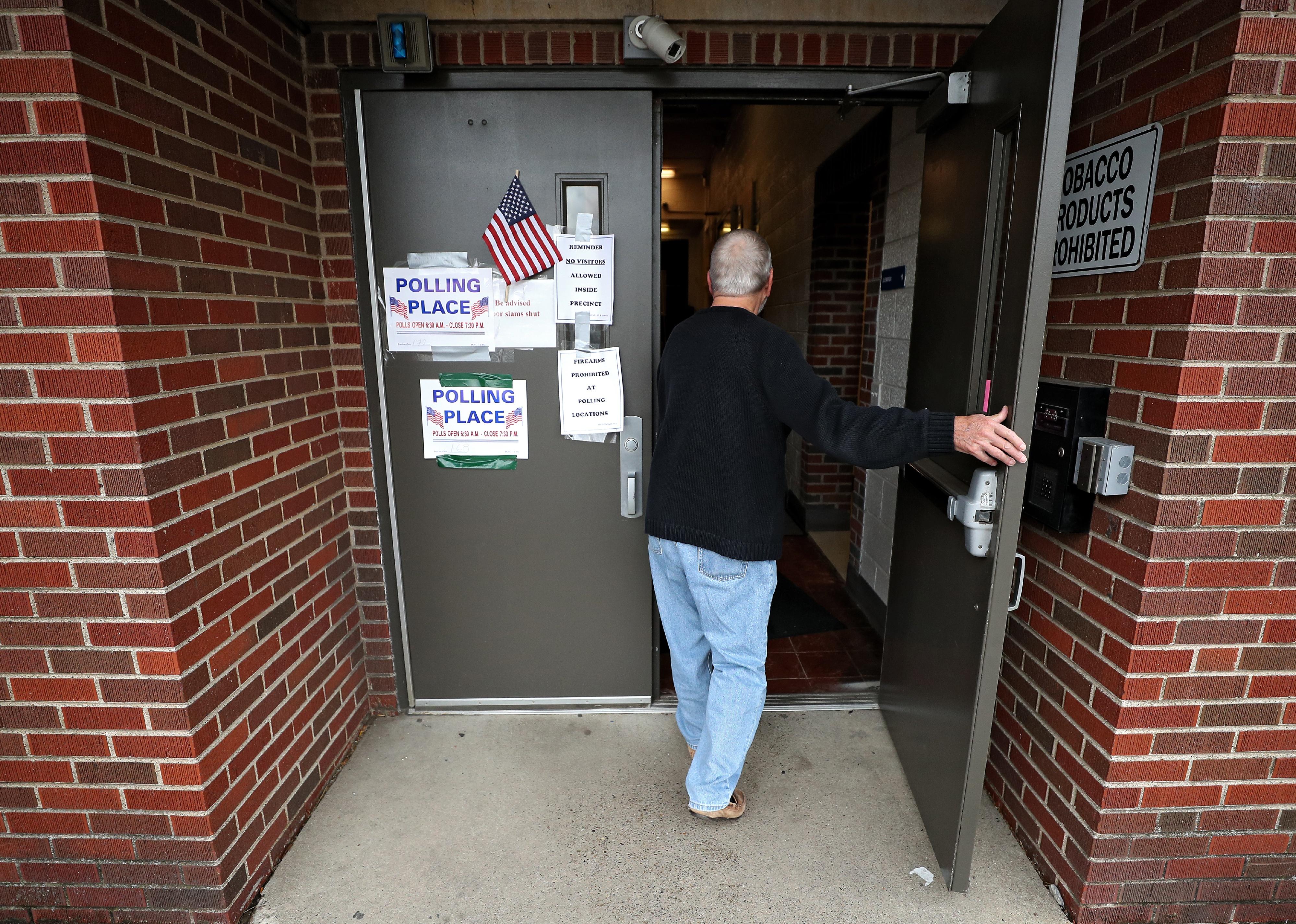 Hawaii’s 2018 midterm elections resembled most other elections in the state’s history: Democrats easily won nearly every race. But in spite of this electoral predictability—or, according to some political activists, because of it—Hawaii is reliably among the states with the lowest voter turnout. Though the state has enacted legislation that makes voting easier, including mailing ballots to all registered voters, automatic voter registration, and same-day voter registration, low voter participation has persisted. Native Hawaiians have historically been disenfranchised, most recently through felony disenfranchisement laws, as felony convictions in the state disproportionately impact Native Hawaiians. And while the vote-by-mail system gets ballots into the hands of those with stable living conditions, people experiencing homelessness are at a disadvantage when it comes to voter participation. 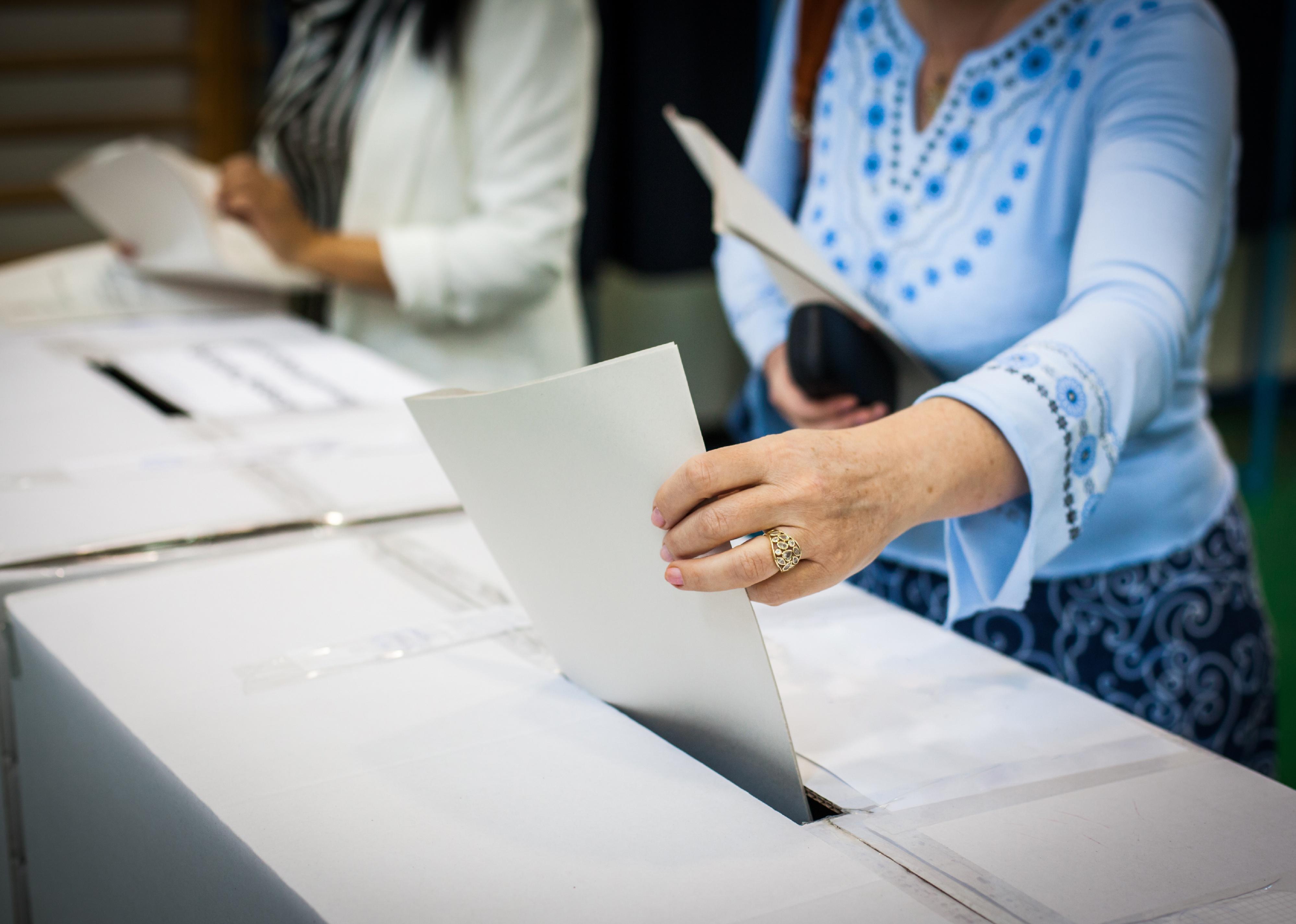 Republican Gov. Asa Hutchinson won re-election in the 2018 Arkansas gubernatorial race against his opponent, Democrat Jared Henderson. Republicans also dominated other races, capturing all four House seats. The state with the lowest voter turnout in the 2018 midterm elections, Arkansas has restrictive voting laws in place that create barriers to voting, including voter identification requirements and a several-week voter registration deadline.

Furthermore, Arkansas rejected mailed-in ballots at the highest rate in the nation during the 2020 election, throwing out 6.4% of absentee ballots, compared to the national average of less than 1%. In 2022, several new measures aimed at further restricting voter access were challenged by voter rights groups in court. One measure so far was found to have violated the Voting Rights Act, according to a federal judge. The law limited in-person assistance to people casting ballots, a measure that disenfranchised people with disabilities and those with limited English proficiency.