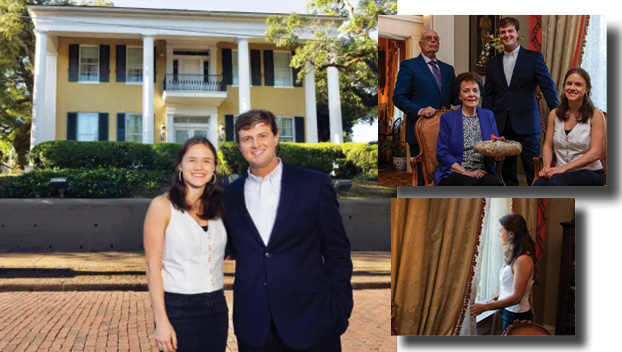 A historic mansion that survived the Civil War siege of Vicksburg and was the site of one of Jefferson Davis’ last public speeches has been sold to a young Mississippi couple devoted to preserving the house’s legacy.

Vicksburg’s first tour home and columned mansion is under new ownership for the first time in more than 20 years.

Anna Kate Doiron and Sam Andrews, both sixth-generation Vicksburgers, have purchased Anchuca Historic Mansion and Inn from Tom Pharr. The sale was made possible through a financing agreement between the couple, Pharr, and Delta Bank of Vicksburg.

“Preserving and enhancing Anchuca has been my top priority for the last two decades,” Pharr said. “I believe they are the right couple to continue this effort as I’ve seen firsthand their appreciation for the history of this property and the surrounding neighborhood. I know they will be excellent stewards of its success.”

The couple said all current offerings of the business will remain the same.

Andrews said he has great respect for Pharr’s successful revitalization efforts, calling him not only an advocate but a catalyst for investment in Vicksburg’s National Register Historic District. Andrews said he remembers when Pharr announced his concept for traditionally styled, new homes in the city’s oldest neighborhood.

“When Tom described his plans to build small homes on available lots in the most historic part of Vicksburg, all in close proximity to Anchuca, I was immediately interested,” Andrews said. “While the outside of each home was designed to compliment the historic neighborhood, the inside included modern conveniences and a functional floor plan.”

Nearly 12 years later, Andrews and his fiancée not only own one of those new homes envisioned by Pharr, but also the historic mansion where the idea was born.

“From getting engaged here nearly a year ago to time spent with family and friends, Anchuca has been one of the best parts of our lives together in Vicksburg,” Doiron said. “Sam and I couldn’t be more excited to call it our own and continue sharing it with visitors from all over the world — it was an opportunity we couldn’t resist.”

Before moving back to Vicksburg, Pharr lived in Atlanta, Ga., where he started his own architectural and interior design business with a wide range of clients, including music legends L.A. Reid, Toni Braxton and Sean “Diddy” Combs. When the opportunity arose to purchase Anchuca in 2001, the 37-year-old Pharr found himself in a “full-circle” moment, as he had worked there as a teenager. Pharr said he believes that his early experience and the many interesting people he met there helped inspire him to choose his original career path.

“As a young kid, all I could think was that I wanted to move away and see the world, which I did,” Pharr said. “What I didn’t realize at the time was that Anchuca would bring me home and then bring people from all over the world to me so I could share Vicksburg’s unique story with them.”

During his time as approximately the 10th owner of the 192-year-old home, Pharr has impeccably maintained and enhanced the property, bringing Anchuca into the digital age and adding the Garden Room to accommodate more events and dining space, creating a special place for the local community to enjoy as well.

Pharr credits his successful tenure of ownership with incredible support from his family, especially his mother and sister; many generous friends who shared their time and talents; and the wonderful staff, as well as faithful patrons and the local community. Moving forward, he plans to continue his design work and further develop Vicksburg’s most historic area.

“Like Anna Kate, 23, and Sam, 27, I was young when I bought Anchuca, so naturally many people questioned my decision,” Pharr said. “But, thankfully, I had a greater number of people who supported me. Combine that with persistence, passion and the right attitude, and you can make anything happen. This couple most definitely shares that mindset.”

“Tom and the talented team at Anchuca have done an incredible job preserving, enhancing, and marketing this historic property,” Andrews said. “We’re excited to build on that success for the next generation.”

Surrounded by stately live oaks in the heart of city founder Newitt Vick’s original town plat, Anchuca was built in the 1830s by local politician J.W. Mauldin. However, the overall Greek revival-style structure seen today was constructed in the late 1840s. The first of its kind in the area, this columned addition is attributed to Jane and Victor Wilson, Vicksburg’s most influential citizens of their time. Listed on the National Register of Historic Places, the landmark property is named for the Choctaw word meaning “happy home.”

During the Civil War, the home served as a hospital for wounded soldiers. Four years after the civil war ended, Jefferson Davis made one of his last public addresses to friends and neighbors from the front balcony while his brother Joseph E. Davis was in residence at the home.

The mansion at 1010 First East St. became known by its name Anchuca in 1955, as the first “home of historic significance” to open its doors “for public inspection,” according to The Sunday Post-Herald, November 27, 1955. Today, Anchuca offers guest rooms, dining options and a backdrop for special events, as well as a self-guided tour option.