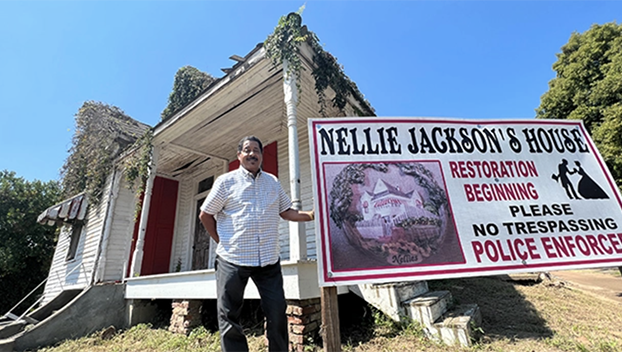 JT Robinson poses in front of property before new sign was put up.

The owner of a house that once belonged to a famous Natchez madam says he was blindsided at a city preservation commission meeting when members questioned the status of repairs to the property.

J.T. Robinson first started taking steps in 2019 to restore the house at 416 N. Rankin St., which had been home to Nellie Jackson’s brothel.

His goal is to later reopen Nellie’s as a tourist attraction, a bed and breakfast or possibly a museum honoring its original owner, whose business was legendary throughout the South until she died when a disgruntled man set fire to the home.

The nine-member Preservation Commission is charged with ensuring the architectural and structural integrity of Natchez’s historic district.

Robinson said he happened to be attending the commission’s Wednesday meeting last week for another reason when the Commission Chairman Andy Sartin called out the 416 N. Rankin St. address and moved to have the property added to an “adjudication list.”

Then one of the meeting attendees announced “the owner is here,” and the commission asked Robinson to speak about the house project.

Commission member Liz Dantone said she hopes the discussions Wednesday with Robinson will “jump-start improvements to secure the outside of the building.”

He was warned that if he allows the house to deteriorate further, he could face a “demolition-by-neglect” process, which puts property owners on notice that they must reverse the dilapidation of their properties or else the city can file misdemeanor charges and impose fines.

“I had no earthly idea that they would turn it around like that,” Robinson said. “My question first question to them was, ‘where were you before I bought it?’ As soon as my name went down on the deed, I get called on.”

Nellie Jackson was a Black woman born before the Civil Rights movement who climbed out of poverty and operated a bordello with the full awareness of the community, law enforcement and government officials.

She was the topic of an Amazon film documentary “Mississippi Madam: The Life of Nellie Jackson” released in 2017.

Robinson said he has taken a proactive approach to save the home. He said he first sought to take ownership in 2019 and only received the deed in November 2021.

He paid for the house and three years of back taxes and penalties. He later found that the county’s records were inaccurate.

The house had multiple owners and needed a land survey to have the property lines drawn correctly, he said, adding the record had a property line through the middle of the driveway. He had to obtain quick claim deeds from the owners and title confirmation before the property would be legally his on paper. This had to be done before he would start investing his own money to save the house, Robinson said.

Since then, he has rebuilt the entire front porch and columns that support the roof. Robinson said the wood around the porch and columns had been rotten and was unsafe to walk on, much less allow anyone to climb onto the roof to replace it.

Robinson said he also obtained three estimates for what it would take to fix the remainder of the house, starting with the leaky roof which Robinson said is his first priority. Amid inflation and the legal process to have the house in his name, the estimates Robinson received fell through. The first estimate started at $97,000 and another came closer to $200,000, he said. He has received a new estimate of $150,000 and is now deciding what steps to take next.

Robinson has considered starting a non-profit to raise grant funds for the project but has also considered turning Nellie’s into a bed and breakfast business, which would rule out him accepting donations.

“I have never asked for donations,” Robinson said. “I asked for help with the community because everyone knows how much crime takes place on Rankin Street. Since I’ve had (Nellie’s) there have been at least four people shot or murdered up there and it’s loaded with drugs.”

“What have I got to gain by trying to save this house?” he said. “I’m 70 years old and if it costs me $100,000 to restore it, I will never get a cent of my money back as profit in my lifetime unless I resell the house. … In reality, this is helping the City of Natchez. It isn’t helping me.”