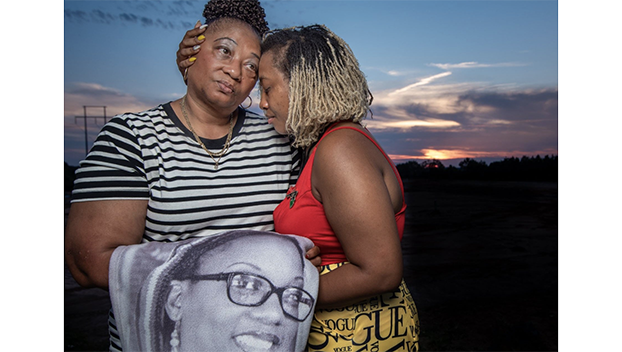 Alisa Archie, 58, left, and her daughter Shalanda Cook, 30, continue to mourn the loss of their daughter and sister, Anteeatta “Tee” Archie Swims, 36, who was killed by her husband, David Swims, 41 in their Oxford, Miss.,home in 2021. Timothy Ivy/MCIR

The soft, halting notes of a piano lingered in the dark room from a video as Shalanda Archie-Cook rocked her 6-year-old sniffling son to sleep. “She’s right here,” she told him, pausing to take a shuddering breath. “In your heart.”

They cried together until the video ended.

It’s been a little over a year since Archie-Cook’s sister, Anteeatta Archie Swims, was killed in June 2021 by her husband, David Lee Swims, in Oxford, Mississippi. She was 35 years old and a teacher at Batesville Intermediate School in the process of applying to be an assistant principal. Ultimately, she hoped to be Mississippi’s superintendent of education.

Her family and friends have remained paralyzed in time, reliving over and over the moment that they heard the news. They hold onto her blood-spattered possessions that they don’t want to look at, but don’t want to discard because they are now all they have left of her. With no trial date set one year out and Archie Swims’ husband free after posting a $10,000 bond, they say that they’re unsure whether they can put their trust in a system that allowed a man with a trail of violence following him wherever he went to continue living his life as though nothing happened.

One Year Of Heartbreak And Unanswered Questions

Anteeatta Archie and David Lee Swims were married for 10 years. During that union, Swims verbally abused her, her mother, Alisa Archie, alleges. Though Archie Swims never mentioned any physical abuse, her sister, Archie-Cook, noted that she kept her arms covered during video chats in the weeks before she died and a neighbor once mentioned she saw bruises on her arm.

“She was tired,” Archie-Cook said. “She realized that the life she was living was not what she wanted it to be. She attempted to leave him, and he killed her.” Swims is charged with first-degree murder.

Archie-Cook, said the two often commiserated about being in abusive relationships, with Archie Swims successfully encouraging her sister to leave, “to follow my heart and do things that made me happy.” Archie-Cook, who hopes to start her own nonprofit surrounding domestic violence activism, said her sister eventually wanted to leave, too, revealing that Swims had bugged her phone and was tracking her car. “There was nothing he didn’t know about,” she said. Archie-Swims, according to her sister bought a second phone — one that was free from tracking. Using technology as a means of monitoring location and phone use is a key sign of domestic abuse.

Swims told MCIR that he never abused Archie Swims or tracked her messages and movements. “All lies,” he said. “I was never abusive towards her. Never.” Swims was married once before Archie Swims and also had a girlfriend before they married. Neither of his ex-partners would comment. But records from the Carroll County Justice Court from the time of his first partneer show simple assault and trespassing charges were filed against him in 2000 and 2001, as well as a simple assault against a deputy in 2003. He was ultimately found not guilty, and Archie Swims helped him to expunge from his record his conviction for the simple assault of the deputy, a felony. A 2007 offense report from Grenada Municipal Court shows his first wife reported him for rape in 2006 after he “held her down on the couch with a screwdriver to her neck.” The case was remanded to the file, meaning the charge was not pursued. An offense report from 2007 filed by Swims says that, after his second partner started “fighting him over some money,” “he tried to get her off him by grabbing her and putting her on the ground.”

Facebook posts from Archie Swims’ account and a screenshot of a video call to her family from her account after her death also indicate that Swims had access to her Facebook account. On a memorial post on the “Justice for Tee” Facebook page, after Archie Swims’ death, Swims commented using his late wife’s name: “Now you are just reaching. If you are going to steal my pictures, slander someone else’s name and blatantly lie as if you know what you’re talking about. Please get your facts straight. No one is going to believe this garbage.” He signed the post, “David L Swims II.” Swims said that the police confiscated his phone and both of Archie Swims’ phones, but he still has both her tablet and PC, which he pays for.

Archie Swims left her husband the weekend before her death, Archie said, and stayed with her. Swims followed, asking Archie Swims to return.

“She went back,” Archie-Cook said. “She refused to believe that the justice system would fail her [if Swims tried to hurt her and she decided to report it]. I’ll be honest, I told her, the justice system is wrong when it comes to women being abused.”

Archie-Cook says that her sister called 911 on Swims once in May, a month before she was killed, claiming Swims was acting irrationally. Archie-Cook says the responding deputies knew Swims through his job at a technology repair shop and left without any sort of punishment and without writing a report. “She called me back and she said ‘I did what you said to try and get a paper trail and they just left. They didn’t write anything down. They just walked in, spoke to him, smiled and walked out.’”

Swims acknowledged that, through his job, he does assist deputies from the Lafayette County Sheriff’s Department, though he denied that there was a direct contractual relationship.

The Lafayette County Sheriff’s Department does not have a report from this May 2021 visit, and the dispatch center could not find a record of a call made from Archie Swims’ address — neighbors also said that they could not recall law enforcement showing up at that time. According to sheriff’s department Maj. Alan Wilburn, it is sheriff’s department policy for an incident report to be written any time a visit is made.

Archie says that her daughter told her she planned to leave him soon after this police call, during which time she stayed with a coworker from the school, who did not respond to requests for comment, and FaceTimed with her mom every day. She went back to the house on a Tuesday, June 8, to make sure the appraisal for the house she shared with Swims went through sincere they were planning to sell it. That was the last time they heard from her.

When Archie-Cook called her sister the next day, June 9, to let her know she had found a house for them in Gulfport, Archie Swims didn’t answer. She always called her mom on the way to work on Wednesday morning — that call never came.

Instead, both Archie-Cook and Archie received text messages from her phone typed in lowercase and with misspellings they said she always avoided. Archie-Cook said she received an additional text at 4 p.m. that Wednesday from Archie Swims’ number that she was in a meeting and would call later.

Texts from Anteeatta Archie Swims’ phone that her sister, Shalanda Archie-Cook, believes were actually sent by her husband, David Swims.

“She wasn’t in a meeting at 4 that day,” she said. “She didn’t even go to work.” Though her body was found June 11, both Archie and Archie-Cook say they think she was killed that Tuesday night, three days earlier, because she was not seen and they had not heard from her since then. Asked which day he said he killed Archie-Swims, Swims said, “I’d rather not speak on that until the trial date.”

According to Archie, Swims never called 911 — instead, she made the call as she drove to Oxford from her Carrollton home after not hearing from her daughter for two days.

Swims said he was “highly medicated that morning” so his memory is “kind of hazy” and he is “not sure if I believe that I did call them as well.” When asked to elaborate on the circumstances of his medication, Swims also said that he did not want to speak more until the trial. The dispatch center did not have a record of a 911 call from Swims’ address on that day.

“My head was pounding, I just could feel like something wasn’t right,” Archie-Cook said. She got a call soon after from the sheriff’s department telling her that her sister was dead.

Swims, who is out on bail after posting $10,000, said he killed his wife in self-defense after an argument went “downhill” when he questioned her about being unfaithful, a similar defense to that made against his first wife in the 2007 police report, The Lafayette County Justice Court did not respond to repeated inquiries about whether Swims’ was within the county’s guidelines for first-degree murder. The bond schedule for the state says that bail for manslaughter “(or any other non-capital crime involving loss of human life)” can range from $10,000 to $100,000.

“Things went sideways that morning,” he said, “and what happened happened. Was it avoidable? Probably.”

He said Archie Swims spit at him and charged at him with a knife. Her family disputes these accusations, instead saying there was no knife present and they had spoken to her immediately before she said she was going to sleep.

Swims added he has not been interviewed by any detectives from the sheriff’s department and a trial date has not been set.  The only person he has spoken to thus far is his lawyer.

Archie-Cook said she and her sister often talked about how their own lineage was filled with “many [women] still being abused and threatened daily,” both currently and in the past. As Black women, she said, they both discussed the unique challenges they faced. In her work helping battered women, for example, Archie-Cook noticed that some shelters are less welcoming to Black women. They both discussed a culture of acceptance surrounding abuse, which was often stigmatized within households and the broader community.

That culture of acceptance extended into Archie Swims’ household, as well, coupled with a lack of trust in a criminal justice system that Archie-Cook calls “corrupt.” She resigned herself to the abuse, said Archie-Cook. “I really, really think she felt like it wouldn’t get to that point, but I think she accepted that it was just.”

“She fought for justice, for kids, and women. And she believed that there was good in everyone,” Archie-Cook said. “And for her to be gone like that from someone that she truly gave a lot of her life for is… beyond the most tragic thing that could have ever happened to someone.”

This story was produced in partnership with the Community Foundation for Mississippi’s local news collaborative, which is independently funded in part by Microsoft Corp. The collaborative includes MCIR, Mississippi Today, the Clarion Ledger, the Jackson Advocate, Jackson State University and Mississippi Public Broadcasting.

The Mississippi Center for Investigative Reporting is a nonprofit news organization that seeks to inform, educate and empower Mississippians in their communities through the use of investigative journalism. Sign up for our newsletter.