Owner of house where infamous Mississippi brothel operated said ‘Old South still lives in Natchez.’ Wants no part of system that wants to punish him over property condition. 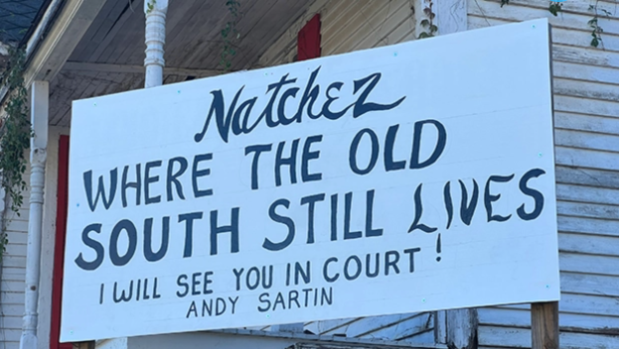 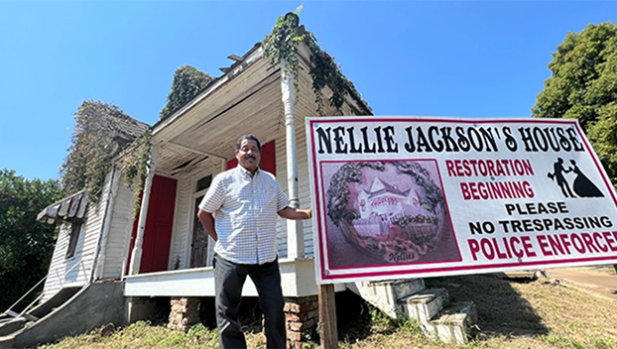 JT Robinson poses in front of property before new sign was put up.

The owner of a once infamous Mississippi brothel made it known to the Natchez Preservation Commission that he will not be a part of the “good ole boy” system that is trying to punish him over the dilapidated condition of the historic property,

A newly painted sign appeared this week in front of the house at 416 N. Rankin St., once the home of a famous Natchez madam.

JT Robinson, the house’s owner, said he erected the new sign in response to comments about the house which were made at a recent Natchez Preservation Commission meeting.

Robinson said he put the original sign there to deter vandals and “inspire” the Natchez community so that they would know, “Nellie’s is not lost.”

With the new sign, Robinson said he intends to send another message.

“They didn’t appreciate the old one,” Robinson said. “I feel like what (the preservation commission) did to me was a violation of my civil rights. I want to send a clear message. I’m not a member of the good ole boys and I never have been.”

Robinson first started taking steps in 2019 to restore the house which had been home to Jackson’s brothel. He has said his goal is to reopen Nellie’s as a tourist attraction, a bed and breakfast or possibly a museum honoring its original owner, whose business was legendary throughout the South until she died when a disgruntled man set fire to the home.

Last week, the house became the topic of discussion at a Natchez Preservation Commission meeting when chairman Sartin moved to have the property added to an “adjudication list.”

Robinson was attending the meeting for another matter but was asked to speak about his plans and progress on restoring the Rankin Street property. Robinson was warned that if he allows the house to deteriorate further, he could face a “demolition-by-neglect” process, which puts property owners on notice that they must reverse the dilapidation of their properties or else the city can file misdemeanor charges and impose fines.

Robinson said he was “blindsided” at the meeting, which he was not summoned to but attended for another reason. He also said he recently made efforts to replace the front porch, add new columns and restore electricity to the house after a lengthy legal process of getting the house deeded to his name.

Efforts to reach Sartin were unsuccessful on Tuesday. This story will continue to be updated with more information.