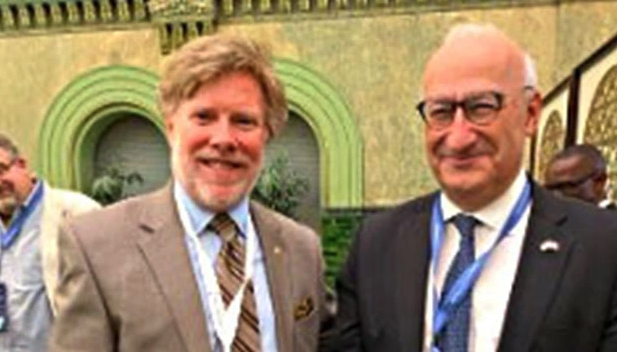 When the French Ambassador to the United States visits Mississippi, he will not only visit the site of a 1716 French fort on the Mississippi River but also visit one of the queens of pop music Patti Labelle.

The City of Natchez will play host to the Honorable Philippe Etienne, Ambassador of France to the U.S., on Saturday, Oct. 8.

Gibson said Ambassador Etienne and his party are expected to arrive mid-morning Saturday. He will give Etienne a tour of the city, which will include lunch and a visit to Natchez National Historic Park at Fort Rosalie, which is home of the 1716 French fort established more than 300 years ago.

“We are also looking forward to taking the ambassador to the Blues and Soul Superbowl concert on our historic bluff Saturday night,” Gibson said. “We can’t wait to introduce him to the Queen of our Hearts, Ms. Patti La Belle.”

“I am delighted to visit the beautiful City of Natchez, which was founded by the French more than 300 years ago,” Etienne said in a press release issued by the city on Friday afternoon. “I am looking forward to touring Fort Rosalie and discovering the Southern hospitality. I would also like to take advantage of this visit to recognize the importance of the Natchez Indians, the first inhabitants of Natchez.”

Gibson said the visit will include meetings to discuss the development of French heritage sites including Fort Rosalie, cultural arts exchange possibilities between Natchez and France and observance of the significance of the Natchez Indians, the first inhabitants of Natchez.

Before becoming ambassador to the U.S., Etienne held numerous posts within the Ministry for Europe and Foreign Affairs, notably including Ambassador of France to Romania from 2002 to 2005, director of the Cabinet of the Minister of Foreign and European Affairs from 2007-2009, Permanent Representative of France to the European Union (2009-2014), Ambassador of France to Germany (2014-2017) and most recently, Diplomatic Adviser to the President (2017-2019). Philippe Etienne is an expert on the European Union and continental Europe. He has held posts in Moscow, Belgrade, Bucharest, Bonn, Berlin and Brussels. He has also served as an adviser in the Cabinet of the Minister of Foreign Affairs on several occasions. A graduate of the École Normale Supérieure and the Ecole Nationale d’Administration (“Voltaire” Class, 1980), Philippe Etienne also holds the Agrégation (teaching diploma) in mathematics, has a degree in economics and is a graduate of the National Institute for Oriental Languages and Civilizations (Serbo-Croatian). He speaks English, German, Spanish, Russian and Romanian. He is an Officer of the Legion of Honor and a Commander of the National Order of Merit. For more information visit https://franceintheus.org/spip.php?rubrique95.