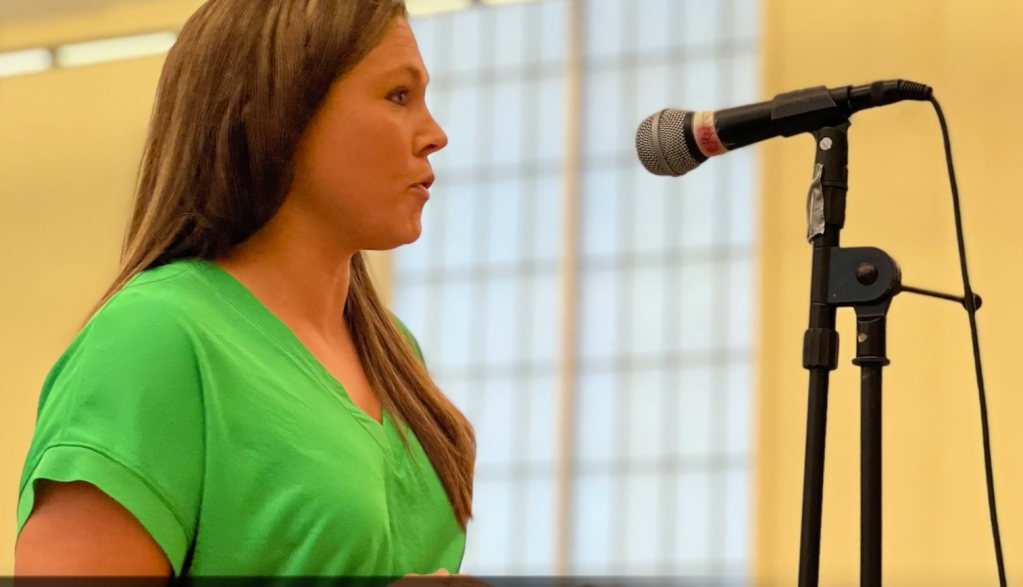 Victoria Darden Garland never intended to become the face of a social and political movement, but that’s exactly where she found herself in 2019 during the Yazoo Backwater Flood.

A fifth-generation Onward resident who has devoted herself to farming alongside her father, Garland said she began that year as a girl. By the time the six-month flood was over, however, she felt aged beyond her years.

“In 2019, I started off that year as a child,” she said. “By the end of that year, I was no longer a child. … Before 2019, I had no idea what politics really did for things. I had no idea how Washington, D.C. affected me in Onward, Miss. It really opened my eyes.”

Left with no land to farm, and no way to leave her family’s home unless by boat or her father’s airplane, Garland felt compelled to start documenting the impact of the historic flood on creatures great and small.

A longtime advocate for the Finish the Pumps movement, Garland spoke before a delegation from the Biden Administration during a listening session at South Delta High School on Aug. 24. It was the latest in a long string of meetings she’s had with government officials, and in speaking that night, she delivered the same speech she’s honed for the last three-and-a-half years.

She said she’s almost perfected the spiel, knowing when to pause and when to keep pushing, condensing her trauma in a palatable three minutes.

“You tell the same story every time, and it gets old, but there’s always somebody that hasn’t heard it,” Garland said. “You’ll meet people — daily, this happens — who don’t even know it happened.”

While she lived through the 2011 flood — which was a Mississippi River flood, not backwater — Garland said nothing in her life had prepared her for the devastation of 2019 and 2020.

“The first flood I remember is the 2011 flood,” she said. “They were starting to panic that the levee was going to overtop from the Mississippi River, and that was me getting my feet wet with what’s going on.”

The Darden family packed up all their belongings, and Garland and her mother left for Vicksburg. They worried about the river flooding, but the backwater and creek surrounding their property didn’t flood their home.

“It was at the Armory in Rolling Fork. The amount of vehicles parked there was mind-blowing; I hadn’t ever seen the community come together or the number of people,” she said. “It was standing room only. … They were talking about if the levee broke, what would happen, and emergency plans. I was still a child at that point, and it was wild.”

It all began with an evacuation, she said to the group at South Delta High School.

“I stayed on my farm with my father, who is 76 years old. My mother, who is 67, didn’t know how to swim. She could not boat. She had to move to Vicksburg,” she said. “I stayed behind with my father because he has a ring levee — as (the government officials) suggest — around his house. And when it rains, we have to be there to pump out the water.”

In the midst of battling the floodwater in her own backyard, Garland found herself teaching neighbors how to use hashtags, how to post on Facebook and use social media to draw attention to their plight.

“Probably the most frustrating part is that we couldn’t get national attention. We couldn’t get local attention, let’s be honest,” she said. “We did a piece with Insider Today, a few other big-name things, and we thought we were doing something. We were desperate to tag anybody and everybody.

“We did what we could with the tools we had,” she added. “We were very isolated, but we used our voices.”

The notion of working with what one has permeated every part of the flood experience, Garland said.

She described the miles-long boat rides she and her father took each time they needed to get to their home. First, they parked at their neighbor’s house, launch from a nearby creek, and then navigate through branches, debris and animal carcasses to reach their destination. They didn’t have a boat of their own, so they borrowed one from a neighbor and got it running.

At one point at the height of the disaster, Garland witnessed an emaciated doe attempting to give birth to a fawn. The deer, in the late stages of labor, was forced to flee from nearby alligators and lost its baby.

While the floodwaters are long-receded, Garland said the thing that tugs at her heart so greatly is the number of people who didn’t get their stories told or the ones who are still awaiting help.

It’s for their sake, she said, that she wants to keep fighting for a solution to the flooding in the Yazoo Backwater area.

“The hardest thing was, there are so many people out there who were affected and didn’t get to voice their opinions, and the right questions weren’t asked for them to tell their stories,” she said. “There are people that deserve justice. The whole community does.

“There’s so much that goes on with this situation that there has to be something done about. And if you don’t stand up for it and say something, nobody else will.”