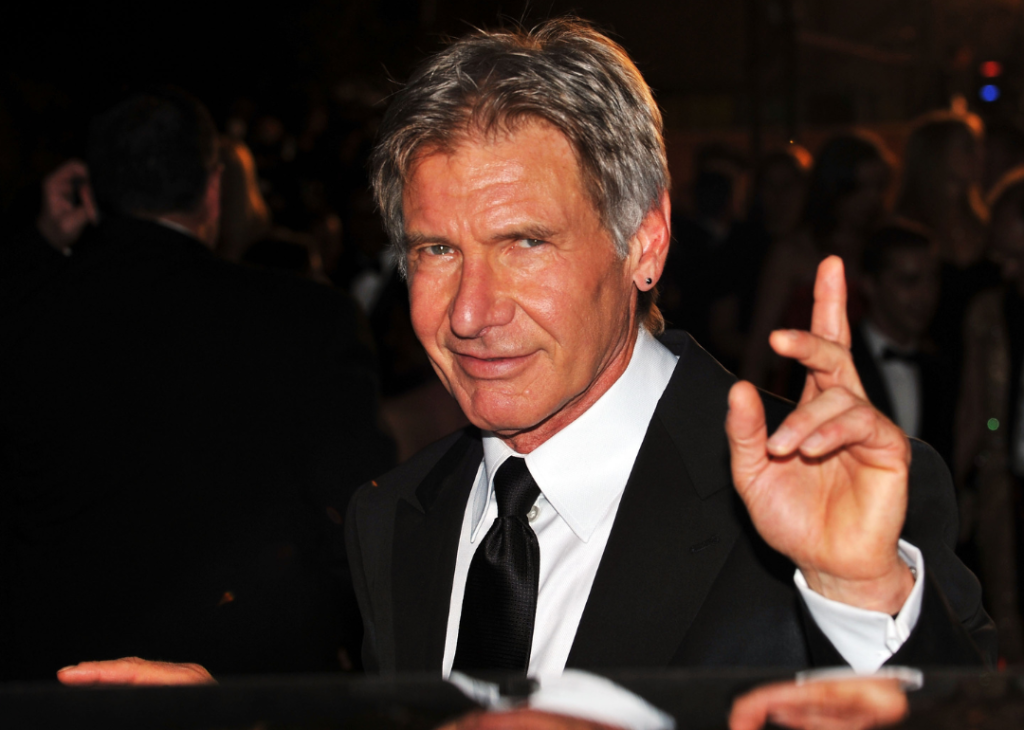 When it comes to leading men in Hollywood, Harrison Ford regularly lands at the top of the list.

Known for bringing numerous iconic genre characters to life, Ford shot to fame in 1977 after portraying charismatic smuggler Han Solo in George Lucas’ smash-hit space opera “Star Wars.” Also known for his work in films like the “Indiana Jones” franchise, “Blade Runner,” and “Witness,” his magnetic star turns have left an indelible mark on American cinema. Most recently, following the debut of the “Indiana Jones 5” trailer at September’s D23 Expo, the trailer was leaked online to much buzz.

To commemorate Ford’s prolific life and legacy, Stacker compiled a list of 25 facts from his life story you may not know, consulting biographies, news accounts, magazines, and more.

Although he’s best known for his acting career, Ford is much more than just a movie star. Throughout the years, he’s become a well-known pilot, pulling off heroic real-life rescues and suffering a severe plane crash in 2015. The actor is also a passionate activist, advocating for environmental conservation, progressive politics, and American archaeologists. The guy has even had spider and ant species named after him.

More than 60 decades into his career, Ford’s legacy as an actor and activist has established him as one of the most legendary living American leading men. Read on to learn more about him. 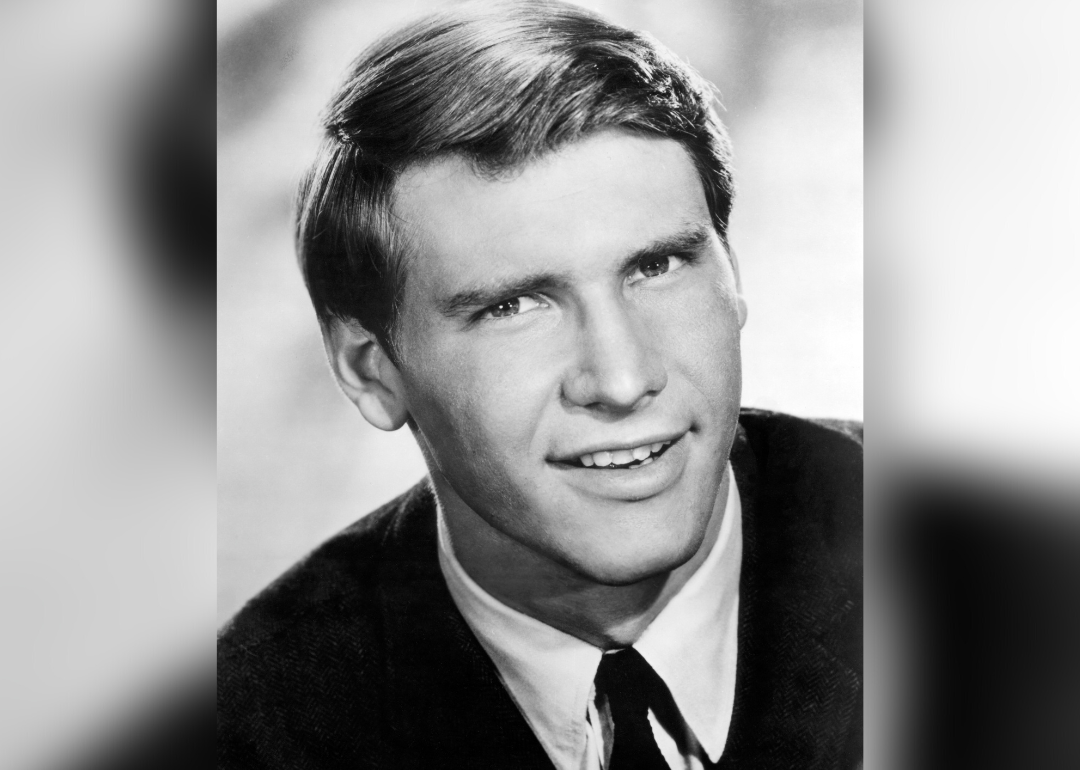 Harrison Ford was born to parents Dorothy and John William Ford on July 13, 1942. His mother was a former radio actress. Ford is of Irish Catholic and Jewish descent and once joked in an interview, “As a man, I’ve always felt Irish; as an actor, I’ve always felt Jewish.” 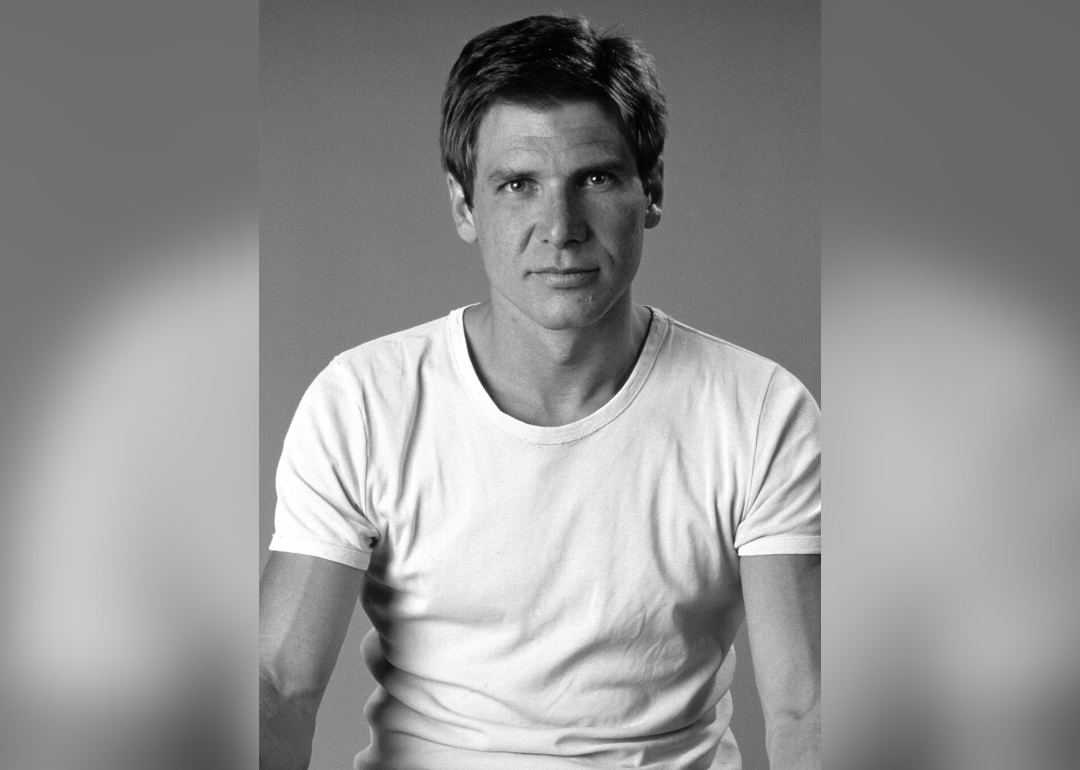 A self-described “late bloomer,” acting wasn’t always Harrison Ford’s goal. He studied philosophy at Wisconsin’s Ripon College and took a drama class toward the end of his senior year in hopes of overcoming his shyness. Although Ford flunked out due to bad grades, he found a calling and, in 1985, was offered an honorary degree from the school, which he declined. 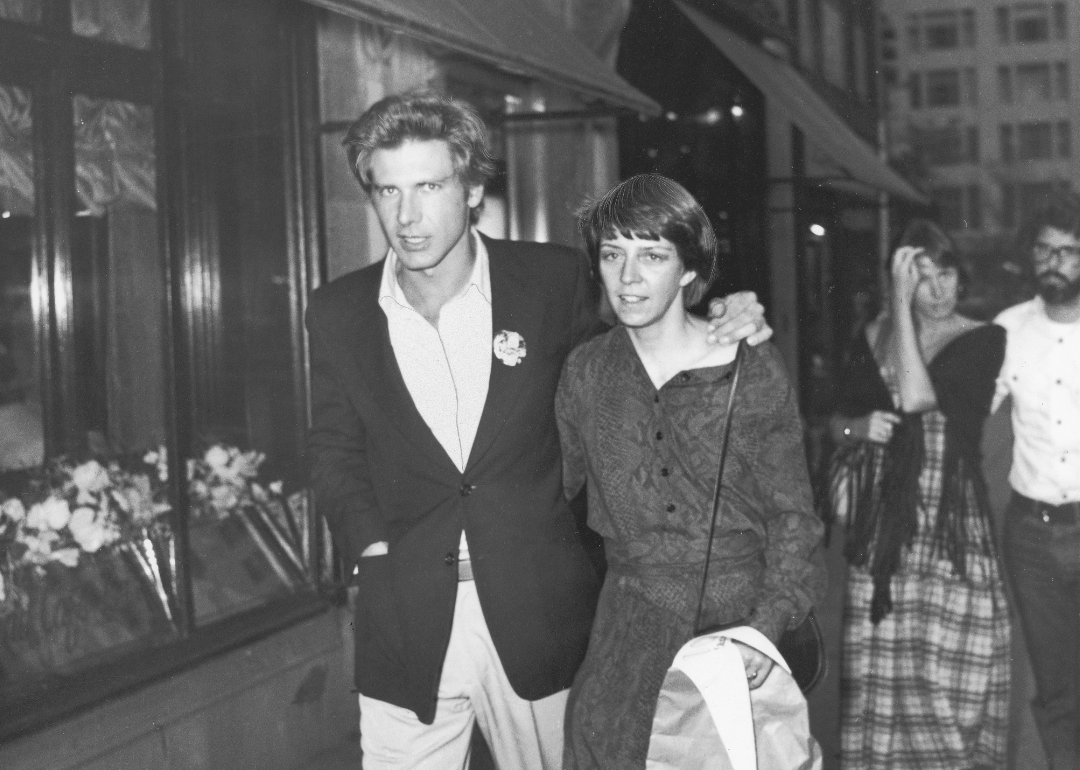 At the start of summer 1964, Harrison Ford wed his college girlfriend, chef Mary Marquardt. Despite Ford’s rocky early years as a professional actor, Marquardt remained supportive and readily accompanied him to Hollywood that same year. The couple spent 15 years together and had two children. 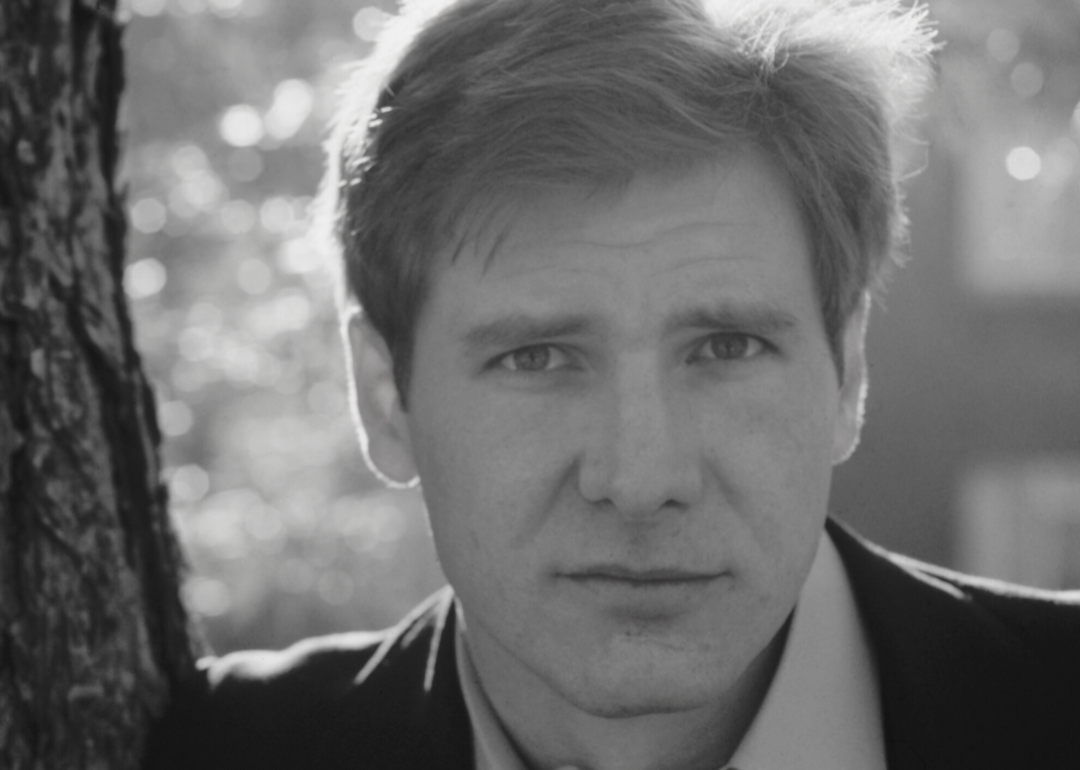 Although Harrison Ford didn’t get the radio voice-over roles he initially moved to Los Angeles to audition for, he eventually got a $150-a-week contract with Columbia Pictures’ new talent program. This involved Ford playing bit roles in the studio’s upcoming films. 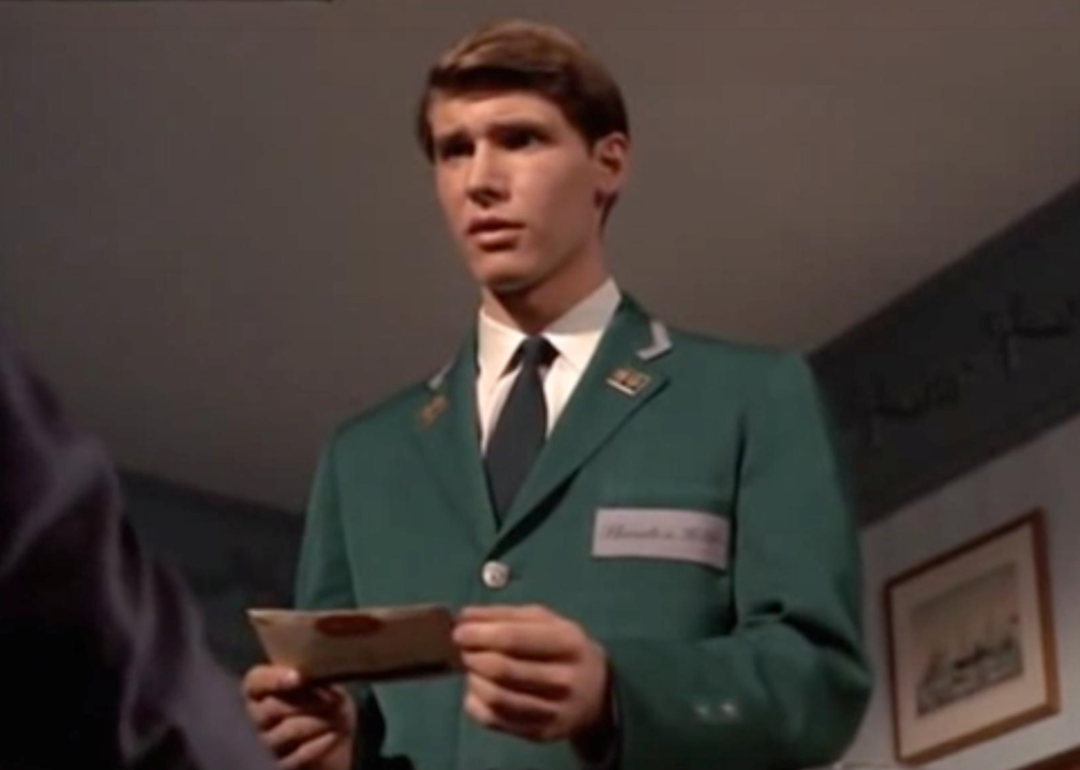 Two years after heading to Hollywood, Harrison Ford landed his first film role in the 1966 crime drama “Dead Heat on a Merry-Go-Round.” He played a bellhop in a then-uncredited part. Ford later recalled, in an interview with Conan O’Brien, being chastised by new talent program head Walter Beakel for not seeming enough like a “movie star” during his 30 seconds of screen time. 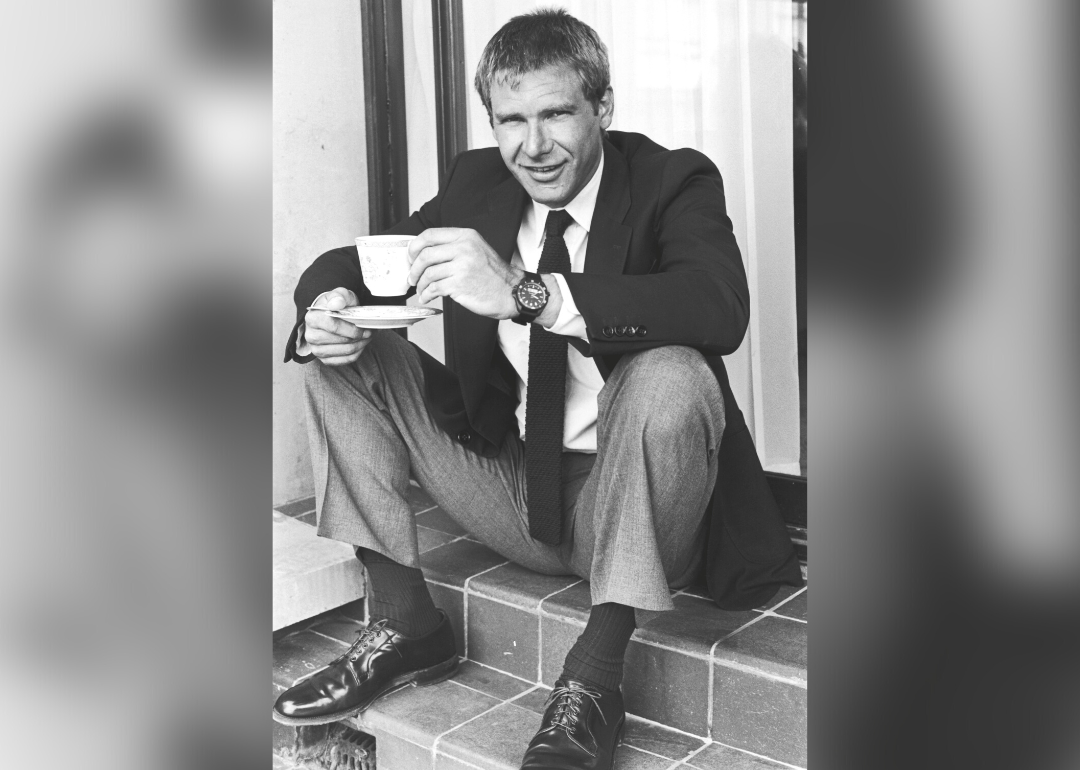 The same year Harrison Ford earned his first film role, he and Mary welcomed their first child, a son named Ben. Their second son, Willard, was born in 1969. Ben is now a restaurateur, while Willard has owned multiple companies including Strong Sports Gym and Ludwig Clothing. 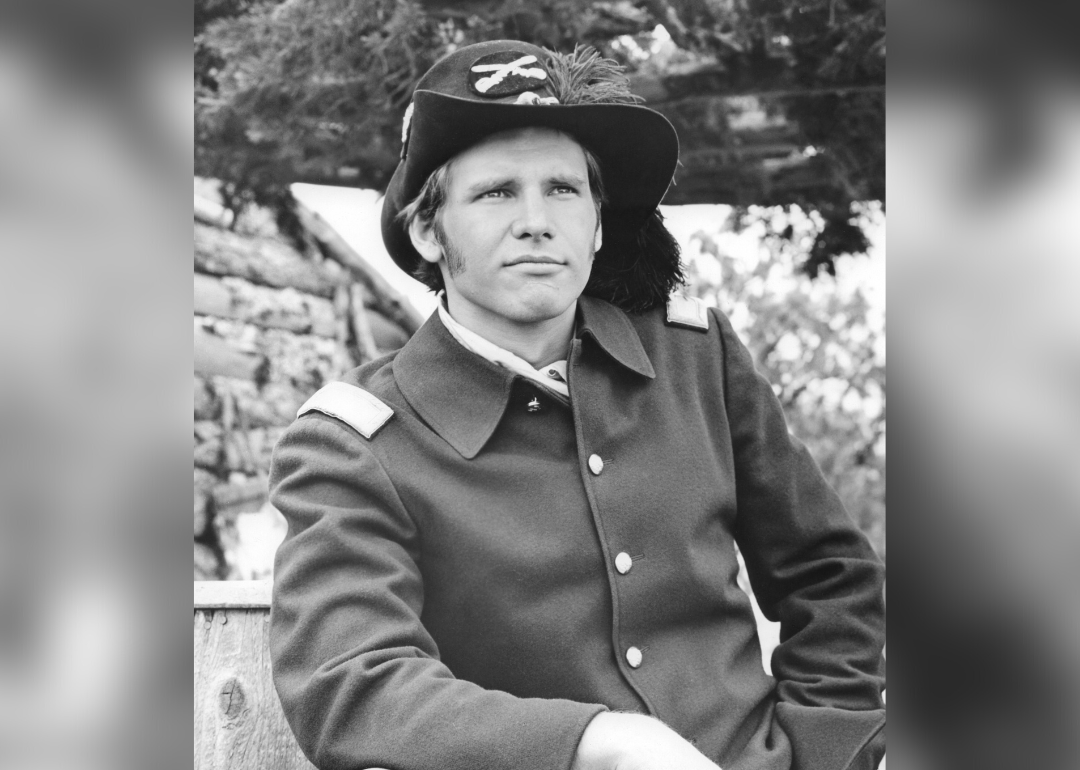 Ford finally received a film credit in the 1967 Western “A Time for Killing.” The film starred Glenn Ford and Inger Stevens; Ford had a small role as a Union soldier named Lt. Shaffer. 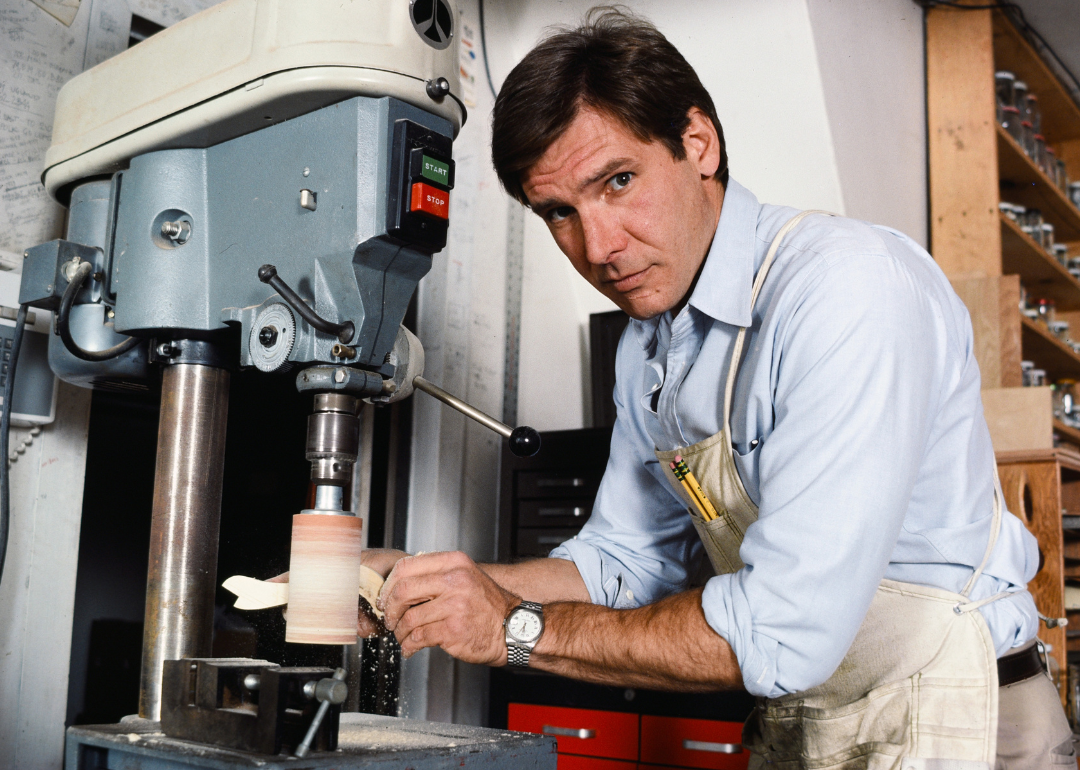 Frustrated with bit parts, Harrison Ford taught himself carpentry to help support his wife and two young sons. He used those carpentry skills to work for numerous famous figures, such as writer Joan Didion and director Francis Ford Coppola. Jobs like this led to Ford’s auditioning for George Lucas. 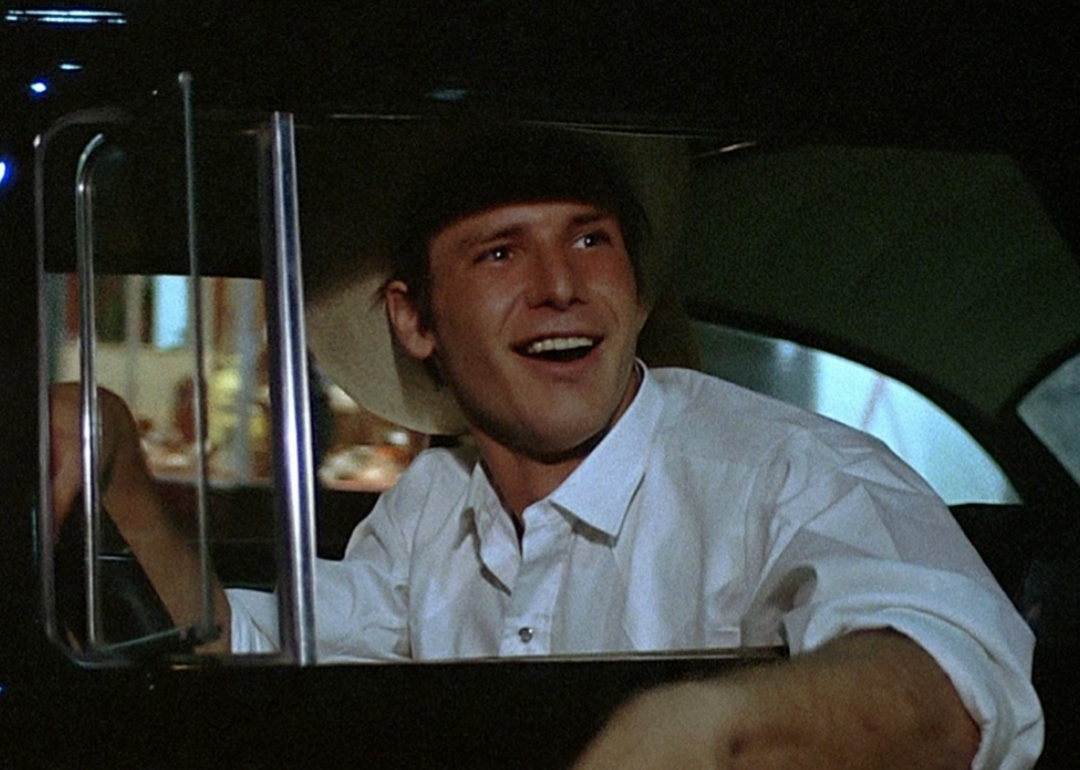 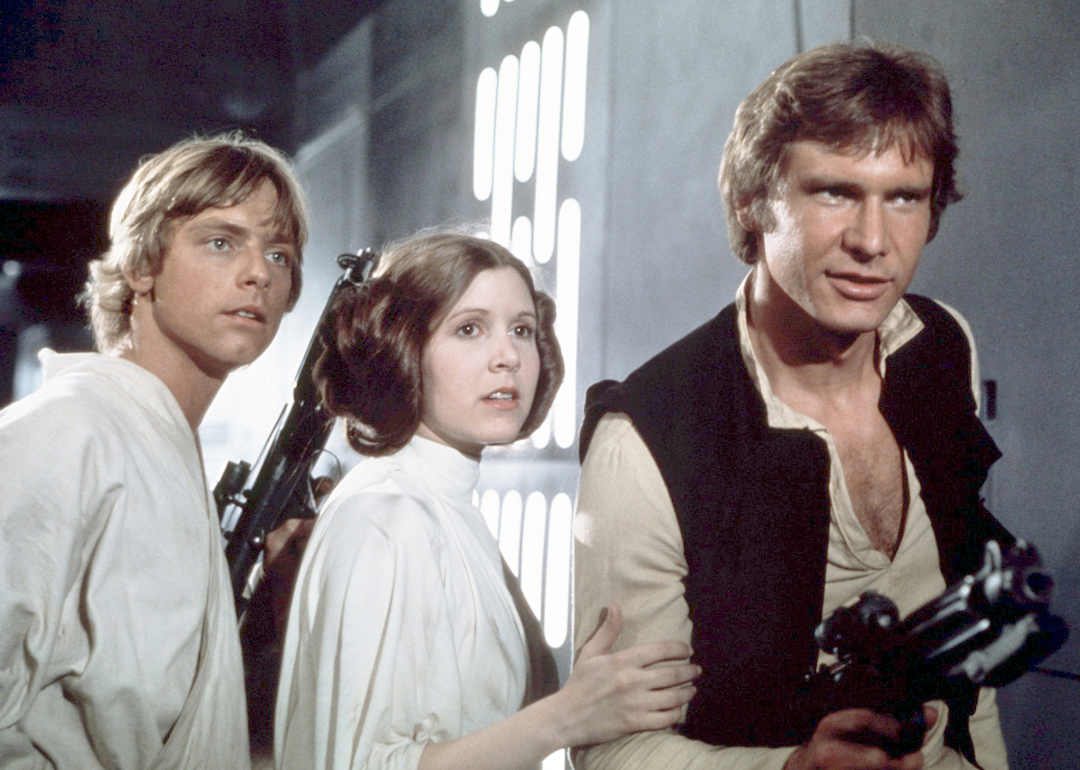 Harrison Ford is synonymous with his “Star Wars” role as the wise-cracking smuggler and space pirate, Han Solo. George Lucas’ film became a smashing success, launching Ford into A-list Hollywood stardom. The actor went on to star in the original film’s two direct sequels and the 2015 film “Star Wars: The Force Awakens.” 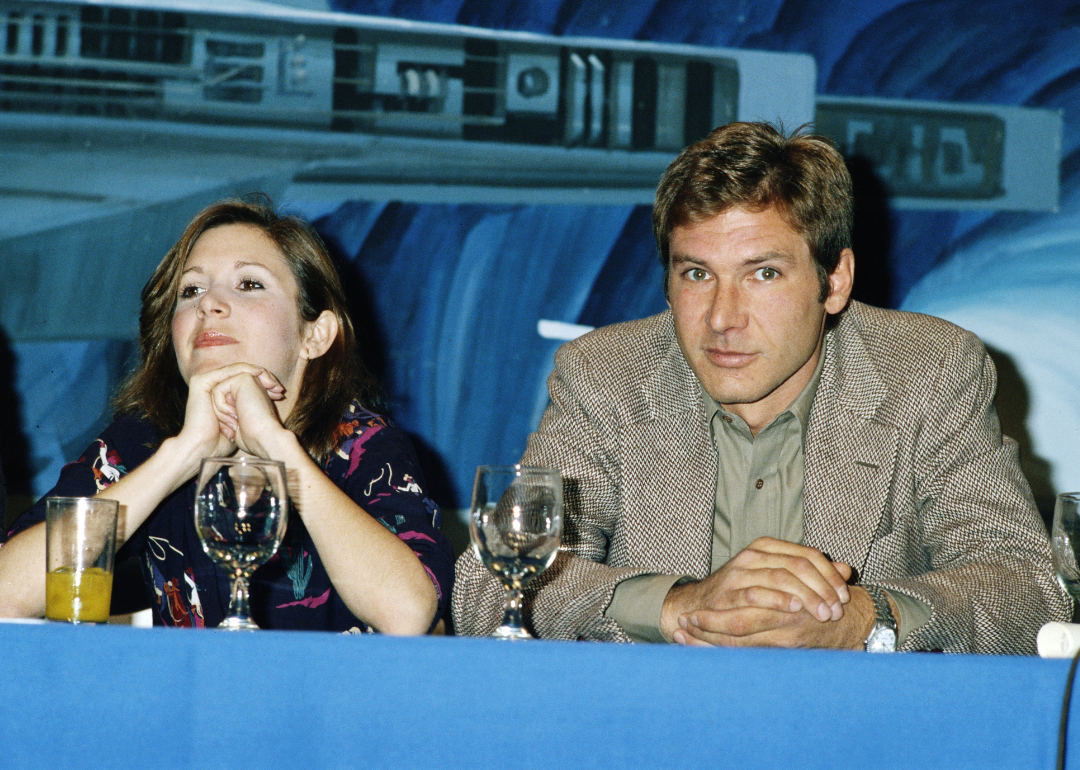 Harrison Ford and Mary Marquardt divorced after 15 years of marriage in 1979. Years later, in her 2016 memoir “The Princess Diarist,” Ford’s “Star Wars” costar Carrie Fisher alleged that she and Ford had a three-month affair while filming the movie when she was 19 and he was 33. However, Fisher wrote she wasn’t the reason Ford and Marquardt divorced. “I don’t think of Harrison in any way as a ‘womanizer,'” she wrote, noting that as far as she knew, his only affair was with her. 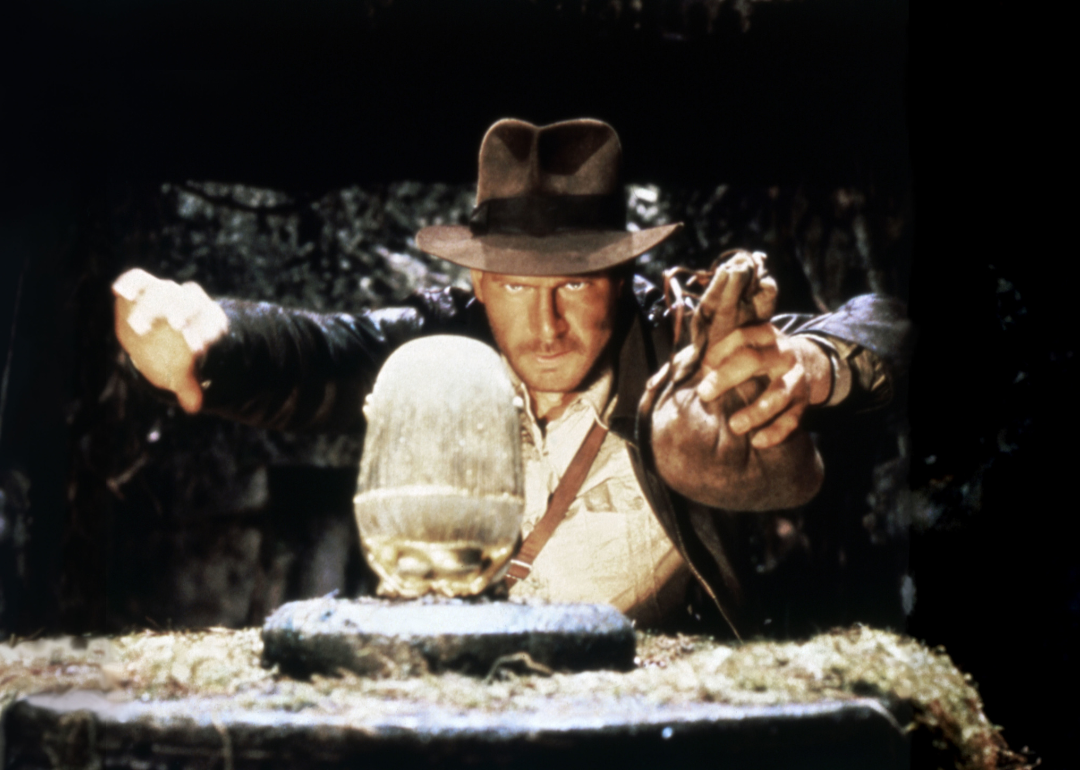 1982: ‘Indiana Jones: Raiders of the Lost Ark’ is released

While starring in the original “Star Wars” trilogy, Harrison Ford took on another once-in-a-lifetime role: playing adventurous archaeologist Indiana Jones in Steven Spielberg’s film “Raiders of the Lost Ark.” Widely considered one of the greatest films ever made, “Indiana Jones” cemented Ford’s status as a dynamic leading man. He went on to appear in three sequels: “Temple of Doom,” “Last Crusade,” and “Kingdom of the Crystal Skull.” 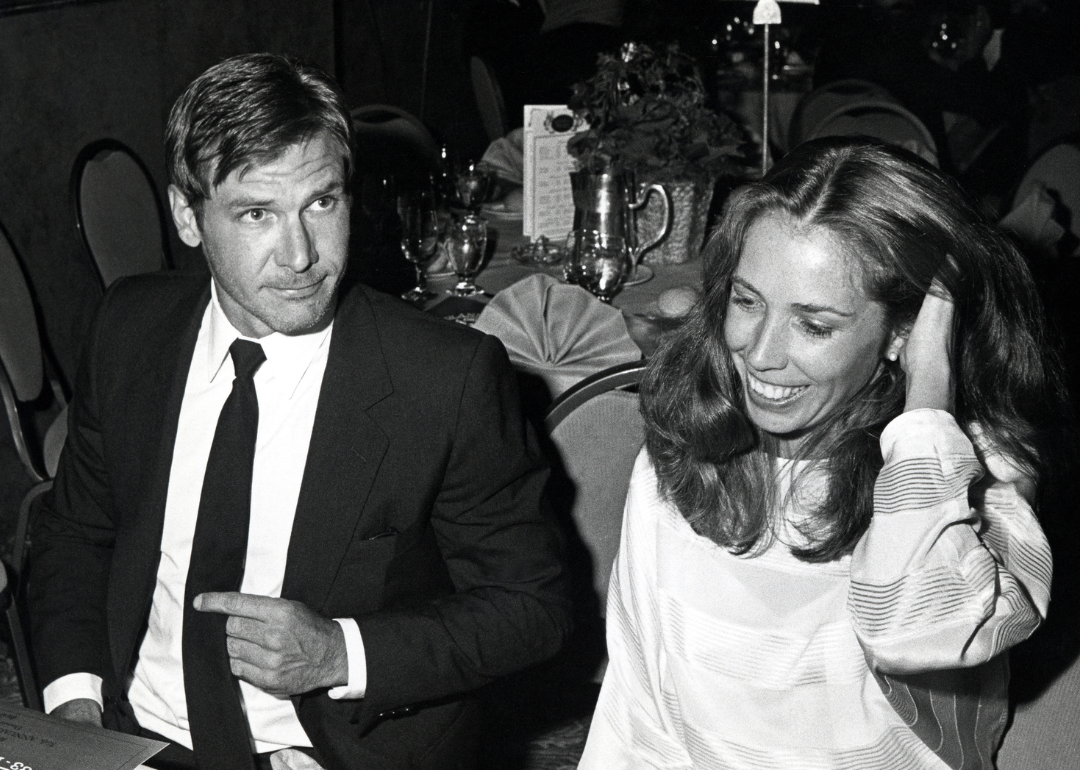 In the spring of 1983, Ford married his second wife, screenwriter Melissa Mathison. The couple stayed together until a 2000 separation and eventual divorce in 2004. They had two children: a son Malcolm and daughter Georgia. 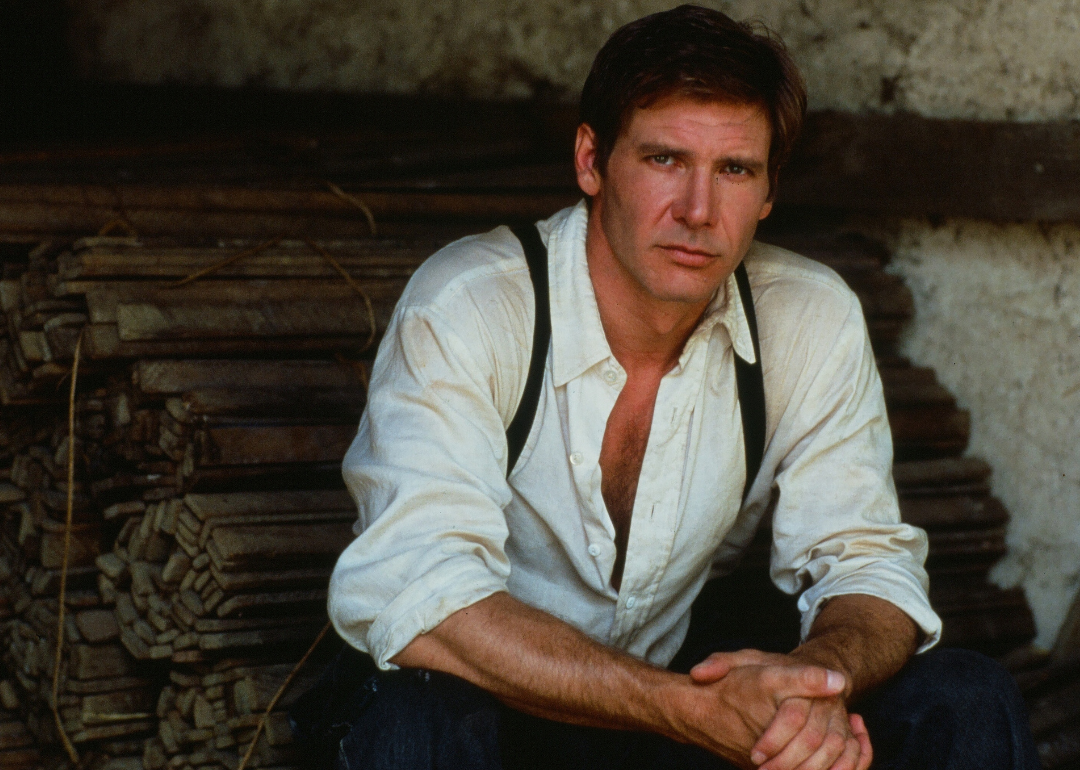 Despite his illustrious career, Harrison Ford has only received one Academy Award nomination. He earned a nod for his role in the 1985 “Witness,” in which he plays a police officer who bonds with a young Amish boy (Lukas Haas) and his mother (Kelly McGillis) after they witness a brutal murder. Ford ultimately lost to “Kiss of the Spider Woman” actor William Hurt. 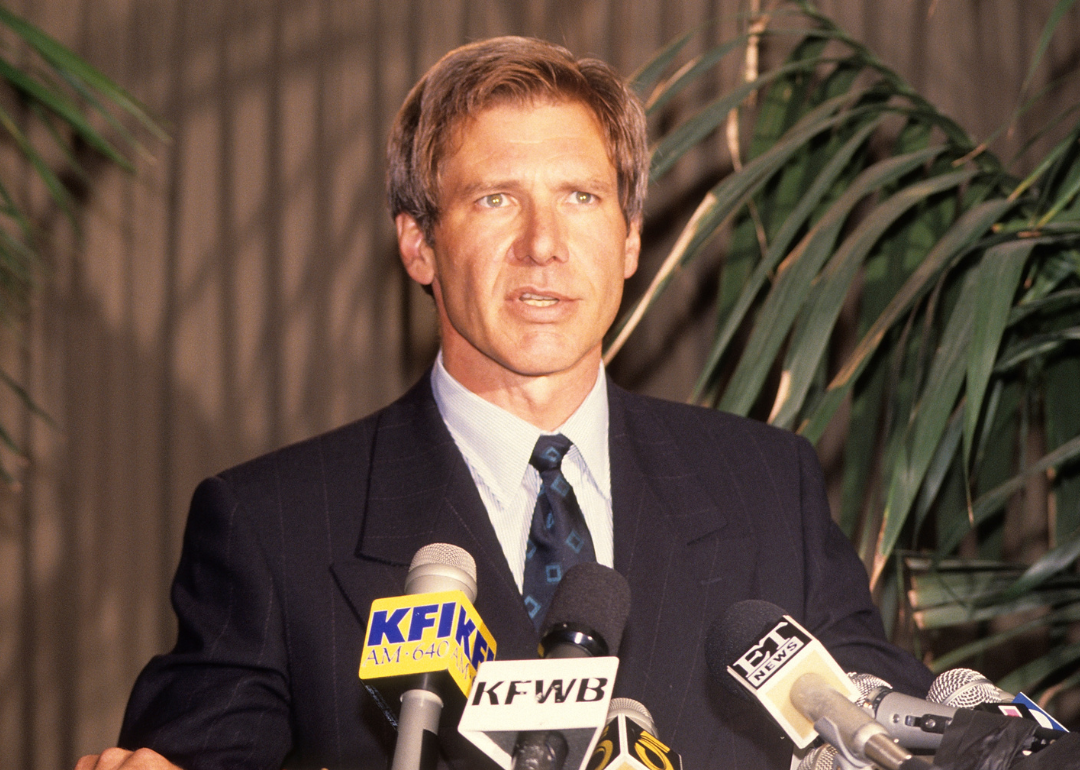 Throughout the years, Ford has used his stardom to promote activism, including the promotion of conservation efforts.

He has served since 1991 as the inaugural vice chair of Conservation International. And in 2019, Ford delivered an impassioned speech at the United Nations Climate Action Summit, urging attendees to listen to “angry young people” fighting to save the planet. 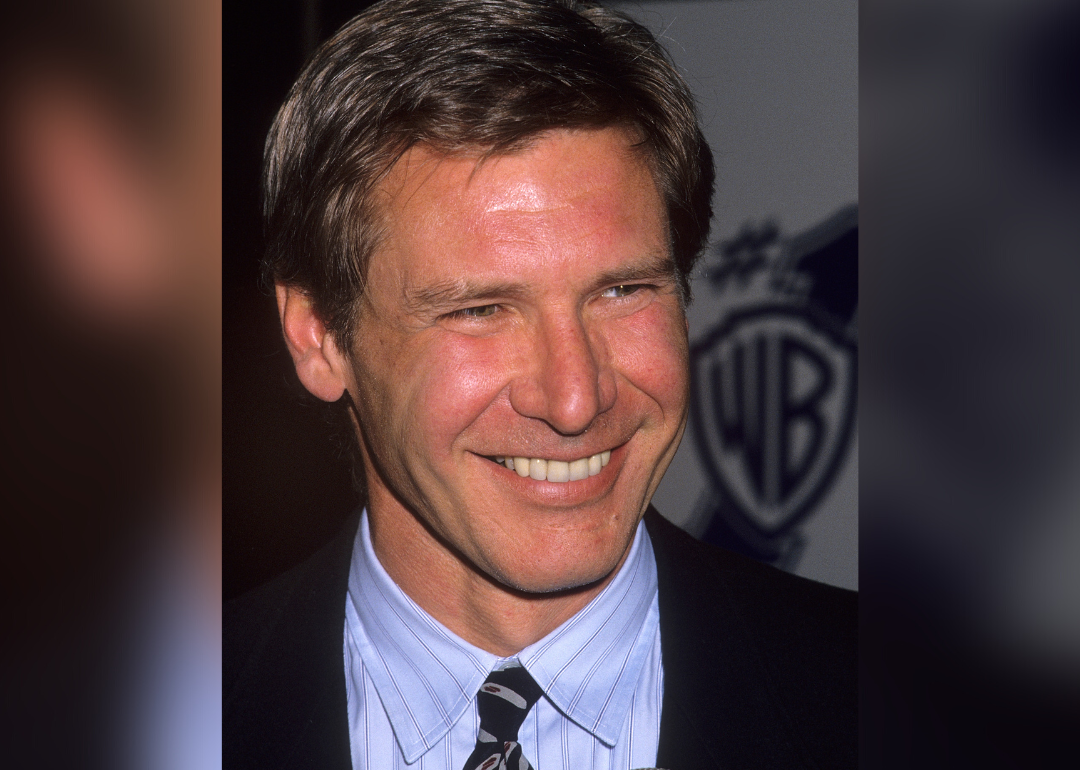 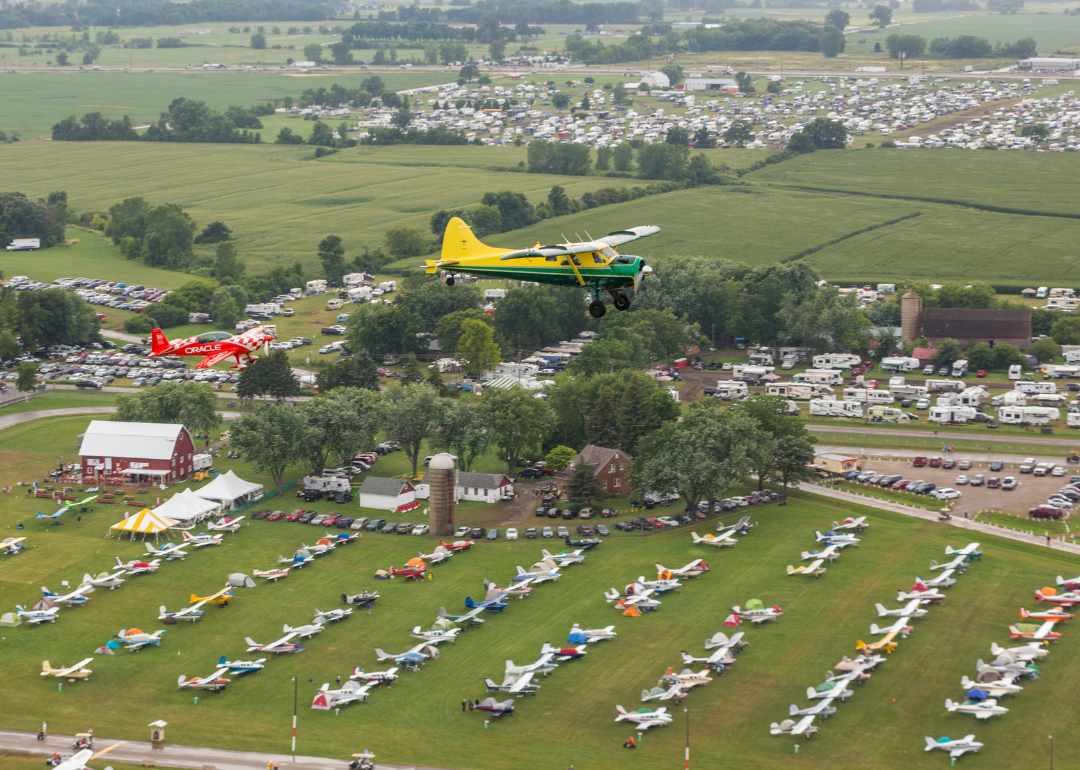 Although Harrison Ford began taking flight training courses in the 1960s, he quit because he couldn’t afford classes. Decades later, Ford bought a used Gulfstream II plane and completed his flight training. He has since purchased numerous vintage planes and served as chairman of the Young Eagles program of the Experimental Aircraft Association from 2004 to 2009. 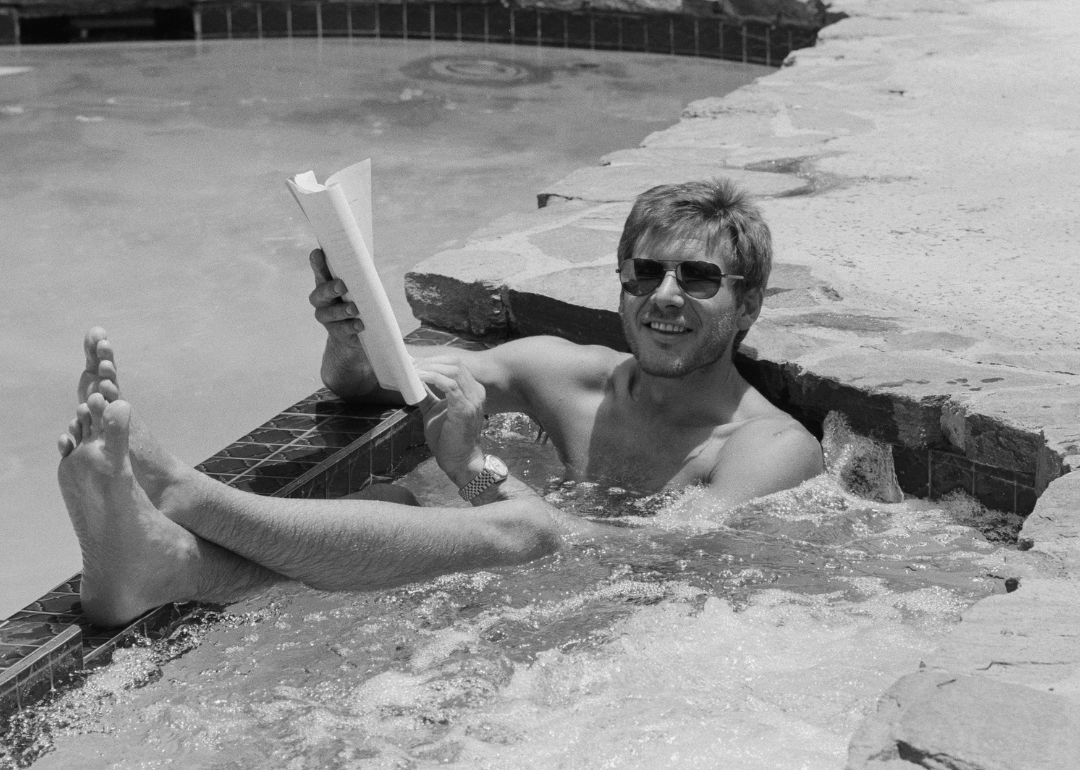 It’s no secret that fans have harbored crushes on Harrison Ford and his famous characters for decades. However, People magazine made things official in 1998 when it named Ford its Sexiest Man Alive. At 56, he was the second oldest winner at the time. 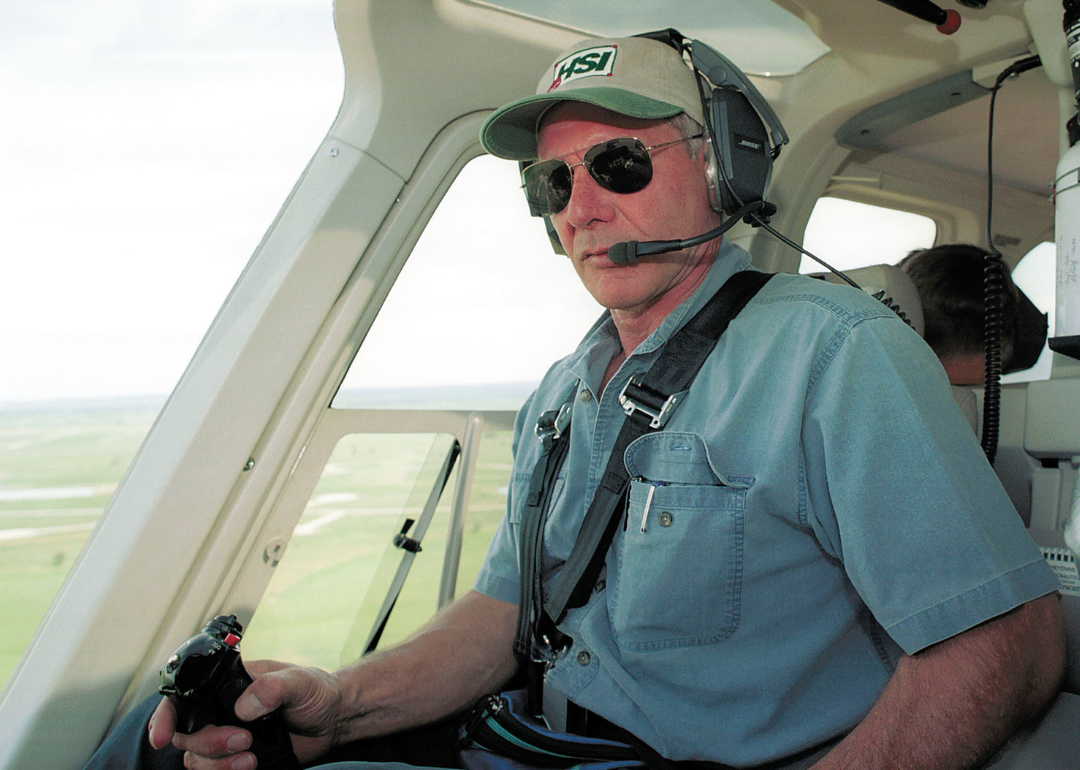 Since becoming a pilot, Harrison Ford has performed real-life rescues. This happened for the first time in July 2000 when he rescued hiker Sarah George, who had become sick five hours into a Wyoming’s Table Mountain hike. The same year, Ford saved 13-year-old Boy Scout Cody Clawson, who had gotten lost in a forest near Yellowstone National Park. 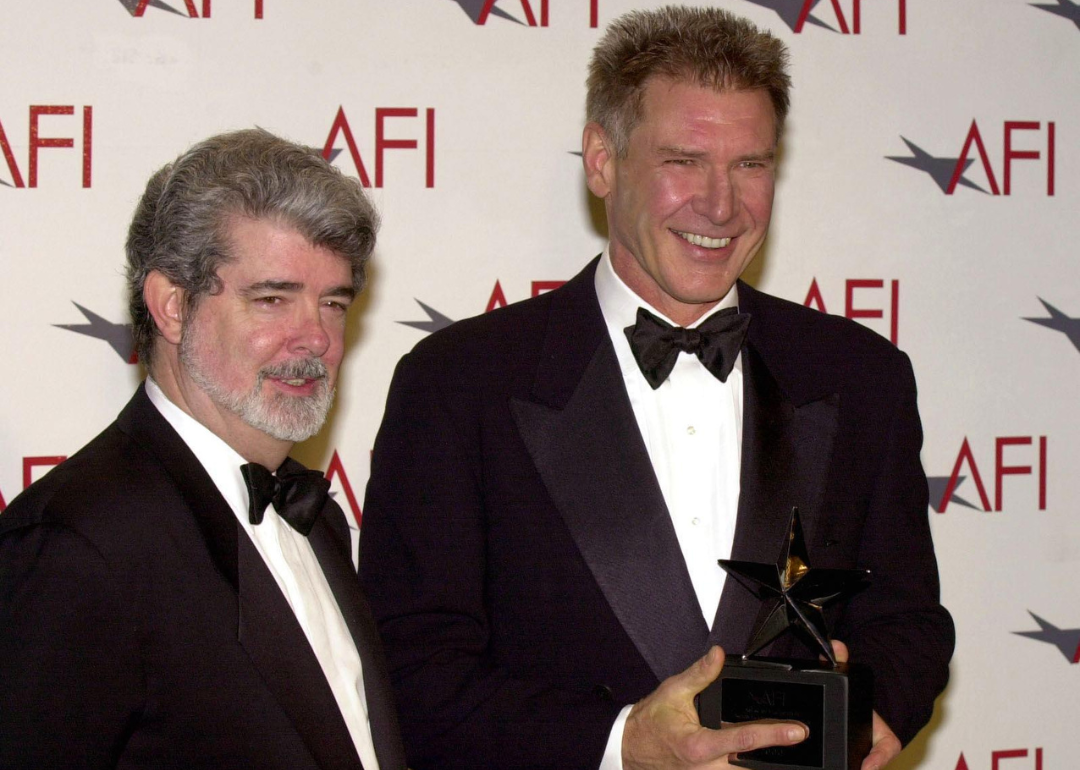 Although Ford has never won an Oscar, he’s received several other honors throughout his career—including his 2000 American Film Institute’s Lifetime Achievement Award. During the ceremony, Ford received personal tributes from George Lucas, Steven Spielberg, Sharon Stone, Carrie Fisher, and Chewbacca. His other awards include the 2002 Cecil B. DeMille Award for “outstanding contributions to the world of entertainment” and a Hollywood Walk of Fame star in 2003. 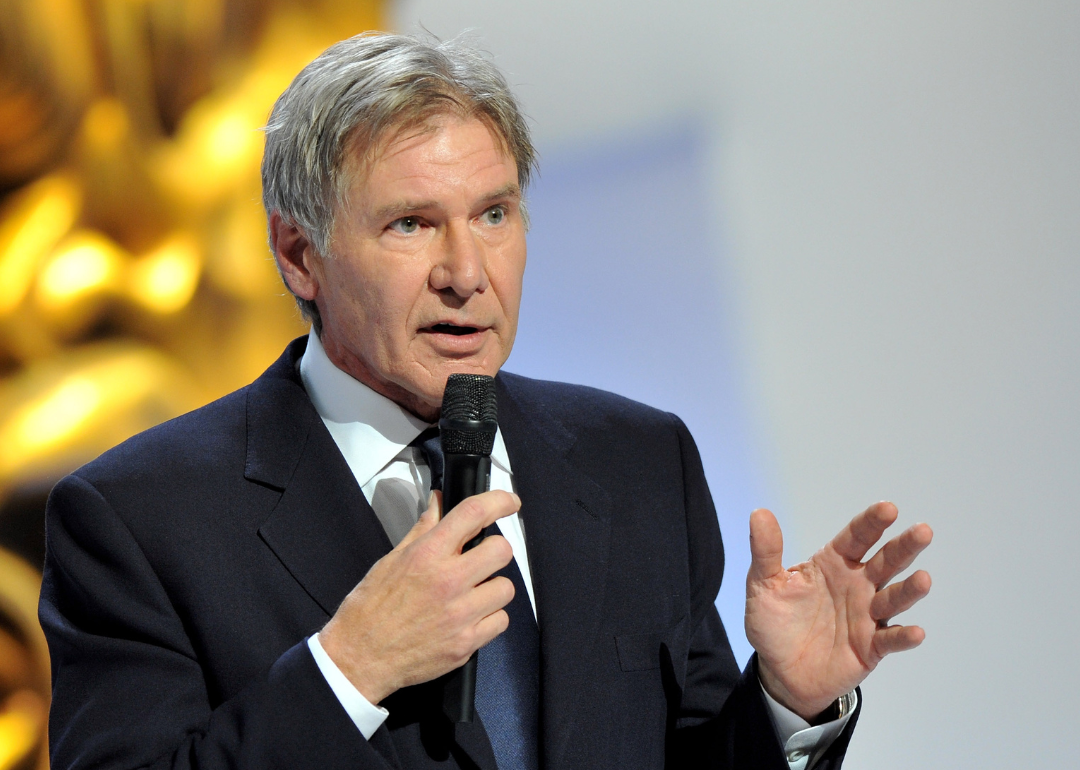 Harrison Ford is well known for playing fictional archaeologist Indiana Jones, but he also supports the field in real life. Since 2008, he has served as a general trustee on the governing board of the Archaeological Institute of America, helping to raise public awareness of important archaeology work. 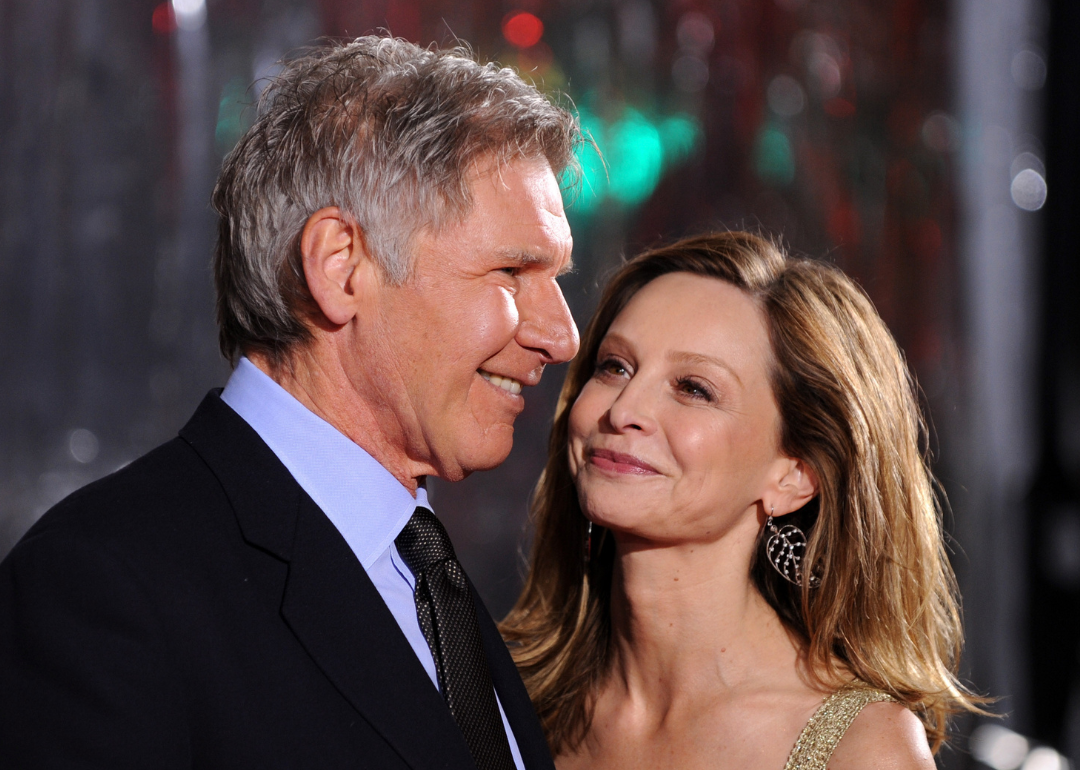 Harrison Ford and actress Calista Flockhart first met in 2002 at the Golden Globe Awards and were married eight years later. The two share a son, Liam, who Flockhart adopted in 2001. The pair reside on an 800-acre Wyoming ranch Ford has owned since the 1980s. 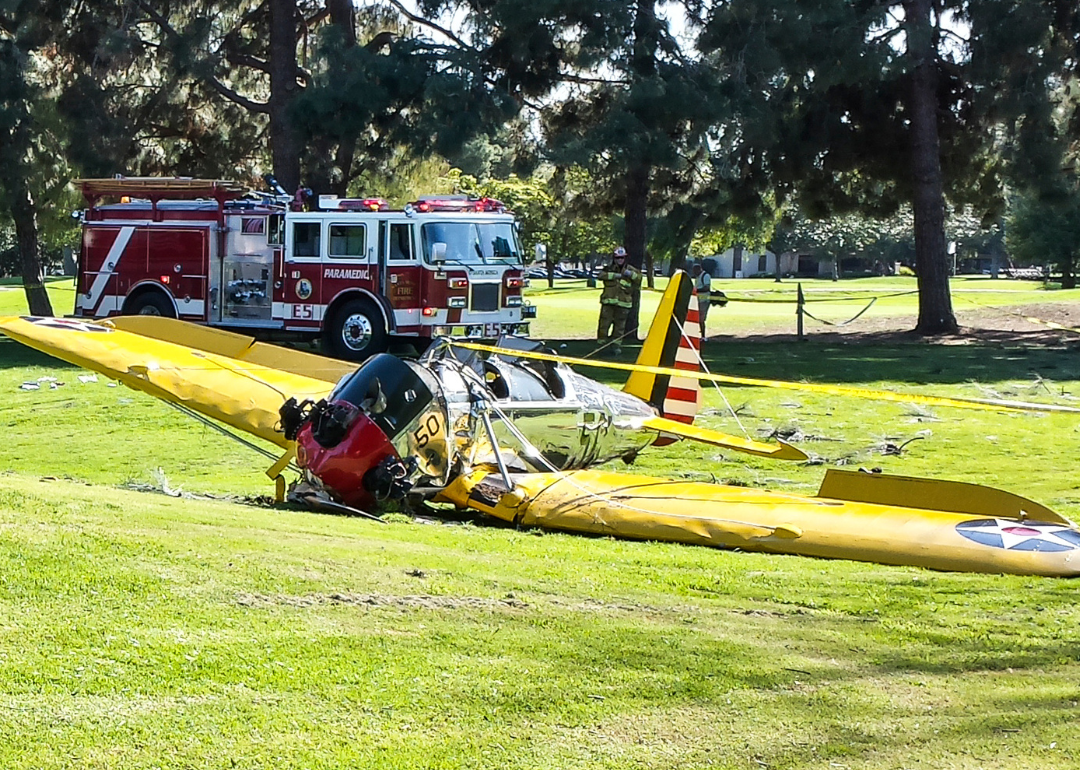 While filming “Star Wars: The Force Awakens,” Harrison Ford was severely injured in a plane crash in Santa Monica, California. His World War II-era vintage airplane suffered mechanical problems, causing the aircraft to crash around 800 feet from the nearby plane runway on a golf course. He suffered a broken pelvis and broken ankle during the accident. 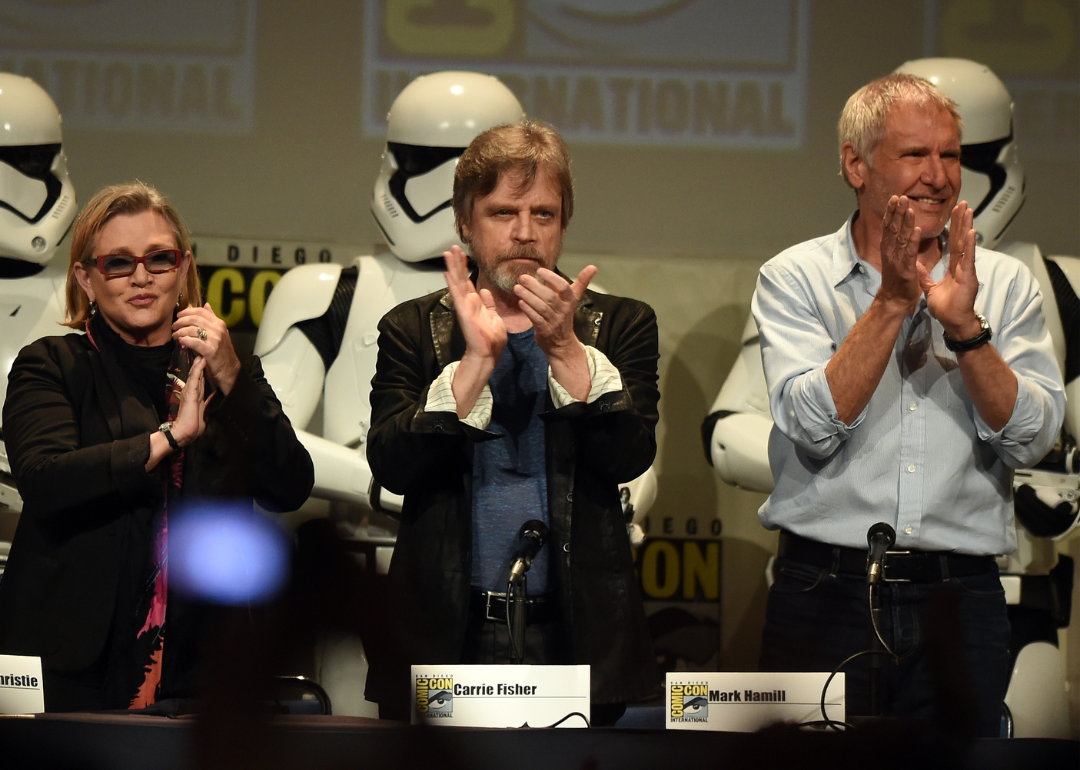 In recent years, Harrison Ford has reprised several of his most iconic roles in sequel films, but arguably the most famous example is his return as Han Solo in 2015’s “Star Wars: The Force Awakens.” He later appeared in the 2019 film “Star Wars: The Rise of Skywalker” as an uncredited vision of Han. Other examples include reprising his role as Indiana Jones in 2008’s “Indiana Jones and the Kingdom of the Crystal Skull” and reprising his role as “Blade Runner” protagonist Rick Deckard in the 2017 film “Blade Runner 2049.” 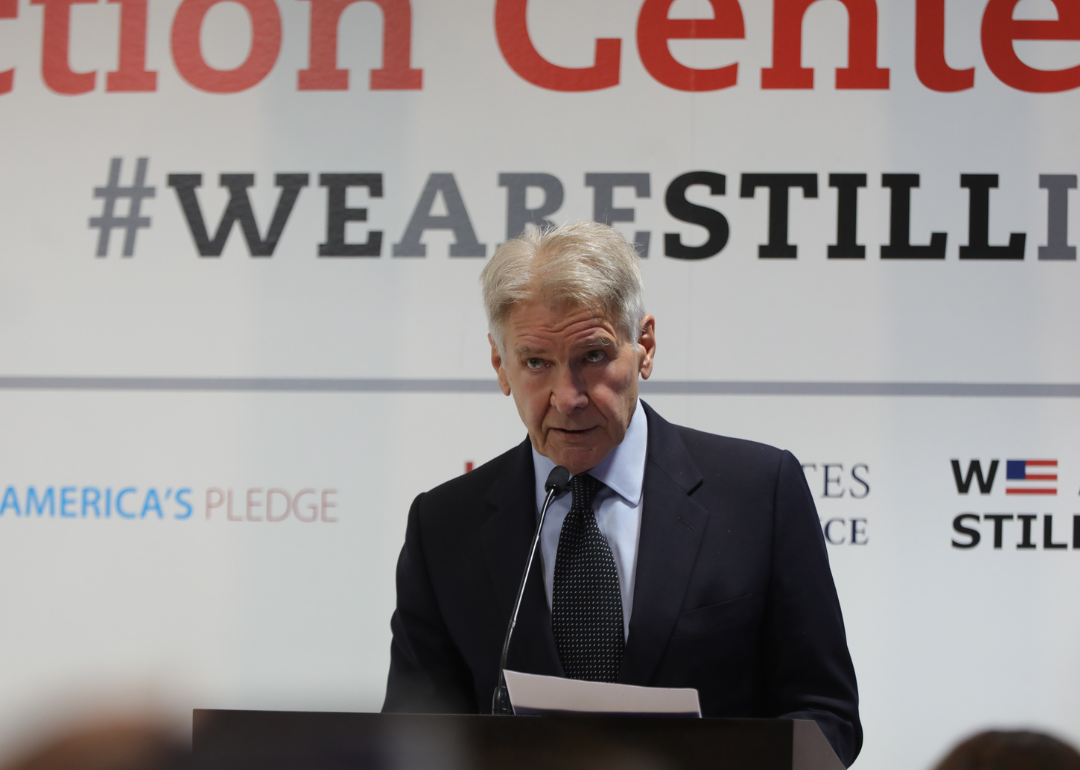 Harrison Ford endorsing Joe Biden for president in 2020—the first time he officially endorsed a political candidate—was a culmination of his status as a “lifelong Democrat.” He said he wanted to “encourage people to support candidates that will support the environment.” The actor also worked with the anti-Trump Republican organization The Lincoln Project to campaign against former President Donald Trump during the 2020 presidential election cycle.