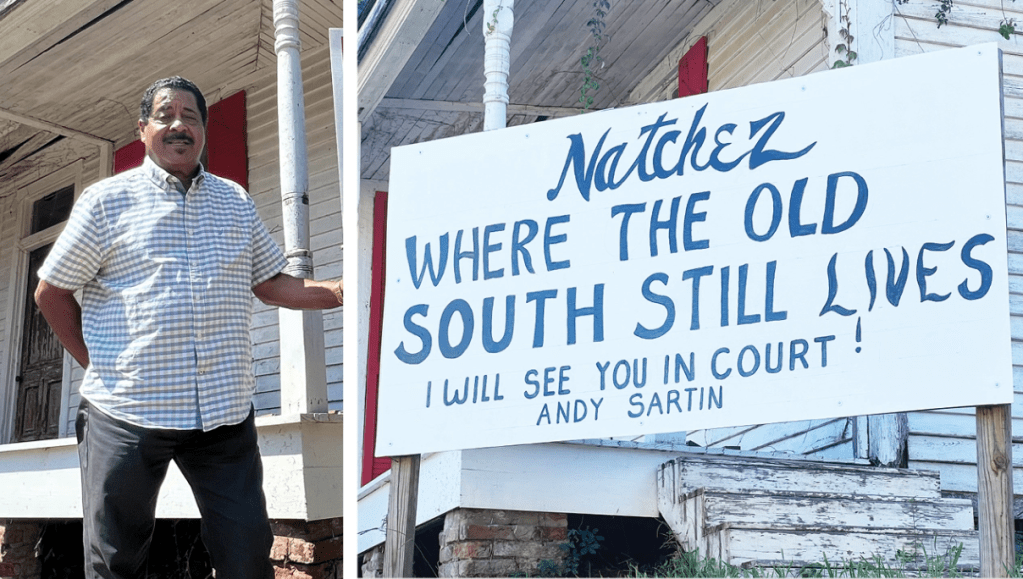 JT Robinson, left, as placed signs aimed at the Natchez Preservation Commission outside the former brothel on N. Rankin Street. One of the signs, right, threatens a lawsuit.

A Mississippi mayor joined the controversy surrounding a man’s efforts to turn a former Mississippi brothel into a tourist destination and his frustration with government officials who say he isn’t doing enough to keep up the property.

Natchez Mayor Dan Gibson responded to a “slanderous sign” posted outside the house that once belonged to the famous Natchez madam Nellie Jackson, whose business was legendary throughout the South until she died when a disgruntled man set fire to the home.

The newest owner of the house, JT Robinson, has placed signs in front of the house since a September Natchez Preservation meeting, at which concerns about the house’s dilapidated condition were addressed. The signs address the Preservation Commission and its chairman, Andy Sartin, and threaten a lawsuit.

“I don’t like it when anyone is maligned and especially not someone like Andy Sartin, who is a volunteer and is one of the best at what he does,” Gibson said. “He is not paid a dime and it’s a difficult position to be in.”

Robinson said he happened to be at the meeting uninvited and was “blindsided” by the commission’s remarks despite his efforts to rehabilitate the house. However, Sartin said what Robinson witnessed at the meeting was a formality to address complaints Sartin received about the condition of the house. Because no formal actions were being taken, Robinson did not need to be notified, Sartin said.

Gibson said he stands behind Sartin and all of the volunteers on the preservation commission.

Additionally, Gibson said he does not condone posting any signs that could be hurtful to others and that the city “will be taking any action deemed appropriate under our ordinances.”

“We do know that signs need to be properly vetted and approved. Any sign found to be slanderous will not be permitted in the city,” he said.

“I want to publicly thank Mr. Sartin for his service to our city and every person on our planning commission and our preservation commission. Theirs is not an easy task. … The day when we tolerate unkempt properties, illegal signs and other actions that go against our ordinances is past. It’s time that we enforce those ordinances and move toward a better day in Natchez for all of us.

“Our ordinances are there for a reason and if we didn’t abide by them, we would not have the beautiful city we have. Doing that sometimes puts those who serve on our preservation commission in a difficult spot but we as citizens should understand that having a Natchez we all can enjoy and take pride in is worth it. They make hard choices but at the end of the day, they’re doing what is best for the city.”