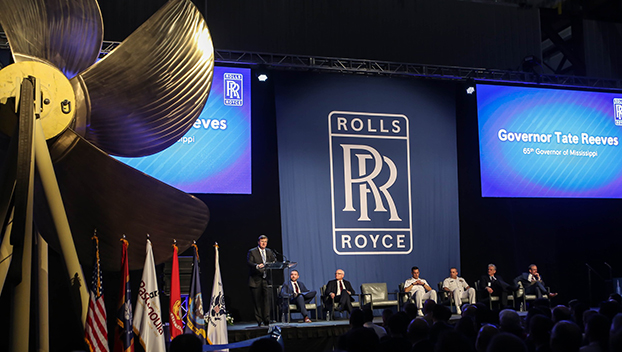 A standing ovation marked the grand opening of a multi-million dollar facility on Mississippi’s Gulf Coast to build propellers for the U.S. Navy.

The Rolls-Royce facility, known as the Center of Excellence 2 in Pascagoula, has the latest high-tech equipment to build nuclear submarine propellers and other equipment for the military. Eighty members of the company’s “growing workforce” paraded during Thursday’s ribbon-cutting ceremony, The Sun Herald reported.

“We’re the only private company that can manufacture these U.S. Navy’s largest propellers that weigh as much as a 737 (airplane) and are machined to the exacting standards that are the equivalent to a fine Swiss watch,” said Tom Bell, president of Rolls-Royce Defense and chairman and CEO of Rolls-Royce North America.

“We’ve got work,” Bell said — about three times the amount of work as the facility had just a few years ago.

The program is registered with the U.S. Department of Labor, said Rucker who is also the program’s executive officer for attack submarines.

He said the apprenticeship program is very important to South Mississippi.

“That gives more kids here on the Gulf Coast the opportunity to understand the kind of jobs that are available to them,” he said. “If you talk to the folks at this company or any other company, the biggest challenge we have around the country right now is workforce and getting people that have the skills to do these high quality jobs.”

Stephen Moffett of Pascagoula was the first to sign up to become an apprentice. He found the program while searching an internet job website, he said. Since spring, he goes to school in the morning and reports for work at Rolls-Royce in the afternoon.

“It’s an opportunity,” he said.

The apprenticeship pays his tuition, he said, and he gets a paycheck for his work.

Construction of the 26,000 square foot building started at the height of the coronavirus pandemic in August 2020, continued through supply chain issues and was completed on time, said Dan Rediger, Rolls-Royce North America head of naval operations.