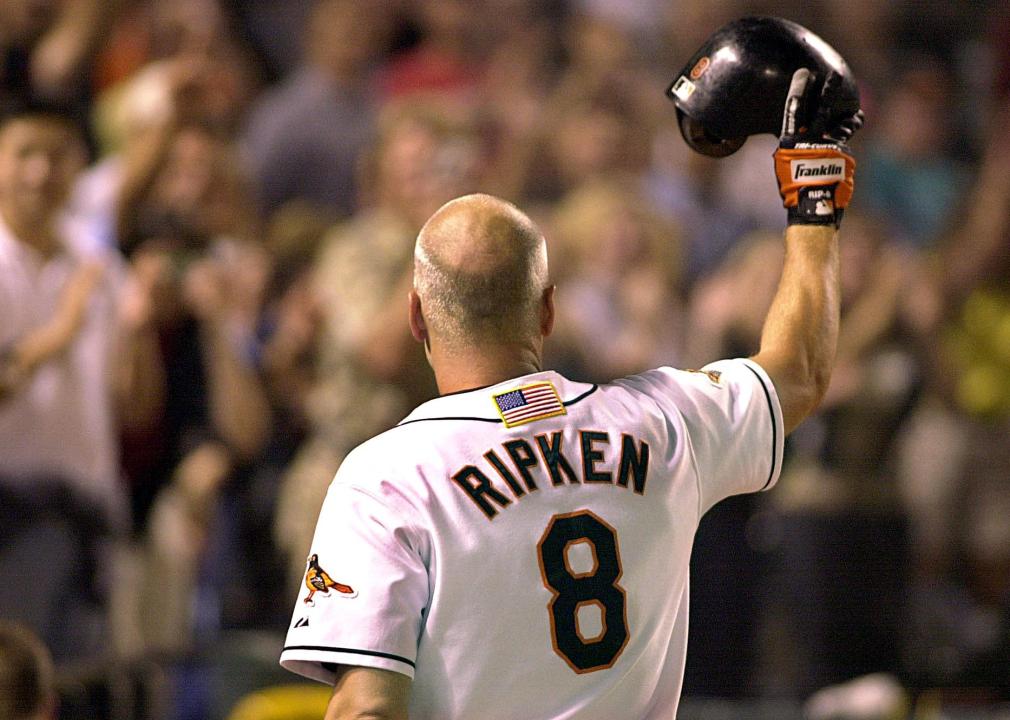 You can work well into your 60s in most professions, or even longer in politics (Joe Biden and Donald Trump are both in their late 70s). But the shelf life of professional athletes is more like that of avocados—they get soft before too long. Most are retired by the time they turn 40.

Athletes who announce their retirement before they call it a career, however, do get to take a “farewell tour.” The same goes for coaches, who have the added advantage of being able to indulge in their passion for as long as they can prowl the sidelines. During such farewell tours, these stars are celebrated around the country, cheered even by fans of opposing teams as they make their way through their final season.

Vivid Seats compiled this list of notable farewell tours in sports history based on research from news reports and sports data websites such as Stathead. Athletes and coaches were considered for this ranking if they announced their retirement before or midway through their final season. “Notable” is defined here as a retiring athlete whose accomplishments made them superstars in their respective sports. The list is sorted chronologically by year of retirement.

While farewell tours in sports got their start in basketball during the 1980s, they picked up popularity in baseball during the 2010s—four of the 15 people on this list were MLB players who retired between 2012 and 2016. 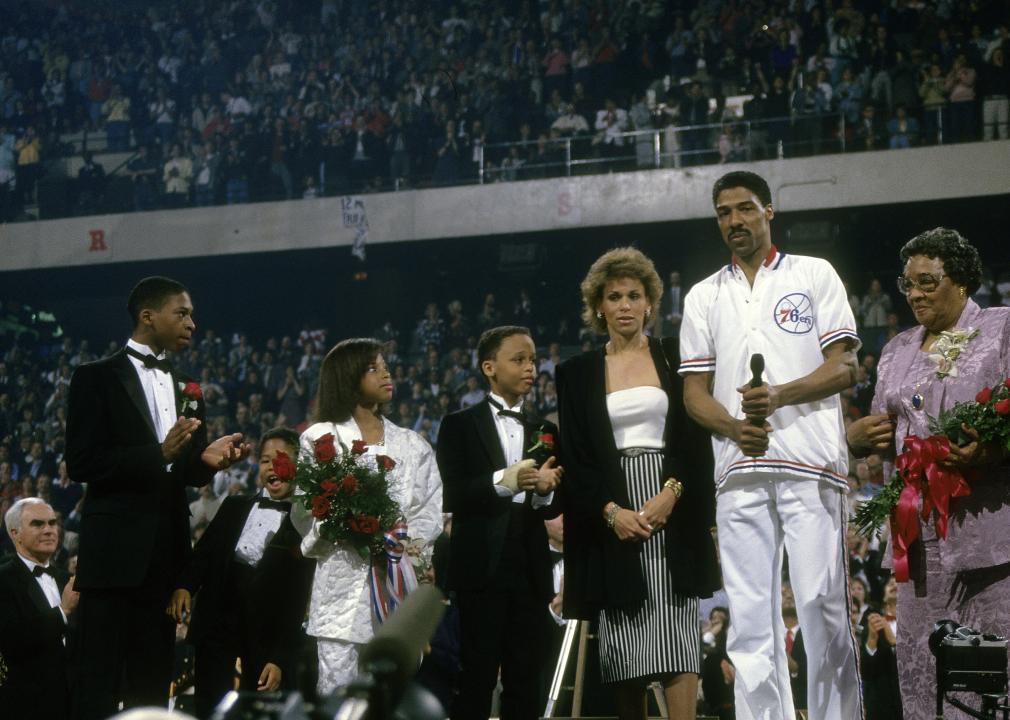 “Dr. J” was not a medical doctor, as Adam Sandler explains to his daughter in the 2022 Netflix movie “Hustle,” which includes a cameo appearance by the basketball legend. On the contrary, he was known for putting the hurt on opponents by dunking over them.

As the player who popularized the slam dunk, he was one of the few NBA stars to have his numbers retired by two teams (Nets, 76ers). Even in his final season—his farewell tour—he averaged a solid 16.8 points per game and preserved his record of leading his team into the postseason every season he played. 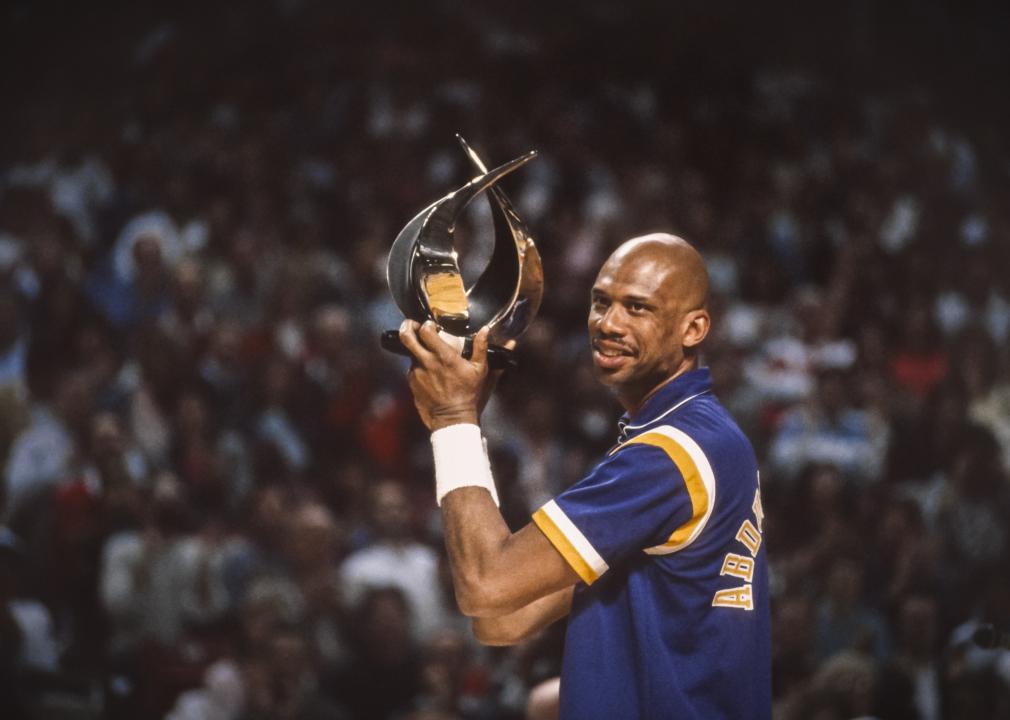 NBA stars are enjoying longer careers today, but the “big men” of yesteryear seldom made it past their mid-30s because they took such a beating under the basket due to fewer penalty calls. Kareem’s contemporary, Wilt Chamberlain, retired at 36. But Kareem waited until he was 42 to make his last layup, and had a respectable final season with the Lakers by averaging 10.1 points and 4.5 rebounds per game. 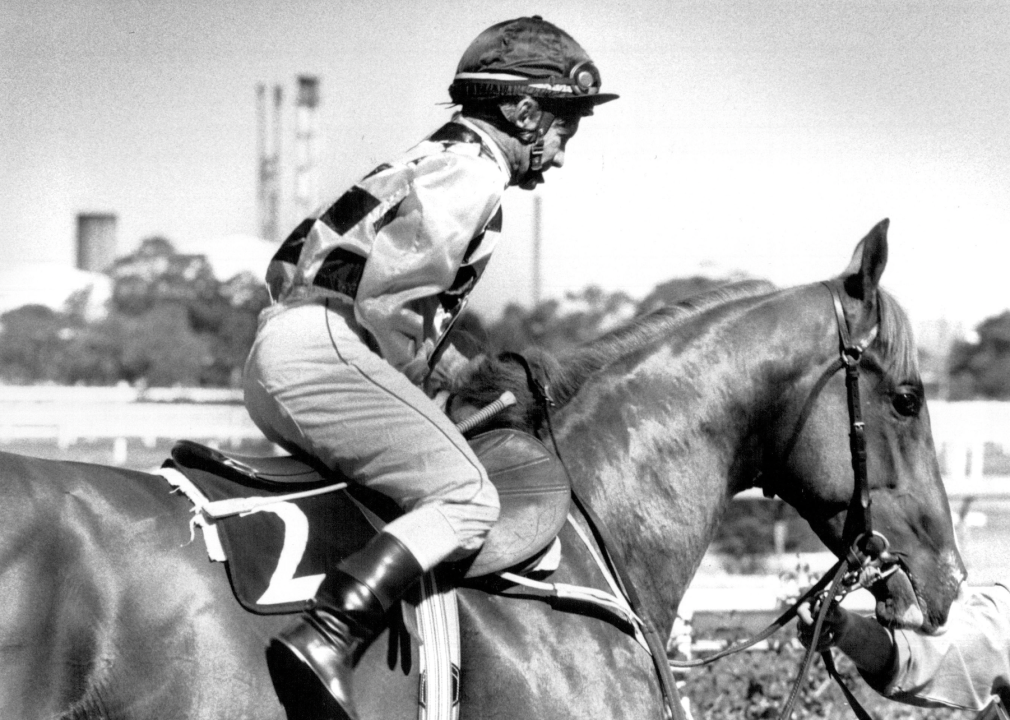 Hardly any athlete lasts for 41 years in any professional sport, but “The Shoe” enjoyed his time as a jockey so much that he refused to hang up the reins until he was 58. Why retire when you’re not only having fun but still winning races—8,833 wins and a record 40,350 race finishes by the time he retired—and earning piles of money? In a gesture of admiration, half of all the money bet on his final race (he placed fourth) was on Shoemaker, even though his horse was only given 20 to 1 odds. 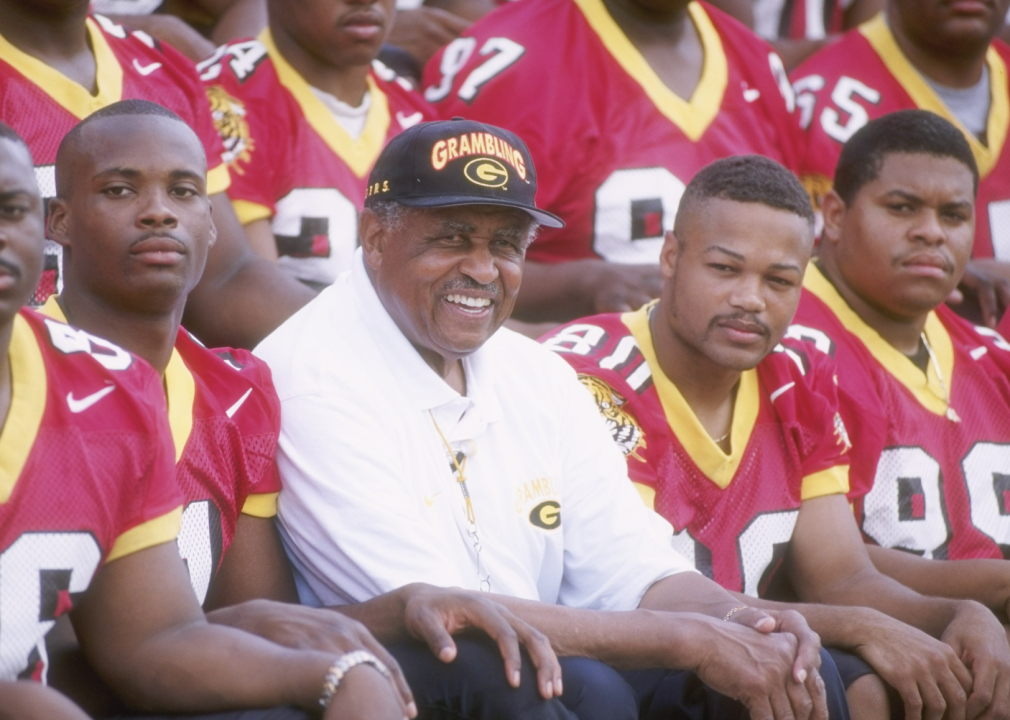 Louisiana’s Grambling State University may not be known for football the way LSU and Alabama are, but Robinson made the historically Black college a powerhouse among small colleges. Year after year, his teams kept winning until he’d racked up the third-most wins (with 408) of any coach in college football history, winning more than 70% of the time. His retirement year was awkward, however, as word got around that he might be dismissed, but college administrators were pressured into allowing the coaching legend to finish out the season at age 78. 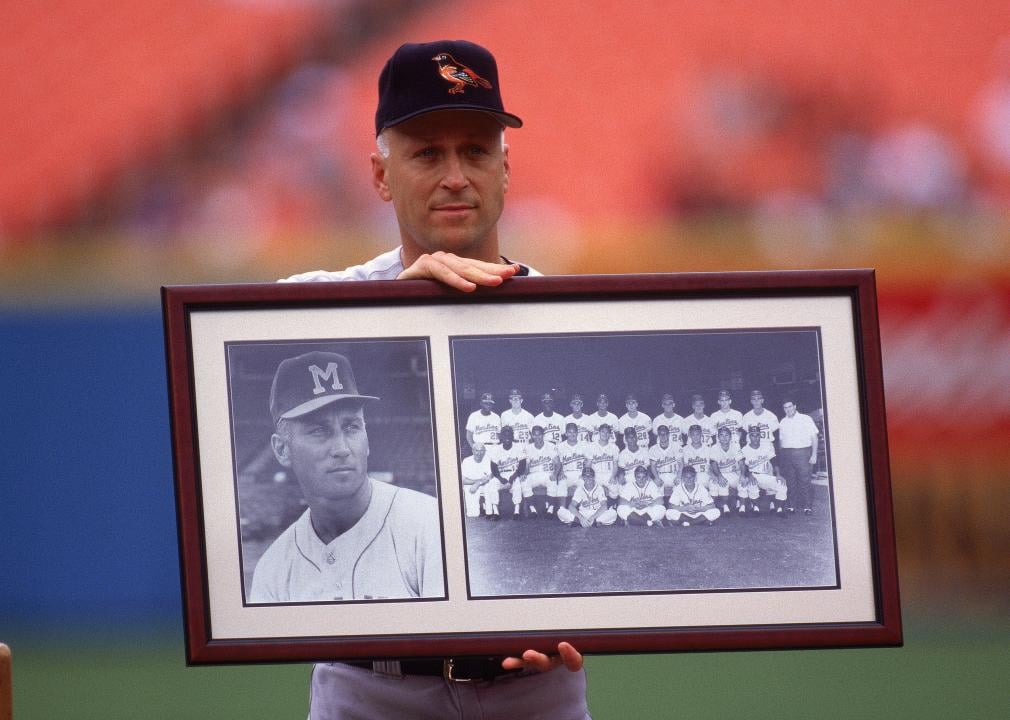 They called Ripken “The Iron Man” for his record streak of 2,632 games, which encompassed 17 of his 21 years playing for the Baltimore Orioles. But Ripken didn’t just show up. He was an all-around great, notching more than 3,000 hits, slugging more than 400 home runs, and earning two Gold Gloves for his brilliance as a shortstop. Ripken’s final season was closely watched because fans wanted the streak to go on forever. 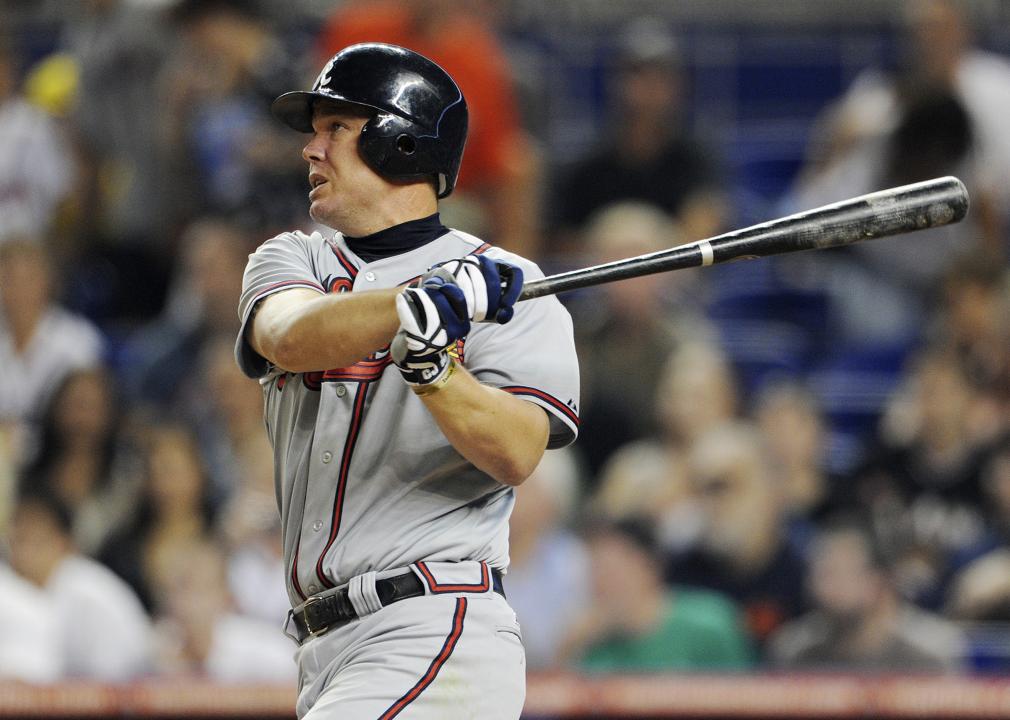 A week before the start of the 2012 season, the Atlanta Braves announced that Jones would retire when the season ended. What fans didn’t know is that the star switch hitter and third baseman would still be a major contributor. Highlights of his final season included a home run on his 40th birthday, a batting average of .318 at the All-Star break, a single in his only appearance in the All-Star Game, and another single in his final at-bat in a Wild Card game. Jones’ finest achievement may be that he led the Braves to 11 straight division titles. 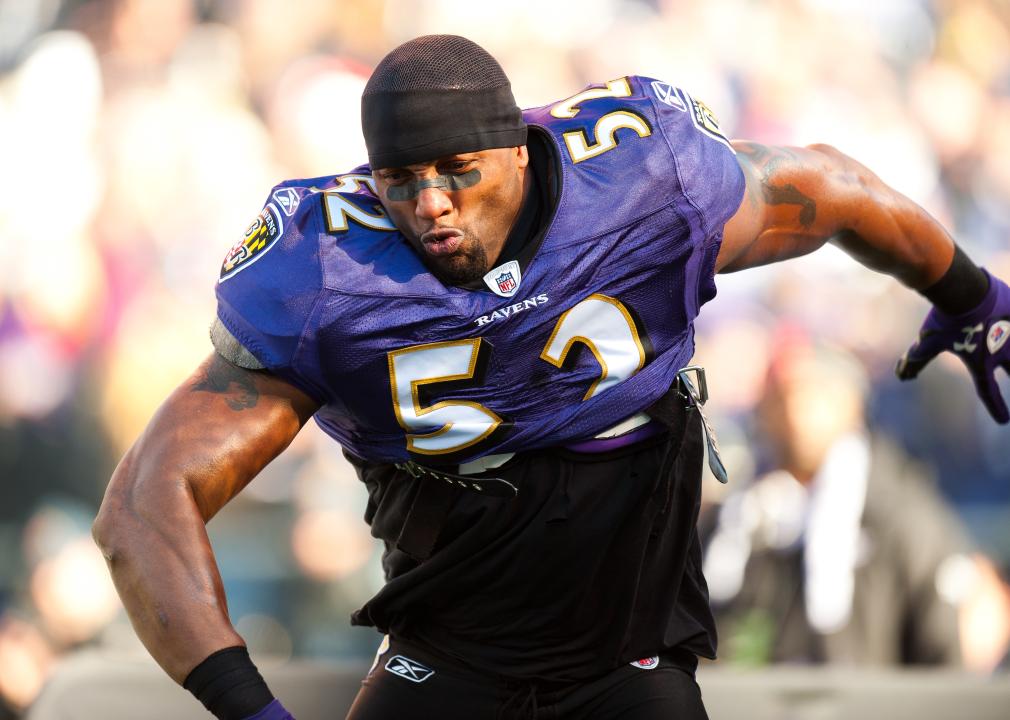 Few NFL players have inspired more heated discussions than Lewis. Baltimore Ravens fans adored him so much that a statue of him was erected outside the stadium. However, fans of other teams criticized him for “dirty” play and for his role in the stabbing deaths of two men—Lewis was given probation in a deal for testifying against two other men. Even though everybody didn’t love Raymond, his 1,568 solo and 2,059 combined tackles remain NFL records. 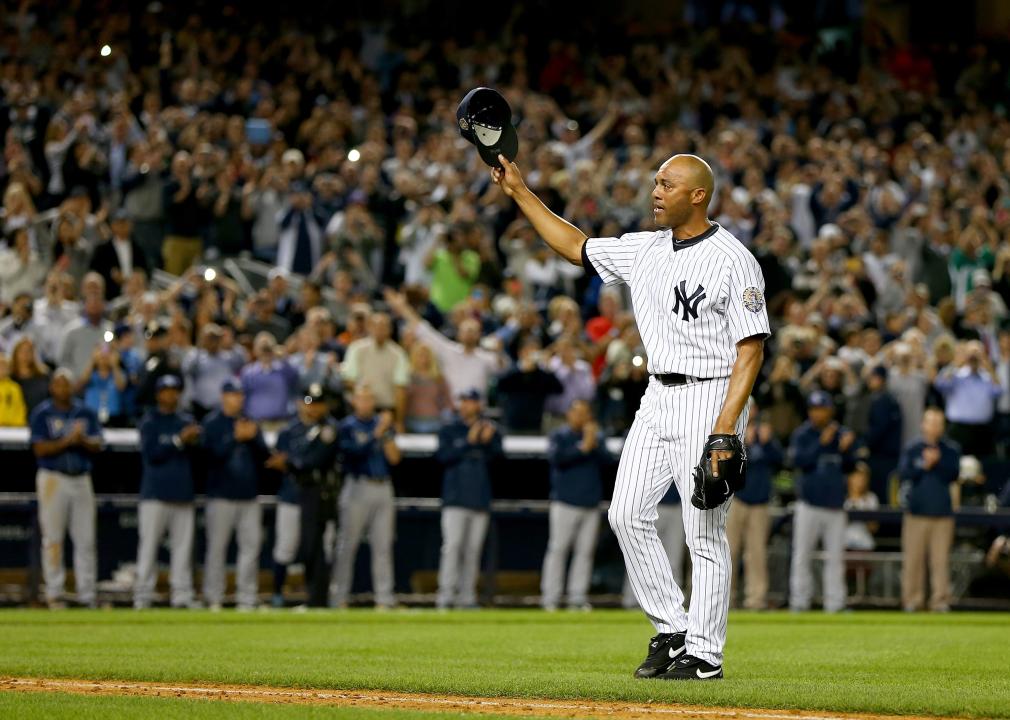 Relief pitchers don’t attract the same amount of attention as starting pitchers or home-run hitters. But Rivera was so dominant for so long that Yankees fans came to admire him as much as teammates like Derek Jeter and Don Mattingly. Besides an MLB-record 652 saves and a remarkable career ERA of 2.21, he posted an even more astounding 0.70 ERA while earning 42 saves in postseason games—two records that may never be matched.

Rivera announced his retirement before the beginning of his final season, which he completed at age 43 with an impressive 2.11 ERA and 44 saves. 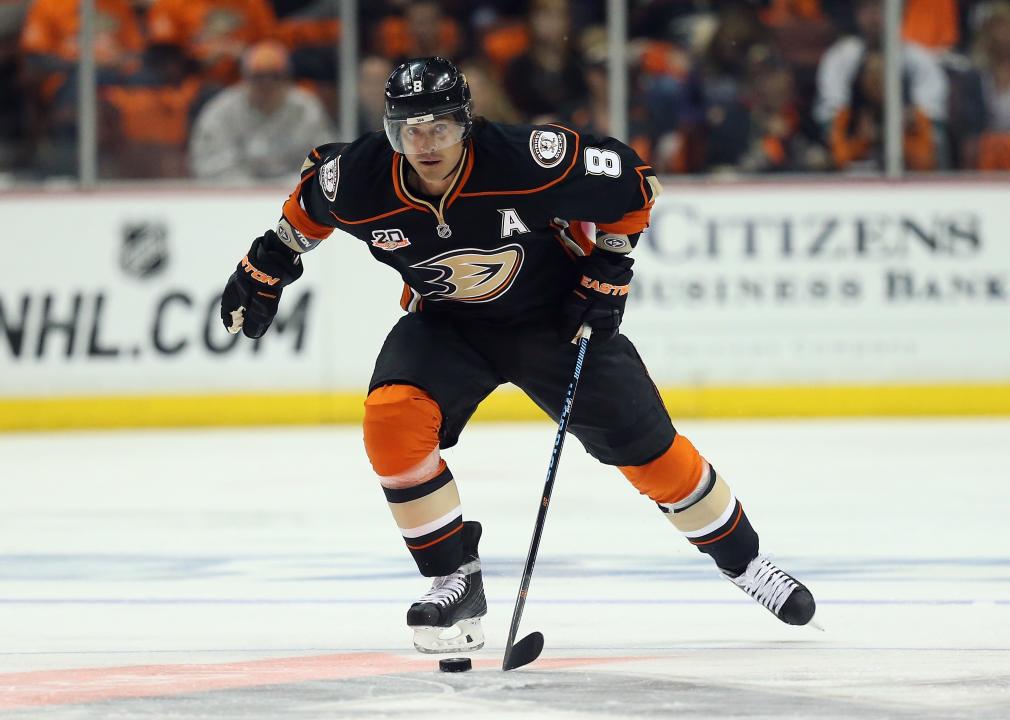 After announcing that 2014 would be his last season, Selänne was struck by a hockey stick in a game that required 40 stitches. Most 43-year-olds might consider retiring right then, but the “Finnish Flash” went on to score 27 points that season, lifting his career total to 1,457.

In his final game for the Anaheim Mighty Ducks—where he played for 14 of his 21 NHL seasons—fans gave him standing ovations every time he took the ice. 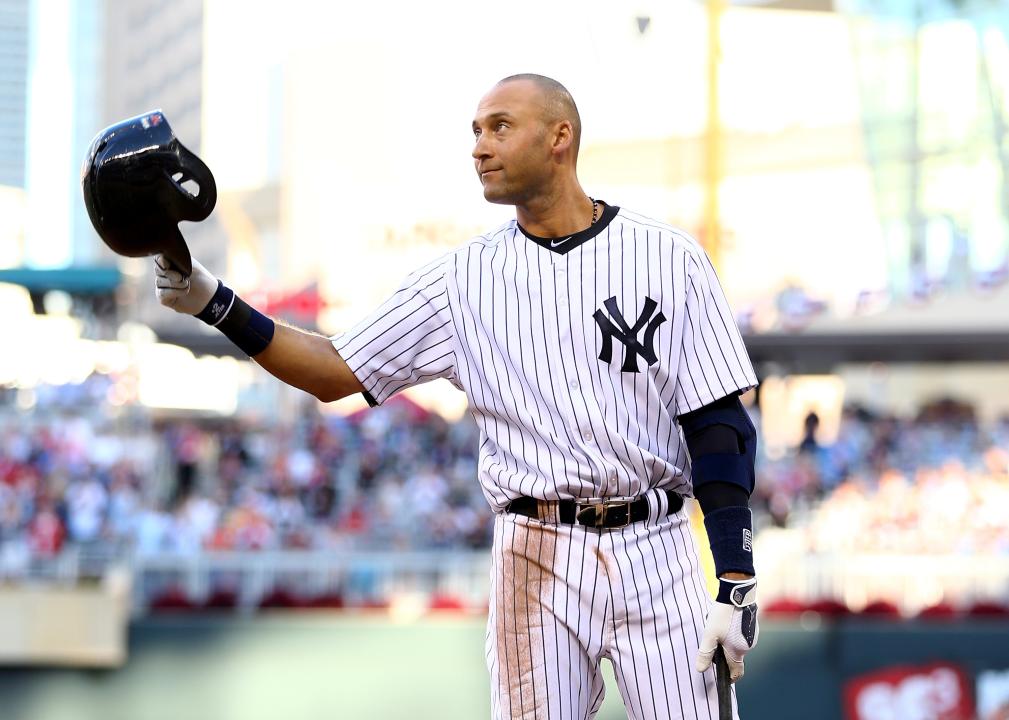 While his career as CEO of the Miami Marlins was a flop—Jeter surrendered the title and sold his shares of the team in 2022—Jeter’s career as a player sure wasn’t. First, he announced on Facebook that 2014 would be his final season. Then, he was given a hero’s send-off as each opposing team presented him with a gift. Also that season, his two hits in two plate appearances at the All-Star Game made him the oldest to do so at age 40. Jeter ended his career in storybook fashion with a walk-off single in his final at-bat at Yankee Stadium and another single in his final at-bat ever at Fenway Park. 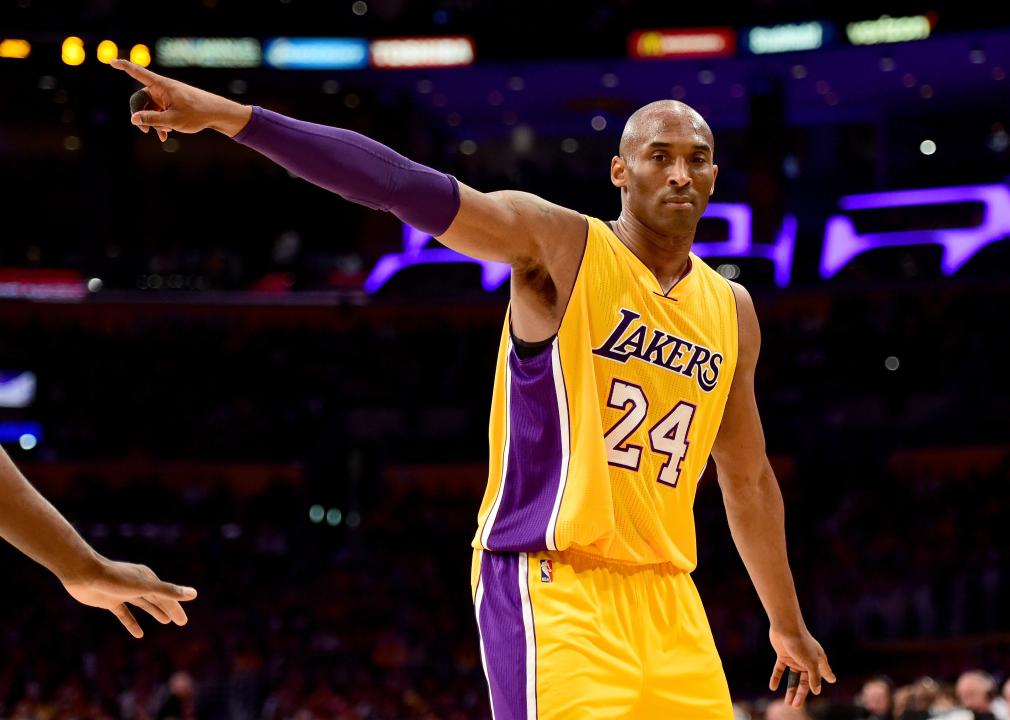 Four years before his tragic death in a helicopter crash, Kobe made the rounds of NBA cities in his final season as a legend of the sport, after announcing his retirement early in the 2015-16 season. The 18-time All Star and two-time NBA Finals MVP first set a record just for taking the court—as the first NBA player to play 20 seasons for the same team. Then he was greeted by video tributes and spirited ovations at many NBA arenas. Finally, he scored 60 points in his last NBA game, going out in style and becoming the oldest player at age 37 to score that many points. 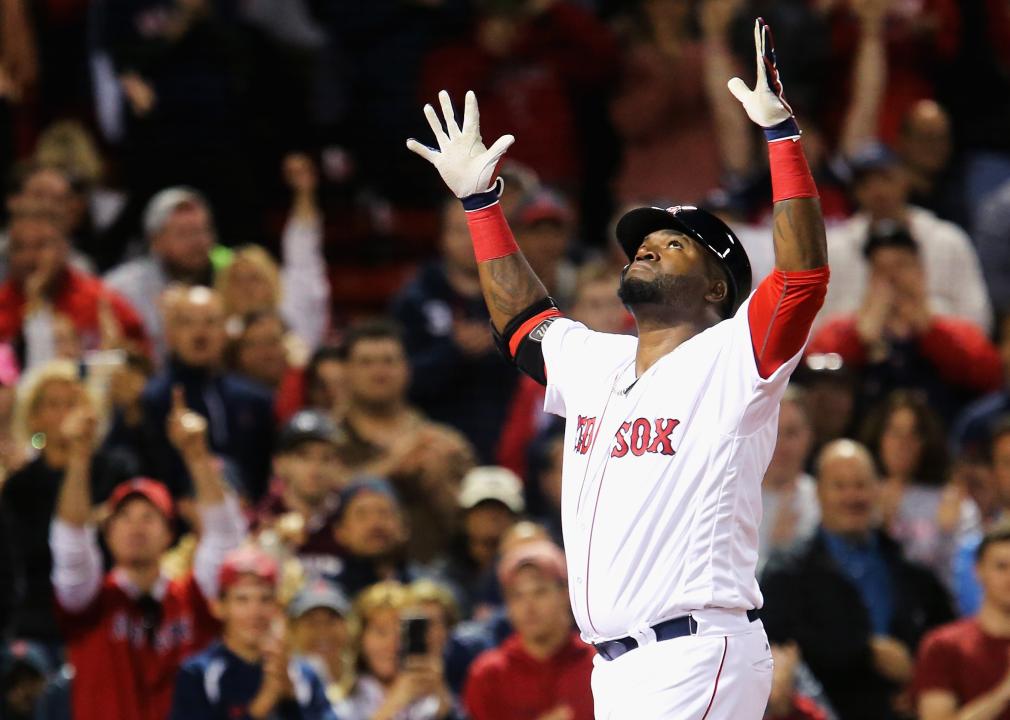 “Big Papi” was a Boston fan favorite throughout his 13-year tenure with the Red Sox, and they let him know it after he announced before the 2016 season that it would be his last at age 40. Ortiz last season proved to be one of his best. Playing as a designated hitter, his 38 home runs was the most for any final season by an MLB player and the most for a player his age—and Ortiz led the Majors in several power-hitting categories that year. His number was retired in a ceremony before his final regular-season game. 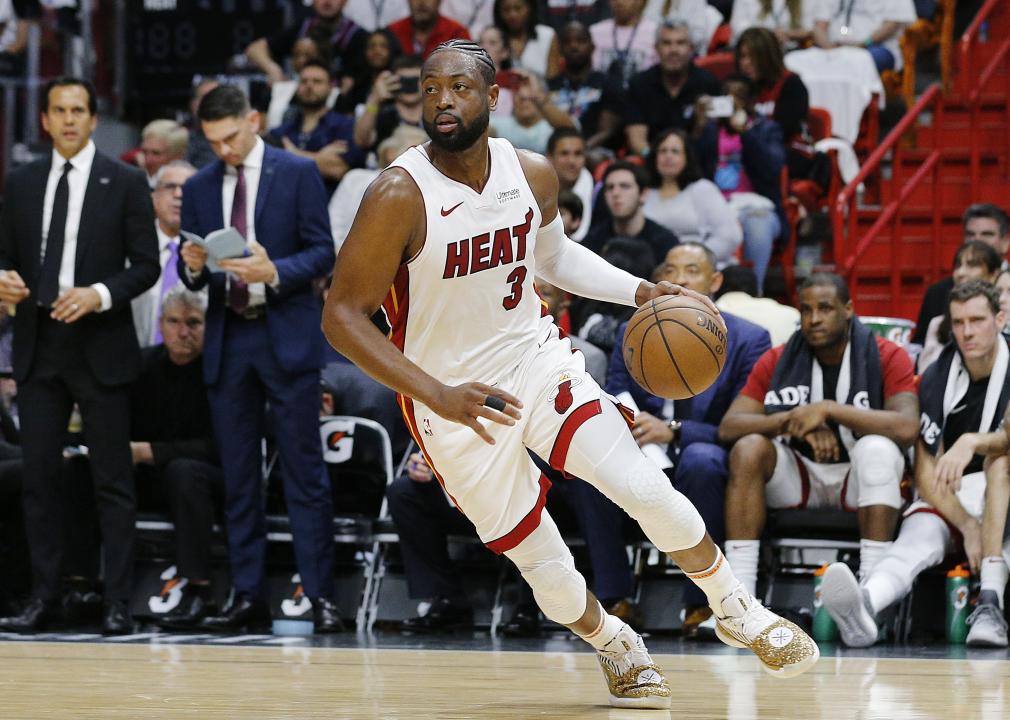 Wade was not a big man at 6 feet, 4 inches, or even the biggest star during the Miami Heat’s best years, with four straight NBA Finals appearances during the LeBron James South Beach era. But his dedication to the Heat—where he played for 12 seasons and then returned for one final season after two years with other teams—was rewarded by a fond farewell by fans.

In back-to-back last hurrahs, Wade scored 30 points in his final home game and his fifth career triple-double the following night. Before that game, he received a video tribute from former President Barack Obama and stood tall as Marjory Stoneman Douglas musicians played the national anthem. 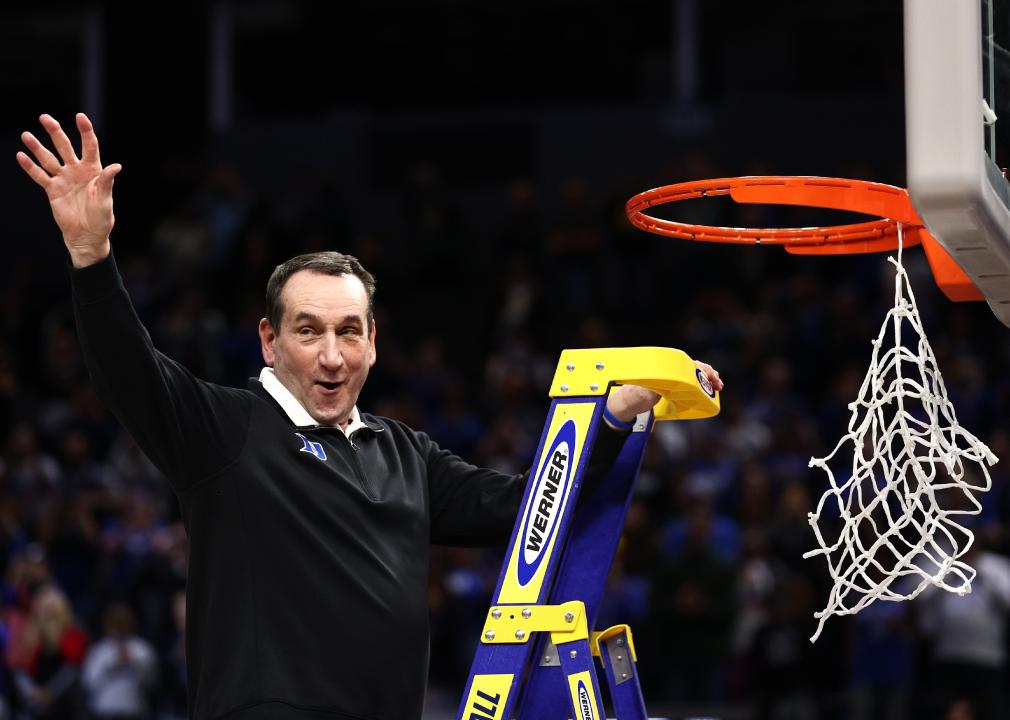 At least his first name is easy to pronounce. Mike K. may not be as famous as Mike J. (Jordan) or Mike T. (Tyson), but his accomplishments as a collegiate coach are as good as it gets, starting with five national titles for Duke and three gold medals for the U.S. Olympic team.

The buzz at March Madness in 2022 was all about whether the winningest coach with 1,202 wins in NCAA Division One history could lead Duke to one more championship. But Duke’s archrival North Carolina ended those hopes, winning a four-point nail-biter before 70,000 fans at the New Orleans Superdome. 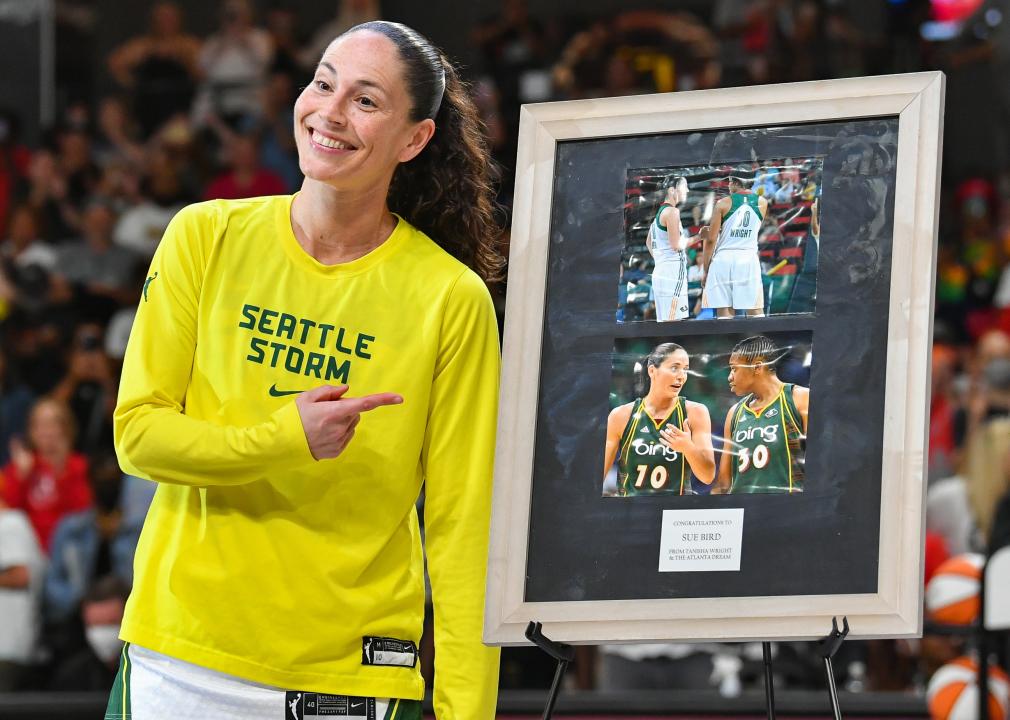 She may only stand at 5 feet, 9 inches, but Sue Bird had a huge impact on the success of the WNBA by the time her two-decade professional career ended in 2022. Playing her entire career for the Seattle Storm, she led them to four WNBA titles and led the U.S. Olympic team to five gold medals.

After announcing on June 16, 2022 that she would retire at the end of this WNBA season, Storm fans are hoping she might bring them one more title when the postseason ends in September.

This story originally appeared on Vivid Seats and was produced and
distributed in partnership with Stacker Studio.