‘If you have hogs we are coming after them.’ Mississippi hog trapper reaching millions of users with social media message, videos 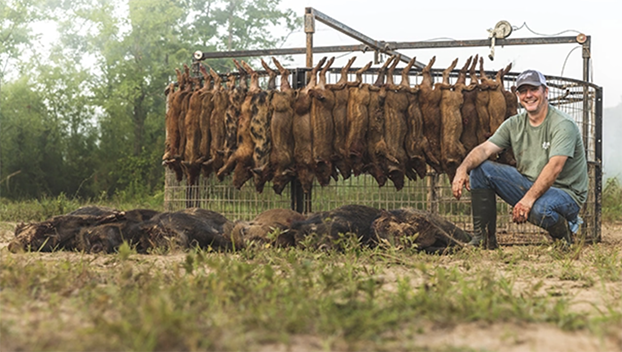 Feral Hogs continue to be an issue facing Mississippi. Each year the wild hogs cause $1.5 billion in damages according to the United States Department of Agriculture.

It is a problem for wildlife and native fauna because the hogs destroy habitat and hamper reproductive success. Additionally, hogs reproduce at a high rate averaging 4-6 piglets per litter and hog gestation periods are 114 days long.

Sows are sexually mature by 6-8 months old which is why the Mississippi Department of Wildlife, Fisheries and Parks reports that 75 percent of the population must be eliminated to maintain the same number of individuals from one year to the next.

YouTuber, turkey hunter and outdoorsman David Ellis is doing his best to help in the fight against the hogs. He started trapping hogs in 2017. It all started with him posting on social media with his bigger than life personality “Yawt Yawt,” the sound of a turkey hen’s yelp. He asked himself what he could do to help fight the Wild Hog problem around Matthiston, Mississippi.

“I started showing trapping content on YouTube and I got a sponsor for a wild hog trap. It blew up and has grown over the last couple of years,” he said. “I trap people’s hogs for a living now. If you have hogs we are coming after them. I caught 28 on Sept. 29. Being an outdoorsman, hogs take away from everything in the area. Deer lose nutritional plants and turkeys lose nests. Any wildlife doesn’t stand a chance once you get above 10-12 hogs in a sounder.”

Wild Eurasian Boars were first introduced in Mississippi near Port Gibson in 1973 according to the MDWFP. They are omnivores and are opportunistic. Signs of wild hogs are their footprints, rooted up fields by their tusks and wallows.

Hogs will eat until they are full and this leads to destruction of corn feeders, food plots and forage sites for wildlife. Ellis said if a land owner is trying to supplement feed their deer herds they are really feeding hogs once they get on the landscape.

Hogs destroy all of the work of habitat management in a night and can be frustrating. They are fun to hunt, Ellis said.

They are capable of transmitting at least 30 virulent and bacterial diseases and at least 37 parasites. Many of these can be transmitted to livestock, pets, wildlife, and even humans. Mississippi’s past Legislative session took a step to combat the wild hog population at the state level by banning transport of live hogs. MDWFP now has a permit system for people to be able to transport live hogs.

Ellis said he tries to use his social media presence to teach others about the hog problem and how to help control the population.

“I’m just an old turkey gobbling pig trapper who reaches millions of people every month by trapping hogs. The hogs are bad and I want them gone,” he said. “Since trapping has picked up, it has opened my eyes. I catch a couple of thousand hogs each year. There are more hogs out there than we can imagine. They are large in numbers.”

He said the state should consider hiring trappers to tackle the hog problem on state and federal wildlife lands. They need people who are driven to eradicate hogs like him. Mississippi needs disciplined trappers who are patient and try to catch all of the hogs in a trap so they don’t become educated on the trap.

Shooting, trapping and toxicating hogs are some of the ways humans can combat the feral hog invasion. While shooting may not be effective at eliminating the population, it can help remove hogs that are “trap shy,” according to the MDWFP. It is best for hunters to target sows as they contribute the most to population growth.

Trapping is an effective method for capturing wild hogs and the bigger the trap the better. It is best to remove sounders, a social group of hogs, from the landscape through large corrals. Toxicants are another method but one that is currently undergoing research at the state and federal level. In Mississippi, it is illegal to use toxicants so Ellis will continue to trap as many hogs as he can.

“It is something you have to stay after the hogs hard. The way we trap I try to catch full sounders at one time so you have them knocked out,” Ellis said. “If you knock out a group of about 20 then you have a whole season of them gone. Turkeys have a chance of hatching their nests.”

Ellis traps hogs for hire but he will help out landowners who may not have the funds through donations made by fans on his website yawtyawt.com. Those donations help cover the cost of trapping in an effort to remove feral hogs from the area landscape.

He said he has noticed some of the spots he trapped all the hogs in before have called him back and he caught fewer and younger hogs. The population is still a challenge but he is making some headway.

Landowners who have a hog problem of one or two hogs should take care of those quickly and it is best to do it by themselves. Ellis said when he traps he charges by the job and people seem to think they get their money’s worth with 10 or more hogs. If they have 10 or more hogs they need to call a trapper, he said.

He said landowners have first pick of the hogs harvested in the traps. They then try to give away as much meat as they can. Usually about 80 to 85 percent of the hogs killed in the summer are given away and in the colder months it is a lot higher, the meat doesn’t go bad.

“We process the meat and give it away. Grandma may not be able to clean a hog but she can cook it in her crockpot,” he said. “I give a lot of it to people who need them. It is good for them to eat, they don’t really need to worry about diseases as long as they keep the grease hot. When you can bring a hog for someone it helps them out.”

Mississippi Department of Agriculture and Commerce offers a Wild Hog Control Program to aid landowners in trapping wild hogs. Right now applications are closed for traps from the program but information can be found on the MDAC website.