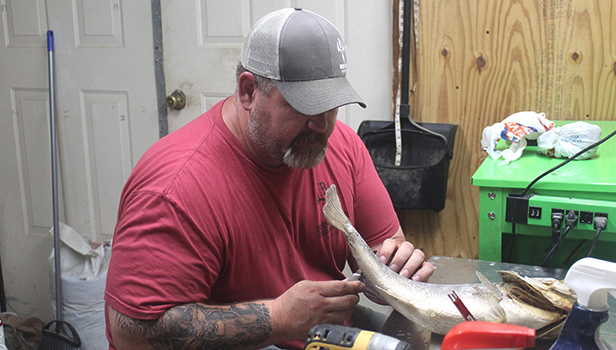 Brent Opdyke works on painting individual fish scales on a bass in his shop. Each scale has to be individually painted with a wide range of colors. It is a time consuming process but one he enjoys.

Brent Opdyke held a plaster knife in his hand as he opened the door to his shop behind his house. Extending a hand he gave a handshake, behind him a largemouth bass sat on a table. He was working on getting it taxidermied for his business Brent Opdyke Taxidermy.

His business started about six years ago when one day his wife asked him why he didn’t try to make money off of taxidermy. Opdyke at the time had a collection of skull mounts he was working on for himself.

Thanks to his friends, he was able to mount a few deer to get started and learn more about the process. Slowly he turned a storage shed into a working taxidermy shop. It is a part-time venture as he works in Law Enforcement. Each year, 50-60 deer come through his shop on top of fish, ducks and other game.

“I enjoy doing it. It enables me to do my own thing. It has kept growing and I hope to one day retire with this,” Opdyke said. “I have been self-taught through research and talking to other people in the industry. I have been able to improve but I mainly stick with it because I enjoy it.”

He said some of his first deer heads did not come out very well and a friend let him practice on a duck. It has sat on a desk in the shop and collected dust over the years. Even now, he isn’t proud of that finished product but can see the improvement from that first duck to two pen-raised pheasants he proudly displays on his wall.

Time is the biggest cost in taxidermy. Each deer season, Opdyke spends hours away from hunting and his wife to get deer mounts done. Every customer offers a chance to learn something new while working on the product.

People interested in Taxidermy can simply start by getting their hands dirty and trying. It was the only way he could improve and of course having contacts who might offer advice helps too. Of course, each animal is going to be different and have its own issues.

“They are all pretty in their own way. I enjoy when someone comes in here with a big deer or a big fish and they say man that is awesome after it is finished,” he said. “They can take it home and be proud of it. Every time they look at that deer they will remember that hunt. Every deer has something behind it and means something.”

It could be their first deer, one they took with their dad’s gun or the first deer they harvested since losing a close family member. Each mount has its own story and preserving that memory is why he continues to do taxidermy. Over the years, he has met a lot of good people.

Sometimes a deer will have a specific scar and people will ask him to leave it or fix it. He washes the hide, fleshes it out, sulfates it and shaves it which takes several hours. Opdyke works on one deer at a time. When he finishes one deer he works on the next one. Bow season kills might take a month and a half because he has less to work on. Gun season he will take measurements and store hides in the freezer because he does not have the time to work on everything.

There is a huge influx in December. Shoulder mounts take priority, he said. It is a time when the shop becomes a triage station, in a way. Mounts could take anywhere from four to six months — the industry standard is about a year according to Realtree.

Deer are not the only animal he works on. However, there are challenges that come with different animals. For example, coyotes, foxes and bobcats are difficult because they start going bad very quickly. The fur will come out in clumps and it has to be pretty fresh. Birds have a lot of feathers and it takes a lot of patience to get them to look right.

Sometimes with a predator, he has to get the form changed for an animal to have the right pose.

Fish are one of the animals he enjoys working on outside of deer. Anglers do not need to clean their catch but they do need to get a picture of it soon after it gets out of the water. Odyke said he likes to paint the fish and get it as close to the color as possible using about 16 colors. One fish could take up to 8 hours to paint because each scale must be painted individually. Airbrushes, makeup applicators, paint brushes and charcoal all go into getting a fish to look natural and with splendor. Perch, alligator gar, bass or red fish, Odyke takes on the challenge.

As a public service announcement for all taxidermists, Odyke said there are a few things sportsmen can do to preserve their harvest if they want it to be taxidermied.

Opdyke is participating in the CWD sample collection as a taxidermy partner with the MDWFP. He said all he needs is the name, phone number, county they killed it in, species, gender and age. All he does is fill out a card and pulls out the lymph nodes for the MDWFP to collect.