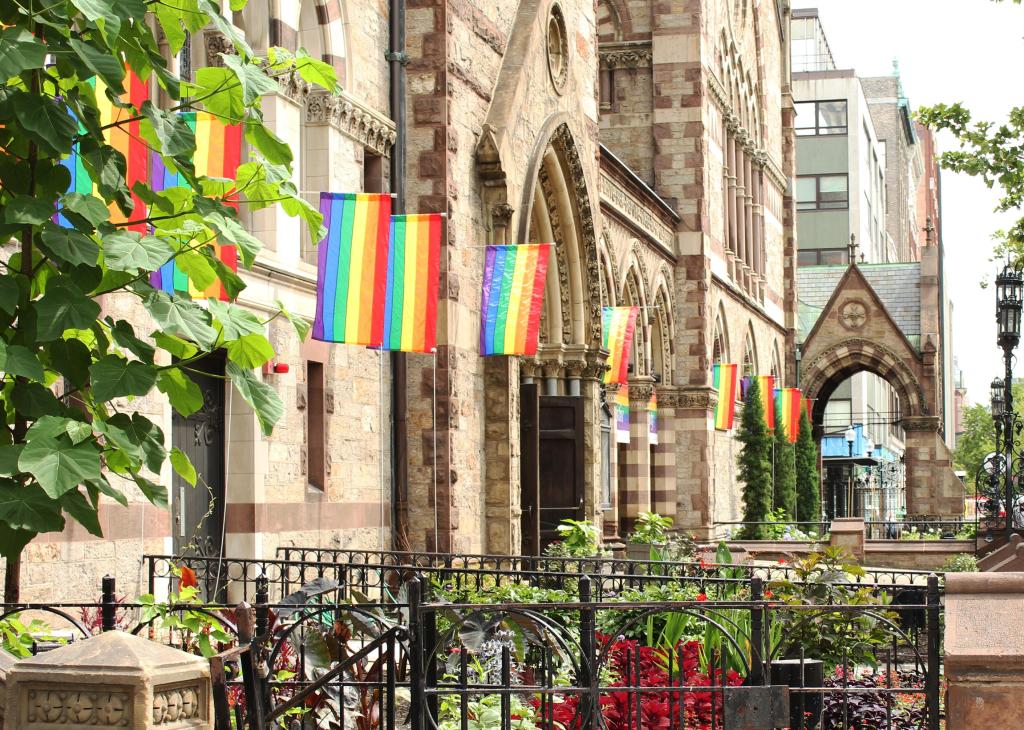 While faith and religion play a vital role in the lives of many Americans, the number of religious adherents is declining. An estimated 7 out of 10 Americans identify as religious, according to a 2020 Pew Research study. This includes 64% of the U.S. population identifying as Christian, a drop from the 90% reported in the early 1970s. Another 6% are members of other faiths, such as Judaism, Islam, Hinduism, and Buddhism. The remaining three-tenths of the country comprises those who are religiously unaffiliated, a demographic that only made up 5% of the population a half-century ago.

While the numbers may be declining, most Americans still identify as religious. That said, data indicates that one demographic is significantly less religious than the general population: the LGBTQ+ community. Less than half of all LGBT adults consider themselves at least somewhat religious, according to the Williams Institute at UCLA School of Law, an academic research center focused on public policy pertaining to sexual orientation and gender identity.

The chasm between the religiosity of the queer community and the general population may not be surprising, given the historically complicated relationship between religious communities and LGBTQ+ people. While there is no shortage of churches, synagogues, or other religious organizations that fully include and affirm the identities and relationships of LGBTQ+ folks, other faith-based institutions have been criticized for their harmful, discriminatory practices. This can range from allowing queer people to be part of a congregation while disqualifying them from becoming leaders or clergy members based on their sexual orientation or gender identity to refusing to marry same-sex or queer couples or attempting to change the sexual orientation or gender identity of LGBTQ+ congregants through discredited practices like conversion therapy.

While many religious communities have garnered a reputation of antagonism toward the LGBTQ+ community, it is notable that many queer people still identify as religious. Stacker examined data compiled by the Williams Institute at UCLA School of Law to see how religiosity breaks down among members of the LGBT community in the United States. Researchers used U.S. Census data and Gallup polling to determine the estimated number of religious LGBT adults throughout the country. Respondents who said they identified as lesbian, gay, bisexual, or transgender were considered LGBT and were not asked whether they identified under the broader umbrella term LGBTQ+.

You may also like: Countries with the biggest income disparity 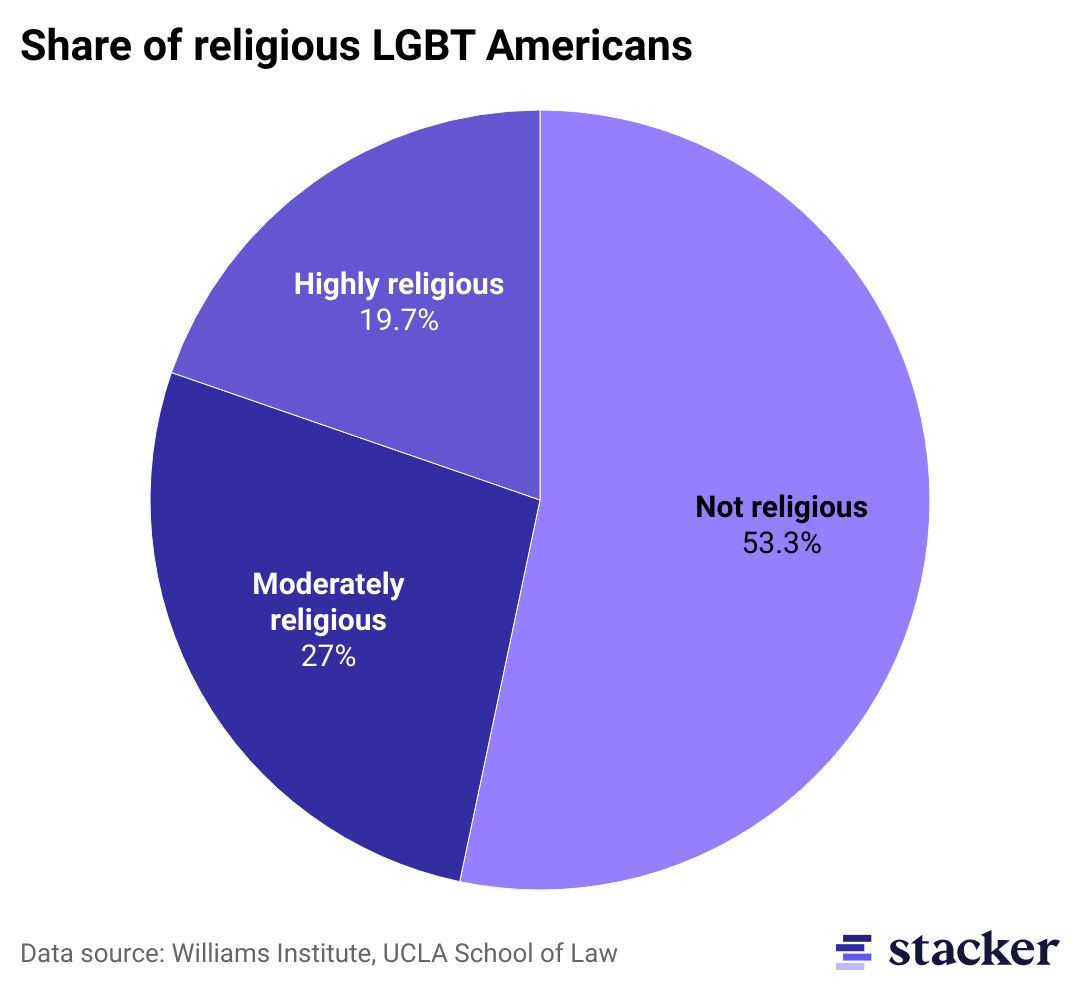 More than 11 million people in the United States identify as lesbian, gay, bisexual, or transgender, according to the Williams Institute. Among those who identify with these labels, about 3.1 million consider themselves moderately religious, while another 2.2 million are highly religious. Combined, these two groups comprise about half of the LGBT population. 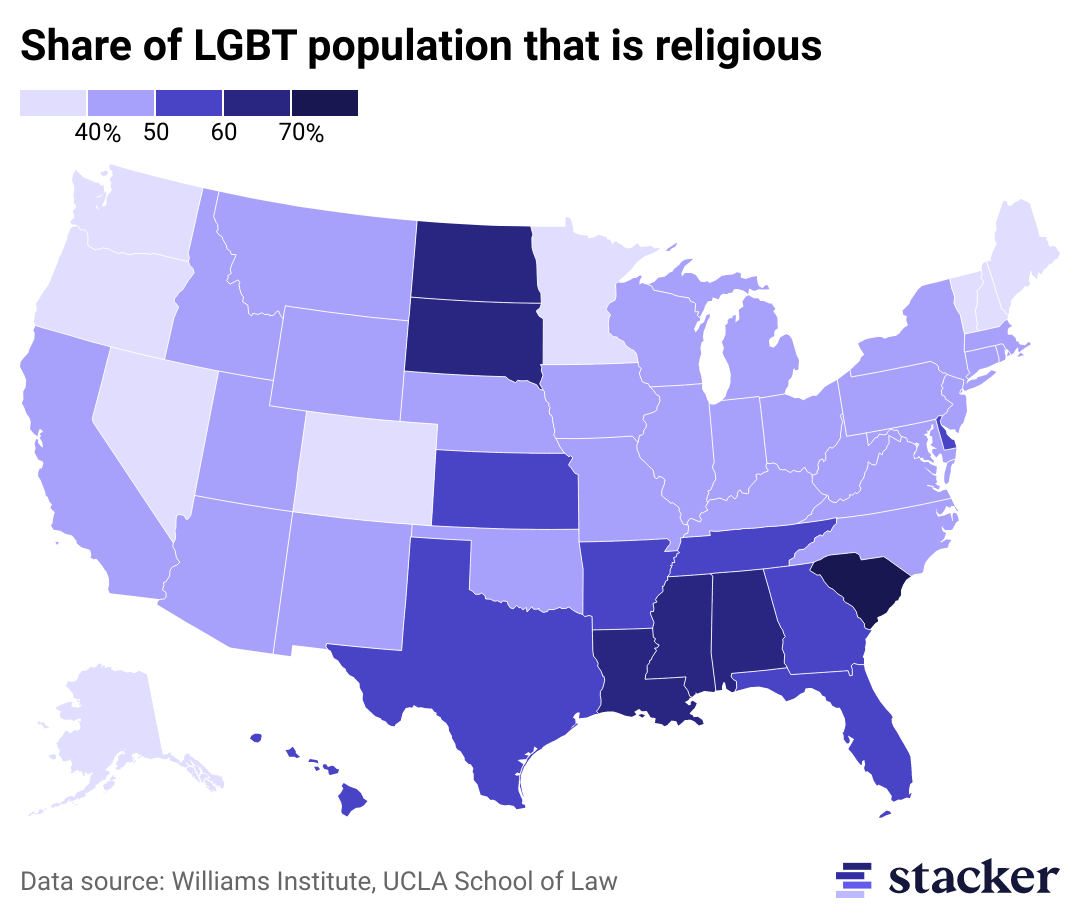 Much like the general population, the percentage of LGBT people who are religious varies by state, with the most religious populations found in the South, particularly in the Bible Belt region. The number of religious LGBT adults in the South is just shy of 2.1 million people, which eclipses the smallest share of less than 900,000 in the Northeast. Sitting in the middle, the Western U.S. has nearly 1.2 million religious LGBT adults, while the Midwest has slightly fewer than 1 million.

South Carolina has the highest share of religious LGBT people at 74%, closely followed by Mississippi, Louisiana, South Dakota, and Alabama. Meanwhile, states like Alaska and Maine are tied with the lowest percentage of LGBT people who are religious, each at 31%, while states like New Hampshire, Oregon, Vermont, and Washington hover just slightly above. 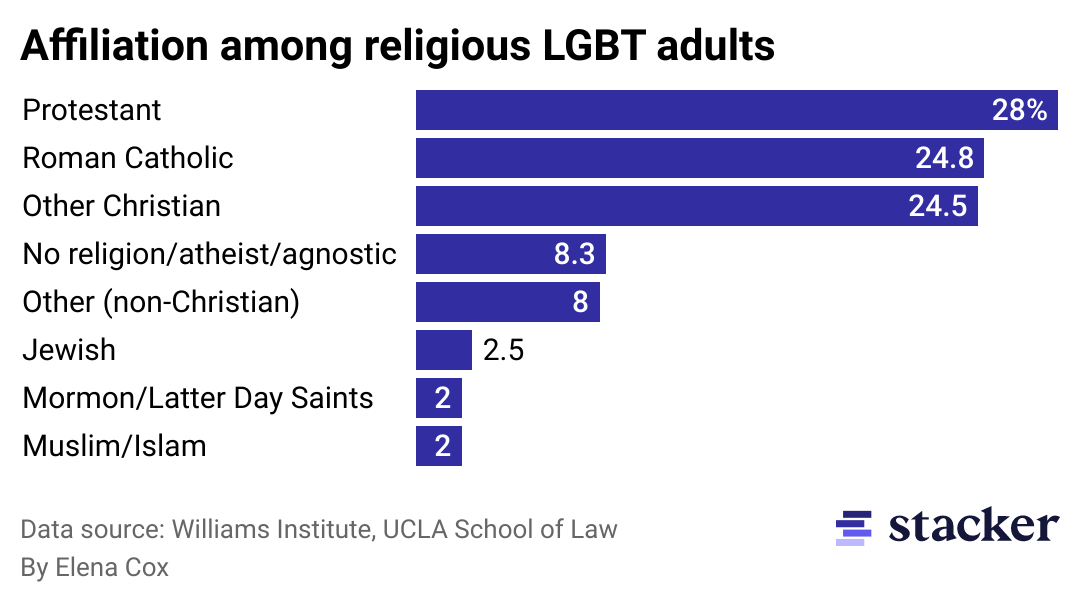 Most religious LGBT adults in the U.S. (over 4 million) identify with the Christian faith, whether Protestant, Catholic, or other Christian denominations. Meanwhile, more than 130,000 LGBT American adults are Jewish, over 100,000 are Muslim, and another 100,000 are Mormon. An additional 420,000 are affiliated with another unspecified non-Christian religion.

The Human Rights Campaign has a helpful resource on its website that serves as a guide for understanding the spectrum of positions on LGBTQ+ equality held by various faith traditions. The list includes an explainer on queer inclusion policies and stances among 22 different Christian denominations, four branches of Judaism, as well as Islam, Buddhism, Hinduism, Humanism, and Unitarian Universalism. Teachings from these faiths can range from full inclusion or celebration of LGBTQ+ people and identities to outright condemnation and rejection of same-sex relationships and transgender identities. It also includes a position that lies somewhere in between, such as churches that take a “welcoming but not affirming” stance toward LGBTQ+ congregants. 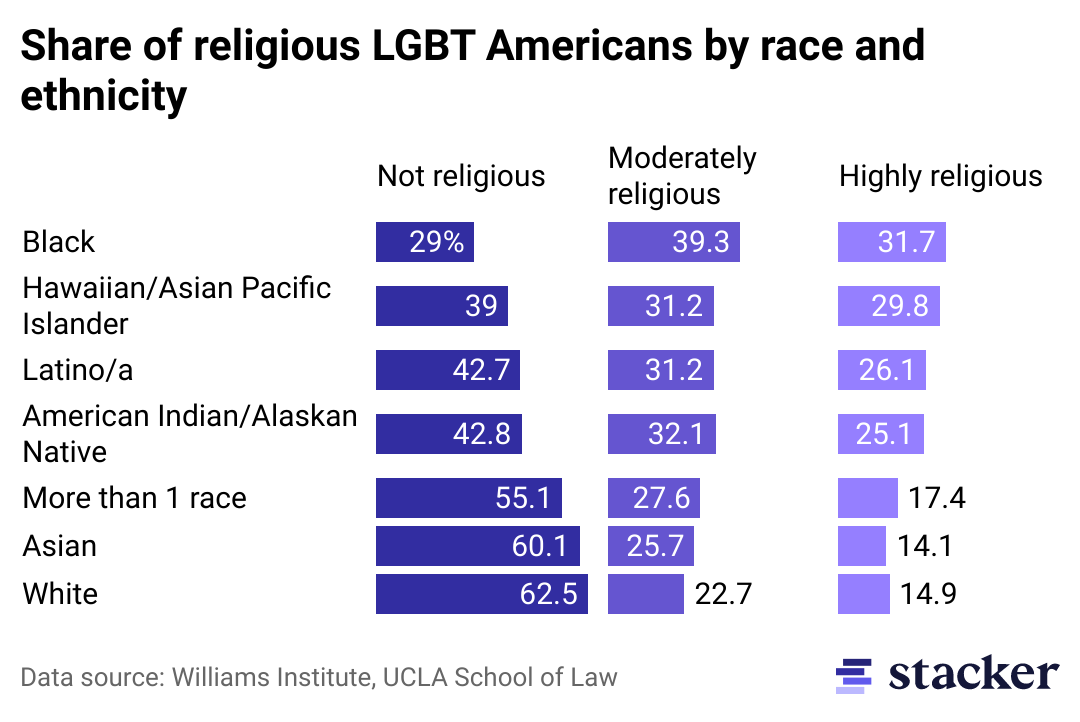 Religiosity by race and ethnicity

Black LGBT Americans represent the most religious group out of all races and ethnicities in the LGBT population, with 71% considering themselves highly or moderately religious. Comparatively, only 37.6% of white LGBT Americans identify as religious, making them the least religious of all racial or ethnic groups in the queer community.

These ratios don’t vary significantly from those seen in the general population. The Pew Research Center’s 2014 Religious Landscape Study shows that 3 in 4 Black Americans and about 3 in 5 Latinos consider religion very important in their lives. Conversely, only about half of white Americans and 36% of Asian Americans feel the same way about the importance of religion.

The Williams Institute study indicates that the religious LGBT population tends to skew much older. Nearly 65% of LGBT adults over 65 consider themselves religious, compared to just 38.5% of those between the ages of 18 and 24. For the most part, this aligns with the general population as 65% of all Americans over 65 consider religion very important, compared to only 40% of those between the ages of 18 to 29, according to the Pew Research Center study. A study from the American Enterprise Institute suggests that younger generations are less likely to be brought up in a religious household, and evidence shows that those who were are increasingly distancing themselves from religious affiliation. 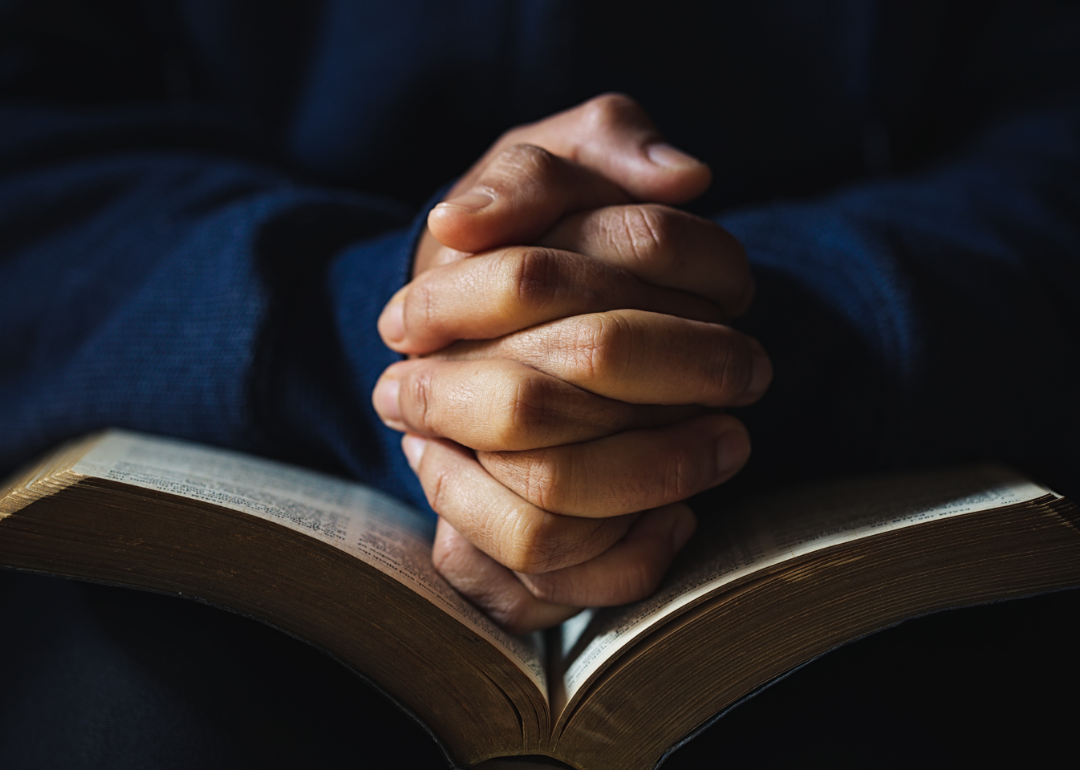 Organizations such as the Human Rights Campaign and Strong Family Alliance have assembled affirming religious resources for LGBTQ+ people of faith. These include resources for those coming from Christian, Jewish, Muslim, Buddhist, Hindu, and other backgrounds. Stacker spoke with a few leaders from organizations that support religious LGBTQ+ people from different faith traditions.

Marianne Duddy-Burke, executive director of DignityUSA, an organization supporting LGBTQ+ Catholics, noted the gap between the religiosity of the queer community and the general population, as indicated by the Williams Institute study.

“I was really disturbed about the ways in which so many religions’ condemnation or lack of welcome for queer people shows up in that gap,” Duddy-Burke told Stacker. “I think that was the most important message of that study that didn’t seem to get picked up in a lot of places. If I were a mainstream religious leader, the message to me would be we’re really failing our community here.”

DignityUSA has been around since the late 1960s and has been at odds with the Vatican for decades over the Catholic church’s official position on same-sex marriage and LGBTQ+ inclusion. “We believe in sacramental equality,” Duddy-Burke said. “Queer people are banned from marriage or being ordained as priests. In some places, the kids of queer parents won’t be baptized. We say all church sacraments should be equally accessible to everyone.”

According to Duddy-Burke, as an organization that has been banned from using Catholic church resources and properties for its programs, DignityUSA prides itself on offering “spiritually affirming places” for LGBTQ+ Catholics and allies. This includes liturgies and networking events for parents of queer youth and community groups geared toward young adults, transgender people, and people of color. The organization also engages in activism work, including speaking out against firings of queer employees in Catholic institutions or anti-trans policies in Catholic schools.

Asher Gellis, CEO of JQ International, a Jewish LGBTQ+ organization, was surprised by the number of queer U.S. adults who considered themselves religious, noting the existing cultural narrative that often pits religious and queer communities against each other. “It’s a very God vs. gay mentality in the LGBTQ community,” Gellis told Stacker. “It’s gotten better. But there’s also a valid reason for it — every horrible, heartbreaking story of a queer community member that has been thrown away or beaten up by someone in their family, it’s often rooted in religious text and religiosity.”

One of the ways JQ International engages with religious Jewish institutions—including schools, places of worship, and recovery centers—is by providing LGBTQ+ inclusion training and education to staff, parents, clergy, and educators from religious communities through workshops, speakers, and special events. From Gellis’ perspective, many Jewish religious institutions might profess to be inclusive of the queer community but lack tangible actions such as an inclusion policy statement, Safe Schools training for educators, and inclusive curriculum development.

“You’re sitting across the table from somebody who in their heart believes themselves to be an ally, but they don’t necessarily understand that holding it in your heart and being tolerant is not the same as putting your words into action,” Gellis explained.

Nathanial Green, interim co-executive director for Q Christian Fellowship, a nondenominational Christian LGBTQ+ organization, expressed the vital importance for LGBTQ+ people “who are already more vulnerable to the social and relational consequences of exclusion” to be welcomed, included, and celebrated for their identities by Christian churches and communities.

“We hope that [nonaffirming churches] will come to see [LGBTQ+ people] as equal members of the body of Christ, fully and completely affirmed, without any precondition on our sexualities or gender identities,” Green told Stacker. “And we hope that churches will not only come to that conclusion, but in the process stop repressing and suppressing our fullest expressions of ourselves, and excluding our families and us as individuals from full participation within the communities.”

Q Christian Fellowship is predominantly known for hosting an annual conference that brings together thousands of LGBTQ+ Christians from diverse theological backgrounds and traditions. Community groups are another vital part of the organization’s programming. These include affinity groups for people with chronic illnesses or disabilities, people of color, those with nonaffirming family members, or LGBTQ+ seminary students. In 2020, QCF partnered with The Trevor Project on the Good Fruit Project initiative, designed to combat attempts to put LGBTQ+ people through conversion therapy.

“There are real lives at stake, real people who just want to love and be loved and be able to express their true, most authentic selves in spiritual communities where they are not shamed and given the bait-and-switch treatment by people that should know better,” Green added. “Our mission is all about radical belonging, so my hope is that will continue to be realized.”