Is 2022 the worst year for Marvel movies ever? Here’s what the data says 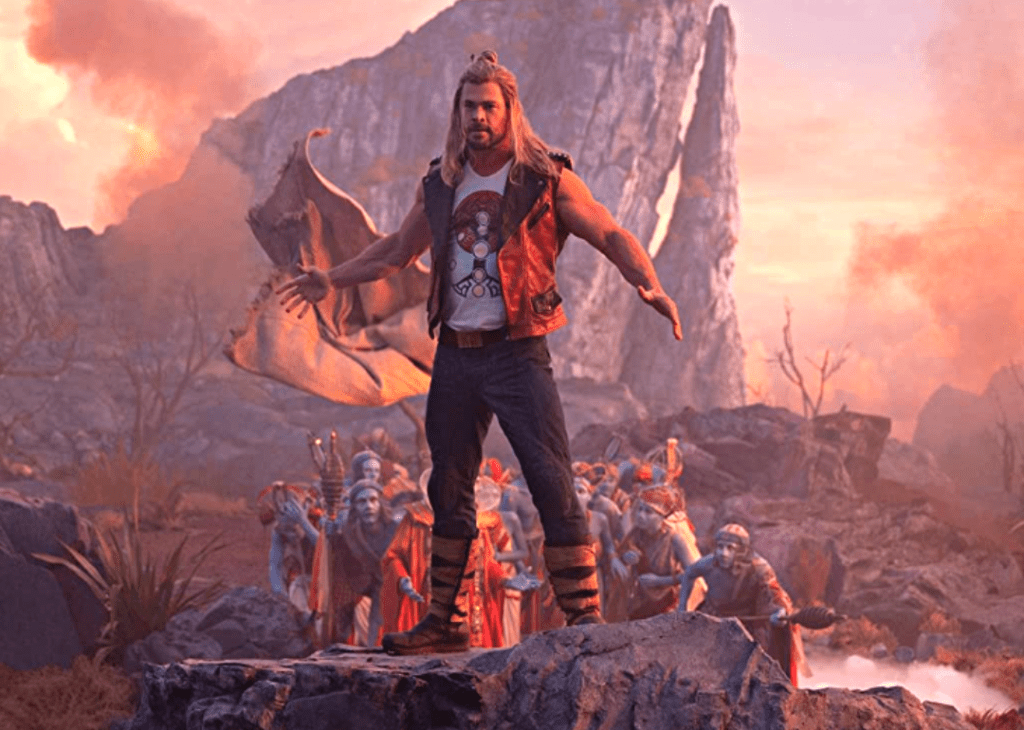 Is 2022 the worst year for Marvel movies ever? Here’s what the data says

The Marvel Cinematic Universe has been a cultural juggernaut since “Iron Man” came out in 2008. Since then, the 29 Marvel movies released in theaters have collectively grossed more than $27 billion worldwide at the box office. On top of that, the franchise has routinely put out well-received movies—MCU movies average a healthy Rotten Tomatoes critic score of 83%, per a Stacker analysis.

However, it’s not been all sunny for the MCU recently. This year, both “Doctor Strange in the Multiverse of Madness” and “Thor: Love and Thunder” received mixed reviews from critics and fans. Last year had three of the five worst-grossing MCU movies of all time—although it’s worth noting that movie revenues across the board were down in 2021 as COVID-19 continued to impact the industry.

The global box office market hit $21.3 billion in 2021, roughly half the $42.3 billion total earned in the last pre-pandemic year of 2019, according to numbers released by the Motion Picture Association.

Stacker analyzed numerous statistics behind MCU movies to better understand how rough Marvel’s current run has been, using data from Rotten Tomatoes, Metacritic, and The Numbers. Our findings lay ahead.

You may also like: 100 best fantasy movies of all time 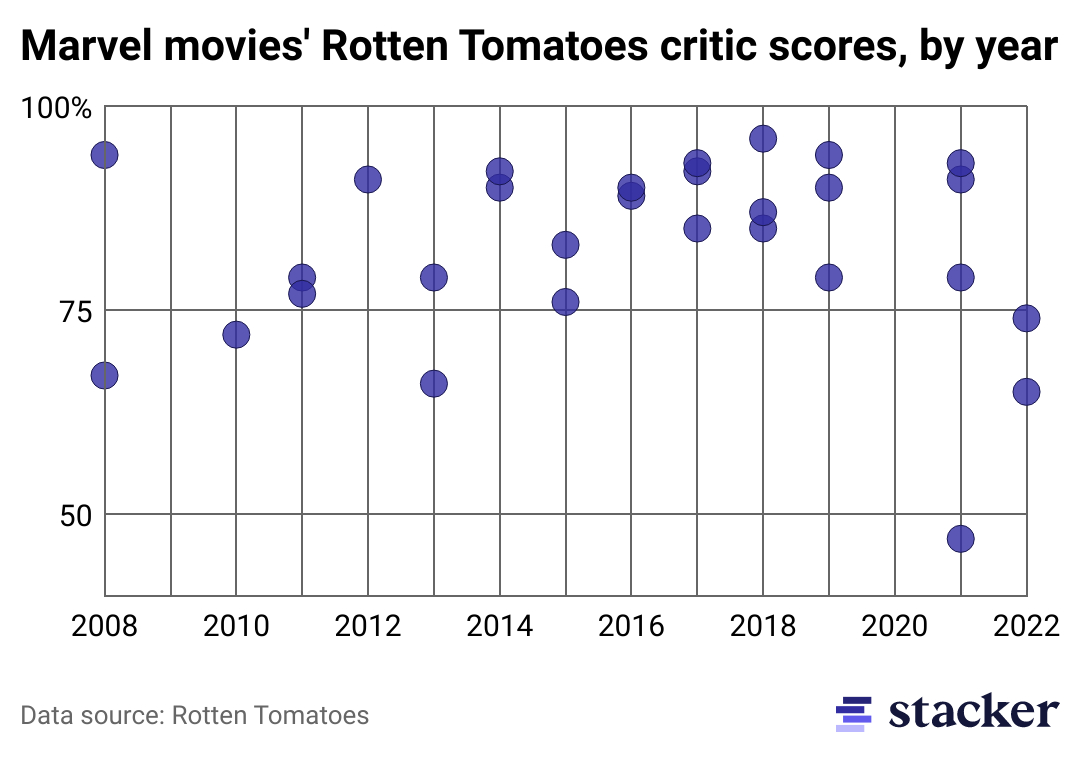 Marvel movies generally review well, with all but one receiving a “fresh” status from Rotten Tomatoes and its critical review score, known as the “Tomatometer.” The franchise also had an excellent run in recent years—from 2014 to 2019, no Marvel movie received a Tomatometer score below 75%.

However, since the start of the pandemic, troubling trends have arisen. In 2021, “Eternals” became the first Marvel movie dubbed “rotten” by Rotten Tomatoes with a 47% critical review score. This year, “Doctor Strange in the Multiverse of Madness” and “Thor: Love and Thunder” both failed to break a 75% Tomatometer score. Such a feat made 2022 the first year in the MCU’s 14-year history that two movies fell below 75% on Rotten Tomatoes.

There is still hope for Marvel to turn things around, though. “Black Panther: Wakanda Forever” releases Nov. 11, four years after 2018’s “Black Panther” earned an MCU all-time high of 96% on Rotten Tomatoes. Based on Stacker’s analysis, MCU sequels average a Tomatometer score 7 percentage points lower than their series’ preceding movie. If the upcoming Black Panther sequel equals that average, it would still score a quite solid 89%. The trailer for the sequel nabbed 172 million views in just the first 24 hours of its release, which points to a lot of continued interest in Wakanda. 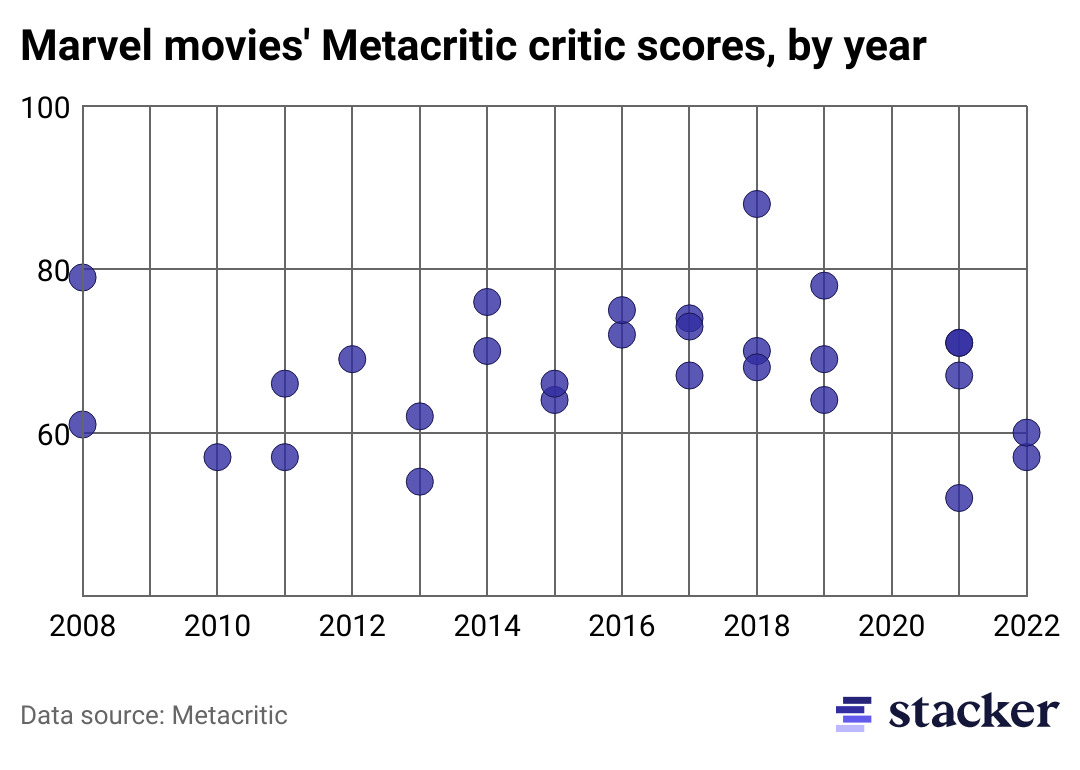 The tale of the MCU’s scores on Metacritic tells a similar story. While Rotten Tomatoes’ Tomatometer represents the percentage of positive critical reviews, Metacritic’s critic scores are calculated slightly differently. Instead, Metacritic takes a weighted average of critic reviews to calculate its critic score, called “Metascore.”

2022 marks the first year two MCU movies recorded a Metascore of 60 or below in the same calendar year—a very similar first to the 75% threshold we found for Rotten Tomatoes scores. And because there’s only “Black Panther: Wakanda Forever” left this year, it will be the first time since 2013 that the MCU has failed to chart at least two movies in a calendar year with a Metascore above 60. 2013 saw just two MCU releases overall, with “Iron Man 3” earning a Metascore of 62 and “Thor: Dark World” registering a 54. 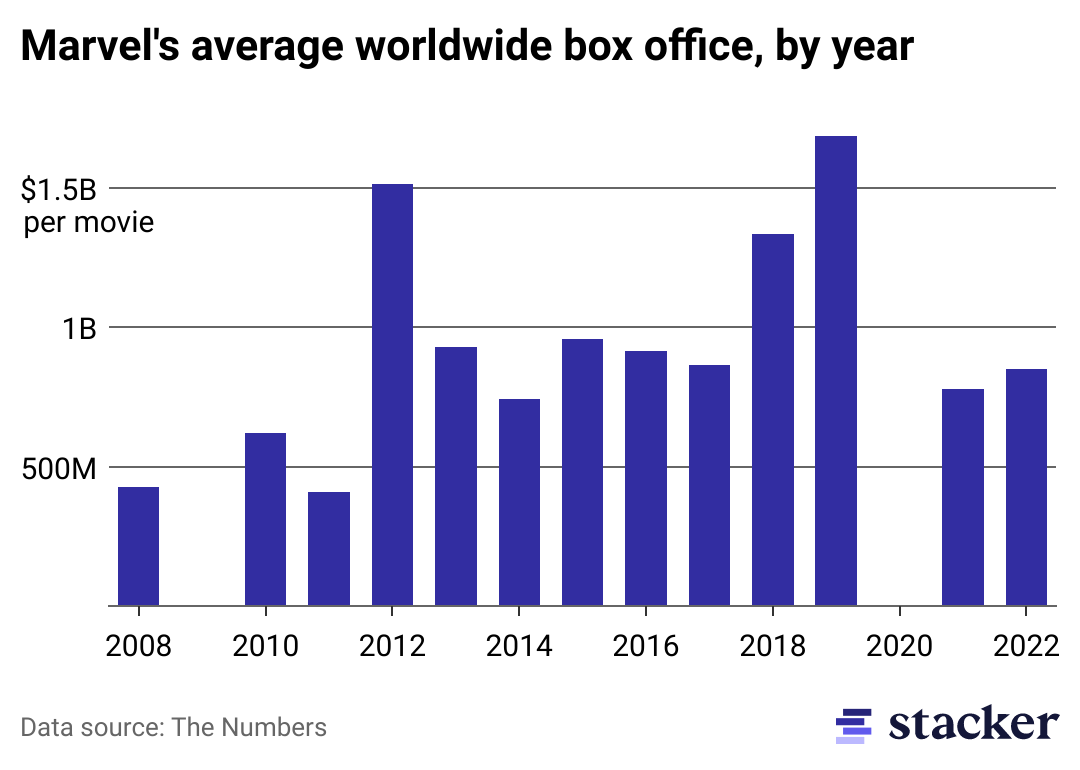 Despite the review hiccups, MCU movies have still been quite the pull at the box office. 2021 and 2022 have averaged similar totals to years when no Avengers movie—Marvel’s tentpole series around which other movies are built—has been released. Avengers movies came out in 2012, 2015, 2018, and 2019. All those years, except 2015, saw sharp increases in the MCU’s worldwide box office averages.

2021, as mentioned earlier, did have some low earners in “Shang-Chi and the Legend of the Ten Rings,” “Eternals,” and “Black Widow.” However, the third MCU Spider-Man flick, “Spider-Man: No Way Home,” largely saved the year with its $1.9 billion worldwide total.

This year the MCU seems to be back up to its old tricks. The second Doctor Strange movie racked up $952 billion globally, and “Thor: Love and Thunder” nearly hit $750 million worldwide. Per The Numbers, “Doctor Strange and the Multiverse of Madness” is the second highest-grossing movie this year behind “Top Gun: Maverick,” while “Thor: Love and Thunder” is ranked sixth. The box office of those two films equals a combined average of $850 million, just below the MCU’s $866 million average in 2017 and above the $750 million the franchise averaged in 2021.

So while the quality of Marvel’s movie output may be below par as of late, there hasn’t been a drop in earnings potential. The franchise is still raking in dollars rapidly with a reasonably solid post-2020 recovery. Whether or not review scores bounce back remains to be seen—we may get our first inkling, though, when “Black Panther: Wakanda Forever” arrives in theaters next month.