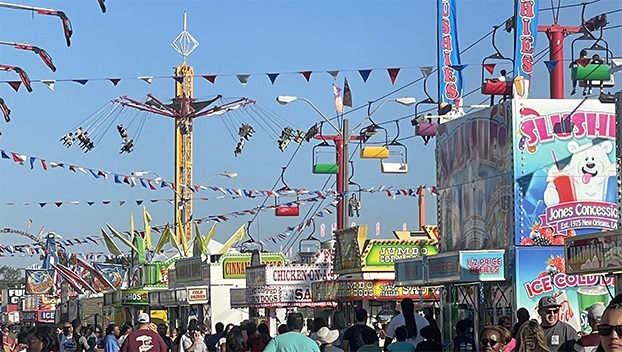 More than half a million people attended this year’s Mississippi State Fair.

“Given that this year’s Fair was a shorter 11-day event, we nearly reached pre-pandemic attendance levels,” Gipson said. “During the Fair, our new Fairgrounds water well pumped 1.3 million gallons of fresh well water that was used for everything from making lemonade and sweet tea, to washing cattle, sheep pigs and goats.”

Gipson said the fair is one of the state’s largest agricultural events, and also a huge economic driver for Mississippi and the metro area.

“A recent study concluded the economic impact of the Fair is nearly $50 million annually,” Gispon said.  “Given that this year’s Fair was a shorter 11-day event, we nearly reached pre-pandemic attendance levels.”

The Mississippi State Fair kicked off on a Thursday instead of the usual Wednesday evening.

The fair instituted new safety measures, that Gipson said were successful. The added security included metal detectors and a requirement that fairgoers under age 18 be accompanied by an adult after 9 p.m. There was also a large police presence at the fairgrounds that included officers from the Jackson, Pearl and State Capitol police departments, along with the Hinds County Sheriff’s Office and the Department of Homeland Security, among others.

“These additional law enforcement resources served as a major deterrent to would-be criminals. And, when problems arose, the issues were dealt with immediately,” Gipson said. “I’m very pleased to say we accomplished our Goal for 2022: We recreated an experience of peaceful family-friendly, fun and security at the Mississippi State Fair.”