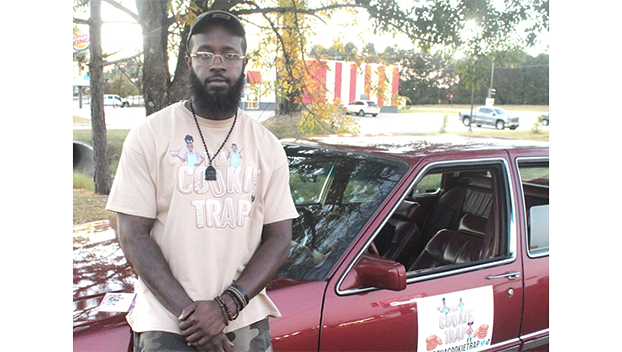 PHOTO BY HUNTER CLOUD Joe “Tha Cookie Man” Campbell sells cookies out of his maroon Cadillac on Brookway Boulevard, close to where The Dart Landed. He nearly died from an illness six years ago and has overcome a lot to get to this point.

Joe Campbell sat in his maroon Cadillac in front of Fast Paced Health on Brookway Boulevard, close to where The Dart landed Thursday afternoon. He is known as the “Tha Cookie Man” written on the back of his Tha Cookie Trap shirt.

Tha Cookie Trap is a company he started two years ago to create generational wealth for his kids. A storefront and creating a household name is his goal. Right now, he is hustling the baked goods on the weekends.

The maroon Cadillac is an asset to the business with its white-walled tires and logo on the driver-side door. He said he saved up for the car and liked the old-school look.

“If you see it stop because he has the best cookies,” he said. “Anywhere I go, I am known as Tha Cookie Man. I get a thrill out of the kids riding by on the school bus or with their parents screaming about the cookies.”

Campbell is a native of Brookhaven and went to Brookhaven High School. He chose to go the trade route working as a welder and in warehouses. Six years ago, his world came crashing down with the diagnosis of spinal meningitis, an infection of fluids around the brain and spinal cord.

“It almost killed me. I was in the hospital for two months and on life support for two weeks. I went through surgeries and home rest for three years. I was denied disability,” Campbell said. “It got overwhelming, so I asked God to put me in a position and to help me out. I wanted to move forward for my kids. It is what he did, and that is what he did. During that time, I just kept pushing forward and putting God first. You think about everything you have instead of thinking about what went wrong.”

His mother-in-law wanted to start a bakery, so she had all the tools and equipment he needed for the business. She taught him how to bake the cookies, and he added his twist with the branding.

They are now going on year two of the business, which he hopes starts with humble beginnings in a car and expanding to franchises. Tha Cookie Trap’s logo includes his son Josiah and daughters Jordan and Haylee.

His wife handles the graphic design. It is a family business, with everyone working together to expand the business. Ultimately, he said his goal is to pass on a legacy.

Additionally, he hopes his story inspires people. They do not have to be a doctor or a lawyer to be successful, he said. People can tap into the good and use what they have to build a future.

His near-death experience had an impact on his outlook on life. It also forced him to reinvent himself.

“Life is precious and worth living. The biggest thing is having faith. God is real,” he said. “I had to reinvent myself after the illness. My business has faced some trials too. In my free time, I come up with different ideas and try to expand the business. I am always thinking of new ideas. I have a goal set, and until it is reached I have a lot of work to do. I have to go and reach it.”