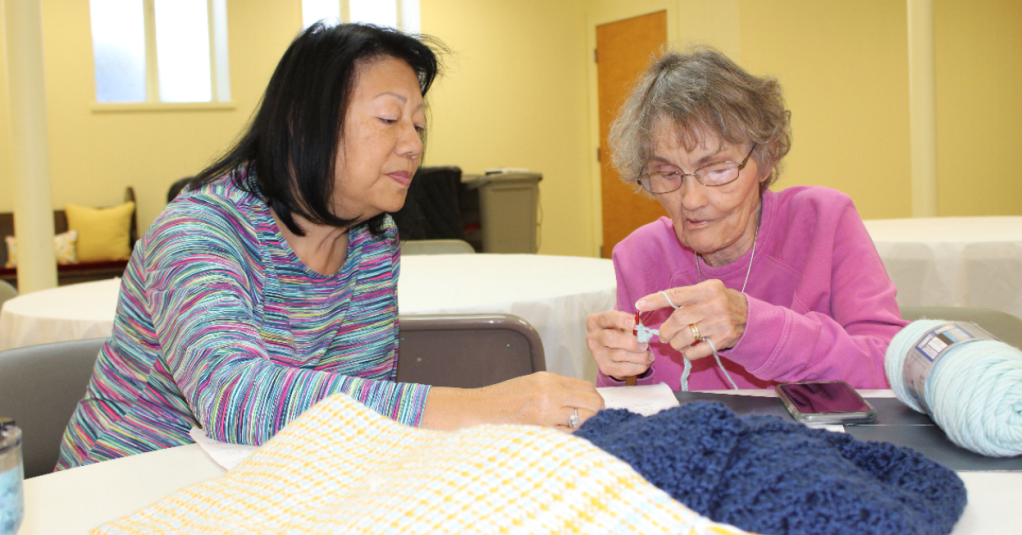 Joy Wing, left, watches as Lois Robey works a stitch as she begins work on a new prayer shawl during a meeting of Nan's Needles at Crawford Street United Methodist Church. The group knits prayer shawls that are given away to people in need. (John Surrat | The Vicksburg Post)

One Saturday a month, a small group of women meets in the Floral Room at Crawford Street United Methodist Church in Vicksburg to give others a sense of comfort and love.

Nan’s Needles, a knitting group formed in 2019, makes prayer shawls — knitted or crochet shawls someone can wear to have a personal space when they pray.

“We’ve given them to all sorts of different people in the community,” founder Brooke Weaver said. “We’ve given some to the cancer center, friends and family who have had a birth, marriage or death in the family.

“We’ve given some to college students when they start college; basically anyone who is in need of a little extra love and peace and caring, and as a reminder that there are people who are there (for them) and the shawls can give them a lovely hug,” she added. “Anybody you think might need a hug — a congratulatory hug or a comforting hug — those are the people we give them to.”

In the three years since Nan’s Needles was formed, Weaver said the group has made and given away 189 shawls.

“I was shocked that we had given that many,” she said, adding the group has already made and given 45 shawls so far this year. At that rate, she said, she anticipates the group will have made and given more than 200 by the end of the year.

“What we do is wrap each shawl with a card with a message and the name of the person who made the shawl,” she said.

Weaver said she started the group as a way to preserve her grandmother Nancy’s memory and as a way to give back.

“I was very close to my grandmother growing up and my middle name is Nan after her. She was called ‘Nan,’” she said. “She would come to the house with my daycare and she was a member of the prayer shawl ministry at her church.”

When her grandmother died, Weaver said, “I was struggling and trying to find a good way to preserve her memory. I did a lot of thinking and praying about it and we were members of Crawford Street for about a year at that point.

“I’m an avid knitter and I wanted a way to give back to the community the talents that I had. I shared that with the congregation.”

Since its start, Nan’s Needles has seen many people join and leave.

“We’ve had some people come and go and we’ve had some friends that we’ve taught (to knit) who thought it was fun but later decided it wasn’t for them,” she said. “We’ve been able to impact not only the congregation at Crawford Street but others in the community as well.

Other members had been knitting for some time when they joined Nan’s Needles.

“I taught myself to knit in college but hadn’t knitted for years so I’m having to relearn,” said Joy Wing. “It’s all coming back to me.”

Rebecca Hunt said she started knitting about seven years ago, “but I haven’t knit nearly as much as I have in the past year. I like to play with yarn and I’m fulfilling a need.”

Weaver said the group meets the second Saturday of the month unless a holiday intervenes. She said Saturday was selected for the group because she works full-time.

Weaver said the group has been well received by the congregation of Crawford Street, which has donated yarn and money to purchase yarn and pay the postage to send shawls to people living outside Warren County.

And she’s hoping more people will join the group.

“We encourage everyone and anyone to join us; we’ll gladly teach people how to knit or crochet and share that with them.”