How exchange rates have changed in the past year 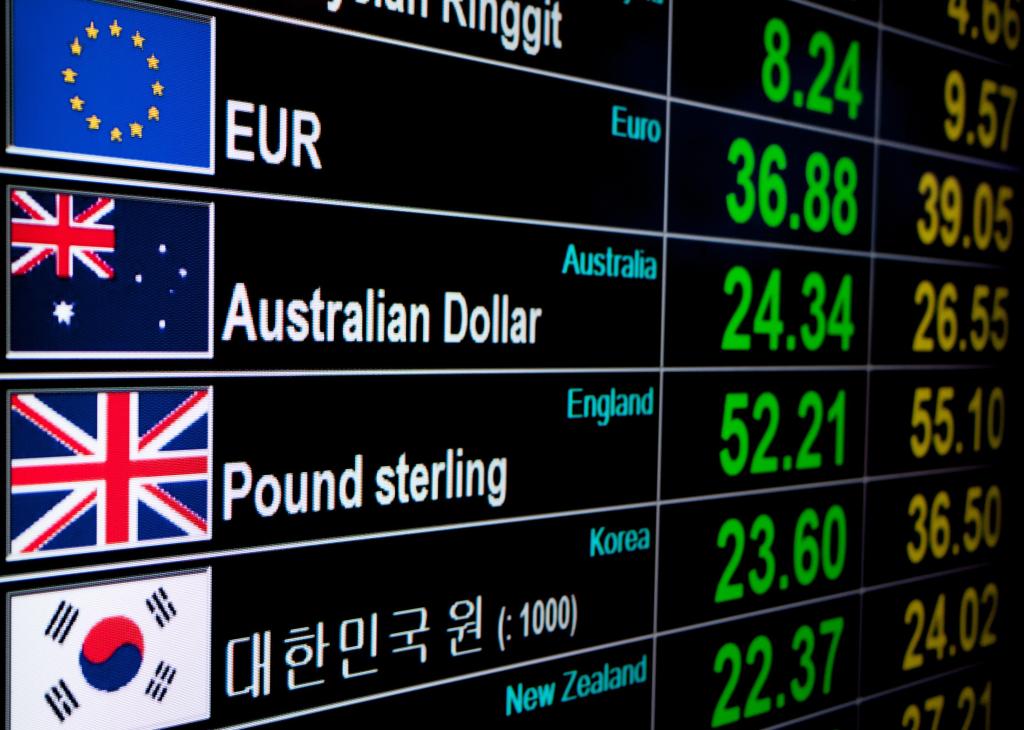 How exchange rates have changed in the past year

In recent months the U.S. Federal Reserve has increased interest rates to combat inflation. The increase has strengthened the dollar, impacted global interest rates, and pressured central banks in other countries to raise their interest rates—most notably Great Britain.

Exchange rates have mainly increased from the year before, except in Mexico, Australia, and some European countries. Many currencies worldwide are weakening due to the dollar being considered a safe haven by investors facing volatile economic times. The U.S.-China trade war, Russia’s invasion of Ukraine, and the resulting U.S. and allied governments’ sanctions, COVID-19 restrictions, oil price fluctuations, and food commodity spikes have all impacted the value of global currencies. Currencies pegged to other currencies—such as those pegged at a fixed rate to the euro—have gone down in value.

Keep reading to learn more about how exchange rates have changed in the past year. 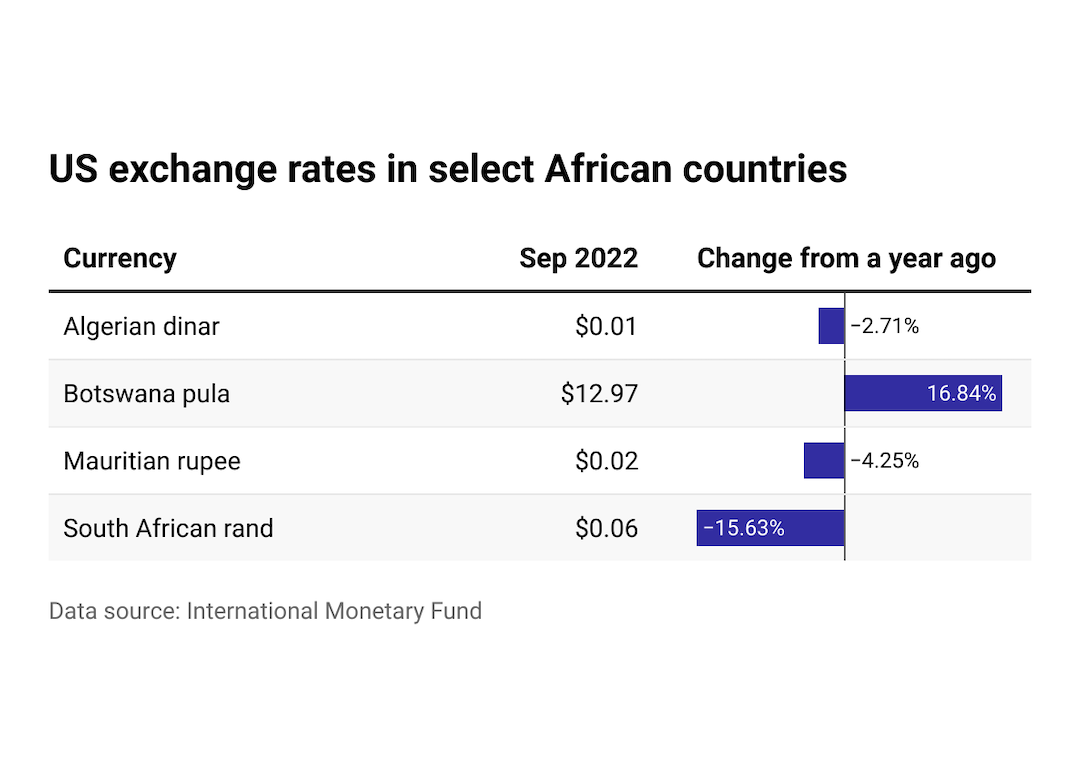 Due to half of international trade being invoiced in U.S. dollars, a stronger dollar hurts consumers worldwide who pay for imports using dollars, including importers in Africa. This rise in the dollar is due to the Fed’s aggressive hikes in interest rates and investors seeing the dollar as a safe haven asset. Additionally, the currencies of 14 African countries are pegged at a fixed rate to the euro, so their currencies are directly affected by euro depreciation.

The Botswana pula has gone down because the country is aiming to increase its export competitiveness. The pandemic has reduced the South Africa-bordering country’s diamond exports—an essential part of its economy—to such an extent that its president called on Botswana leaders to diversify commodity exports.

In September, the South African rand weakened as the value of the U.S. dollar stayed high due to expectations that the Fed would continue hiking interest rates. The South African currency dropped significantly earlier this year due to catastrophic floods. Additionally, South Africa has faced uncertainty over the country’s general elections, continued concerns regarding the funding needs of state-owned enterprises, and global factors, such as stagnant gold prices. South Africa is the 10th largest gold exporter in the world. As a member of the BRICS coalition (which stands for Brazil, Russia, India, China, and South Africa), South Africa has sought to reduce the dollar’s share in its trade with China and other countries.

The COVID-19 pandemic potentially resurging in South African cities also hurts the rand’s prospects as wide-scale disruptions could stall economic recovery and growth, as does the Fed’s hawkish policy shifting investment inflows from commodities, including gold, to Treasuries. In response to the raising of interest rates by the U.S. Federal Reserve, South Africa lifted interest rates to 6.25% in September. 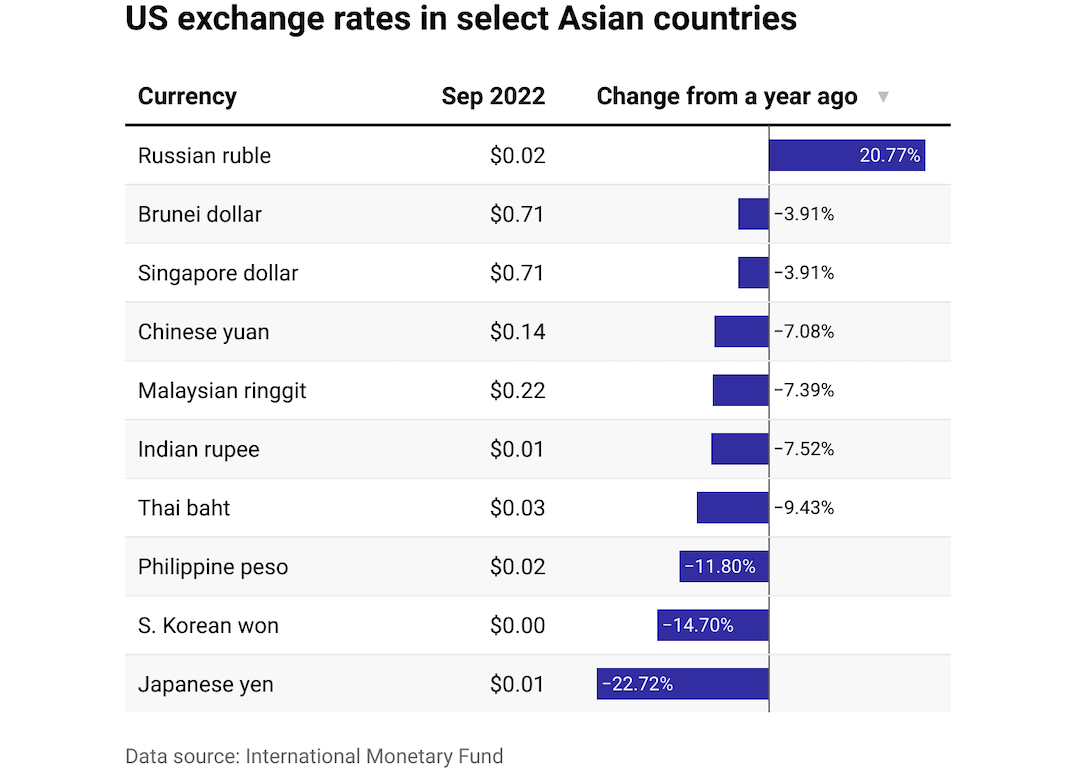 The Fed raising interest rates also impacted Asian countries, causing the U.S. dollar to rise higher than their currencies. The Singapore dollar, however, has not been hit nearly as hard by this change, according to economists, due to their central bank making a pre-emptive policy move to help Singapore keep up with inflationary pressure.

In February 2022, the value of the Russian ruble went down significantly, by almost 30%, amid tough U.S., U.K., and EU sanctions put into place after Russia’s invasion of Ukraine. However, Russia has defended the ruble with some success since then, as sanctions have not seriously hurt Russian natural gas and oil exports. Russia also bolstered the ruble by demanding more gas payments from its trade partners.

Due to China’s costly Covid-Zero strategy of rolling lockdowns and the Fed’s intense interest rate hikes to battle inflation, the Chinese yuan has gone down in value. The Japanese yen has also plunged to a value lower than it has been in 24 years compared to the dollar due to central banks raising interest rates in response to increasing inflation attributed to the Russia-Ukraine War, including the U.S. Fed and the Bank of Japan.

In Southeast Asia, the Thai bhat, Malaysian ringgit, and Philippine peso have also not been immune to the repercussions from rising interest rates within the U.S., and have also seen a fall in value. 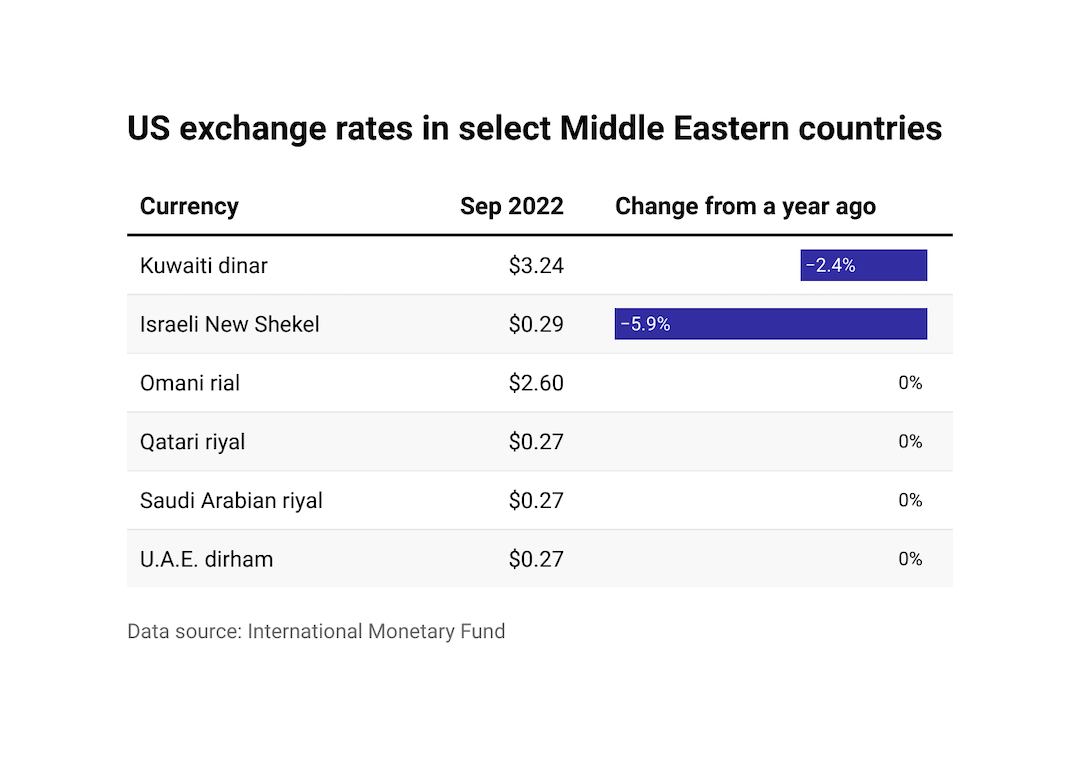 Countries across the Middle East have also been impacted by the Fed raising its interest rates significantly, making the depreciation of their currencies more extreme and worsening inflation issues.

However, some of the oil and gas-exporting Gulf countries’ central banks have raised their interest rates, too, including those in the United Arab Emirates, Saudi Arabia, Qatar, and Kuwait.

One of the reasons the Israeli new shekel has become weaker against the U.S. dollar is the U.S. stock markets’ decline, which causes an issue for Israeli financial institutions that have invested in these markets as their dollar exposure falls. This situation compels these institutions to sell shekels and buy dollars on the foreign exchange market to maintain their pre-determined exposure levels.

Because the Omani rial, Qatari riyal, Saudi Arabian riyal, and UAE dirham are all pegged to the U.S. dollar, their currency exchange rates have not changed. Countries in the Middle East do this for stability, as these oil-rich nations need the U.S. and China to remain significant trading partners.

In reaction to the Fed raising rates, the UAE and Saudi Arabia have raised interest rates. 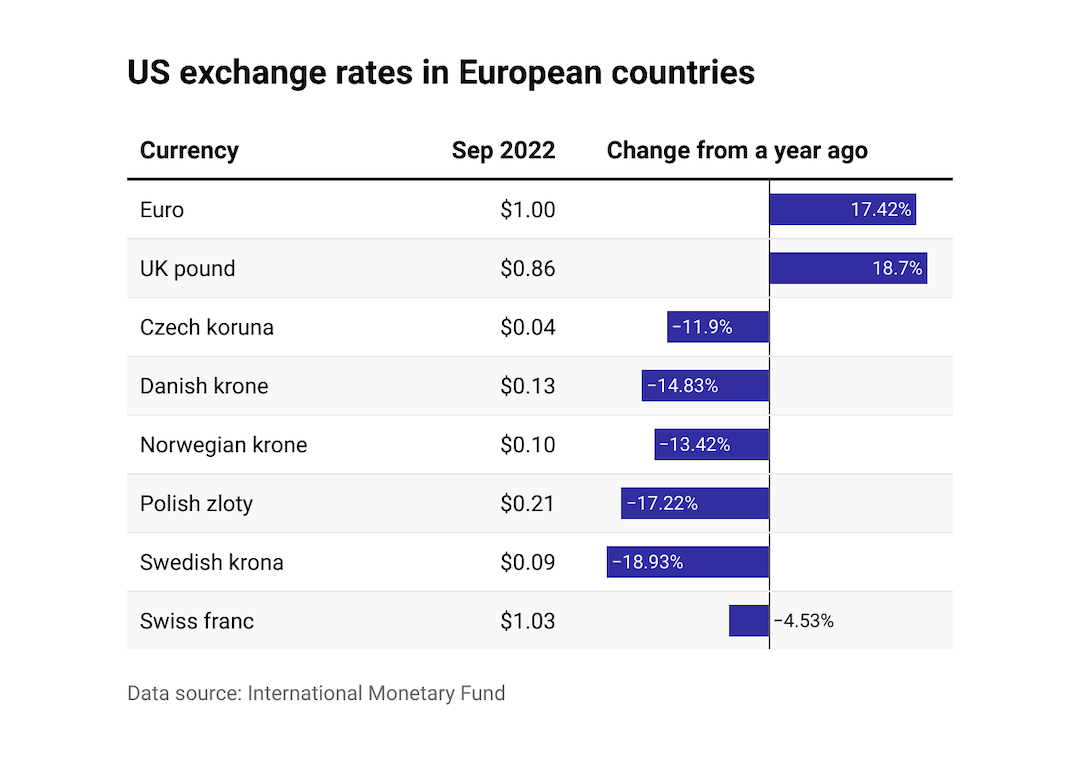 For months, the U.S. exchange rate with the 19-nation eurozone has been falling—to the point where, when it hit U.S. dollar parity, the common European currency was the weakest since its debut over 20 years ago. The reasons for this drop include European—mainly German—energy dependence on Russian pipeline gas. There are growing fears in Europe of a severe recession worsened by energy shortages, causing factory shutdowns and employee furloughs for EU industries this winter. The Danish krone pegged to the euro through a fixed exchange rate is why its change in value is the same.

The value of the British pound has plunged so dramatically that it was, on Sept. 7, 2022, the weakest it had been, adjusted for inflation compared to the dollar since 1985. This drop in value is due to a looming global recession, combined with surging British and EU inflation. There are also concerns that public stimulus spending and tax cuts proposed by Prime Minister Liz Truss’ new government could exacerbate inflation pressures.

The dollar is stronger than the Norwegian krone, likely due to the Eurozone economy weakening, oil price fluctuations—Norway is a major oil and gas exporter—and changes, respectively, in the countries’ interest rates.

The Swedish krona and the Swiss franc also fall behind the dollar because of the Fed aggressively raising rates. Investors have traditionally viewed the Swiss franc as a safe haven due to two centuries of Swiss neutrality and, until recent years, strict banking secrecy laws. But even as one of the wealthiest countries in the world, Switzerland is not immune from European gas shortages and is being forced to conserve energy this winter.

In reaction to the U.S. Federal Reserve raising rates, the Bank of England increased interest rates by half a point. The European Central Bank will likely continue to raise rates. Norway and Switzerland have also raised rates, as has Sweden’s central bank. 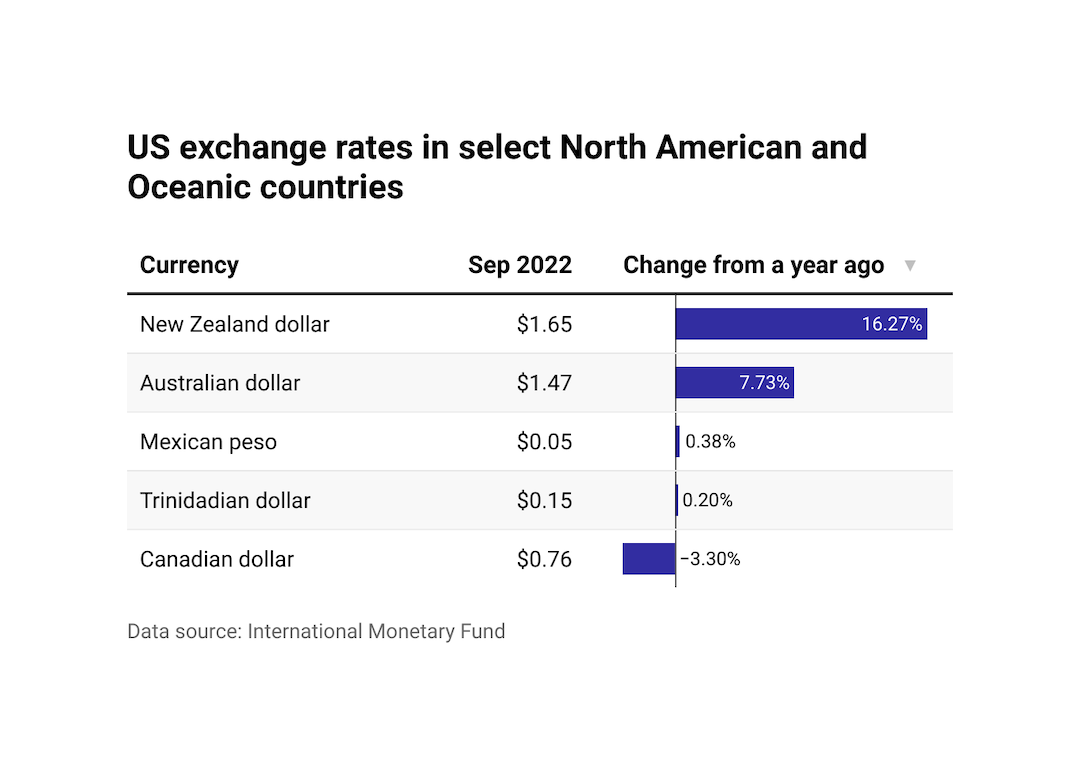 The value of the Canadian dollar has gone down dramatically. On Sept. 16, 2022, it fell to the lowest level in nearly two years. Data from the U.S. demonstrated its core inflation rate continues to go up. And while economic data from another nation isn’t usually enough to tank a country’s currency, the seriousness of the inflation problem has impacted the Canadian dollar.

Additionally, the Canadian dollar is showing relative weakness because of an overheated housing market in Canada’s leading cities, such as Toronto and Vancouver, along with weakening oil prices.

An emerging market economy that has heavily borrowed in dollars often experiences its currency going down dramatically in value when the dollar appreciates, which is why the value of the Mexican peso has dropped. Mexico experienced a peso crisis parallel with a higher interest rate Fed policy bolstering the U.S. dollar in the early ’80s and again in the mid-’90s.

New Zealand and Canada have been raising interest rates aggressively in recent weeks to stem inflation, including in their highly priced housing sectors. Australia has also been regularly raising rates. 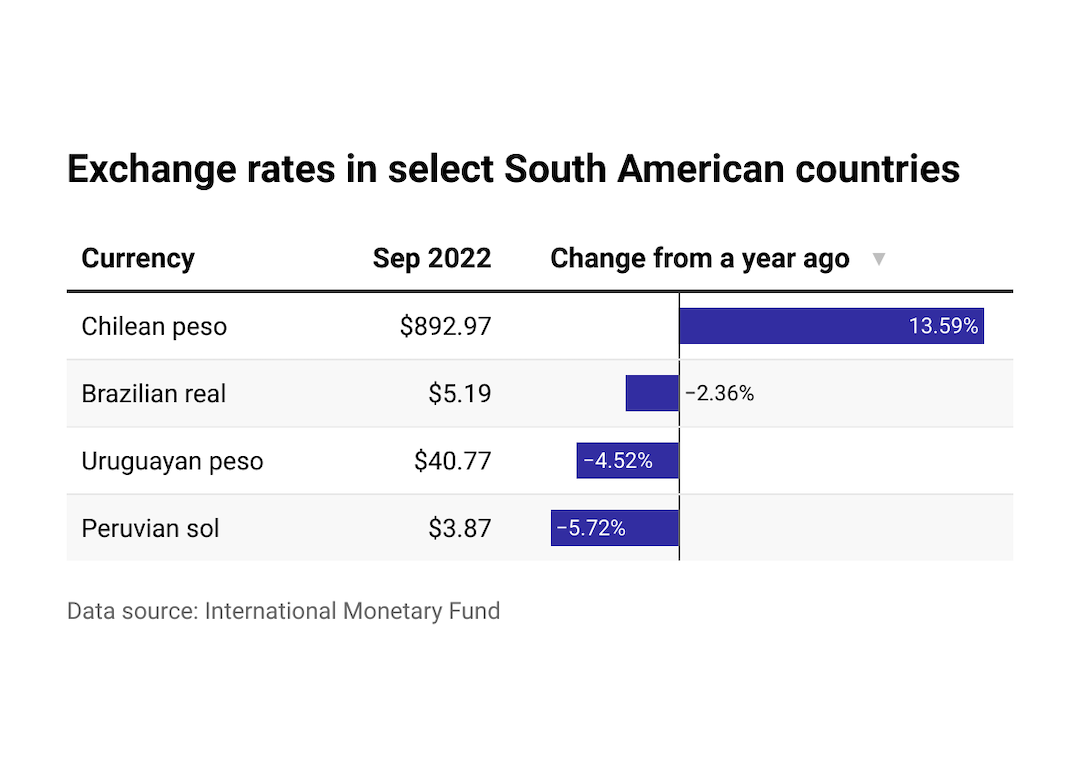 Though it was slightly up at the beginning of September, the Chilean peso’s value has decreased for many reasons. Chile is the world’s leading copper exporter, a highly volatile commodity associated with industrial and housing construction demand for metal worldwide. Chileans have recently experienced political instability, with voters rejecting a new constitution in early September. That followed the government agreeing in August to a credit line deal with the International Monetary Fund.

The Brazilian real appreciated significantly in 2022 because of increased interest rate differentials with developed markets and other emerging economies, rebalancing investments, and rising commodity prices. The commodities that rose in price were oil, agricultural products such as coffee, and industrial metals.

When these commodities have increased in price in the past, they have usually benefited net commodity exporters like Brazil. But a highly inflationary global environment paired with higher dollar borrowing costs can create a whipsaw effect even for commodity-rich exporters.

This story originally appeared on MoneyTransfers.com and was produced and
distributed in partnership with Stacker Studio.