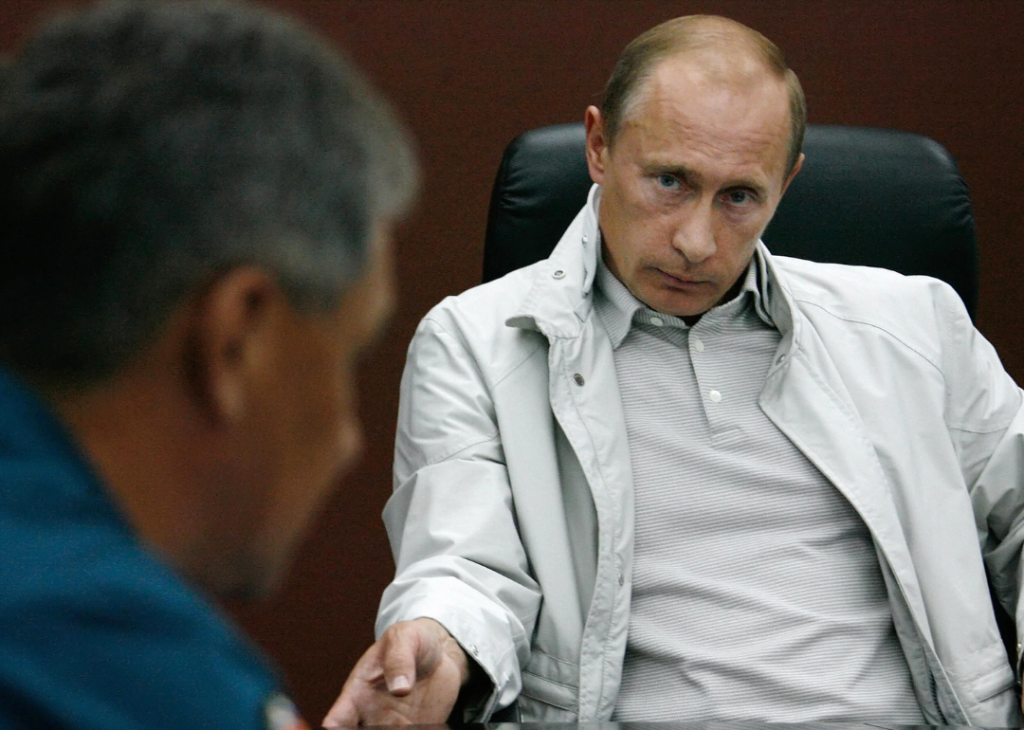 Vladimir Putin’s rise from a relatively unknown KGB agent to a two-decade Russian president—and some would say, dictator—is riddled with corrupt politicians, cronyism, oligarchs, and lingering questions about the inner workings of power.

Putin was abruptly appointed prime minister by Boris Yeltsin, Russia’s first elected president who, by 1999, was a disgraced leader who had barely survived impeachment charges for treason and genocide. In exchange, Putin immediately granted Yeltsin immunity from criminal charges and investigations.

When Putin became prime minister, a devastating conflict between Russia and Chechnya had been ongoing for much of the decade, initiated by Yeltsin and unpopular with the Russian public. The First Chechen War left much of Chechnya in economic and political chaos in the late ’90s. Russia’s eventual defeat created a political climate amongst politicians and the public that yearned for redemption and strong leadership. Putin’s appointment to the prime minister and the acting president within the same year allowed him to become what many Russians at the time wanted: a “man of action.”

Over the years, Putin has held onto power through election fraud, intimidation of opponents, military threats, control over oligarchs, and law changes around term limits. His time in office has been characterized by conflict with former USSR territories and the suppression of independent media, making public scrutiny of him or Russia’s military operations both difficult and dangerous.

To understand Putin’s decades in power, Stacker investigated the conflicts and wars during his leadership of Russia, when they occurred, and their human cost, using various news and historical sources. 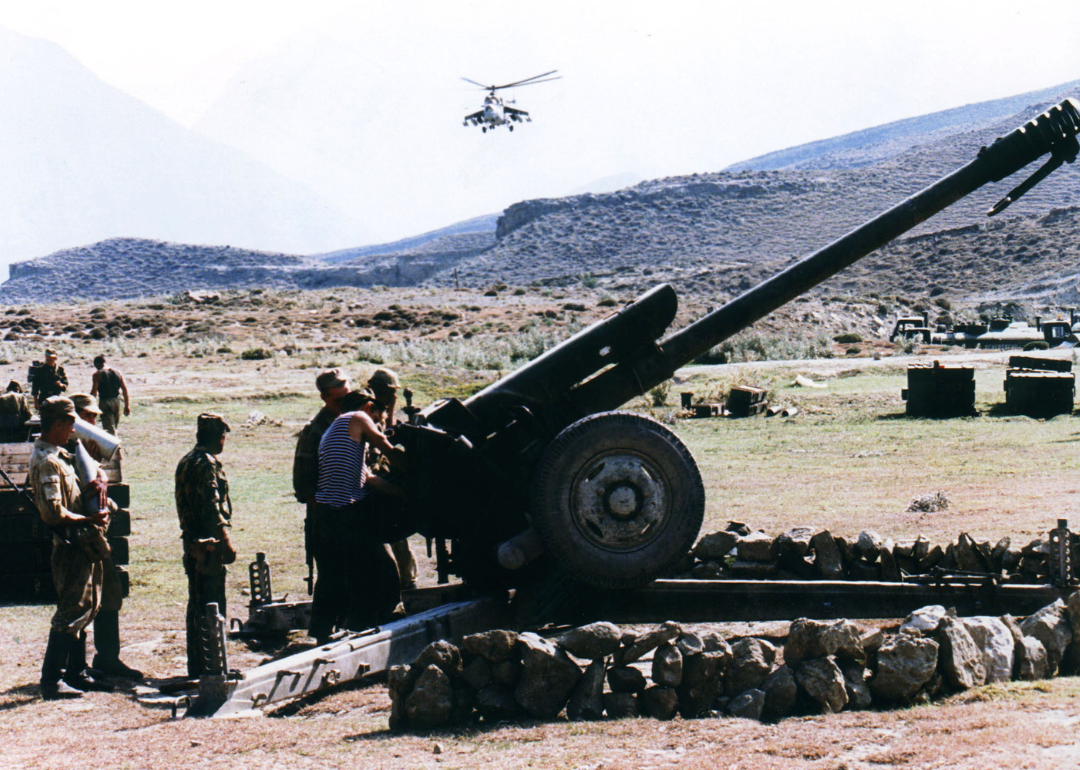 The conflict between Russia and its contested republic Chechnya had already been raging for several years when Yeltsin began to transfer power to Putin. The First Chechen War, which lasted from 1994 to 1996, was a struggle for independence from Russian rule, fought by the majority-Muslim republic; however, the peace treaty that ended the First Chechen War did not settle the sovereignty dispute for long.

In 1999, shortly before Putin was appointed Russian prime minister, Chechen pro-independence fighters moved into Dagestan, another Russian republic, and declared sovereignty there. Russia retaliated, sending troops to Chechnya. The newly appointed Putin ordered Russian forces to level the Chechen capital of Grozny, and by early 2000 the city was reduced to rubble.

Thousands were reported killed during the siege and bombings, and accusations of Russian troops massacring civilians added to the stark fatality count. The United Nations called it “the most destroyed city on Earth.”

While conflict had already been fomenting in the region, speculation over the nature of Putin’s sudden rise to power has endured in the decades since he became prime minister and president. A month after Putin became prime minister, several bombings in different parts of Russia leveled multiple apartment buildings, killing hundreds of civilians. Putin declared that Chechen terrorists were to blame for the bombings and used the events to justify launching a large-scale invasion of Chechnya—an event that would kick off the Second Chechen War.

Little evidence emerged to back up Putin’s version of events, leading some to doubt the “official” version as presented by Putin and his government. 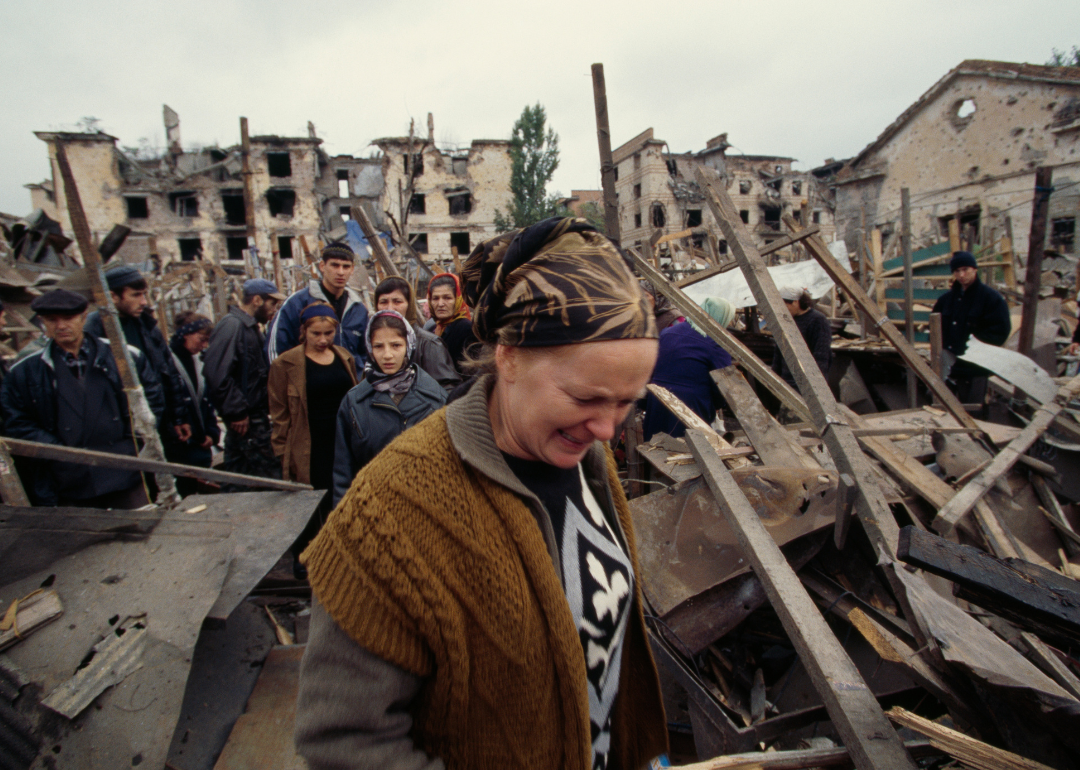 Events in Dagestan and Grozny set off the decade-long Second Chechen War, a conflict that would define Putin’s early political reign and work to consolidate his power. By the early 2000s, he had already limited the scope of the free press. State media and Russian officials described the war as a “counter-terrorism operation,” while Russian troops prevented independent media from covering the conflict on the front lines and provided inaccurate casualty and fatality counts.

Censorship and incomplete record-keeping make establishing the total human toll of the Second Chechen War nearly impossible, with estimates varying widely. Roughly halfway through the war, Kremlin allies released reports that placed the death toll at around 160,000 military and civilian deaths from both Chechen wars, though actual counts are likely much higher.

Early in the Second Chechen War, Putin established a pro-Russia government in Chechnya led by strongman Akhmad Kadyrov. When Kadyrov was assassinated in 2004, his son Ramzan Kadyrov took his place, and he remains the current leader of Chechnya and a close ally of Putin. 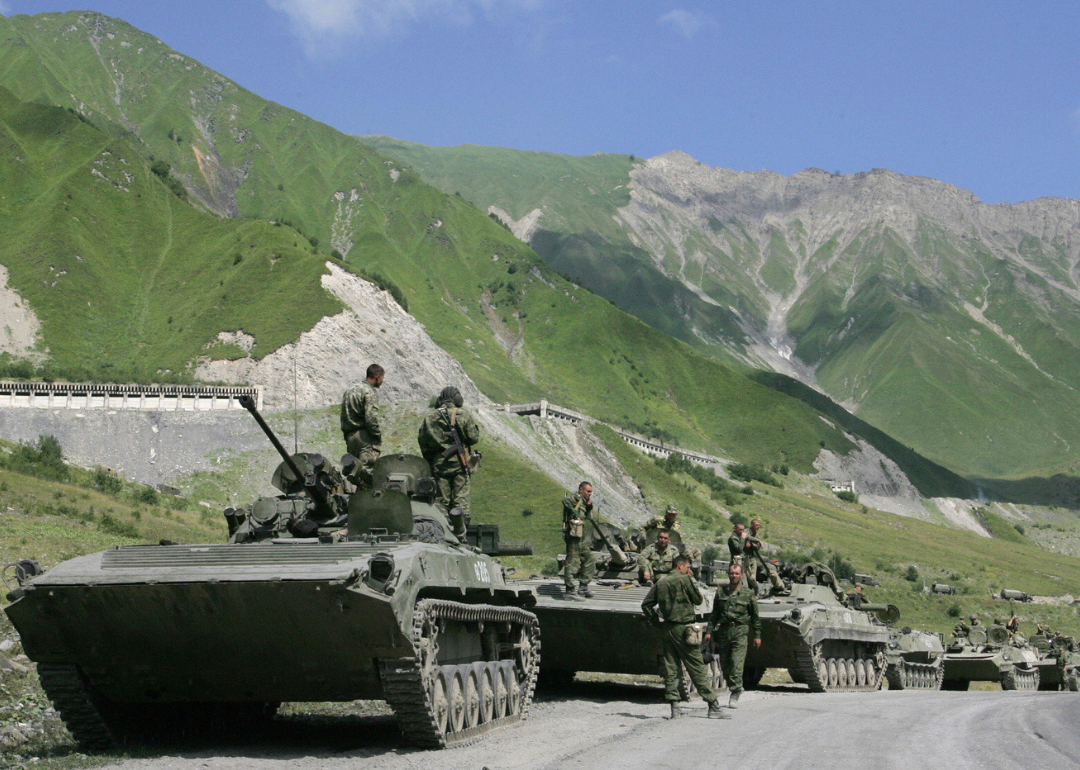 Tensions between Russia and Georgia, a former Russian republic that declared independence from the USSR in 1991, came to a head in August 2008 over two disputed Georgian territories, South Ossetia and Abkhazia. Russia fabricated claims of a genocide carried out by Georgians in South Ossetia. In the two territories, Russian troops joined forces with Russian-backed separatists, and they invaded a militarily unprepared Georgia. Russia succeeded in taking control of the territories.

The war only lasted five days, but the aftereffects of the conflict were far-reaching. The European Court of Human Rights found Russia guilty of human rights violations against Georgian civilians. Over 200,000 people were displaced by the war, according to an Amnesty International report. An EU Council official report placed the death toll at around 850, with thousands more wounded.

In addition to the frontline impacts of the Russo-Georgian War, the international response—or lack thereof—would have enduring effects on Putin’s future foreign relations strategy. After Russia invaded Georgia, Europe and the U.S. showed the Kremlin leniency, resulting in an overall lack of international consequences for Russian aggression. This response set a precedent for Putin’s future invasions. 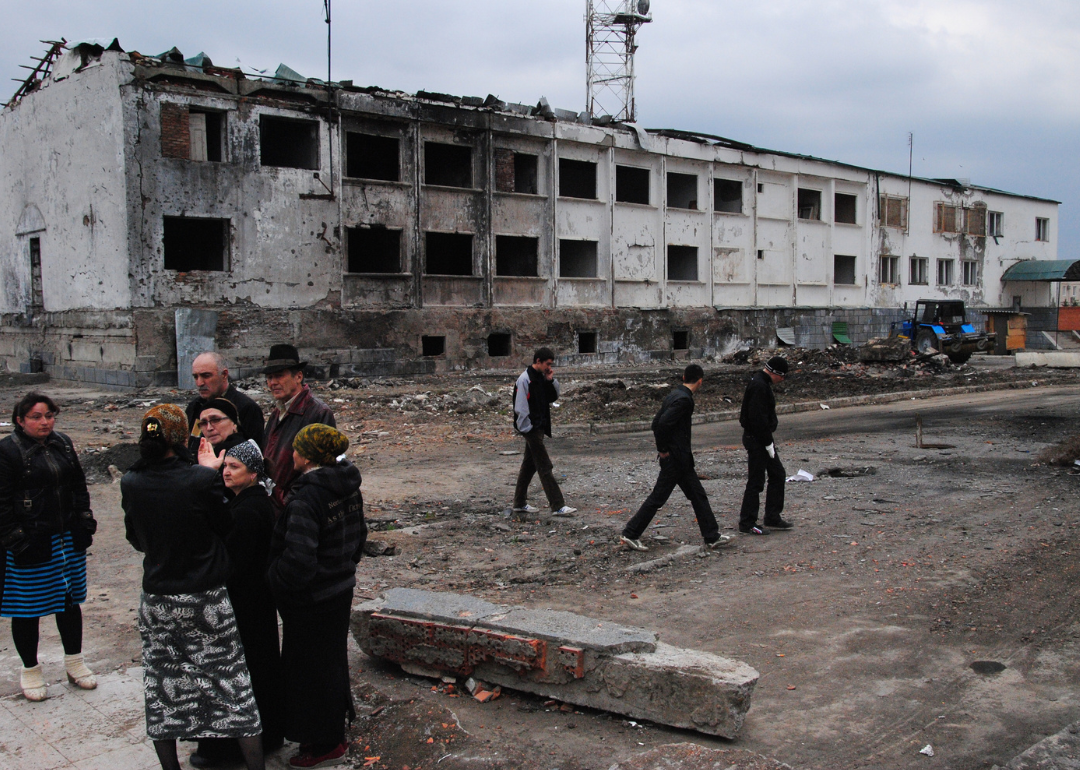 The end of the Second Chechen War in 2009 did not end the conflict between Chechnya and Russia, despite the installment of a pro-Russia government. A Chechen independence movement continued alongside the fundamentalist Sunni nationalist organization, the Caucasus Emirate. The group, which developed ties to the Islamic State group and al-Qaida, aimed to drive out Russian influence in the North Caucasus and to establish Sharia law in the region.

Between 2009 and 2014, the conflict was defined by instability in the North Caucasus and high-profile terror attacks on Russian civilians, which killed hundreds. Some attacks drew particular attention internationally since they occurred shortly before the 2014 Sochi Olympics. Russia redeployed troops to the region, and almost 500 people were killed in the conflict alone in the summer of 2009.

Fighting in Chechnya at the end of the Second Chechen War spilled over into neighboring Ingushetia, another North Caucasus republic. What people have described as a civil war in the region began in earnest in 2007, when Russian separatists in Ingushetia and Russian troops clashed with militants.

News outlets widely reported violence against civilians by militants and Russian special services, but by 2014, reports of deaths and casualties had begun to die down. In 2015, the leader of Ingushetia declared that it had neutralized the “insurgency” in the region.

The death toll in the North Caucasus also began to decline in the second half of the conflict, but many Chechen and North Caucasian militants joined allied forces in Syria. Meanwhile, Putin sent Russian troops and aid to Syria to support Syrian President Bashar Assad.

In 2016, the United Nations accused Russia of committing multiple war crimes in Syria, including bombing 275,000 civilians in Aleppo and destroying bomb shelters, homes, and water supplies. Although Russia officially declared victory over militants in 2017 in the North Caucasus, reports of conflict in the region continued. 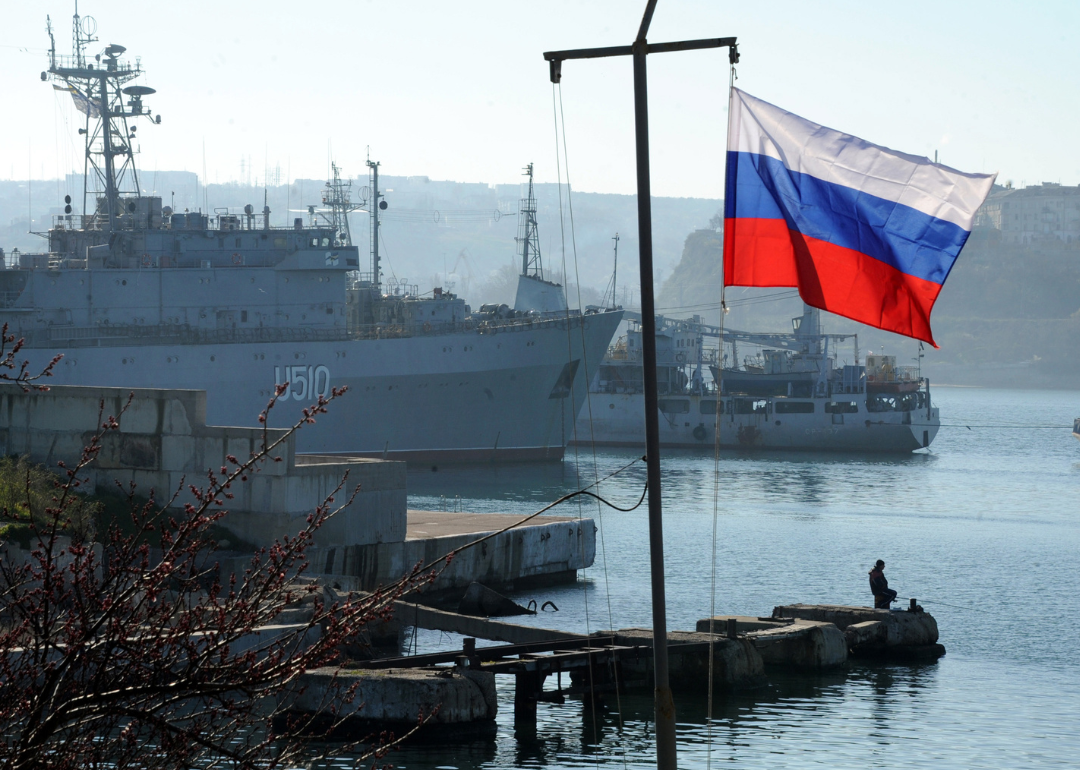 In 2014, Putin made headlines globally when Russia seized Crimea, a large peninsula belonging to Ukraine. The illegal annexation followed the Ukrainian Revolution of Dignity, where Ukrainians in Kyiv protested the government’s choice to align itself more closely with Russian interests rather than signing a trade agreement with the European Union. Ultimately, Ukrainians ousted the president, and the government appointed a pro-Europe acting president and prime minister.

Russian and Ukrainian troops began a standoff in Crimea, ending in the Russian military securing the territory. Putin claimed that ethnic Russians in Ukraine were in danger and needed Russian protection, claims not unlike those made regarding Georgia in 2008.

A referendum given to Crimeans resulted in a vote to return to Russian control, though the vote has been widely contested and is not internationally recognized. Putin quickly ratified the illegitimate measure, kicking off the Russo-Ukraine War. The move was the most significant European land grab since World War II.

Fighting broke out in Donbas, a part of Ukraine with a high concentration of Russian separatists. Pro-Russian Ukrainians teamed up with Russian troops against Ukrainian forces, and over the next year, Russia occupied increasingly more Ukrainian territory. Despite limited attempts at peace through international support for the Minsk agreements, fighting continued. Between 2014 and early 2022, more than 14,000 people died in the conflict, and millions more were forcibly displaced.

By February 2022, tensions between the two countries had reached a fracture point, partly due to massive numbers of Russian troops gathering around Ukraine’s borders. On Feb. 24, Russia invaded Ukraine on several fronts simultaneously, launching a full-on war.

Putin described the move as a “special military operation” meant to protect Russians in Ukraine, whom he claimed were victims of genocide. This rhetoric harkened back to Putin’s propaganda strategy during the Russo-Georgian War, as well as during the annexation of Crimea.

As of September 2022, the estimated number of civilian deaths numbers nearly 6,000, while the count of wounded civilians is over 8,000, according to the UN. Deaths of Ukrainian military personnel exceed 9,000, while estimates of Russian service members lost are roughly 5,000. And in August, the number of Ukrainian refugees displaced from their homes surpassed 13 million, marking the largest refugee crisis since the Second World War. Infrastructure damage in Ukraine has cost the country roughly $113.5 billion.

The conflict in Ukraine is ongoing, with reports of Russian strikes against civilians—including the use of “kamikaze” drones striking residential areas of Kyiv—driving up the death count.

You may also like: Do you know your military traditions?