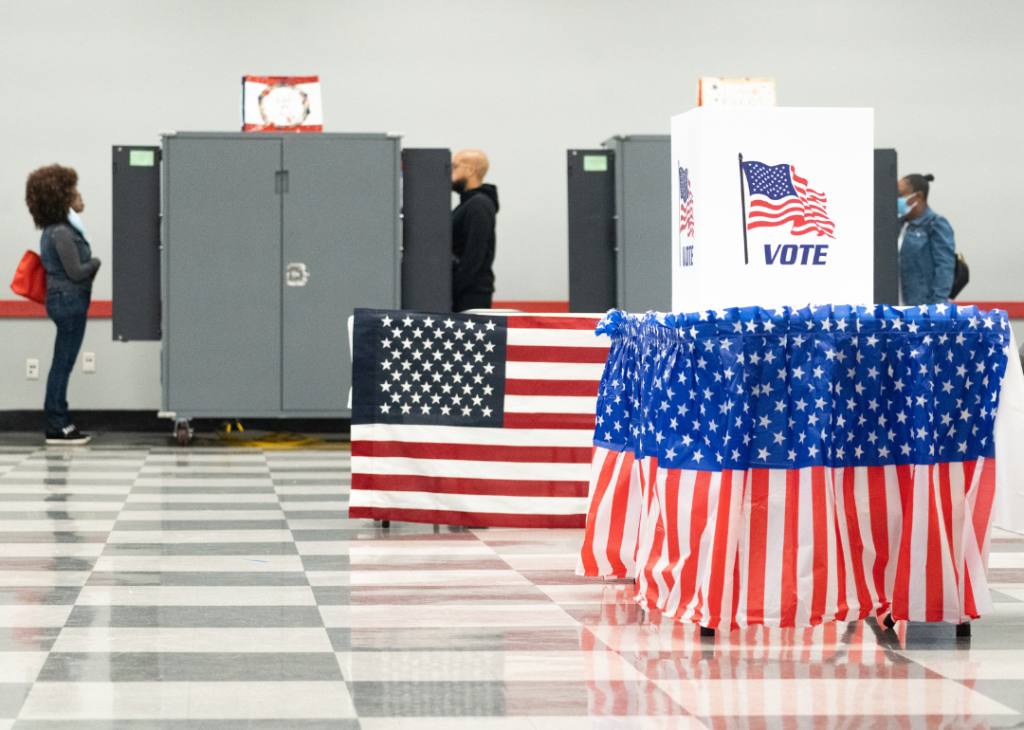 Since Franklin Delano Roosevelt’s sweeping four-term presidency, every president has fallen victim to the “midterm curse.”

The “curse” is considered political shorthand at this point—the opposition party to the incumbent leader will wrest control of the House of Representatives or the Senate from the leadership. In fact, the sitting presidential party has lost seats in the House in every single midterm election since FDR’s first term, save for three: FDR himself in 1934, Bill Clinton in 1998 during his second term in office, and George W. Bush in 2002 fresh off a hotly contested victory in the 2000 general election. In each of these instances, the presidents had remarkably high approval ratings—around 70%—often due to historic moments that offered an opportunity for landmark leadership, such as FDR’s New Deal, Clinton’s federal budget surplus, and Bush’s handling of the aftermath of 9/11.

There are a variety of explanations as to why parties often face defeat in the midterms after sweeping the floor in the presidential election. Voter apathy and presidential approval ratings play a large part, but voters are not the only ones who sway the outcome of elections. Midterm elections are susceptible to impacts from the re-drawing of districts and gerrymandering that may occur after a presidential election and can work to disenfranchise a party’s voting block. This is not a phenomenon isolated to the U.S., either: The parties of political leaders across the globe tend to strengthen early in a presidential term before diminishing later.

With the 2022 midterm elections fast approaching, it can be helpful to look back at the past century of midterms and gauge what patterns may suggest an outcome to this year’s election. Stacker used data compiled by The American Presidency Project at the University of California, Santa Barbara, and the U.S. House of Representatives to visualize outcomes of midterm elections on the president’s political party in Congress.

You may also like: Baby names that are illegal around the world 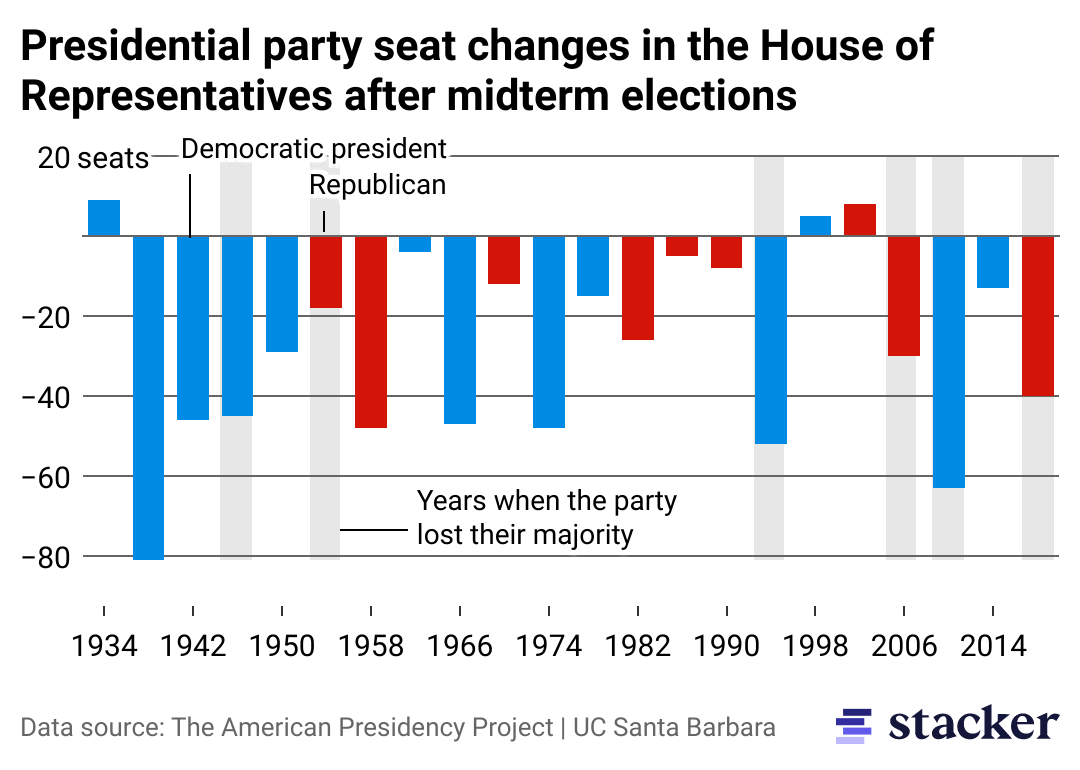 The incumbent party lost control of either the House or the House and Senate six times since 1934. Only three presidents—FDR, Bill Clinton, and George W. Bush—gained seats in the House of Representatives for their parties at midterms.

In FDR’s case, this was thanks to his swift decisions steering the country out of the Great Depression, including the New Deal and various economic relief measures. Clinton’s second term in office marked the first Democratic president to gain a second term since FDR. Though his popularity was beginning to falter due to emerging personal scandals—including the Monica Lewinsky situation, which saw Clinton face impeachment for lying to Congress—it hadn’t yet hit the low that would follow. Bush’s midterms were a narrow race to win an easily swayed power balance, marked by gerrymandering and expensive campaigns that ultimately favored the incumbent party. 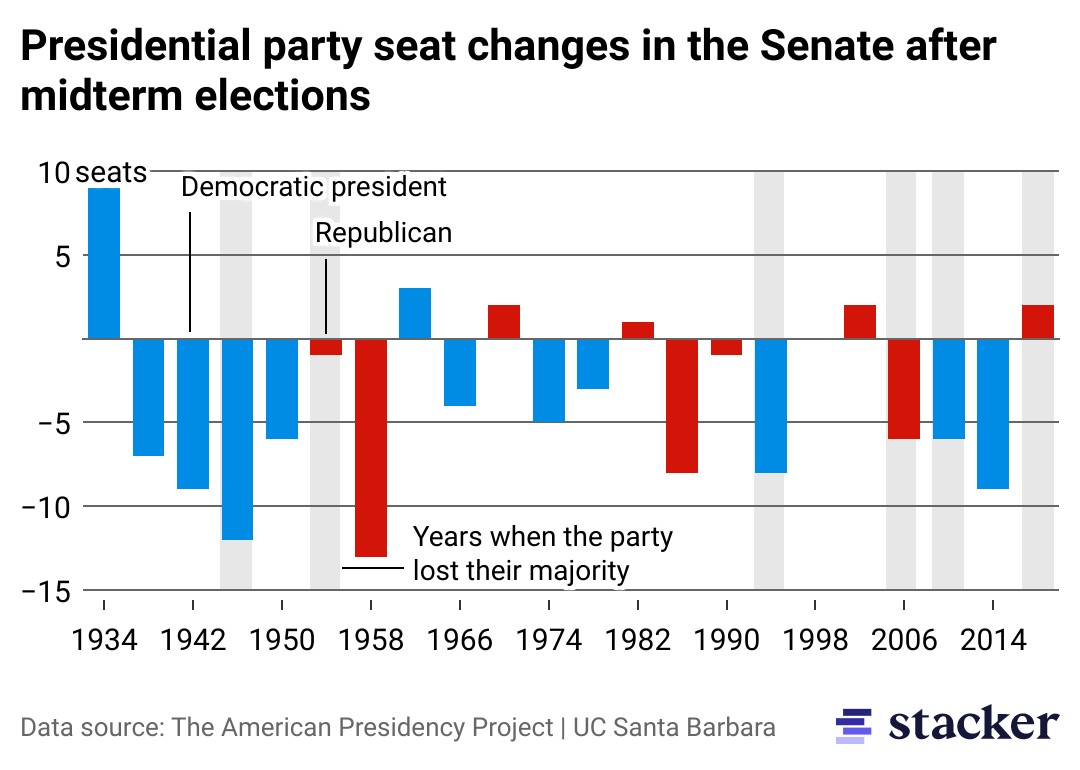 The Senate has faired similarly

Statewide Senate races are not impacted by redistricting but still often suffer the same outcome for the president’s party. For most of the 20th century, Senate races were often won by the opposite party than the state in question had gone for in the presidential race. In 1986, for instance, the “mismatch rate” of U.S. Senate races was around 59%, meaning over half of states voted into office senators of the opposite party than they had voted for president most recently. This has waned in intensity recently—particularly during Obama’s presidency—but still generally held. However, the 2022 election cycle may mark a departure from this tradition, with only 4% of registered voters claiming they planned to vote for a senator from a different party than they had endorsed for president. 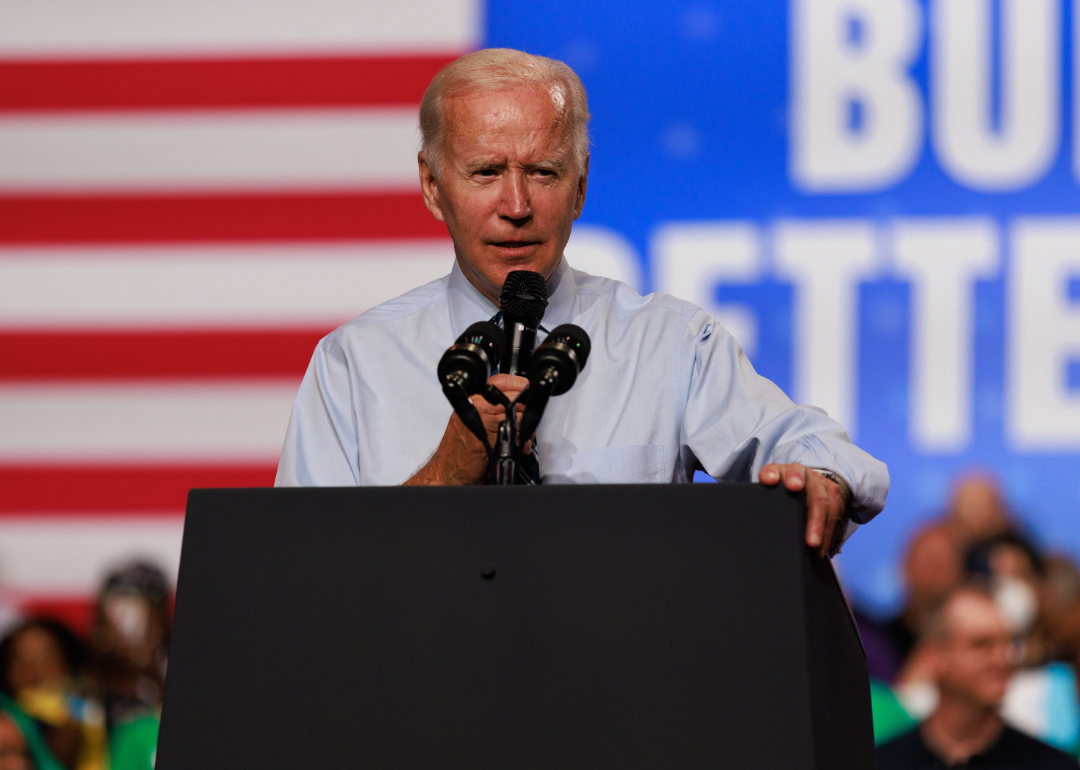 Midterm elections tend to be considered referenda on the party in power. As a result, the electability of Congressional members is increasingly tied to the public’s attitude toward the president. Swing seats have consistently gone to the nonincumbent party when public approval of the current president is low, and the inverse when the public believes their administration is doing well. 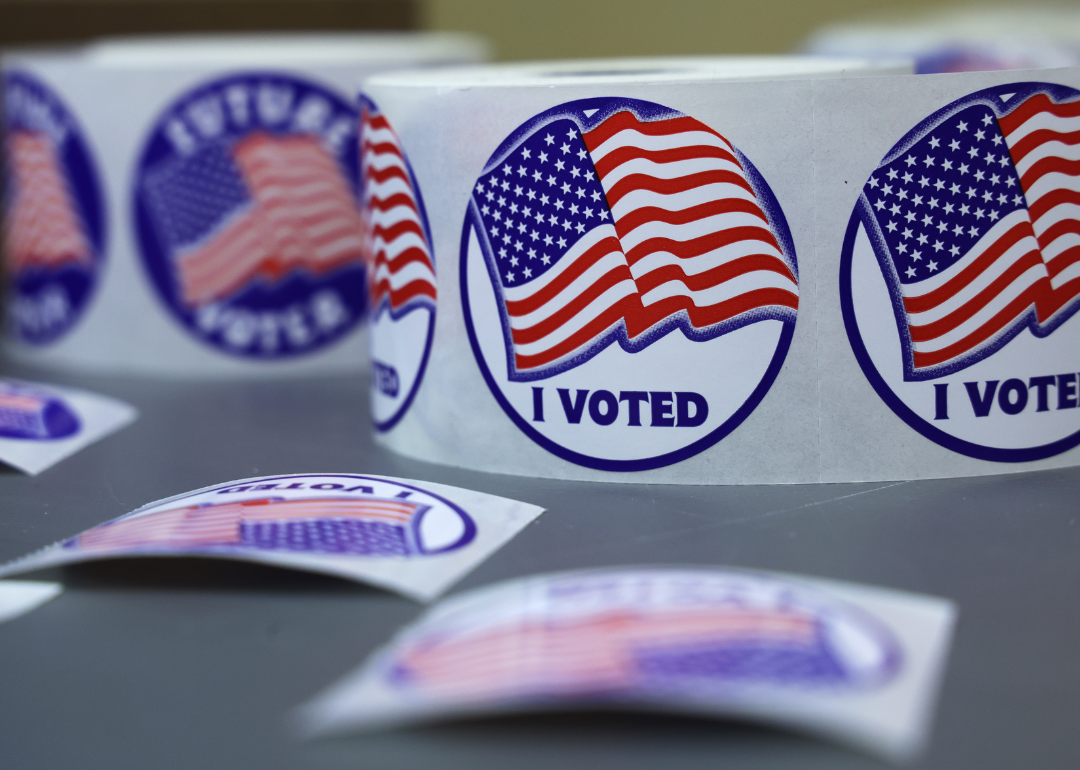 Voters generally turn out in lower numbers for midterms than for presidential elections. In the 2010 and 2014 midterm elections, respectively, only 4 in 10 eligible voters turned up to the polls, whereas 6 in 10 voted in the 2016 general election. However, the drive to overturn the actions of an unfavorable president can be a powerful antidote to voting apathy. A good example of this was the 2018 midterms, in which, according to an analysis by Catalist, “young voters and voters of color, particularly Latinx voters, were a substantially larger share of the electorate than in past midterms.” These voters were majority Democrats, voting in opposition to the Republican incumbent, Donald Trump. That year, midterm surge voting leaped up, and it was “clear that both mobilization and persuasion were critically important in producing this scale of victory for Democrats.” 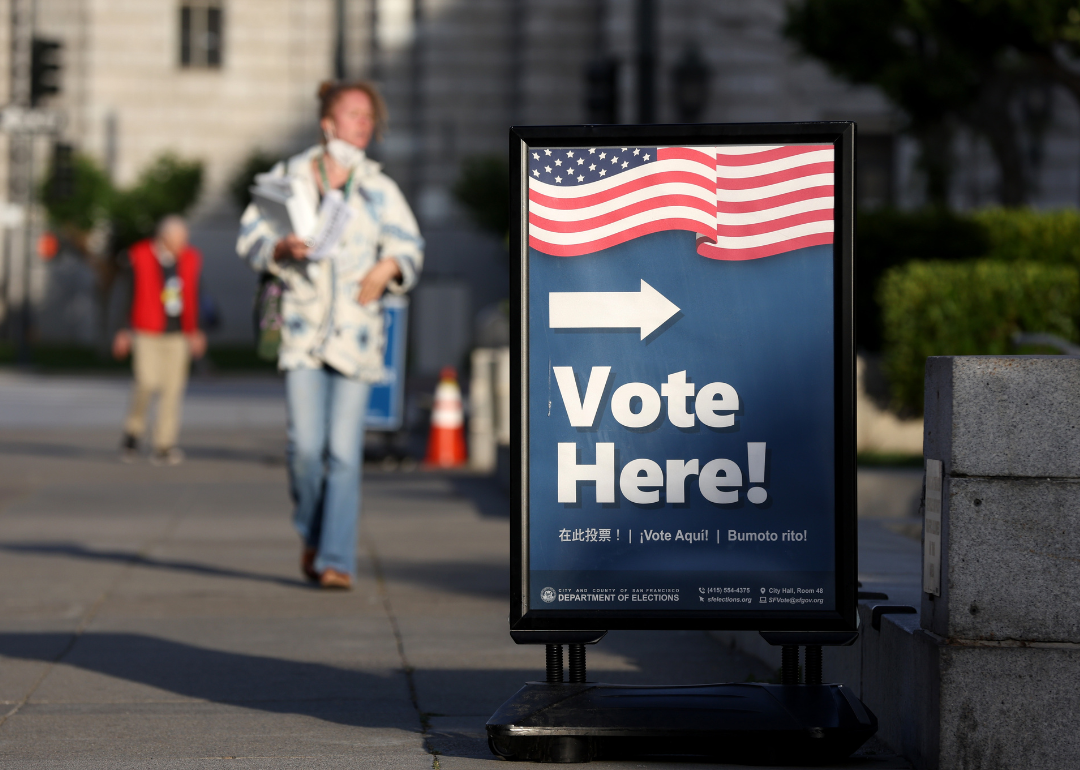 In sum, the 2022 midterms will likely follow the patterns laid out here. All seats in the House of Representatives are up for the taking and a third of those in the Senate. President Joe Biden’s approval rating—40% as of Oct. 20—is on the lower end of historical midterm rates for an incumbent president, suggesting that, if historic precedent holds, Republicans will gain seats on Nov. 8. However, some factors may exert outside influence on the midterm results.

The Democratic Party has been experiencing the same mobilization that spurred a midterm surge during Trump’s presidency, this time regarding issues such as abortion rights and inflation. Voters in Kansas recently turned up in record numbers to vote down measures that would restrict abortion access; elsewhere in the country, local and state legislatures have taken up steps and earmarked funds protecting the right to choose in repudiation of the Supreme Court’s overturning of Roe v. Wade.

On the other hand, Republican-sponsored extremists are doing what they can to stem this tide, threatening election workers so convincingly that there is a feared shortage of people to work the midterms. Moreover, one recent poll suggests that Democrats’ momentum may have begun to stall, particularly among women, who in 2018 turned out to vote in greater numbers than men

You may also like: Highest-paid employees in the White House