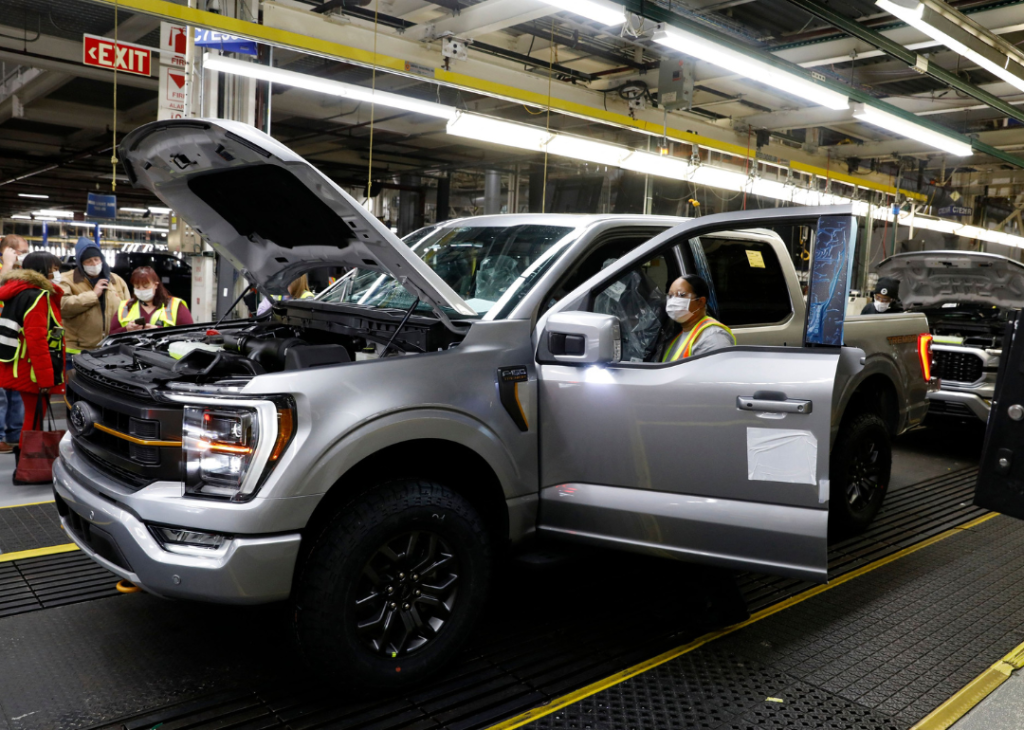 There were roughly 12.9 million manufacturing jobs in the U.S. as of August 2022, down 4.7 million from August 1990. Projections forecast that national manufacturing employment will decrease slightly over the next decade.

Get It Made used Bureau of Labor Statistics Current Employment Statistics data to look at the national trends in manufacturing employment since 1990, and to calculate the percent change in manufacturing employees in each state between June 1990 and June 2022 (the latest non-preliminary statewide data available). This analysis uses seasonally adjusted data. The BLS data is based on a survey, so there is likely some variance from the true employment values.

There are various reasons for the decline of manufacturing employment in the U.S. Some of these reasons apply to the country as a whole, while others apply to specific regions. Nationwide, these factors include automation, skills requirements, import competition, and a decline in job-related mobility in the population.

Keep reading to learn more about the nationwide and regional changes in manufacturing employment. 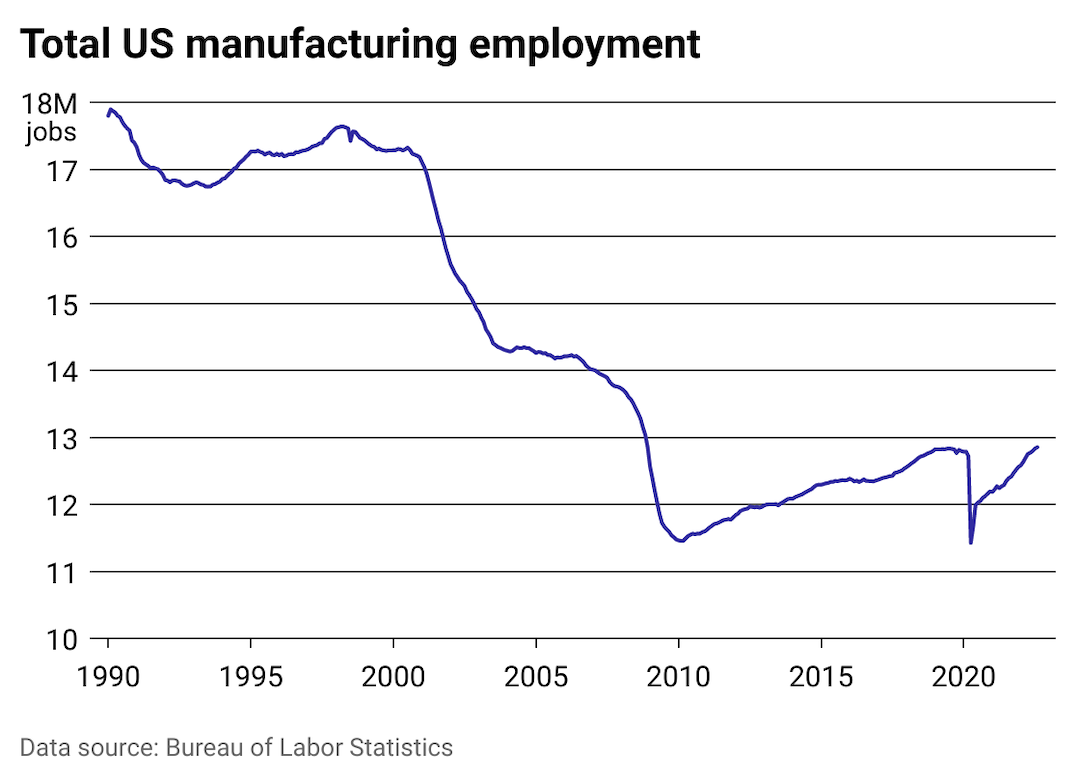 Manufacturing employment has declined in the US

According to many economists, as well as other analysts, a large reason behind manufacturing job losses is productivity growth, which includes AI, robotics and other forms of automation. However, other factors have also had an impact on total U.S. manufacturing employment.

One of these factors is a change in the skills required; there is a gap between the skills workers have and the skills that employers need. The sector has shifted over the last few decades to high-skilled rather than low-skilled labor. Another factor is trade with China, which has brought a massive amount of import competition. Finally, a decline in workers’ mobility is a factor that has led to lower U.S. manufacturing employment. While individuals used to be willing to move for a new job, cross-regional migration due to jobs decreased between 2000 and 2017, according to the BLS. 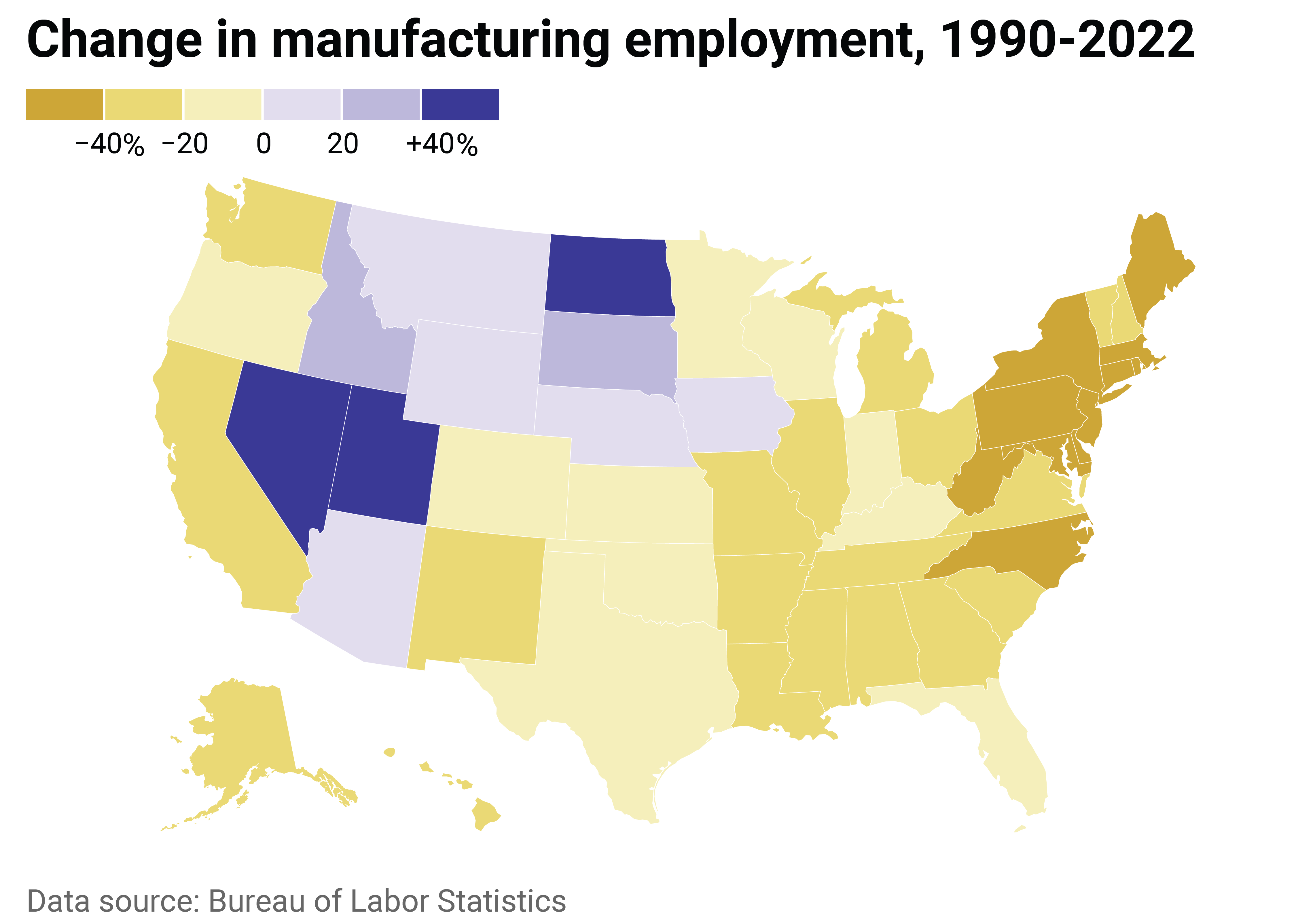 Midwest and Intermountain region states have increased manufacturing employment, while the rest of the country watched it decline

Though manufacturing across the country has decreased, some regions have added jobs in the sector over the past 30 years. In the Midwest, the cities with strong manufacturing industries focus on producing raw and agricultural products and auto parts. In the South, strong industries include those in the historically southern Appalachia-rooted manufacturing of furniture in the Carolinas. Texas and Louisiana are home to much of the nation’s petrochemical complex, as well as oil tanker and liquefied natural gas export terminals along the Gulf Coast.

The Midwest is currently experiencing a resurgence of manufacturing, with manufacturers choosing to relocate there for a variety of reasons, such as the region’s lower costs of housing, staffing, transportation, and warehousing. The Midwest is also located in the geographic center of the U.S. and is crisscrossed by interstate highways, rail hubs, Great Lakes/Mississippi River-linked canals for shipping grain and coal, as well as cargo airports. Additionally, because of the caliber of the people graduating from the top universities that are located in the Midwest, combined with the region’s reputation for friendliness, manufacturing companies are able to recruit employees who are highly skilled and motivated.

Some of the Intermountain states that experienced renewed growth in manufacturing employment from 1990 to 2019 include Arizona, where employment in both fabricated metal production and nondurable goods manufacturing grew, and Idaho, where food manufacturing grew so much, particularly processing the state’s famous potatoes, that it surpassed its preceding peak in the ’90s. Montana is another Western state where employment in nondurable goods grew faster after the 2008-2009 recession. The BLS also included in its regional description the growth in Colorado beverage production—where brew pub and restaurant-hosting craft brewers have expanded their offerings to beer connoisseurs. Nevada, thanks in part to an influx of businesses and people leaving California, saw employment in durable goods manufacturing more than double from the 1990 level.

The Northeast and Mid-Atlantic regions saw some of the steepest decreases in manufacturing employment, largely due to high land and labor prices.