Why the US falls behind in passenger train travel 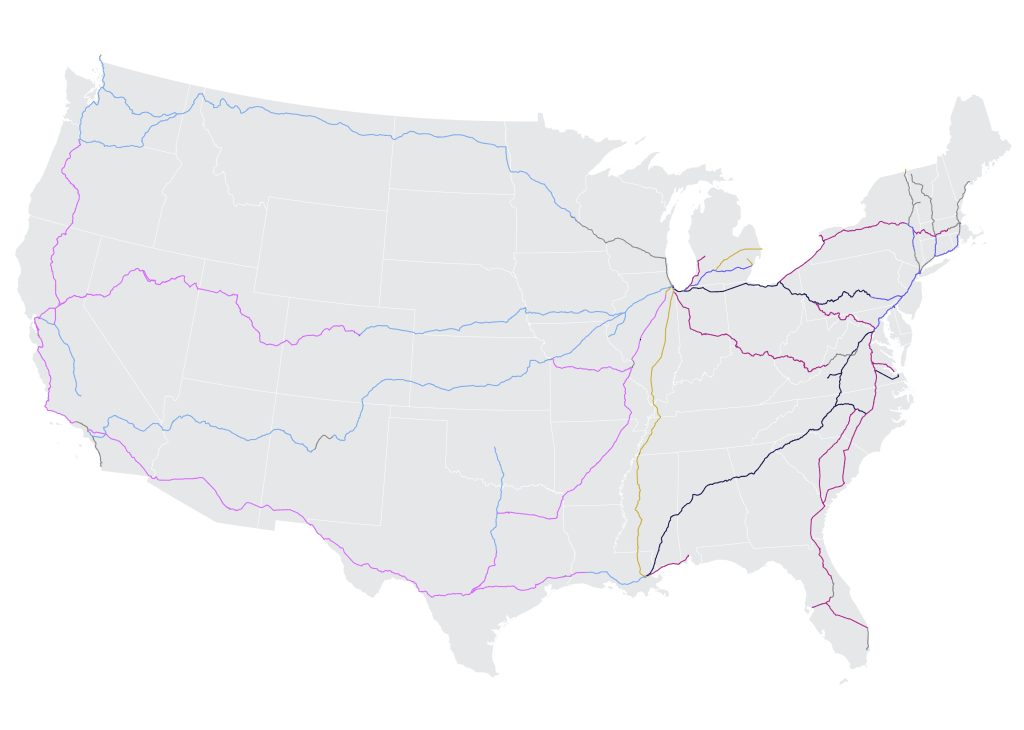 Why the US falls behind in passenger train travel

On Sep. 14, Amtrak canceled all of its long-distance routes in the U.S. There was a looming national railway strike, and although no Amtrak employees were part of the involved unions, the dominant ownership of U.S. rail lines by seven companies left Amtrak and its passengers in the middle of the negotiations.

Amtrak restored service on Sept. 16 after it struck a tentative deal with freight rail workers to avert a strike, but the threat remains. On Oct. 11, members of the Brotherhood of Maintenance of Way Employees Division rejected a proposed five-year contract, opening up a new chance of a national strike occurring around Nov. 19.

Such modern strife fails to convey the vision of rail travel as a comfortable, scenic, and dependable mode of crossnational transportation. Rail in the U.S. first grew alongside the westward expansion. The government granted companies rights-of-way and adjacent land for building railways, which contributed to population shifts, expanded domestic trade, and increased wealth for railroad owners.

The subsequent expansion of the aviation and automotive industries put increased strain on railroad companies during the 20th century. While the U.S. was investing in highways, rail continued to be a largely private venture. Companies consolidated, creating monopolies and duopolies managing different regions.

At this same time, European countries, along with Japan and China, were constructing publicly funded national and crossnational rail systems, some with high-speed technology, such as the Tokaido Shinkansen—the world’s first “bullet train.”

The U.S. government wouldn’t have active ownership in the rail industry until the 1970s when the Rail Passenger Service Act created Amtrak from existing intercity services, and the bankruptcy of freight company Penn Central’s led to the creation of Conrail. Both enterprises, confronted with decades of underinvestment in rail transportation and aging infrastructure, were charged with acting as businesses instead of services.

Fast-forward to 50 years later, the government no longer manages Conrail, and Amtrak’s network has shrunk. Its long-distance routes are now dependent on privately owned lines, leaving the U.S. far behind countries that actively expanded public rail systems in the last century.

In recent years, environmental motivations, wavering gas prices, and a desire for a dependable alternative to air travel—which has lost a significant amount of public trust due to widespread delays and cancellations along with issues such as lost or damaged baggage and consumer complaints—have bolstered a new-found enthusiasm for an expanded national rail system. This vision got a major boost from the Infrastructure Investment and Jobs Act, which earmarked $102 billion for rail investment in both Amtrak and intercity passenger rail.

Sean Jeans-Gail, vice president of the Rail Passenger Association, told Stacker that the vision of a dense passenger network like those in Europe and Asia is far away for most U.S. regions. Still, the concept of a balanced transportation network is gaining momentum, where efficient rail options are competitive with flying and driving.

Stacker cited data from the Federal Railroad Administration, Bureau of Transportation of Statistics, and the Organization for Economic Development to explore passenger rail service in the U.S. and the factors that have made it fall behind other developed countries.

You may also like: A history of US submarines from the American Revolution to today 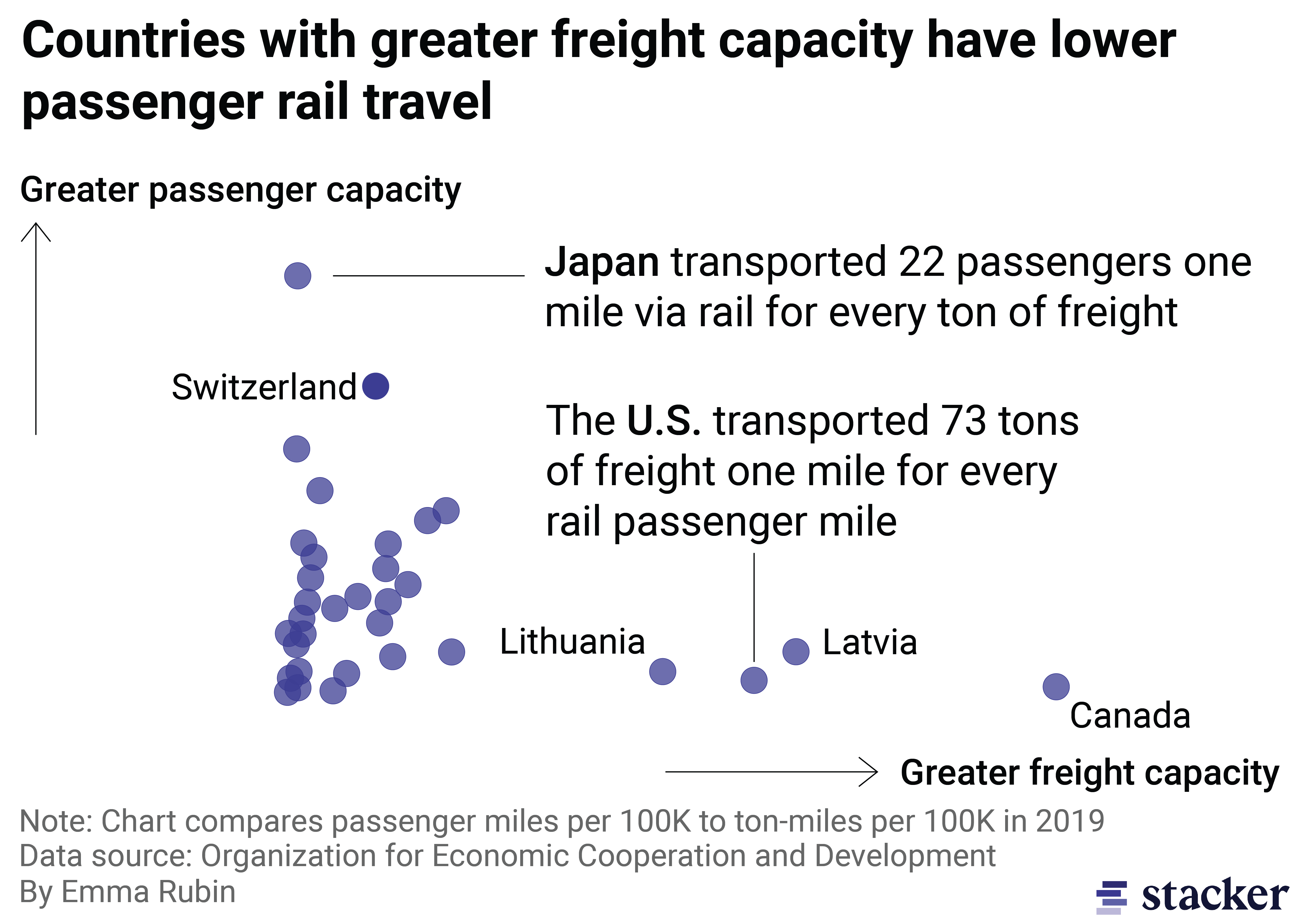 The US has one of the most extensive rail systems in the world, but its primarily used for freight

High-density passenger rail service throughout Europe, Japan, and Korea has outlined a model for efficient transportation between cities without highways. The U.S.’s geographic size makes competitive passenger rail service connecting New York to Los Angeles unrealistic, but there are regional corridors that offer intercity service opportunities that could be comparable to train services operating in smaller countries.

The Northeast Corridor, which connects major hubs such as New York City and Washington D.C., is the best example in the U.S. Still, advocates also see potential in other areas, including Cleveland-Columbus-Cincinnati or Atlanta-Nashville: “We don’t really think of them as big passenger rail regions; however, they’ve seen tremendous population growth in the last couple decades,” Jeans-Gail said.

Even in the Northeast, where regular train options are competitive with driving and air travel, train service is slower than high-speed alternatives in similarly dense international areas.

For example, the 226-mile journey between New York and Washington D.C. takes about three hours on Amtrak’s electrified Acela. A similar 243-mile journey between Lyon and Paris is an hour shorter. And Japan’s Shinkansen covers the 283 miles between Tokyo and Kyoto in just over two hours.

The Acela trains can move up to 150 mph, but usually operate at slower speeds due to aging infrastructure and sharing lines with commuter and freight trains. New Avelia Liberty trains are set to debut in 2023 and will likely reach speeds of 160 mph on certain parts of the track, though they’re capable of reaching 180 mph. 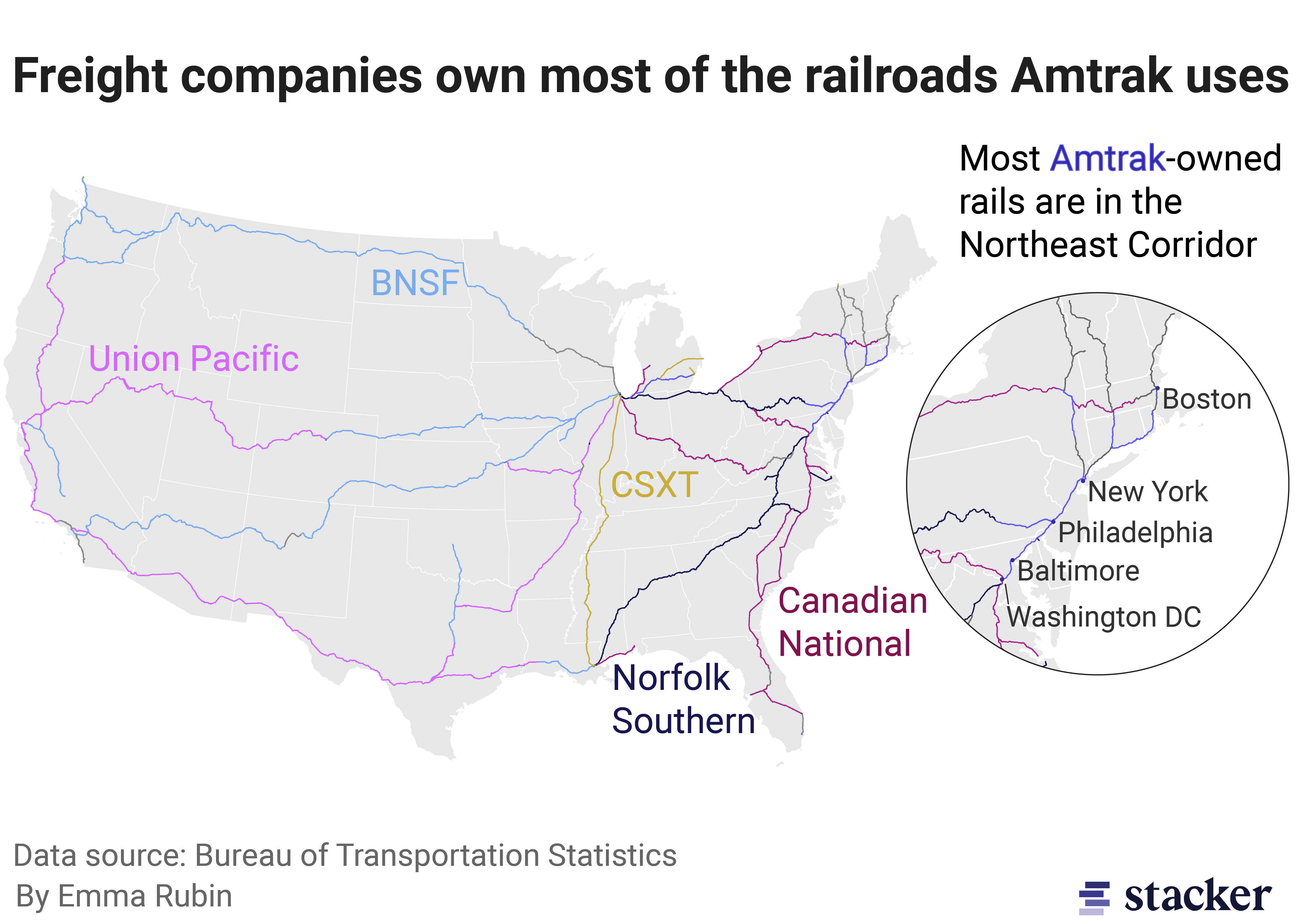 Legally, freight railroads must grant passenger trains preference on their lines when Amtrak pays a “fair price” to operate on the line, and there is no unreasonable impairment of operations.

But what constitutes an impairment of operations has proven difficult to define, giving dispatchers the authority to hold up passenger trains in deference to prioritizing freight trains, which can be over 1 mile in length and cause significant delays.

A Stacker analysis of all minutes lost to delay in Q1 2022 on long-distance routes running on host railroads that ran at least half an hour late found that 60% of all minutes delayed were caused not by Amtrak but by the host rail lines on which Amtrak was running its service.

Still, there may be opportunities in higher population corridors for passenger and freight rail to coexist more efficiently.

Jeans-Gail pointed to California, where Amtrak and regional commuter rail authorities operate multiple trains daily on freight railroads and where passenger train fees are a reliable source of revenue. With once or twice daily trains, “You don’t really give them enough money to justify running their railroad any differently,” Jeans-Gail said. 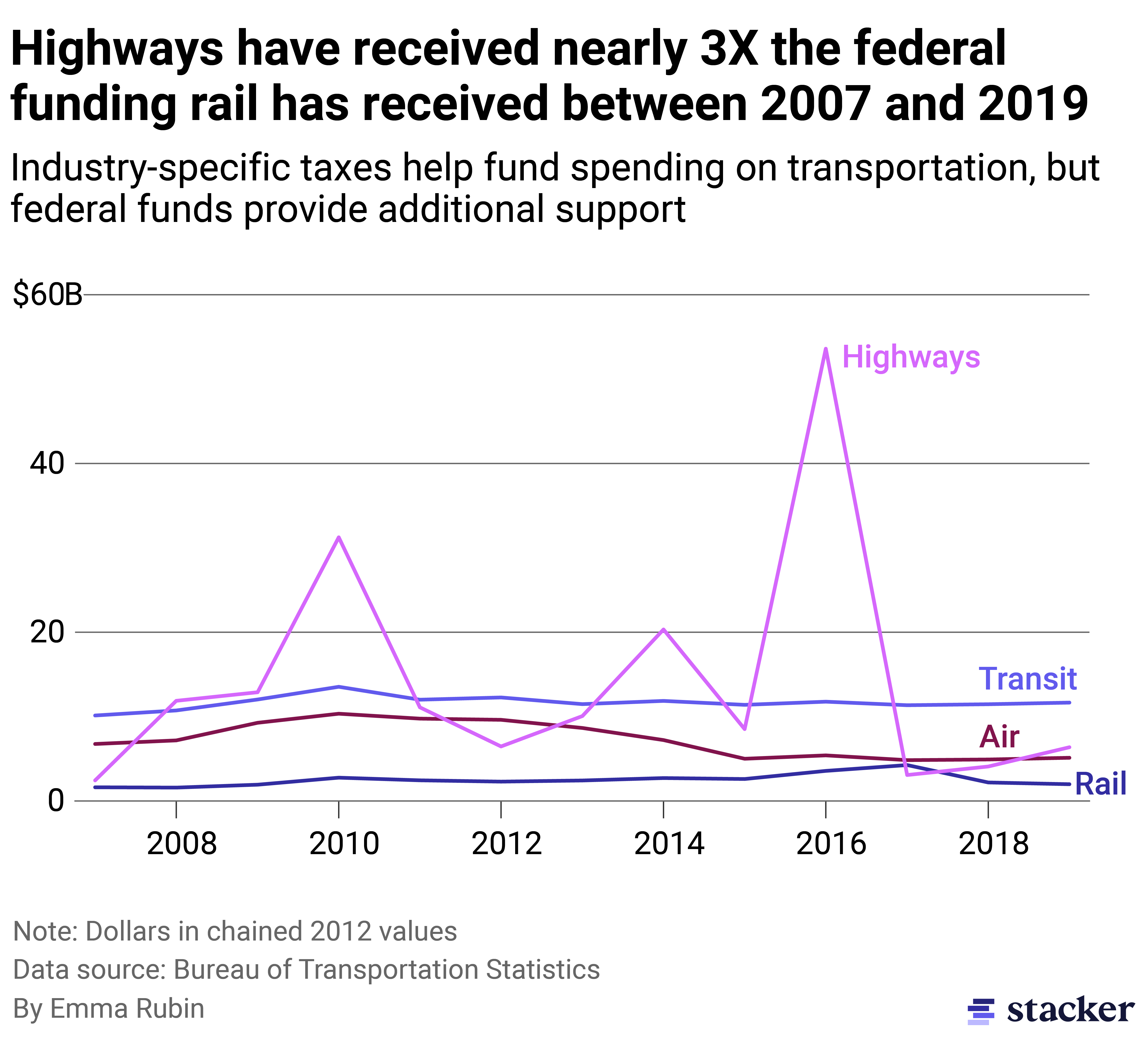 Investment in rail has lagged behind highways and air travel

Amtrak, officially a public enterprise, has wavered between operating as a business and as a public service. Since its founding 50 years ago, it has perpetually operated on a deficit. Critics of federal rail investment often point to Amtrak’s low revenues that can’t support passenger rail service. Still, federal subsidies have supported other modes of transportation in the U.S. at a higher rate than rail.

Truck, gas, and other road-related taxes support highway revenues, but highways still rely on additional federal support for projects and maintenance. The Highway Trust Fund received $270 billion between 2008 and 2021, and the Government Accountability Office estimates it will need an additional $191 billion infusion over the next decade.

During the COVID-19 pandemic, the airline industry received significant relief, including $54 billion in payroll relief to prevent layoffs and furloughs.

The Infrastructure and Investment Jobs Act clarified the code defining Amtrak’s purpose, deemphasizing the focus on its profitability.

Amtrak’s goal is to “provide efficient and effective intercity passenger rail mobility consisting of high-quality service that is trip-time competitive with other intercity travel options” rather than “exercise the corporation’s best business judgment in taking actions to minimize federal subsidies.” The change in language and additional rail funding heading Amtrak’s way could support passenger rail expansion. 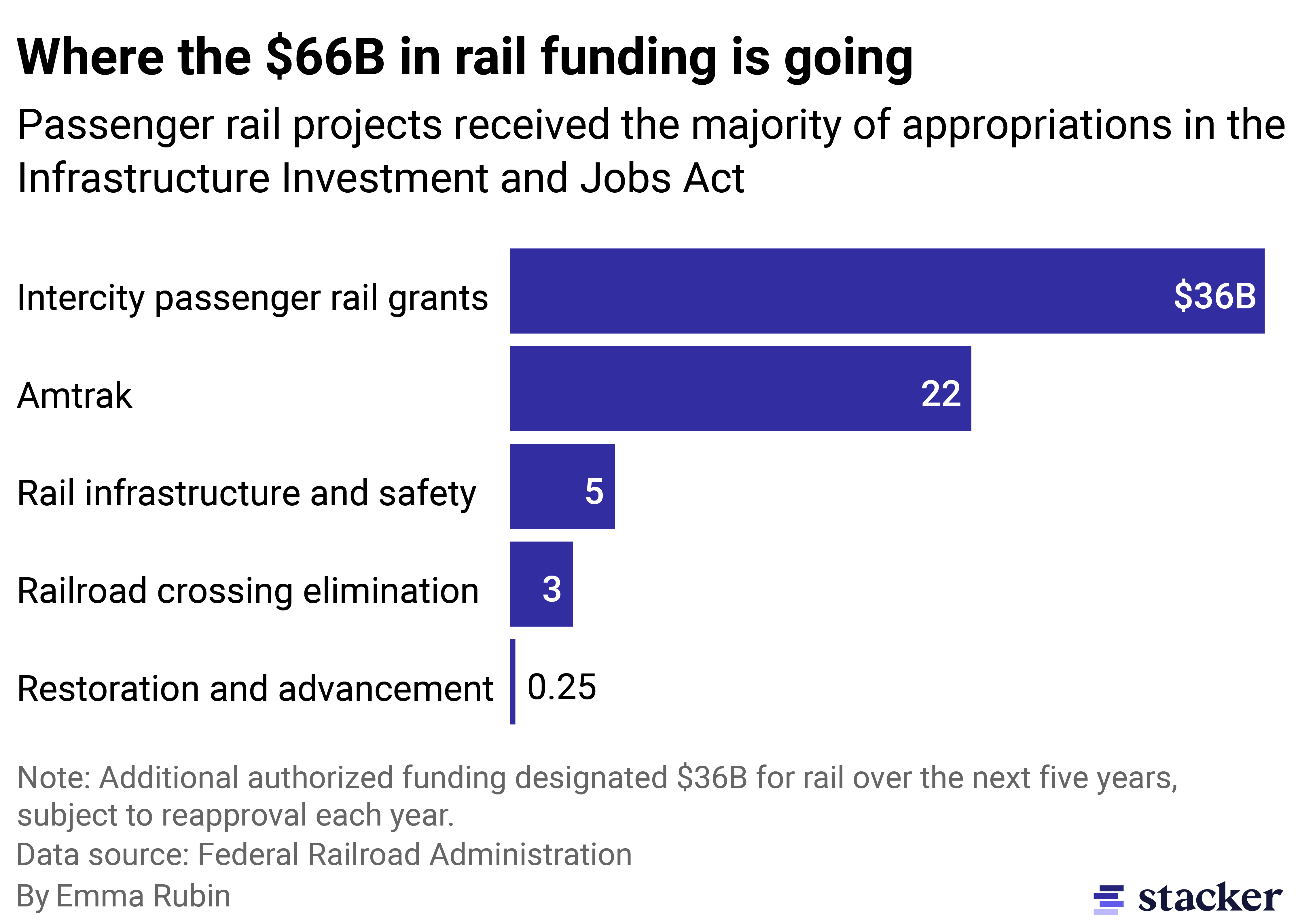 The infrastructure bill directly awarded $22 billion over the next five years to Amtrak, the most significant single investment it’s ever received. It could receive additional funds through grants distributed by the Federal Railroad Administration, which state agencies may also compete for.

The funding comes on the heels of Amtrak’s Connect Us plan, a $75 billion “vision” to add new connections and enhance existing routes. Beyond the funding, the 15-year plan also emphasized the importance of laws clarifying language overseeing host railroad access.

The infrastructure bill grants have also encouraged other states to consider how they could invest newly available funds into rail development, including an expansion of the Heartland Flyer through North Texas, Oklahoma, and Kansas.

However, building rail in the U.S. is often more expensive than in other countries. One need perhaps only turn to the ongoing difficulties hindering California’s burgeoning high-speed rail project for an example of significant cost overruns impacting rail growth. An Eno Center for Transportation analysis found that rail transit projects cost 50% more in the U.S. than in other countries, even when running along existing rights-of-way.

While some passenger rail enthusiasts prefer a publicly funded model expanding Amtrak and state capacity, the U.S. has also begun to see growing private investment. Brightline operates trains in Southeast Florida and is preparing to break ground on a new track connecting Los Angeles and Las Vegas. The Texas Central Railway, expected to open a route connecting Dallas and Houston in 90 minutes by 2026, is also privately owned.