The current complex state of car sales explained in 3 charts 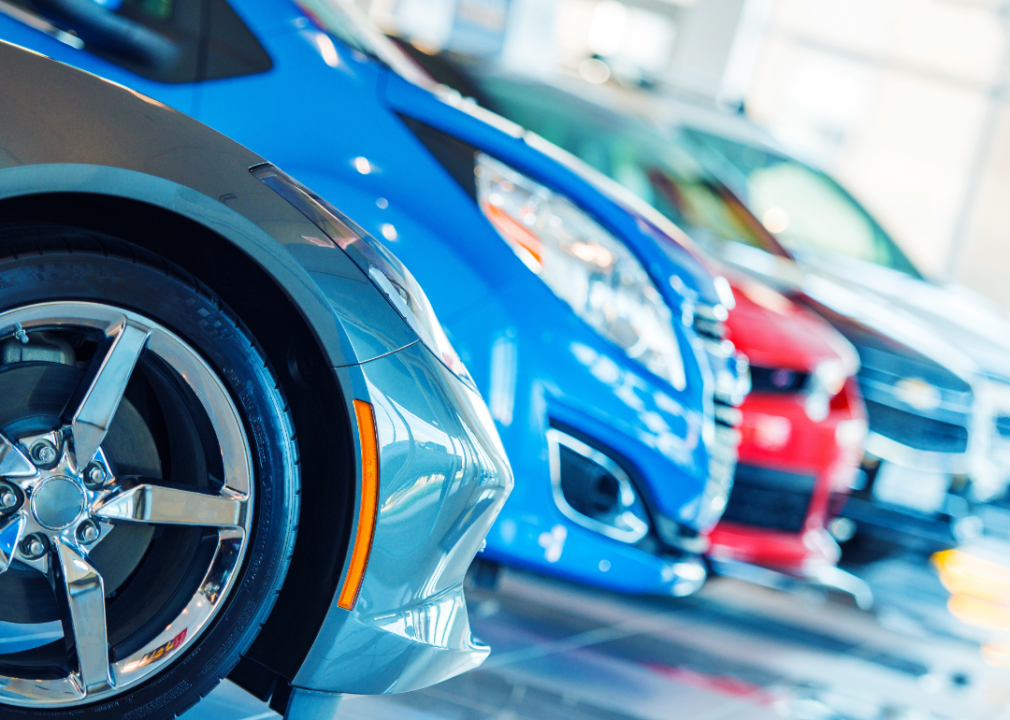 The current complex state of car sales explained in 3 charts

New vehicles are pricey—but used vehicles may be even pricier. Such is the state of the car market in 2022. In fact, the cost of buying a vehicle, regardless of its condition, increased at the fastest rate in recorded history last year. How did the U.S. car market get here, and is there hope that price increases could slow down?

In April 2021, American dealerships sold nearly 19 million vehicles. The last time demand for vehicles was similarly high was in July 2005. The uptick in demand came on the heels of not only COVID-19 manufacturing disruptions, but also a trend of declining domestic car inventories that’s been playing out since May 2017.

Squeezed inventories and high demand have pushed prices sky-high. The Biden Administration considers high vehicle costs to be a leading factor contributing to inflation in the U.S. The administration supported subsidies that Congress passed in July 2022 to bring investments in computer chip manufacturing to the U.S. Auto industry experts are also keeping an eye on Hurricane Ian’s impact on the used-car market. An estimated 50,000 vehicles were damaged, and the demand for replacement vehicles—experts predict that 80% of them will be used cars because of low inventory for new cars—could drive up higher prices for Floridians.

Nationally, signs are beginning to show that American consumers can no longer absorb the rising costs or are no longer willing to do so. Consumer confidence measurements from July show fewer Americans plan to buy a vehicle in the second half of 2022. 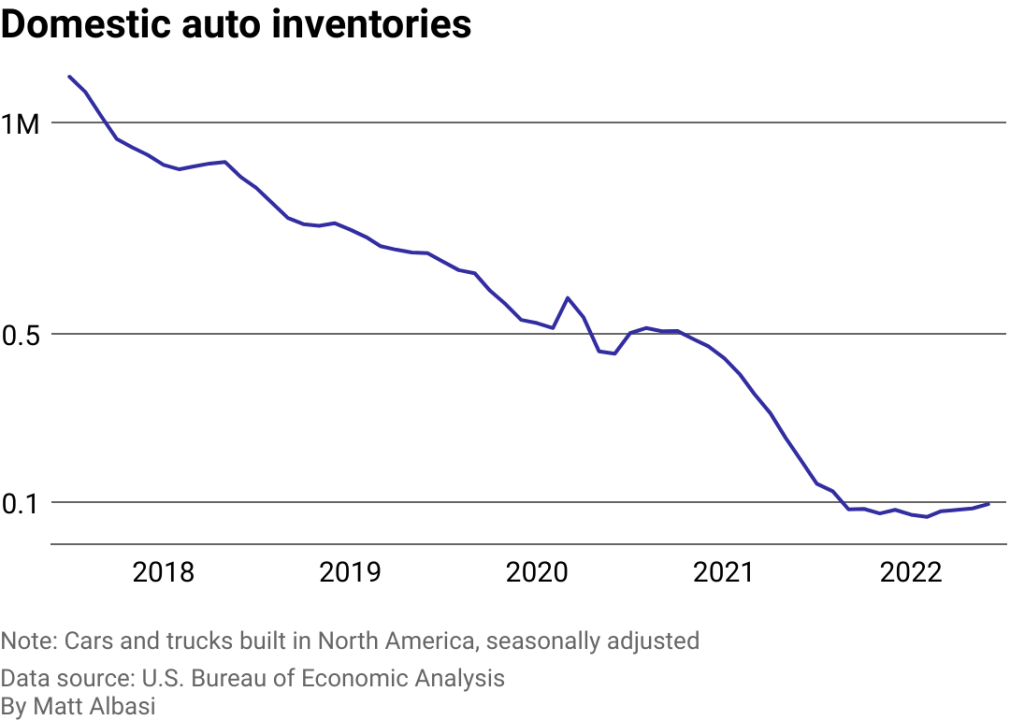 The pandemic worsened a preexisting decline in inventories

Auto inventory—which represents all cars and trucks built in North America and made available to consumers on U.S. car lots—has declined since peaking in May 2017.

America spent the lead up to 2017 digging out of the previous recession, which also wreaked havoc on the automotive sector. After hitting a peak, automakers produced fewer vehicles in the years leading up to the COVID-19 pandemic to match a decrease in demand from consumers. Over this period, manufacturers like General Motors prioritized production of its most profitable models, which tended to be trucks and SUVs.

But today, inventory has dipped so low that any comparisons to inventory levels during the depths of the Great Recession make today’s availability look dismal. Between 2009-2011, auto inventories hovered around six times what they are now.

Many new vehicles are already spoken for before they even reach a dealership lot. On average, a new vehicle now sells in 19 days once it’s delivered to the dealer—down from 29 days the same time last year, according to a J.D. Power analysis. 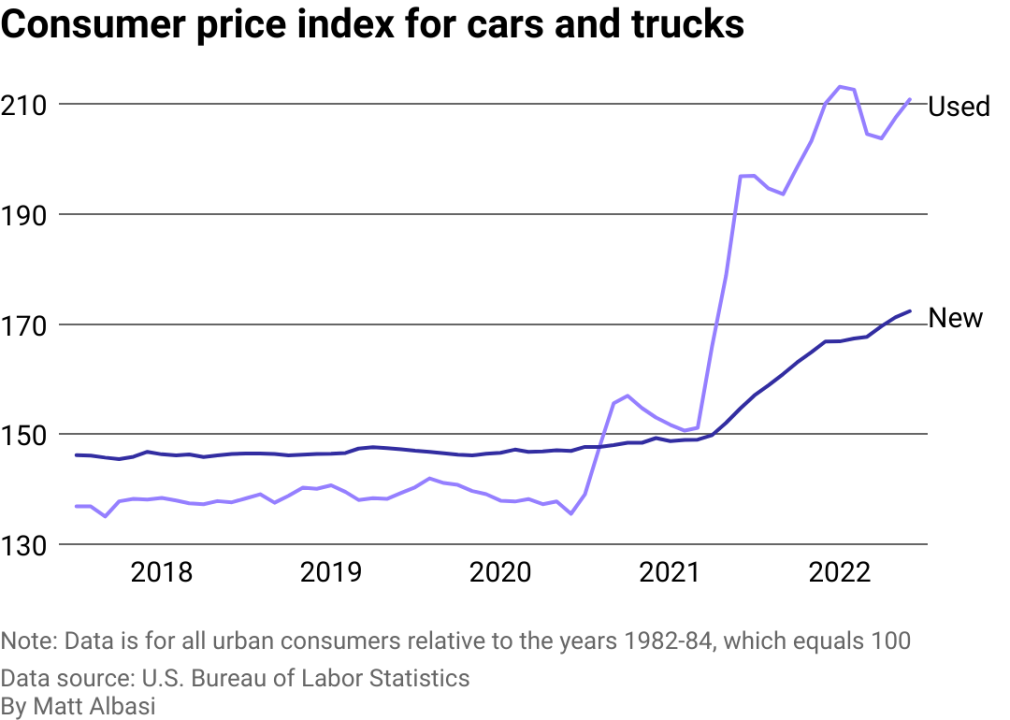 Used cars and trucks cost consumers around 20% more than new vehicles, according to the Consumer Price Index. The CPI measures the change in vehicle prices over time, meaning it does not show the real price of a car today, but rather tells us how much the price of a car is today relative to the price of cars historically. This index specifically uses the period between 1982-1984 as a benchmark.

Used vehicle prices eclipsed new vehicle prices in 2021 when automakers began struggling to keep up with demand. Consumers turned to used car lots and sites where they had more choices, driving up the price of used vehicles.

Domestic automakers like GM and Ford had to close assembly plants or run these facilities on lean schedules to slow the spread COVID-19. Foreign manufacturers are still struggling to produce enough vehicles under China’s approach to COVID-19, which is to keep spread to a minimum regardless of the economic consequences.

As 2021 progressed, a shortage of semiconductor chips needed to produce the latest and greatest vehicle models was the main factor hampering production of new cars and trucks. Due to the chip shortage, new vehicles have also rapidly increased in price since 2021, though not at nearly the same pace as used ones. The trend could be changing, however, with used car prices recently falling slightly but not yet back to pre-COVID-19 norms. 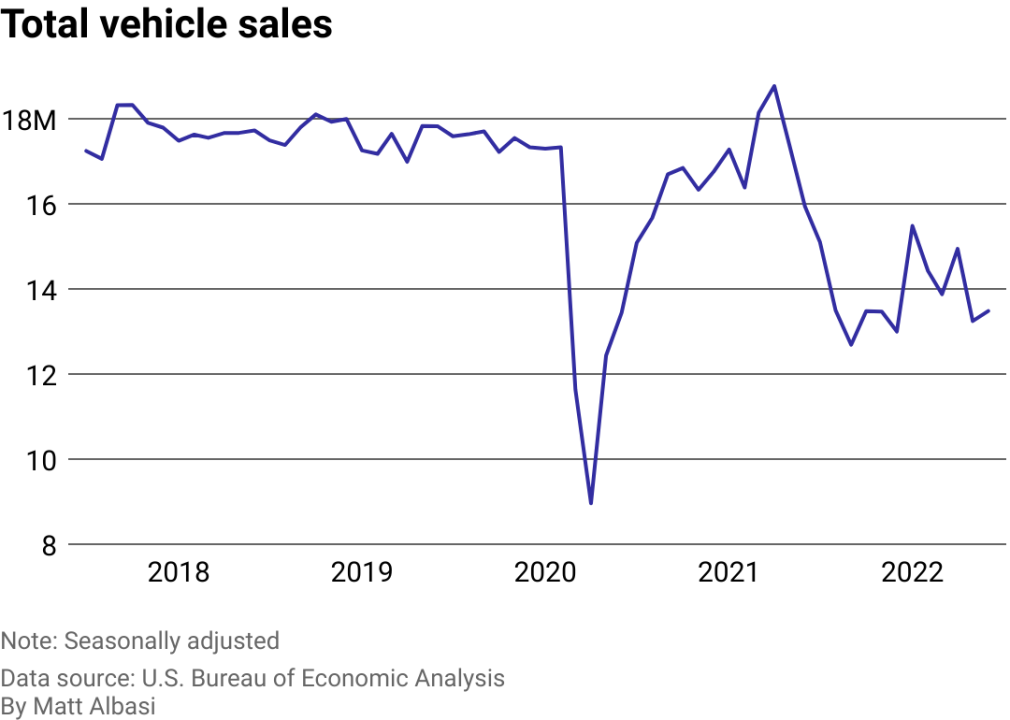 Vehicle sales fell off dramatically in spring 2020 with the arrival of the COVID-19 pandemic. Americans became less interested in buying cars as they stopped traveling to work, leisure, or even to visit friends and family down the street, per the U.S. Bureau of Economic Analysis. The entire economy fell into a deep but brief recession—the shortest on record, in fact, lasting only two months according to a July 2021 release from the National Bureau of Economic Research.

When sales bounced back, they did so equally as dramatically. Sales jumped to levels not seen in more than a decade, and certainly not in the last five years, according to Bureau of Economic Analysis data. The average cost of a new vehicle hit a record high in the summer of 2022 by reaching $48,182 in July, according to Kelley Blue Book.

Dealerships were also marking up the prices of new vehicles by more than $700 on average this past summer. That’s after posting record profits in 2021. “This elevated per-unit profit level is more than offsetting the drop in sales volume,” said Thomas King, data analytics head at J.D. Power, in a July 2022 memo.