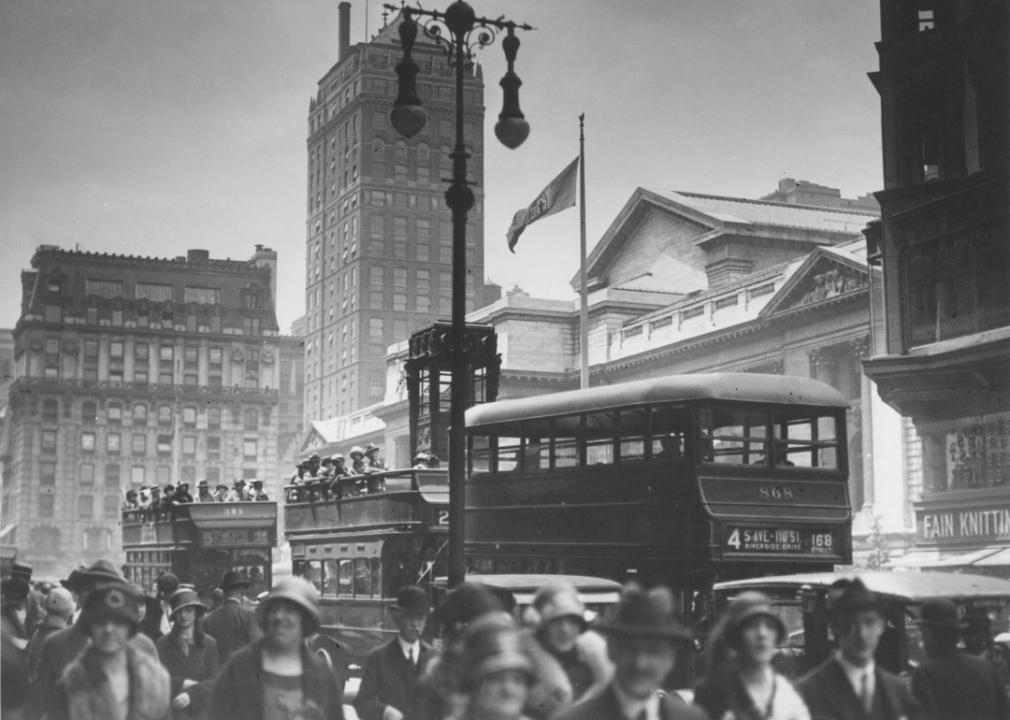 One of the nation’s first metropolises, New York City has always been a center for commerce and culture. The 1920s were a vitally important decade in the shaping of the city, in that those years affected everything from industries to population makeup to the physical layout of its streets.

By the end of 1929, the city’s population had almost topped 6 million. Although immigration restrictions were put in place in 1924, the tide of newcomers hardly stemmed, and nearly 35% of the city’s residents were foreign-born. These residents—who largely came from Russia, Italy, Ireland, Germany, and China—brought with them years of experience and expertise in dozens of fields, but primarily in apparel. It was their contributions to the clothing and textile industries that helped to solidify New York as the fashion capital of the world.

The arrival of all these new folks, as well as the business and industries they brought with them, also meant New York found itself in dire need of more space to house families and companies. So the city built up, and the 1920s saw a skyscraper boom—the Chrysler Building was erected around this time. It wasn’t just Midtown that underwent these massive changes, but Harlem as well.

The First Great Migration (which hit its peak during the ’20s) brought some 200,000 Black Americans from the Deep South to Harlem. The Uptown neighborhood became something of a mecca and inspired a renaissance in Black music, dance, art, fashion, literature, theater, politics, and scholarship that the city is still benefiting from to this day.

It’s hard to paint a true picture of how greatly the 1920s changed New York City in words alone, so Giggster scoured historical archives to compile a collection of 20 photos that best illustrate what life was like in the city that never sleeps 100 years ago. From aerial views of neighborhoods to street-level glimpses of daily life, these photos bring the city to life in a whole new way. 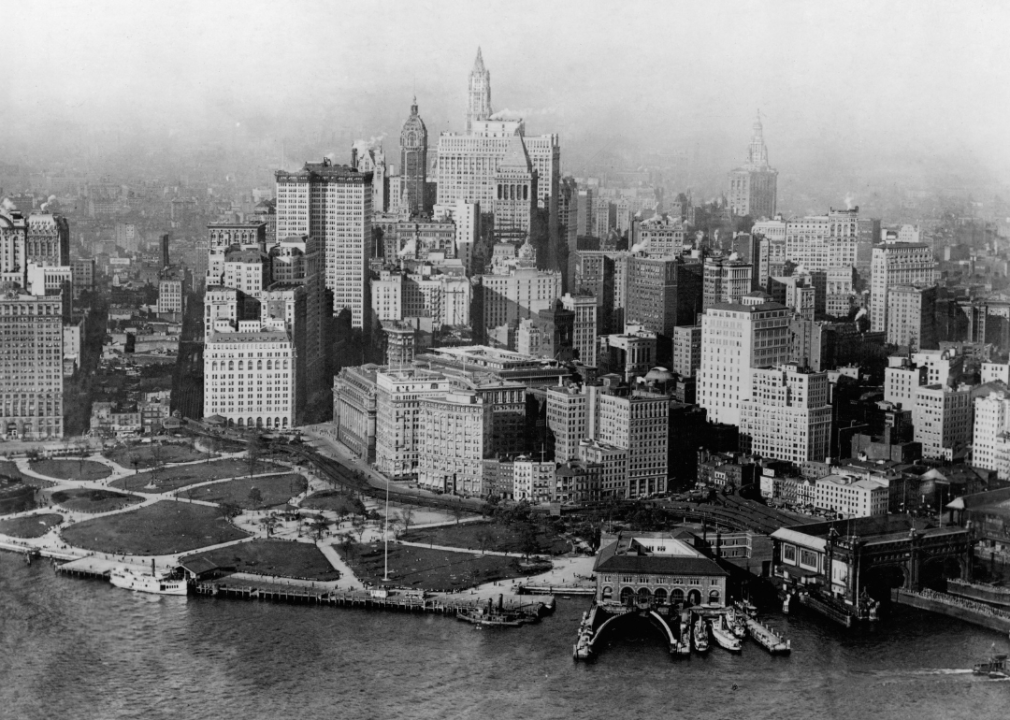 Taken in 1923, this aerial view of Lower Manhattan features Battery Park, the South Ferry Terminal, and, in the distance, the Woolworth building, which was the tallest building in New York throughout the 1920s.

Named after the New York Times building that was erected on its southern end in 1905, Times Square didn’t become the hub it is today until the 1920s—when all of the subway lines, elevated railroad lines, and bus lines added stops along 42nd Street. 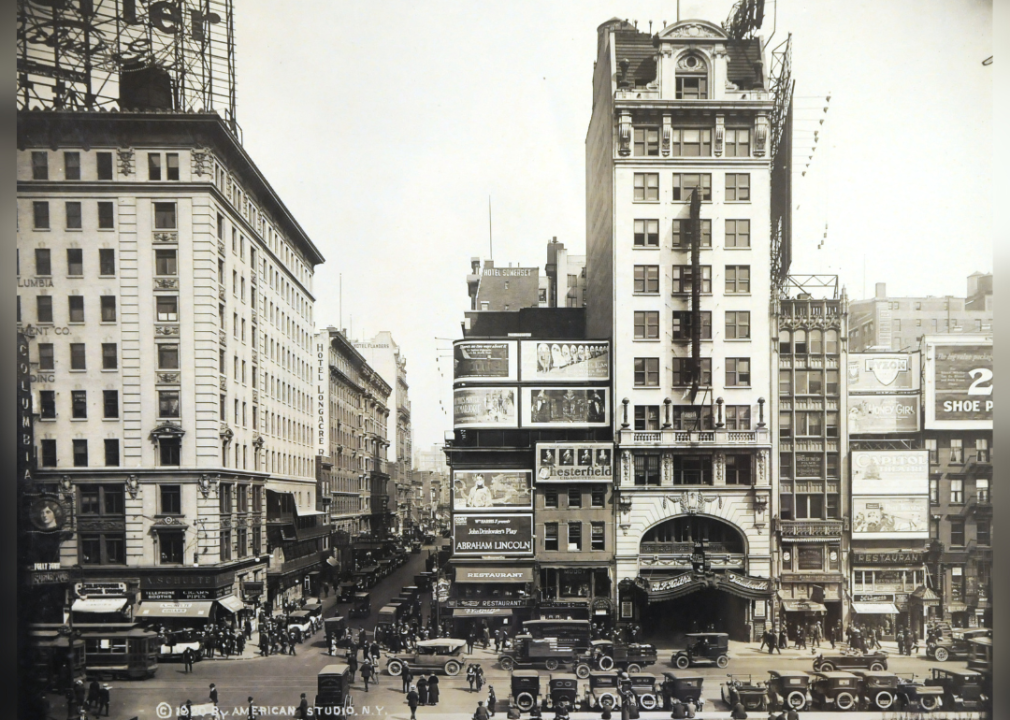 Near the northern end of Times Square lies the Palace Theater, one of New York’s oldest and most popular Broadway playhouses. Pictured here in the 1920s, the Palace would have been a thriving vaudeville theater, considered the flagship destination for the genre’s performers. 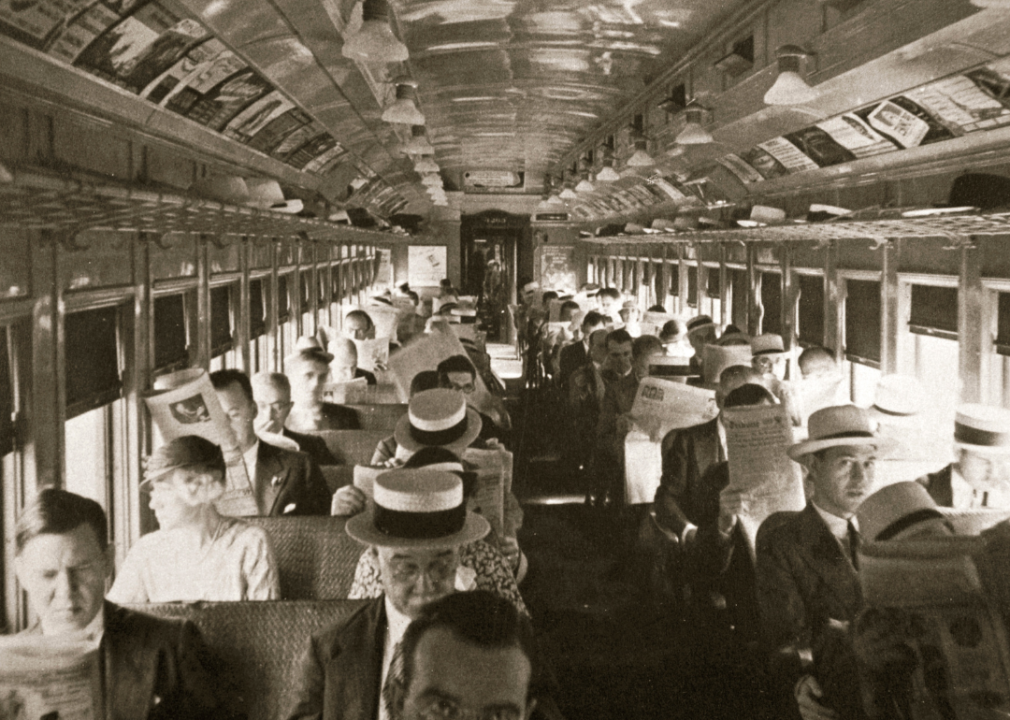 By the 1920s, the elevated train—one of New York’s first attempts at a borough-connecting public transit system—was on its way to extinction. With the development of the underground subway (which, by this decade, connected Manhattan, Brooklyn, and Queens), the slower-moving above-ground trains were quickly becoming relics of the past. 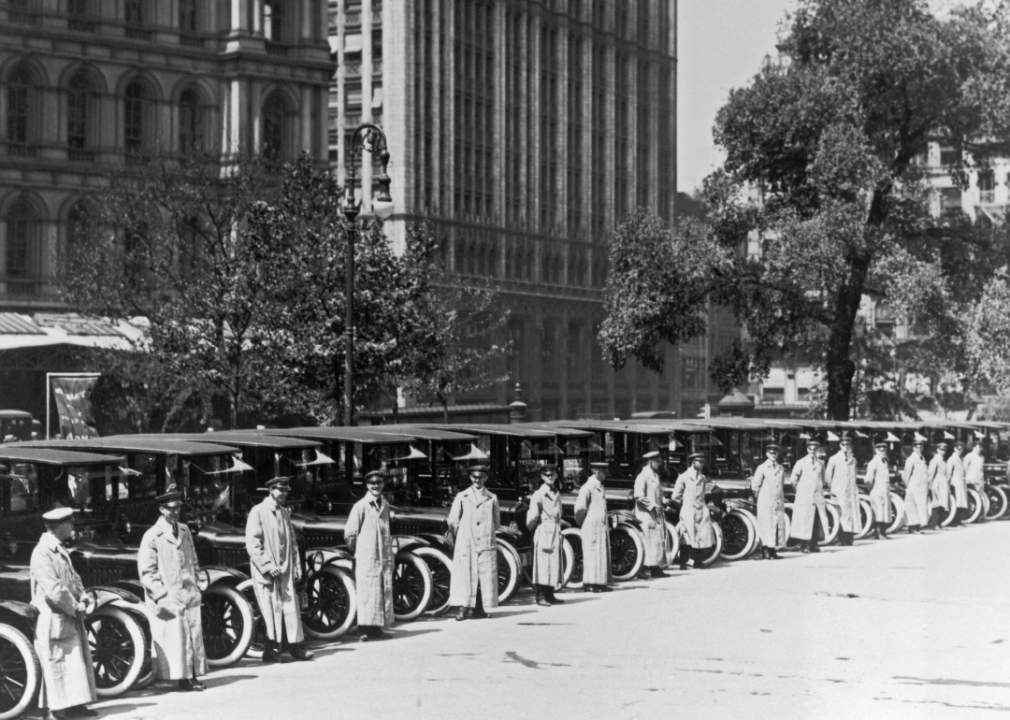 Arguably the most iconic New York City yellow cab, the checkered taxi, first began picking up passengers in 1922. Unlike later iterations of this famous line, the original yellow cabs were mostly black, with the now-iconic yellow in evidence only on the cab’s doors. In that decade, there were some 7,000 yellow cabs rolling up and down the city’s streets. 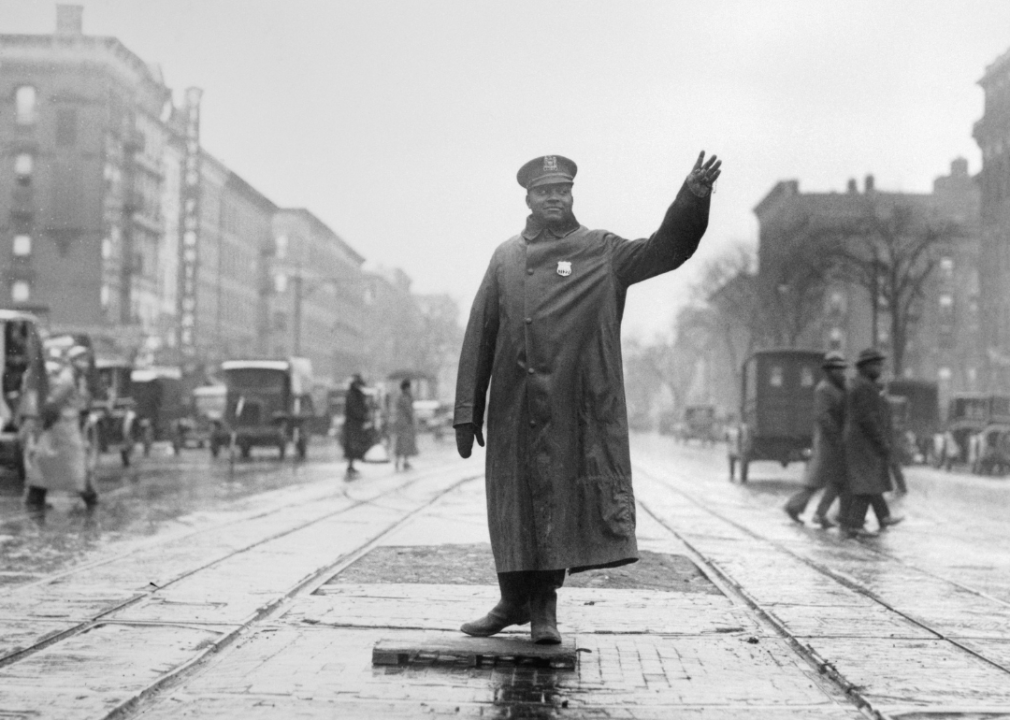 While the city was largely still segregated throughout the 1920s, Harlem had become the Black capital of the nation. Between 1910 and 1930, the Black population in the neighborhood grew by a whopping 40%, transforming into the flourishing center of Black culture and art. 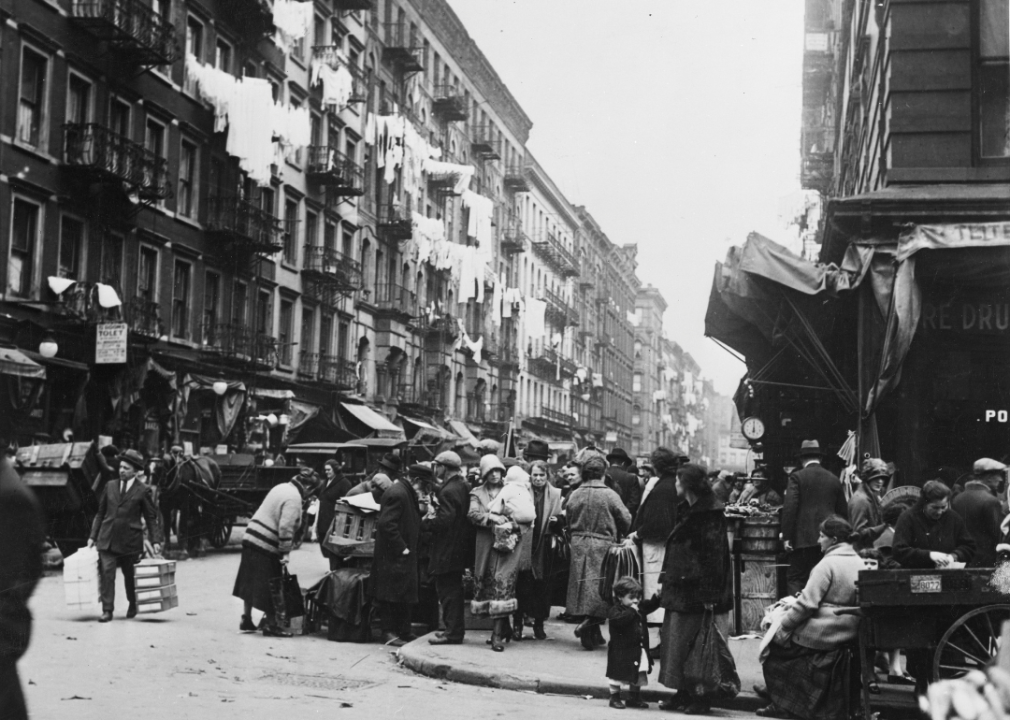 Another of the city’s most culturally diverse neighborhoods in the 1920s was the Lower East Side. For decades, the neighborhood had been welcoming many of the city’s immigrants, and in the early parts of the 20th century, it became home to thousands of Eastern European Jews, many of whom were fleeing conflicts in their home countries. 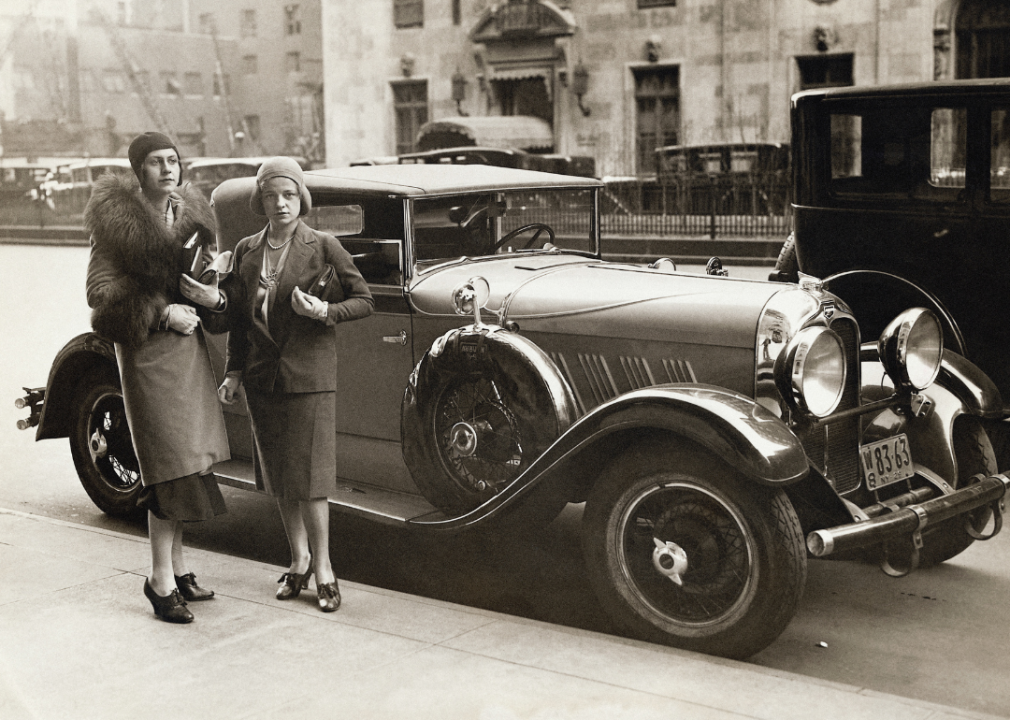 The fashion capital of the world

New York has long been considered the fashion capital of the world, and in the 1920s socialites like Cornelia Prime (left) and Katrinka Suydam (right) were setting trends with their simple lines, shorter hemlines, and cloche hats. 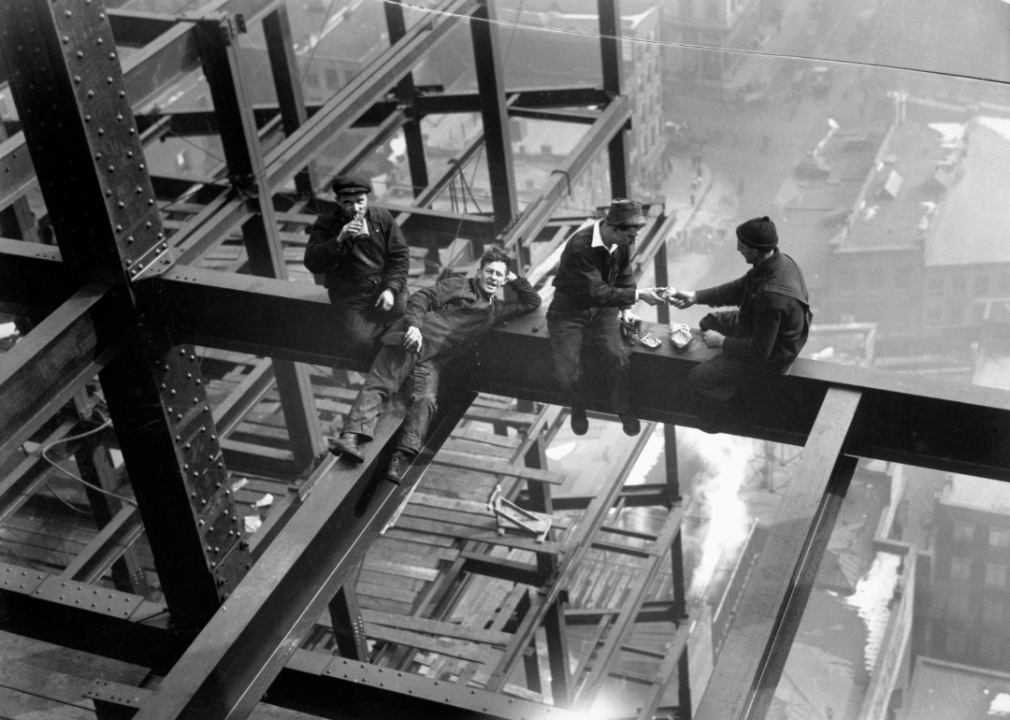 The late 1920s ushered in a skyscraper construction spree. As the city’s population boomed, more space was needed for apartments and offices. Here, several workers take a break, stories above street level, while working on a Vesey Street tower. 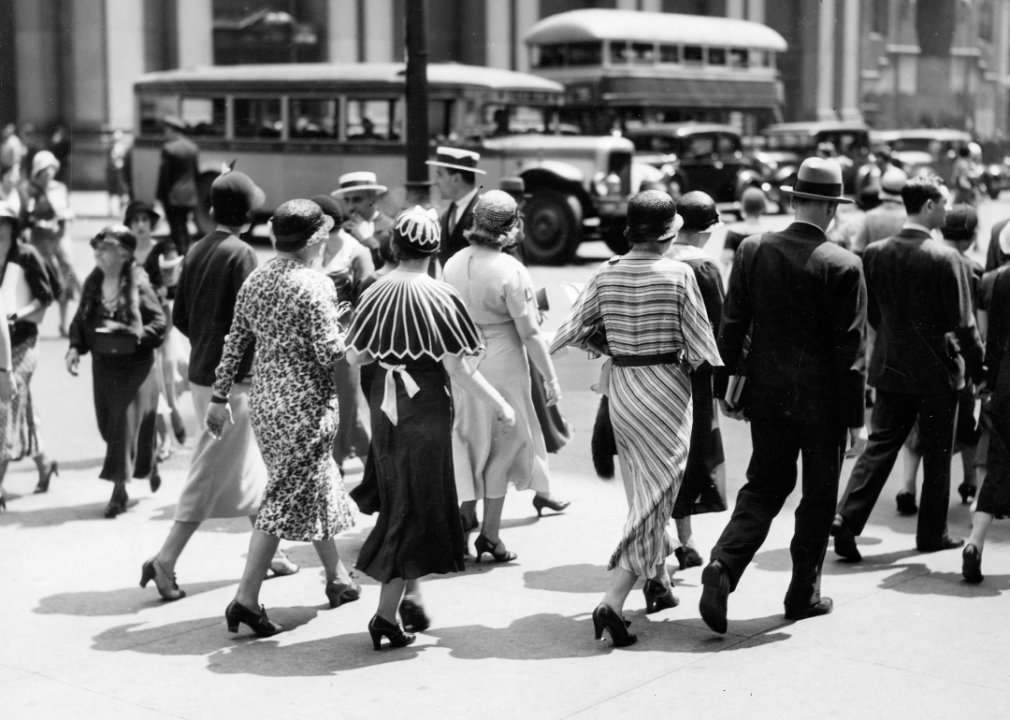 Shop til you drop

In the late 1800s, Herald Square (located in Midtown Manhattan along 34th Street) was known for the various newspaper headquarters that were scattered around it. But by the 1920s, those newspaper buildings were gone, replaced by some of the city’s biggest department stores—Macy’s, Gimbels, B. Altman & Co.—making it one of the city’s premier shopping destinations. 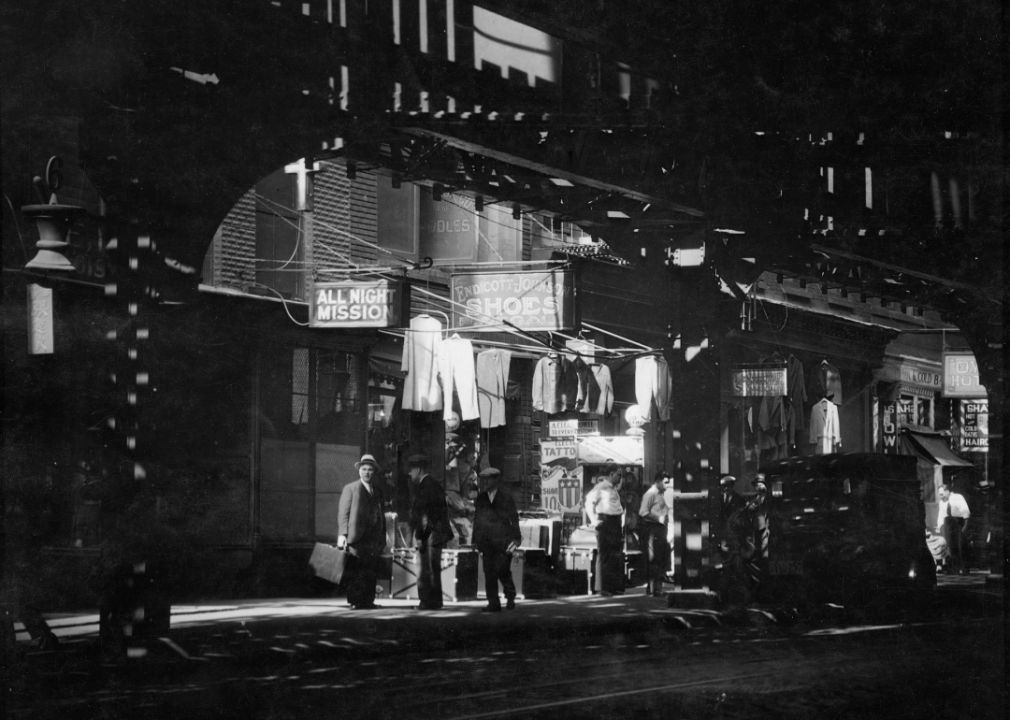 New York City’s oldest street, best known for its “skid row” reputation, was packed with speak-easies during the 1920s. With prohibition in full swing, bars offering a cocktail called Smoke (a mixture of water and fuel alcohol that cost just 15 cents) were crammed in the back of ordinary shops and frequented by the area’s most shady characters. 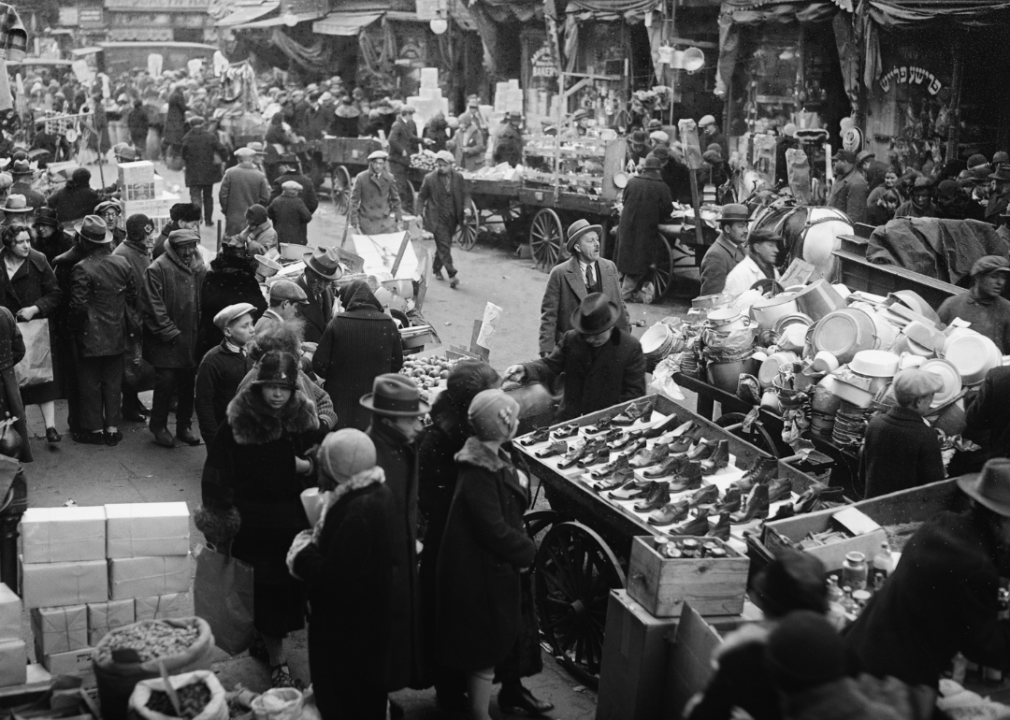 Many of the immigrants who settled in the Lower East Side were unable to find jobs in line with the ones they had held in their native countries, so they turned to pushcarts. In the late 19th and early 20th centuries, you could buy anything—from food to eyeglasses to dishes—from the hundreds of pushcarts that lined the neighborhood’s streets. Here, Jewish New Yorkers peruse the wares as they prepare for Passover. 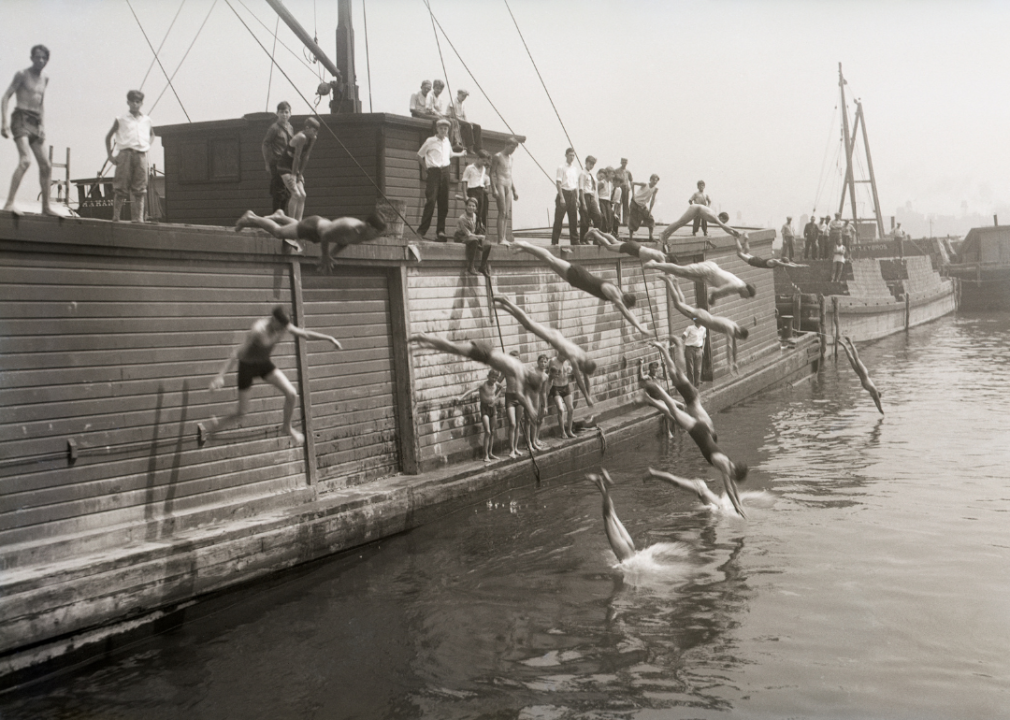 Due to pollution and litter, today’s New Yorkers would never think to take a swim in the dirty East River. However, 100 years ago, the river’s chilly, mostly clean water was the perfect remedy on a 100-degree day. 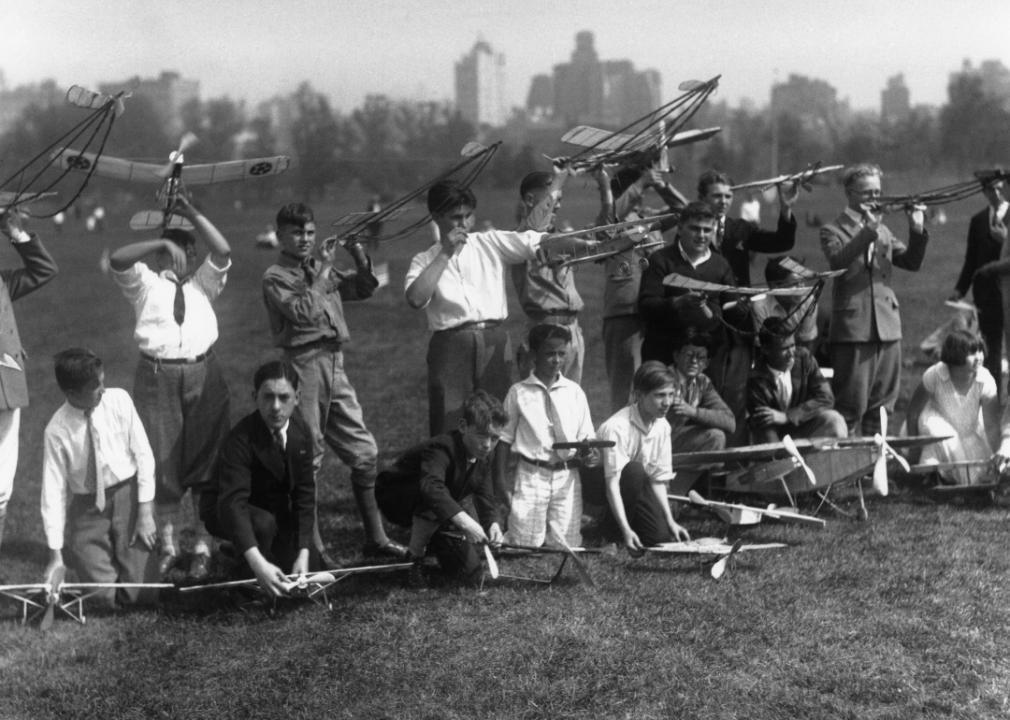 In 1927, Charles Lindbergh left New York City in his plane, the Spirit of St. Louis, to attempt to become the first man to make a solo flight across the Atlantic Ocean. His departure and successful arrival in Paris were celebrated far and wide, including by these young men in Central Park who competed in a rubber band airplane derby. 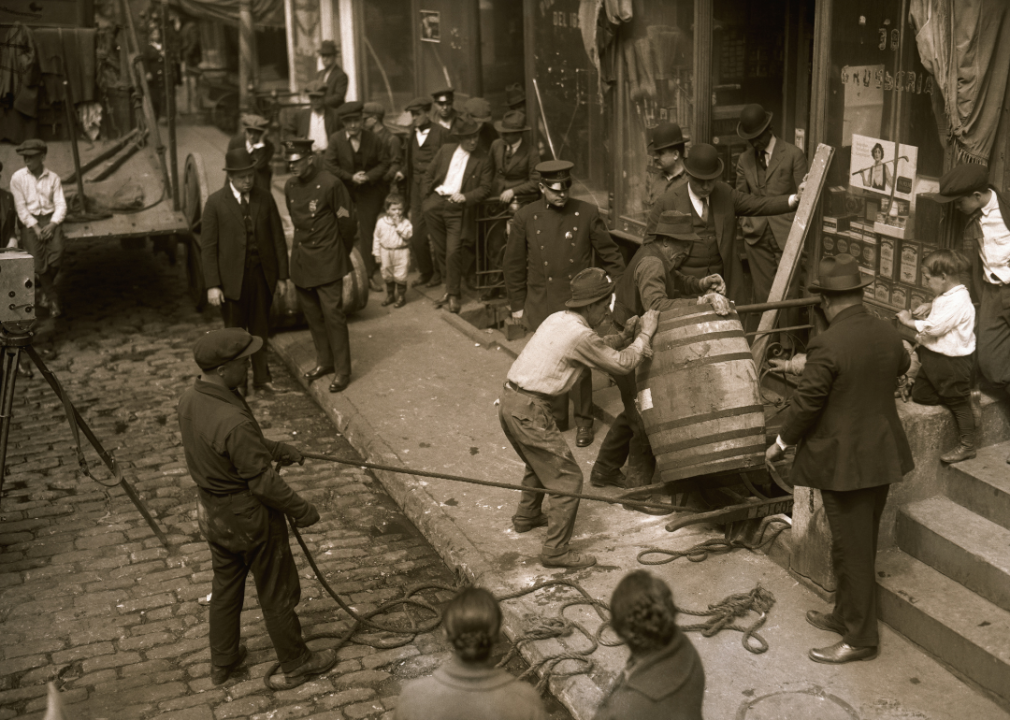 New York City treated Prohibition like a mere suggestion rather than a hard-and-fast law. While the city shut down its various bars and champagne rooms, an equal or greater number of speak-easies popped up in back rooms and down back alleyways. Occasionally, these underground spots would be raided (as pictured here), with the city claiming possession of the illegal wine and spirits. 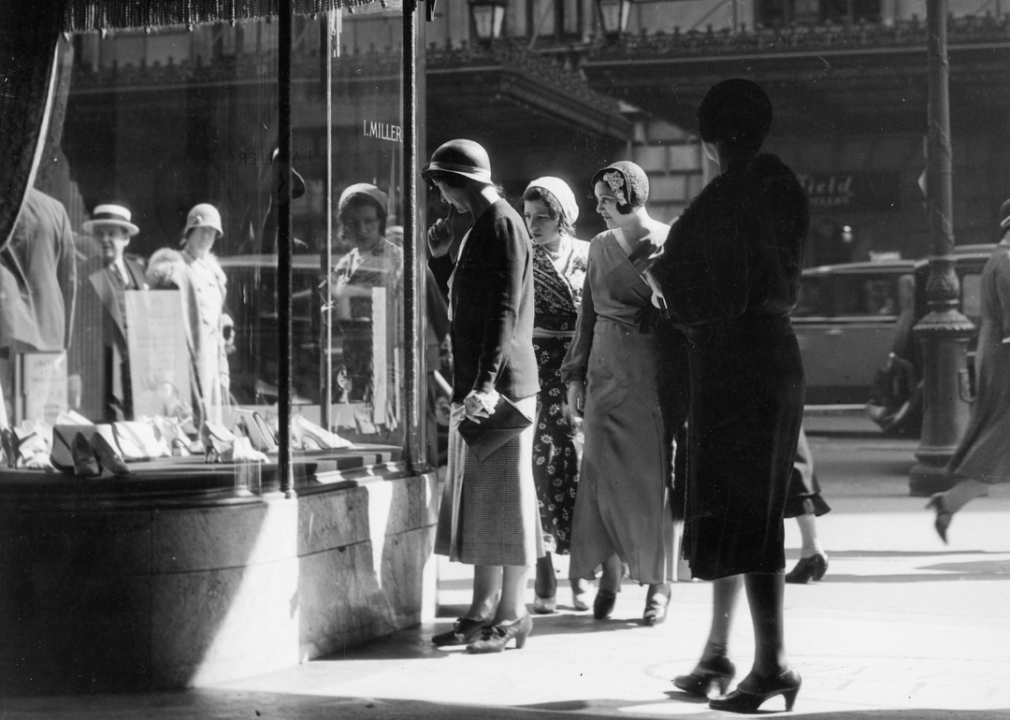 Millions of people flock to New York City desperate to make their dreams come true. Israel Miller—the Prussian immigrant behind I. Miller & Sons (a shoe company worth $8 million in 1929)—was one of the lucky few who succeeded. Above, several women lust after his footwear in the window of a retail shop near Grand Central Station. 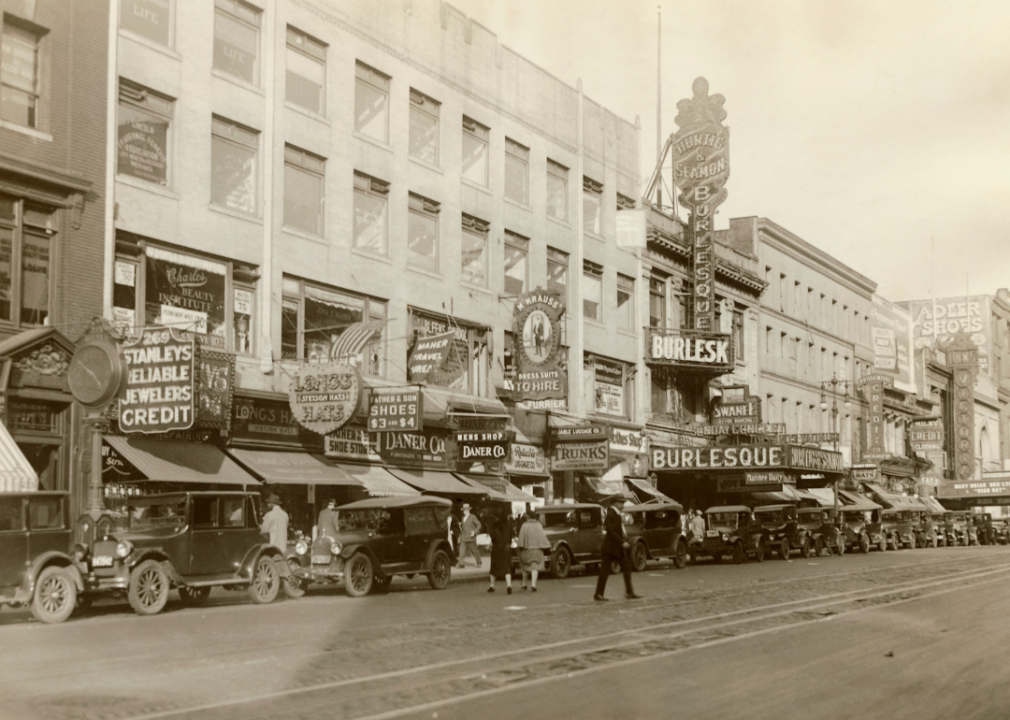 When it first opened in 1913, Harlem’s Apollo Theater was named Hurtig & Seamon’s Music Hall. Shown here with its original name and marquee, the famed theater hosted burlesque shows throughout the 1920s and wouldn’t become a hot spot for Black musicians and performers until the early 1930s. 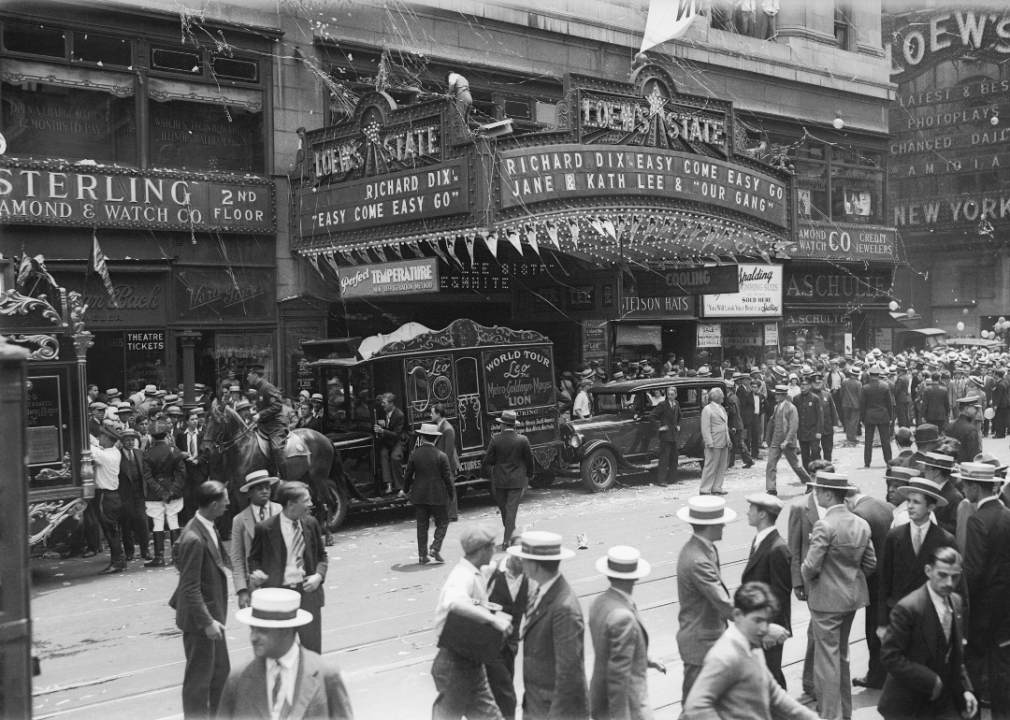 A massive movie palace, Loew’s State Theater opened up in Times Square in 1921. Here, moviegoers flock around the theater’s front entrance, hoping to get a glimpse of Leo, the MGM lion.

The Cotton Club—Harlem’s premier nightclub during the 1920s and the launching pad for dozens of the era’s greatest Black performers—opened its doors in 1923. Although nearly all of its performers and staff were Black, the club initially only admitted white patrons. 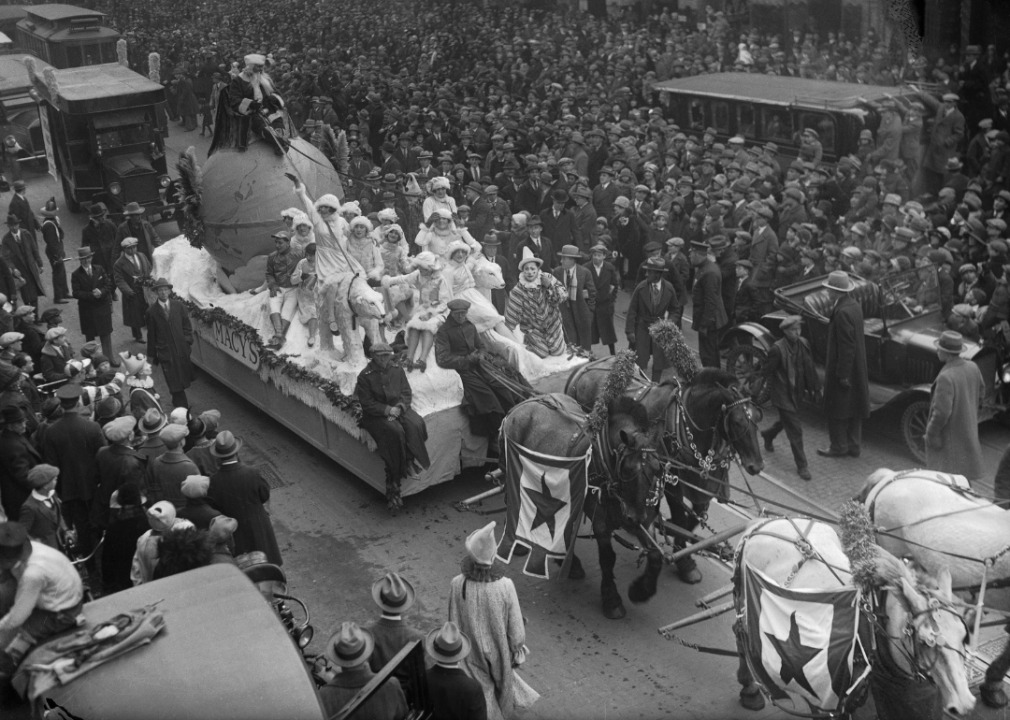 Now considered a staple as essential as the turkey and mashed potatoes, Macy’s Thanksgiving Day Parade isn’t actually as old as the holiday itself. The department store sponsored the first event back in 1924, and it has run (nearly) every year since. Here, Santa Claus closes the festivities, ringing in the Christmas season just as he does today.