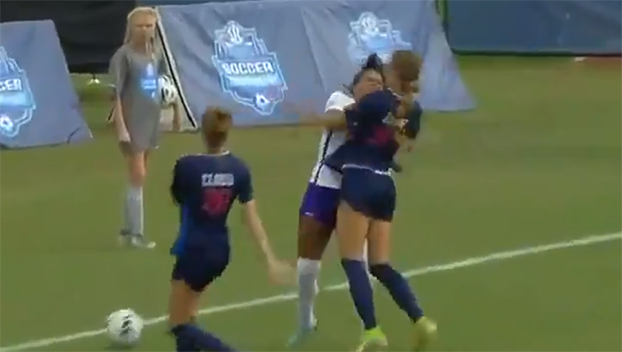 A tense soccer match turned into a brawl with punches and hair-pulling in the first round of the SEC Women’s Soccer Tournament between the teams of Ole Miss and LSU.The match was in double overtime when LSU’s Maya Gordon and Ole Miss’ Ramsey Davis, who were both fighting for the ball, started fighting each other.

Gordon took issue with Davis grabbing her by the waist in defense and then shoved Davis. Then punches started to fly.

Gordon and Davis threw a series of punches.

As referees, players and coaches were trying to control the situation, LSU’s Rammie Noel seemed to sprint across the field and then pull Davis to the ground by her hair.

Coaches soon restored order to the chaotic situation, but not without all three players involved — Gordon, Davis and Noel — receiving red cards and being ejected from the game.
In the end, the Tigers lost the match 3-0. All three players have reportedly received one-game suspensions.