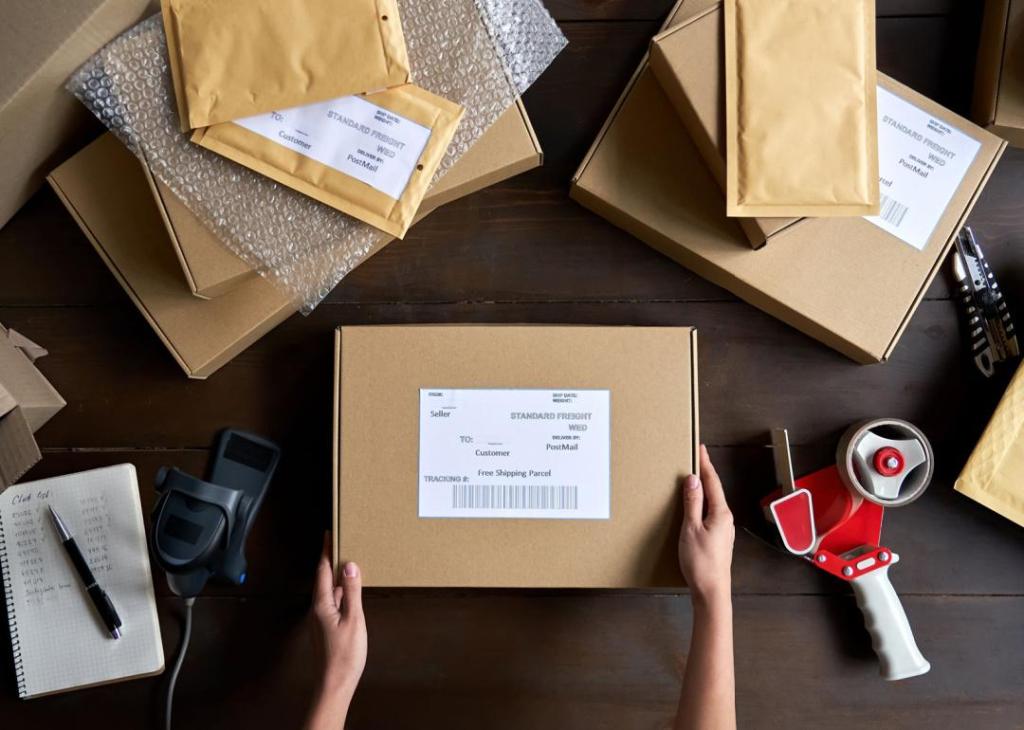 The volume of online shopping done by Americans has skyrocketed in recent years, fueled by a global pandemic and technological advancements. But it hasn’t always looked this way for the e-commerce sector.

Online retail is actually a relatively new form of doing business and the Census Bureau only began tracking the industry segment in a standardized format this year.

The first true e-commerce company goes back to 1969, but it looked a lot different than the click-to-buy, frictionless convenience we know today. Named CompuServe, the company was the oldest of the early internet service providers (another was America Online, which acquired CompuServe in 1998). Through the ’80s and ’90s, CompuServe provided dial-up internet service along with software, games, and a chat service to customers for a fee of around $9 per month (or about $20 per month in today’s dollars).

By the summer of 1995, Jeff Bezos had launched a service for buying books over the internet. In its first 30 days of operation, the company made sales in 50 states and 45 countries. And thus, Amazon was born. That same year an online auction site named eBay was founded and became almost immediately profitable.

CompuServe required a manual that could be purchased separately to get the most out of the service. But with Amazon and a new generation of emerging e-commerce platforms in the ’90s, the new technology ushered in convenience and user-friendliness to spur adoption.

Now, online shopping is as simple as a few taps on a smartphone, and it represents 14.5% of all retail sales. E-commerce retail sales hit about $960 billion in the U.S. in 2021 and this year, Americans are on track to exceed that with nearly $508 billion in sales through Q2 alone, according to U.S. Census Bureau data. American shoppers spend an estimated $2.85 billion online collectively each day.

To gain more insight into this online evolution, Ironplane compiled data from Census Bureau’s Annual Retail Trade Survey (ARTS) and the Quarterly E-Commerce Report subset to showcase how e-commerce has grown over the past two decades. (As a survey, all numbers provided by ARTS have a margin of sampling error.) Read on to learn how the evolution of the internet has changed the way humans shop. 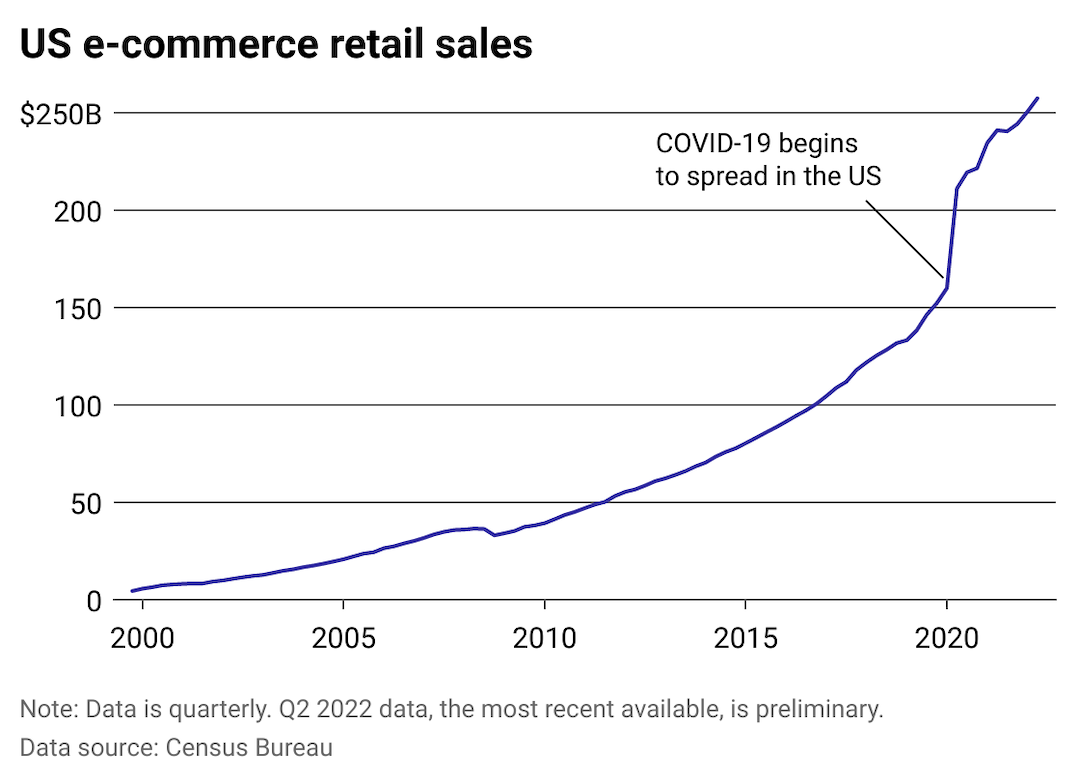 E-commerce retail had been increasing steadily prior to 2020

Before people headed online en masse due to social distancing and public health concerns,  e-commerce had already been experiencing rising sales. In the early 2000s, a flurry of traditional retail giants—including Walmart, Costco, and Safeway—launched websites for online sales, spurred by a healthy fear of Amazon’s early dominance. And despite a dip in sales during the Great Recession, e-commerce activity increased each year at a relatively steady pace.

Throughout the 2010s, retailers pared down brick-and-mortar store locations while investing in fulfillment services and acquiring tech platforms to support e-commerce operations. In 2013, office supplies retailer Staples, for example, saw in-store shopping habits shift online to such an extent that its executives buckled down to “fundamentally reinvent” the company. This plan included shuttering hundreds of store locations. 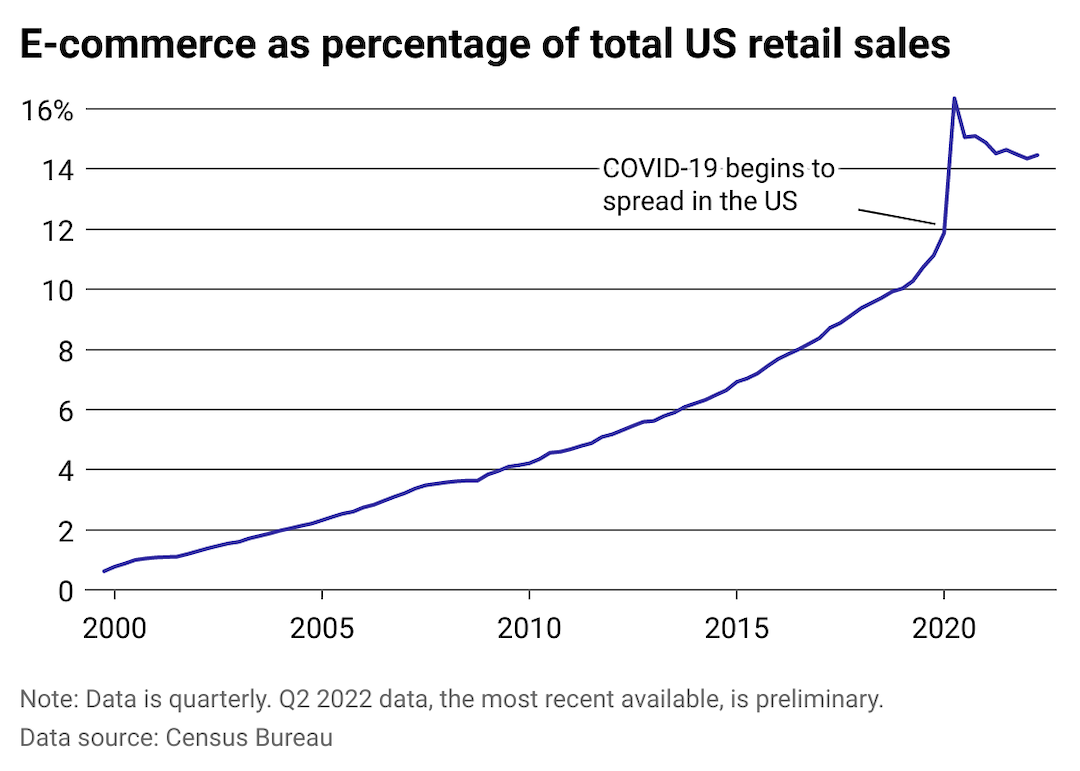 Roughly 3 in 20 retail purchases made in the U.S. are online. And for much of the last two decades, online shopping has seen its share of the market grow steadily. Until the pandemic arrived, that is.

The onset of the COVID-19 pandemic caused Americans to desert public spaces—an act that supercharged online shopping in 2020. While some retail executives and industry analysts predicted that the trend toward online shopping was here to stay, online sales began to dip by fall 2020, showing that the trend wasn’t as sticky as they may have believed. E-commerce’s portion of market share has dropped, though it’s still slightly higher than before the pandemic. 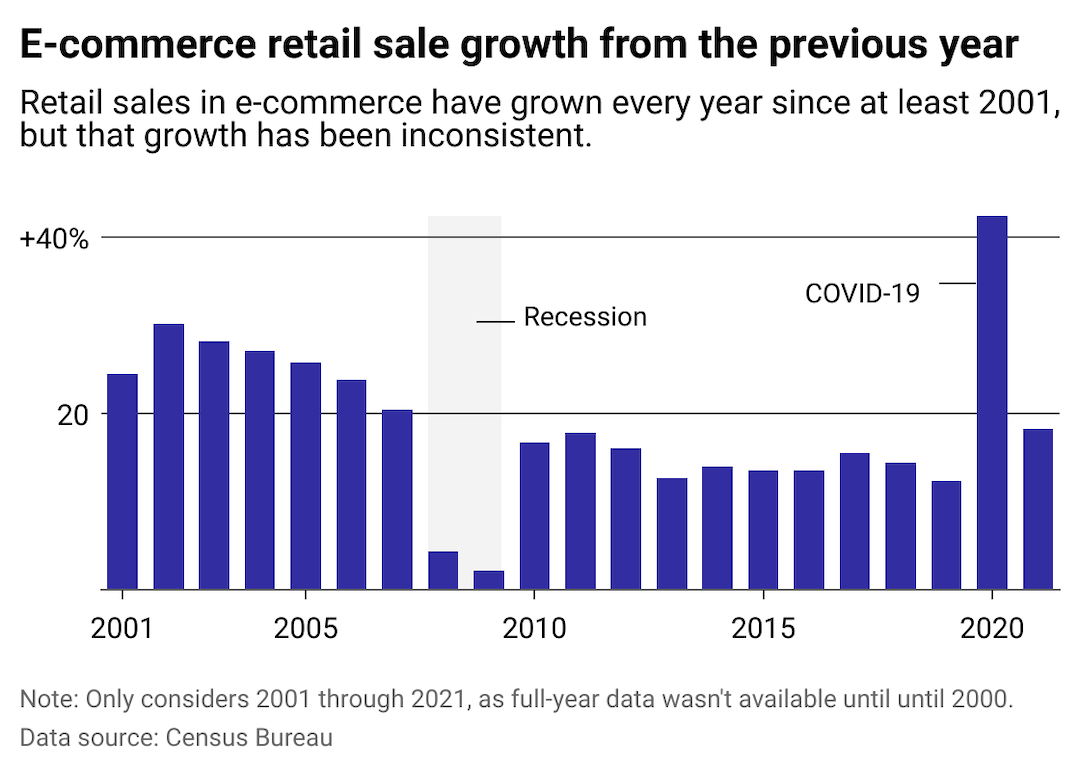 The first ever “Cyber Monday,” the online shopping holiday that falls the Monday after Thanksgiving, happened in 2005. But even the widespread popularity of the new holiday couldn’t match the boost the COVID-19 pandemic provided to e-commerce shopping growth when measured yearly. Growth tapered during the Great Recession as American households pulled back on spending, and began to recover in the 2010s, though it did not reach early industry growth levels until 2020. 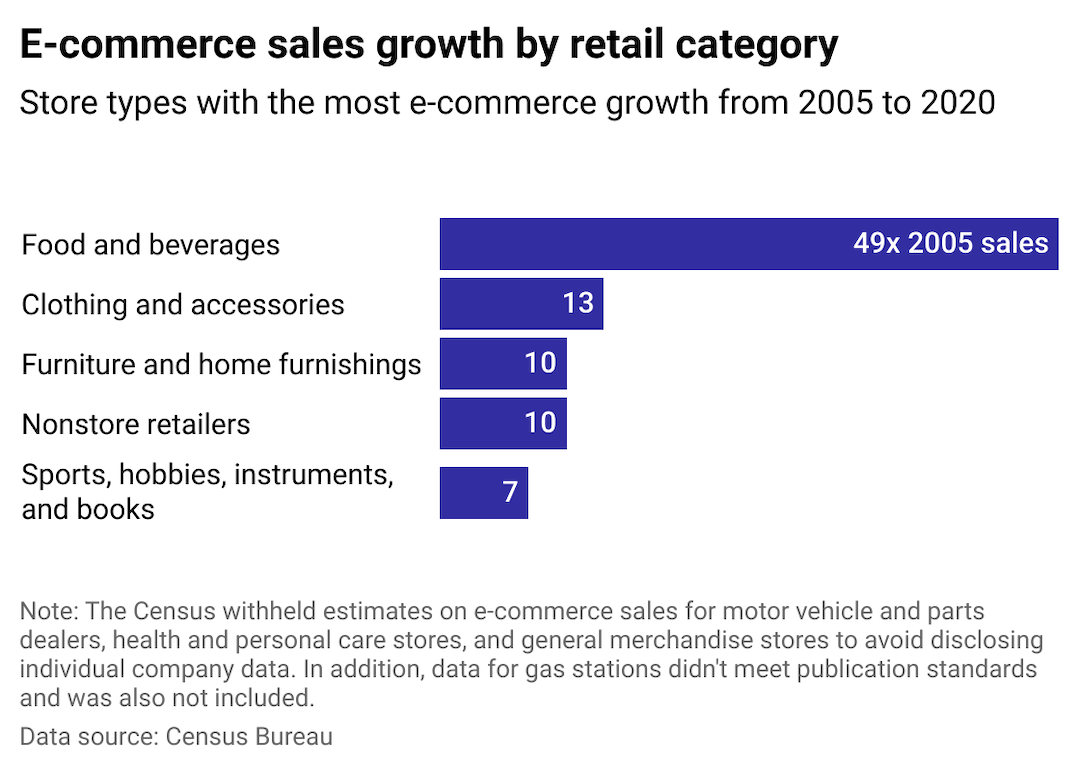 Online food and beverage sales, including grocery and restaurant delivery, have been the fastest-growing segment of ecommerce sales since 2005. Americans dropped $23 billion collectively on grocery and food delivery in 2020, up from $8.5 billion in 2019. Clothing and wearable accessories saw the next largest boost in 2020, bringing in $16 billion—up from $12.5 the previous year. With the combination of booming populations and the growing availability of internet-connected devices, the countries poised to see the most growth this year are Singapore, Indonesia, the Philippines, as well as India and Argentina.

According to eMarketer, Asian countries began to surpass the U.S. in 2016 for e-commerce growth, when China became the largest market for online shopping in the world. The research firm estimates that e-commerce sales will grow worldwide by 9.7% this year.

This story originally appeared on Ironplane and was produced and
distributed in partnership with Stacker Studio.