Robbers break into ATM at small town Mississippi bank, make away with unknown amount of money. 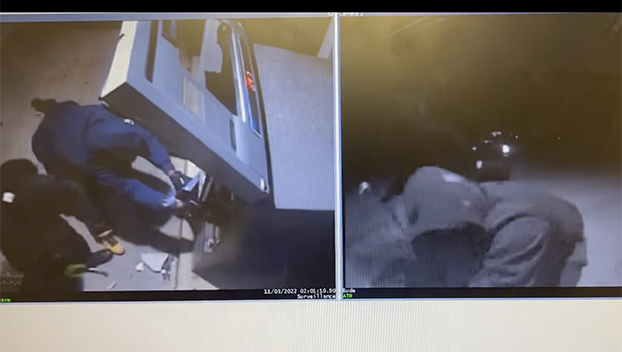 Police are looking for two suspects who made away with an unknown amount of cash from an ATM they broke into from a small town Mississippi bank.

The Bude Police Department released a video from a surveillance camera recording the break-in on Thursday.

The incident happened at approximately 2:10 a.m. on Nov.3, when a call to 911 emergency services was received by the Franklin County Sheriff’s Department in reference to an “ATM” alarm going off.

The suspects were driving a black in colored Dodge Ram with no tag Information displayed.

The suspects were able to get away from the scene with an unknown amount of U.S. Currency.

If anyone has any information regarding this matter please contact The Bude Police Department or The Franklin Sheriff’s Office at the numbers below.