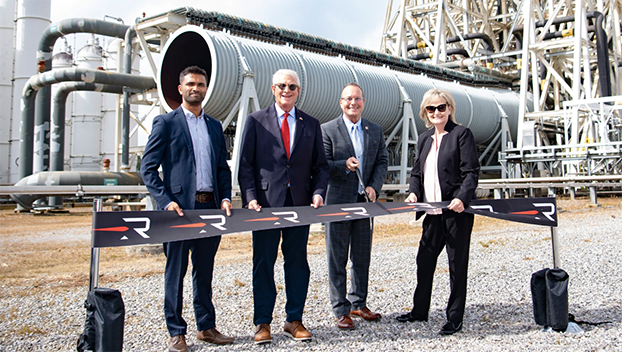 NASA’s Stennis Space Center and Rocket Lab USA cut the ribbon Nov. 4 on a new agreement for the aerospace company to locate its engine test complex at the rocket propulsion site near Bay St. Louis, Mississippi.

NASA, Rocket Lab, and key elected officials gathered in the Stennis Test Complex for an official ribbon-cutting ceremony to mark the launch of the new 10-year agreement. Rocket Lab expects to make a substantial capital investment in the project in upcoming years and also create dozens of jobs for the surrounding area.

“We are pleased that Rocket Lab selected Stennis Space Center for development of its new test complex,” Stennis Space Center Director Rick Gilbrech said. “With finalization of this agreement, we look forward to working with Rocket Lab as it develops and moves forward in achieving its space goals. This represents an exciting opportunity not only for Stennis but also for the Gulf Coast region and the entire state of Mississippi.”

With the new agreement, the A-3 Test Stand and about 24 surrounding acres at Stennis will be incorporated into the Archimedes Test Complex. Archimedes is Rocket Lab’s new liquid oxygen and liquid methane rocket engine that will power its large, reusable Neutron rocket.

Rocket Lab will have exclusive access to use and develop the A-3 Test Stand area, including associated propellant barge docks and buildings. The initial 10-year agreement includes an option to extend an additional 10 years.

The Mississippi Development Authority is providing assistance for Rocket Lab to develop the new site and to relocate and install needed equipment.

“It was only a few weeks ago when we announced Stennis as the location of our Archimedes Test Complex and we’re already fast at work to get the site up and running to deliver Neutron,” said Peter Beck, founder and CEO of Rocket Lab. “Thanks to our partnership with NASA and the state of Mississippi, we can begin to develop the existing infrastructure and test stand at Stennis to fast-track Neutron’s first launch. We look forward to breathing fire in the great state of Mississippi.”

Rocket Lab, founded in 2006, is headquartered in Long Beach, California. It already builds and flies Electron rockets for small satellite launches. Its new Neutron rocket is designed as the world’s first carbon-composite rocket to deliver large spacecraft to low-Earth orbit and to support a sustained human presence in space. It will be powered by Rocket Lab’s reusable Archimedes engines and an advanced upper stage for complex satellite deployments.

“This agreement with Rocket Lab is part of an ongoing process to attract space companies to Stennis and create economic opportunities for the region, said Duane Armstrong, manager of the Stennis Strategic Business Development Office. “The partnership and the infrastructure already in place at Stennis will dramatically reduce the time it takes Rocket Lab to develop their new engines and create this new launch vehicle, which will provide services to NASA, other parts of the federal government, and industry.”