The ACT vs. SAT: Battle of the standardized tests 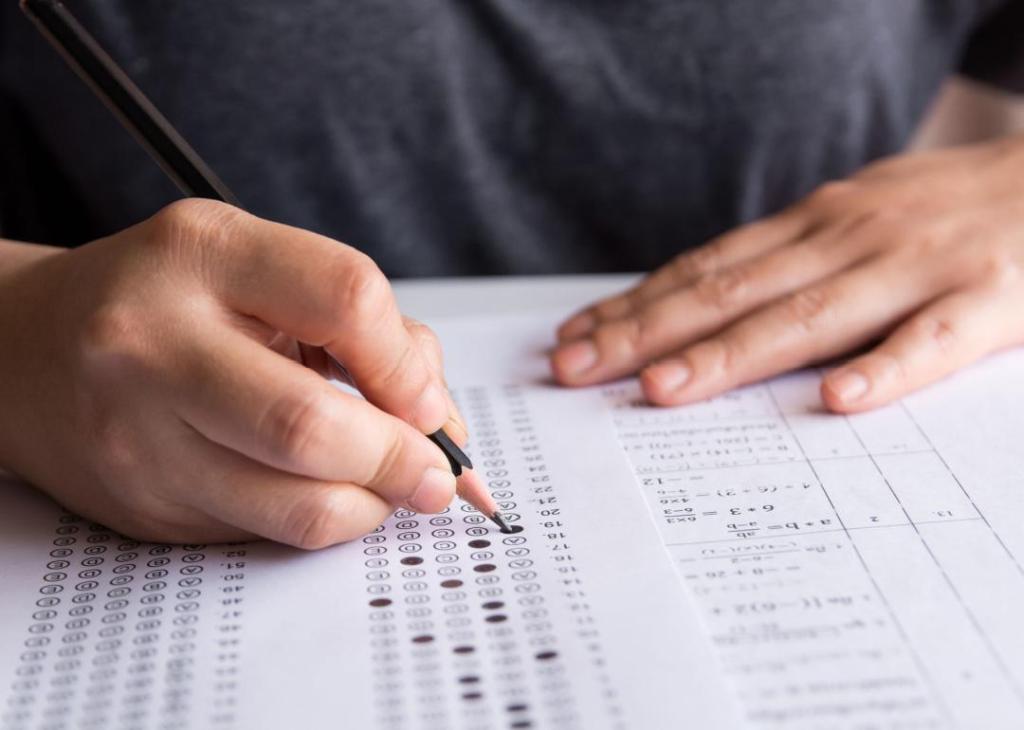 The ACT vs. SAT: Battle of the standardized tests

College admission tests are under increased scrutiny, with some critics alleging that the standardized tests disadvantage underrepresented and low-income students. These allegations, along with fewer students taking the tests during the coronavirus pandemic, have questioned the overall value of such exams as the SAT and ACT.

Best Universities looked at ACT and College Board data to compare test trends, including how many students have taken the tests over time and their typical scores. Data looks at test-takers by each graduating class.

The SAT dates back to 1926, while the ACT was introduced in 1959 as a competitor that more closely corresponded to material learned in school. The pandemic dealt a blow to test scores for both, with the Class of 2022’s average ACT composite score hovering at 19.8—a 30-year low. Higher scores have long correlated with wealthier school districts and access to tutors, leading to accusations of inequality and calls for change.

FairTest, the National Center for Fair & Open Testing, claims that the SAT and ACT exams leave women, low-income students, and underrepresented communities at a disadvantage. A 2020 Brookings Institution investigation of SAT math scores by race argued that the test reinforces race gaps in college admissions instead of increasing racial diversity.

Since the coronavirus pandemic began, fewer students have taken the tests and more schools have made them optional or dropped them altogether. The total now, according to FairTest, is more than 1,700 schools for which the tests are optional and 80 that are test-free. 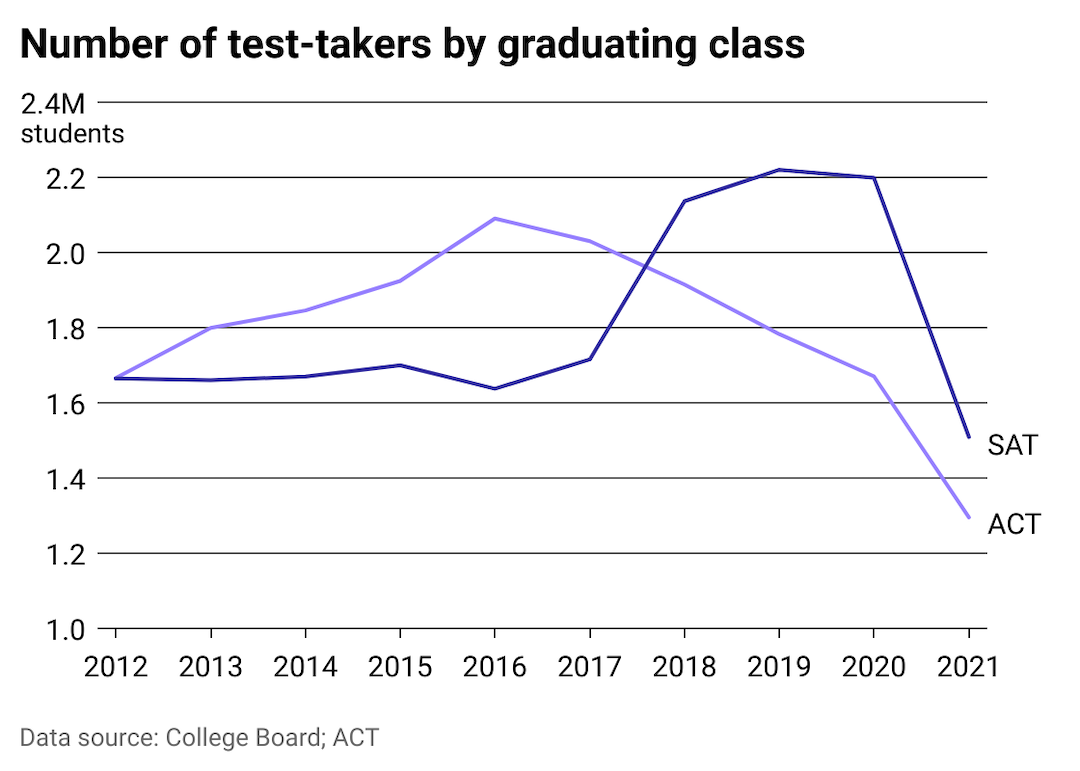 The ACT and SAT scores have traditionally been a requirement for college applications. While they are not the sole factor used to determine whom to admit or offer scholarships, they are part of the student’s overall academic profile—which includes grades, extracurricular activities, and other achievements—that will be evaluated by college admissions officers.

The tests are equally difficult, although students may perform better on one test over the other, according to the Princeton Review. Both tests have sections on reading, math, and either writing and language or English, but the ACT includes another on science reasoning and an optional essay that adds 40 minutes to the test. The ACT allows calculators for all math questions, while the SAT has one math section that does not.

Originally intended as an IQ test for U.S. Army recruits during World War I, the SAT was adapted as a college admission test that currently operates on a scale of 400 to 1600. Introduced in 1959 as a competitor to the SAT, the ACT is scored on a 1 to 36 scale and tests for material learned in school. 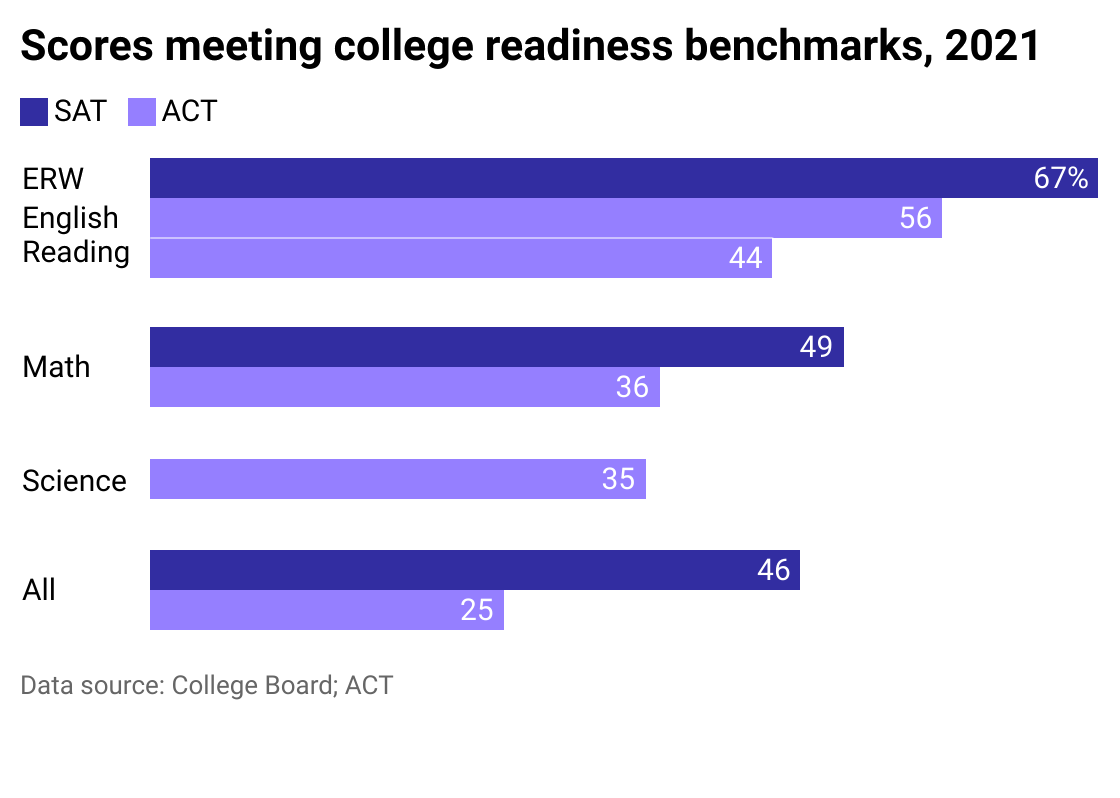 The ACT became more popular than the SAT for the first time in 2012. At the time, Bob Schaeffer, public education director of FairTest, told the Washington Post that students saw the ACT as more “consumer-friendly.” Unlike the SATs, there were no deductions for wrong answers, the essay was optional, students could drop a bad score, and the material was more familiar. The SAT introduced the essay in 2005 but made it optional in 2016.

When the coronavirus pandemic forced testing sites to close in 2020, hundreds of colleges and universities waived testing requirements. In response, the SAT discontinued the essay section and subject tests the following year. The number of students taking the ACT in 2021 fell by more than 375,000 in 2020 to about 1.3 million; the SAT lost about 700,000 in the same year, dropping to about 1.5 million. 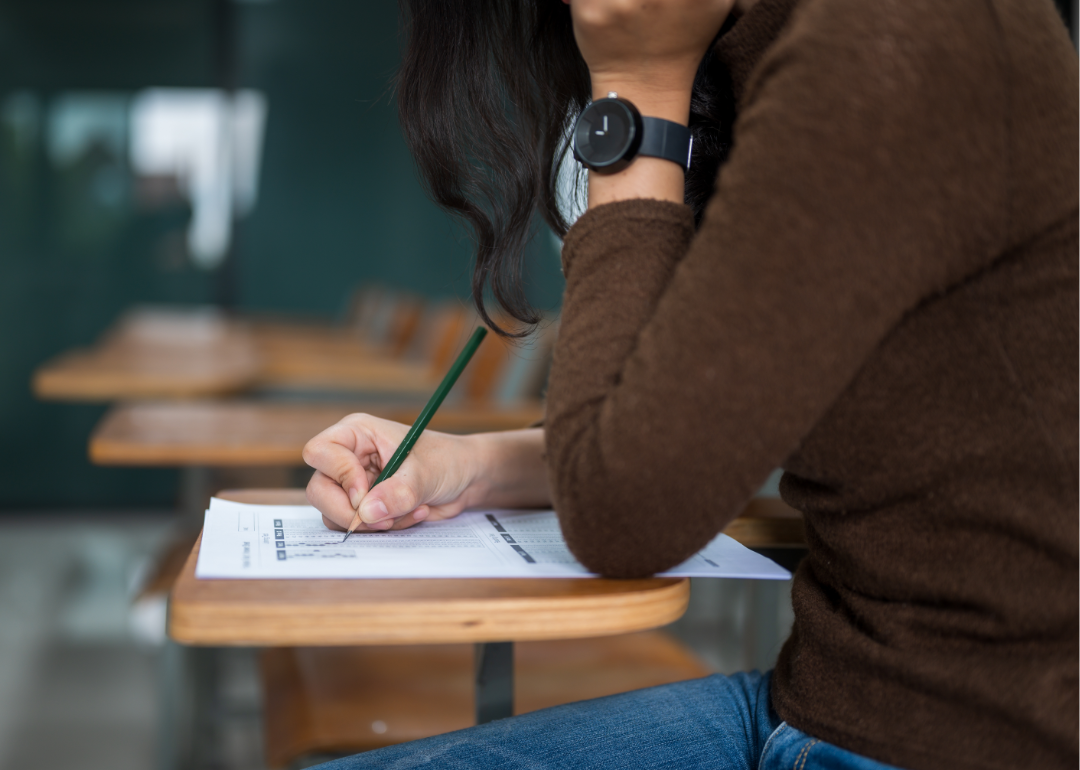 Among SAT test-takers in the class of 2021, less than half met or exceeded the reading, writing, and math college readiness benchmarks, according to the College Board. The benchmarks are the minimums scores that indicate whether students are likely to succeed in college-level courses. The College Board claims that because the number of students taking the test varied so widely because of the pandemic, it was impossible to compare results among classes.

Only 1 in 4 high school students who took the ACT met all four college readiness benchmarks, and nearly 2 in 5 met none. The national average composite score for the class of 2022 was 19.8, the lowest in more than 30 years. These scores have been falling since 2016, predating any pandemic-driven challenges, according to the National Center of Education Statistics.