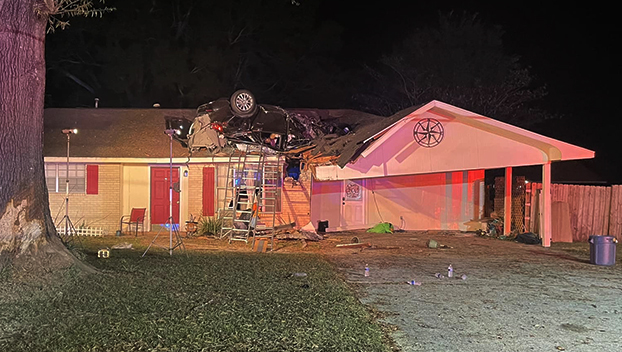 A woman was airlifted to the hospital after she was rescued from her vehicle which landed on the roof of a Louisiana house after going airborne.

Shortly before 5:30 p.m. Friday, emergency crews from the Zachary Fire Department responded to a caller who reported a vehicle on top of a house roof on Rita Street.

Upon arrival, crews found a single vehicle on the roof, with part of the vehicle protruding into the attic of the house.

Crews worked diligently to locate a trapped occupant and safely extricated the driver, who was airlifted to a local hospital. Officials say the woman was conscious after being rescued. Her condition at this time is unknown.

Officials believe the driver crashed into a ditch and a tree before her car went airborne and struck the home, crashing through the attic.

Police said two children, a 13-year-old and an 8-year-old, were inside the house at the time and were not hurt.