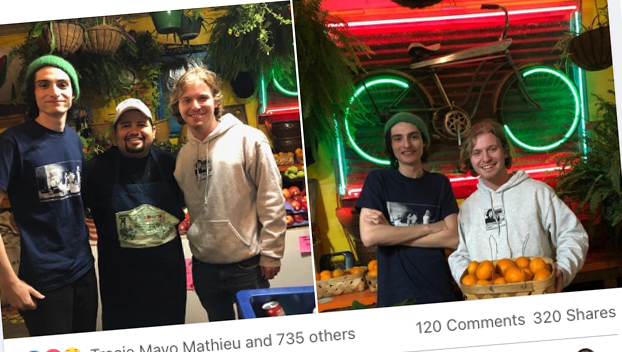 One Mississippi restaurant received a great deal of attention Monday when two Netflix stars walked in the door.

Finn Wolfhard, one of the stars of the wildly popular Netflix series “Stranger Things,” and Fred Hechinger, a star of  “The Fear Street Trilogy” of horror films on the same streaming service, visited The Tomato Place in Vicksburg.

The restaurant on U.S. 61 south of Vicksburg posted about the visit by the two actors.

By Tuesday morning, the post had received more than 300 shares and more than 100 comments.

The post included pictures of the two actors, but did not mention any details of their trip.

According to Wikipedia, Wolfhard is a Canadian actor and musician and plays Mike Wheeler in the Netflix series “Stranger Things.” His has also acted in the film adaptation of Stephen King’s horror novel “It” (2017) and its sequel “It: Chapter Two” (2019), in the drama film “The Goldfinch” (2019). Wolfard is the voice of Pugsley Addams in “The Addams Family” (2019), and Trevor in the supernatural film “Ghostbusters: Afterlife” (2021).

Hechinger is an American actor. He is best known for playing Trevor in the coming-of-age film “Eighth Grade,” acting in the Western drama “News of the World,” and in the psychological thriller “The Woman in the Window.”