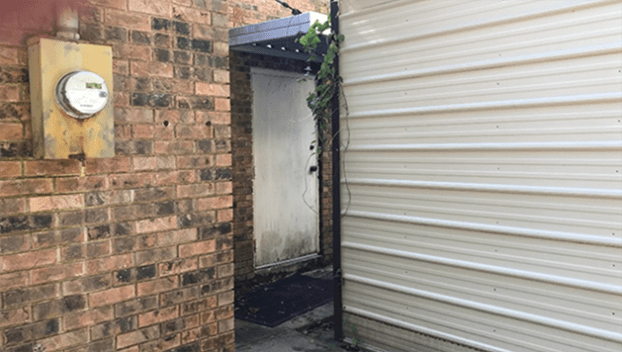 Back door at proposed Toke and Tell dispensary in Natchez.

A Mississippi owner of a medical dispensary has had to go through the back door  — literally — to meet local and state regulations. Plans to use the back door, despite objections from the local building inspector and fire marshal, have proven to be controversial.

Tina Bruce, who owns Bruce Professional Counseling Services, operates one of her multiple offices at 55 Seargent Prentiss Drive Suite 102. That location is where the state and the city’s planning commission have approved Bruce to operate her Toke and Tell medical marijuana dispensary.

However, that approval allows Bruce to only use the back door of her office as its main entrance.

The front door of Bruce’s office is within 1,500 feet of Tabitha Wroten’s The Highest Care dispensary, which will locate at 131 Jeff Davis Blvd, Suite D.

State law requires medical marijuana dispensaries to locate at least 1,500 feet apart from each other.

Liz Hicks Blaney, who manages 55 Seargent Prentiss Drive Suite 104 in the Trace Town Shopping Center in which her late father’s medical practice was once located, said she has no problem with medical marijuana.

However, she does have a problem with someone in the complex where the building is located selling medical marijuana or anything else and using the back entrance of the building to do so.

Doris Kumi, whose husband is Natchez obstetrician and gynecologist Kofi Kumi, said they own suites 100 and 101 55 Seargent Prentiss, as well as the driveway leading to the back of the building, starting at suite 104.

“I will not grant an access point to her back door,” for her customers, Mrs. Kumi said via text message on Tuesday afternoon.

“I grant easements as a courtesy to the tenants…I don’t think this site will be the best site for the medical marijuana dispensary,” Mrs. Kumi said. “The liability issues besides, my husband is an ob/gyn and is always going in and out of the office to the hospital when he’s called for a delivery or an emergency. He has got to go. He has no time for clearing people or objects out of his way.”

On Oct. 23, the city’s planning commission gave its approval to Bruce’s application, which requires her to use the back entrance as her main entrance, despite the fact that the city’s fire chief, fire marshal and building inspector recommended against it. In fact, City Planner Frankie Legaux recommended to the planning commission that they table the application until they could get additional information.

The front door of Bruce’s office, is within that 1,500 feet, but the back door is not, Legaux said.

Legaux said at the advice of the city attorney, the planning commission hired Jordan Kaiser Session to do a survey of the distance between the two locations. The city paid for that survey, she said.

The state and city ordinance also requires that dispensaries locate at least 1,000 feet from any church, school or day care center. In Bruce’s situation, her proposed Toke and Tell location is less than 1,000 feet from the First Lutheran Church at 70 Seargent Prentiss Drive.

“At the state level, you can get an exception if the church has no problem with it,” Legaux said. “Bruce had the minister at First Lutheran sign a notarized statement agreeing to the location.”

Further, the city’s fire chief, fire marshal and the building inspector each recommended that the planning commission not allow the use of the back door at the entrance of Toke and Tell.

Each wrote the use of the back door posed a safety hazard because of the lack of room in the back of the facility. It’s a tight space that backs up to a concrete wall.

“I had my reservations about access to the building, based strictly on fire emergency protocols,” said Natchez Fire Chief Robert Arrington. “However, the state approved it and that’s where it lays.”

“We approved it, but it could have been turned down by the state. From what I understand the state Alcohol, Tobacco and Firearms do a site visit,” Legaux said.

She said those in the area of the location were notified about a public hearing on the issue, but no one attended.

“Nobody objected to it. Not even the church,” Legaux said.

Blaney said she never received a notification about the public hearing on the medical marijuana dispensary. That notification apparently went to the person who leases her building.

“Each building has two spaces in the back. Where are these people going to park? There is no public parking back there,” Blaney said. “It’s ridiculous.”

Attorney Anthony Heidelberg, whose law office occupies a building at 55 Seargent Prentiss, said he has no problem with Bruce using the back door as an entrance for her dispensary.

“I don’t have a problem because it’s medical marijuana. It’s not going to be used for recreational purposes. That would be different. These people will have prescriptions for the marijuana,” Heidelberg said.

He said Bruce plans to construct a sidewalk around the building to the back to guide people to the entrance of the dispensary.