12 truly spectacular pools from around the world 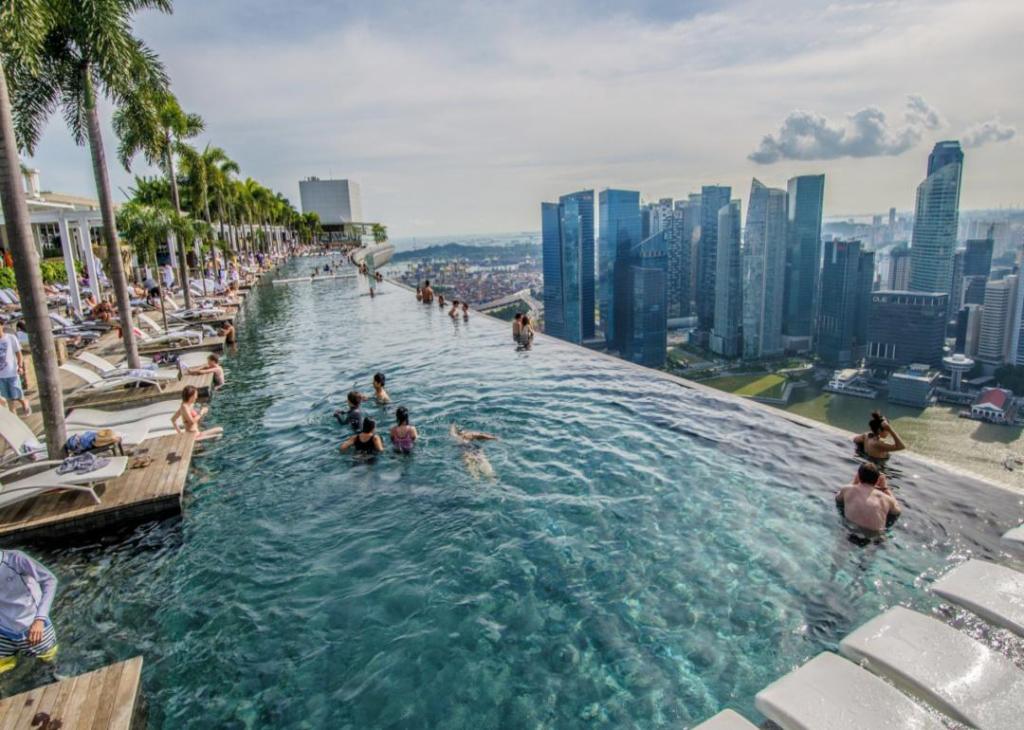 12 truly spectacular pools from around the world

The past couple of years has been a whirlwind as people dealt with the COVID-19 pandemic, civil unrest, significant political changes, skyrocketing inflation costs, and global supply chain shortages. The constant stress is enough for many to daydream of escaping and seeking refuge in spaces that ooze tranquility in deserts, mountains, or the water.

Spending time in coastal environments and being near water overall boosts mental health. A study published in the Interactive Journal of Medical Research found that outdoor swimming had positive health effects. In the survey, 95% of respondents with depression and 98.4% of those with anxiety reported reduced symptoms with consistent outdoor swimming.

Dolphin Pools reviewed pool locations around the world to determine some of the most gorgeous and picturesque spots to take a dip. Over the years, people have found ways to make this healthful activity even more pleasurable with innovations in pool design. Calm-seekers can gaze down on a cityscape from an infinity pool 57 stories high in Singapore, lounge in a bungalow steps away from the water in Thailand, or enjoy myriad options in between. 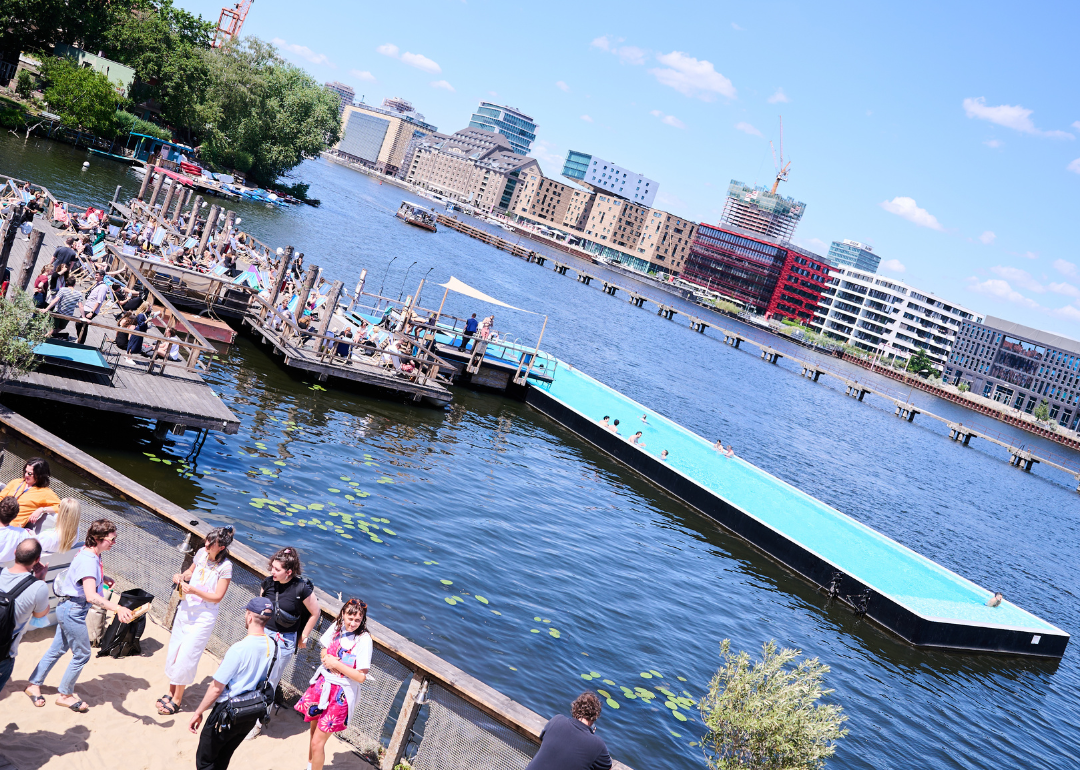 Soak in the city sights of Berlin while floating in a pool set within a cargo ship’s hull. The Badeschiff opened to the public in 2004 and was designed by Susanne Lorenz as part of a city arts competition. Set in the East Harbour region of the Spree river, Badeshiff (which translates to “bathing ship”) held water clean enough for people to swim in, rather than dipping into the heavily polluted waters of the Spree river.

The pool is closed during the winter. During the summer, visitors can partake in yoga, sports classes, and other activities in addition to using the pool. 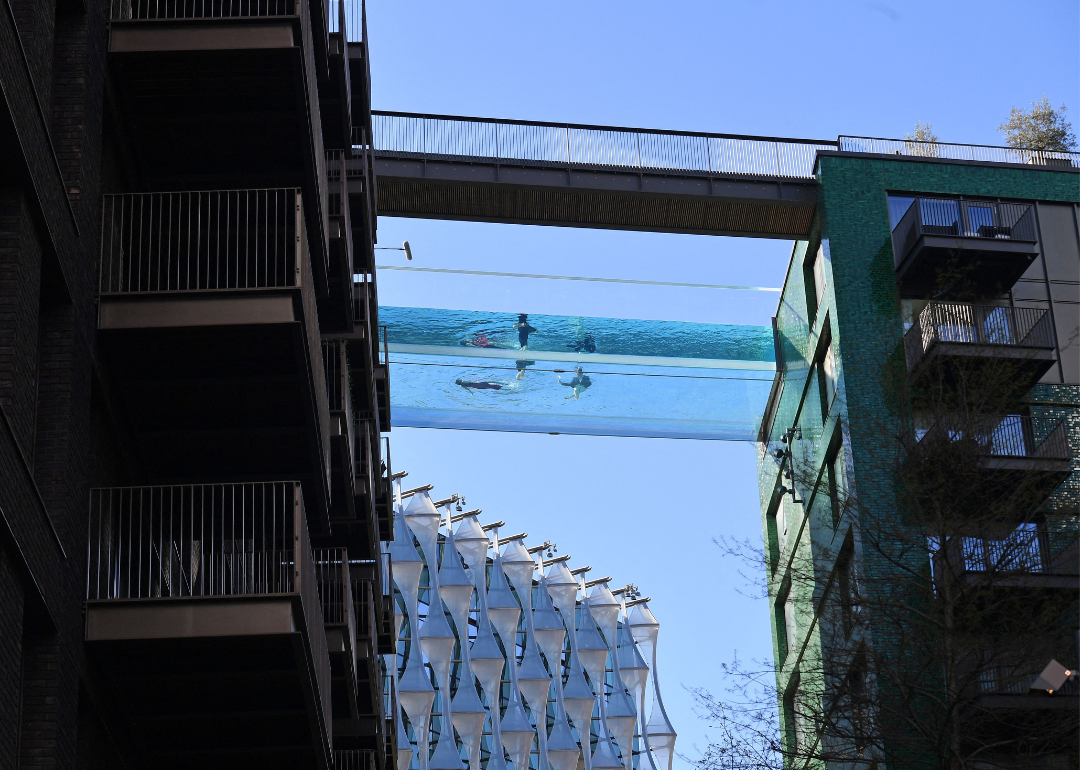 Why walk across a bridge when you can swim? The 49-foot (15-meter) clear pool that spans the 10th stories of two buildings is located in London’s Nine Elms region. The Sky Pool in Embassy Gardens is the world’s first transparent pool made of acrylic. Designed by architects Arup Associates and engineers Eckersley O’Callaghan, the 82-foot (25-meter) pool was fabricated in Colorado before being shipped to its current luxurious British digs.

The pool was unveiled in May 2021 but caused controversy because it wasn’t open to the affordable housing residents of the apartment complex, which is still true at the time of this writing. Residents have also called for the pool’s closure in the winter because of astronomical heating costs. 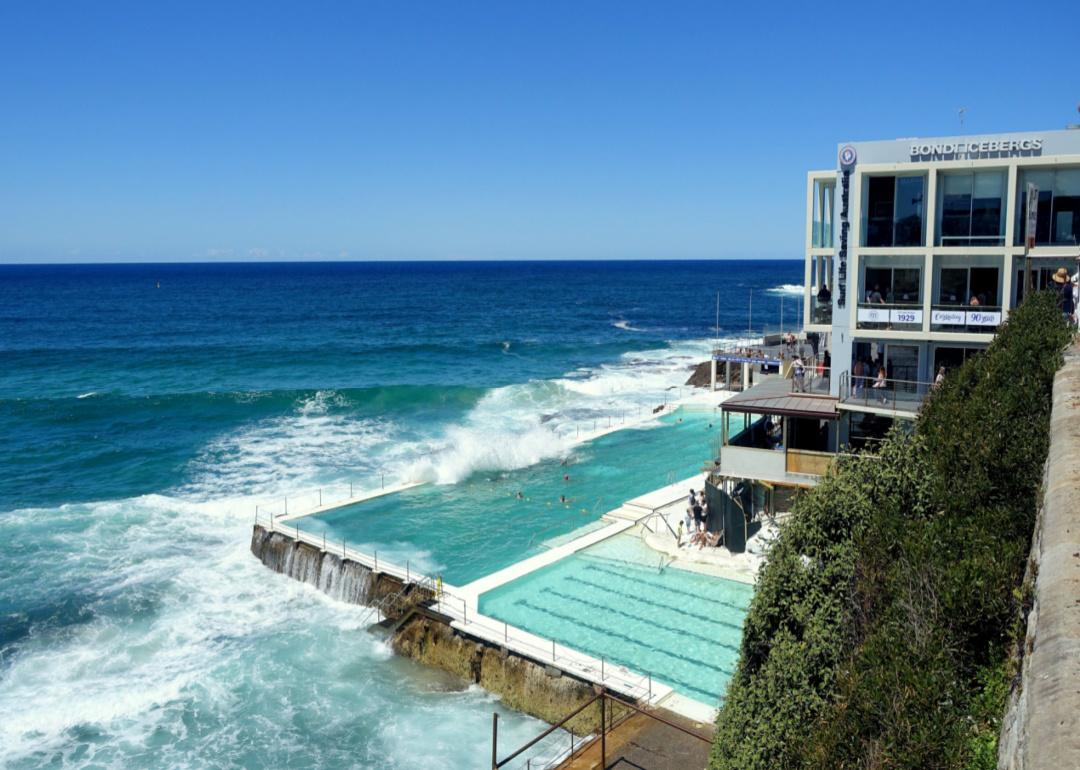 Feel the splash of the ocean waves while swimming in the Bondi Icebergs pool. A gigantic saltwater pool, the Bondi Icebergs was named after the Sydney lifeguards that first started a swim club to keep fit in the winter. The pool is open to the public year-round.

The pool, considered the most popular in Australia, began as a small pool built on Bondi Beach in 1887. By 1910-1911, prominent athletes used the clubhouse as a meeting space. In 1929, the Bondi Iceberg Swim Club was formed, birthing an active swim community that continues to this day. Swimmers can take in views of the Indian Ocean while in a 150-foot pool on a cliff. The Alila Villas Uluwatu resort opened in 2009 and was designed as a sustainable property with Earth-friendly initiatives like organic gardens, a no-plastic policy, and zero-waste efforts.

In addition to housing an art gallery with modern Indonesian works, Alila Villas also features a fitness center, 24-hour spa, and gym. Each villa has a pool and cabana with picturesque views of the sea. The rooms are designed with garden elements and draw inspiration from local farmers. Guests can also dine in the restaurant’s open kitchen, enjoying their meal over 200 feet above sea level. 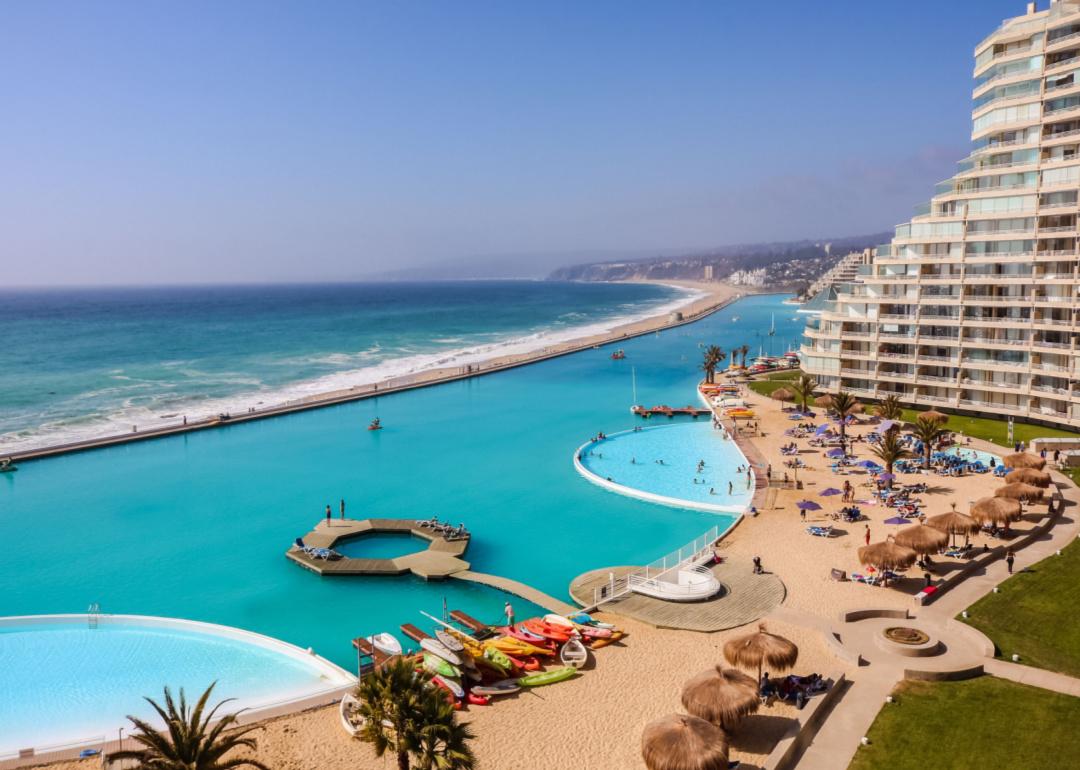 The pool at San Alfonso del Mar is legendary for its massive size, and until 2015, held the world record for “largest man-made lagoon” in the Guinness Book of Records. The saltwater pool covers 20 acres and contains more than 6.6 million gallons (250 million liters) of water. The pool is so large that guests are encouraged to try other water activities, such as kayaking or sailing.

Crystal Lagoons, a U.S. firm with several development projects in other countries, developed the pool. In addition to its large size, the clear blue waters in the pool mimic the pretty aqua color of water seen in tropical seas due to technology made possible by Crystal Lagoons. 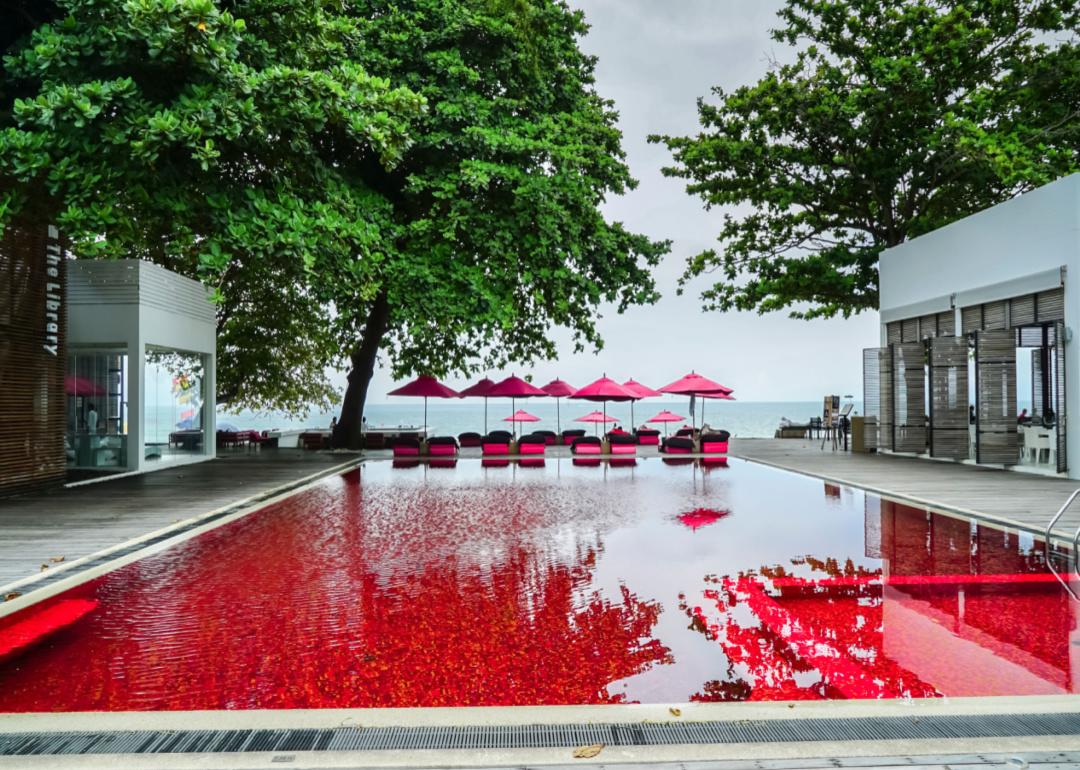 Get into a blood-red pool with a view of a Thailand beach. The Library Hotel earned accolades for its exquisite use of materials and design when it opened in 2007. Its most distinctive feature is its unusually colored pool, lined with scarlet red Italian tiles, meant to pick up the color of the parasols and loungers behind it.

The boutique luxury beachfront contains spacious rooms, with many buildings having a white minimalist look and decor items derived from natural wood. The hotel also features a library with a massive book collection and a reading room. There’s also a fitness center that boasts stunning sea views. 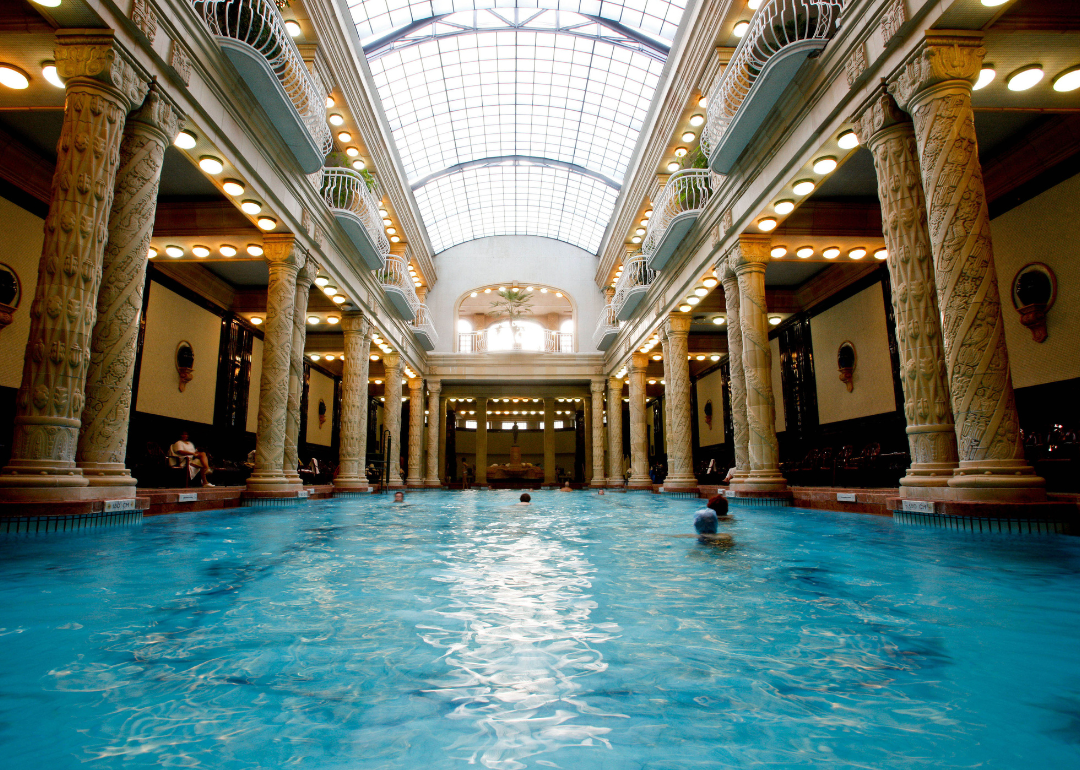 The Gellért Baths in Budapest are widely known for their healing properties, with 10 different pools varying in size and temperature. The baths were built in the early 1900s in the art nouveau style. It has remained a popular tourist attraction. Guests who visit can expect medicinal water treatments for reasonable costs.

A water filtering device is used in its sitting pool, outdoor sitting pool, and children’s pool. Chlorine and other chemicals are not added to the thermal pools but are introduced sparingly in swimming pools to meet safety standards. 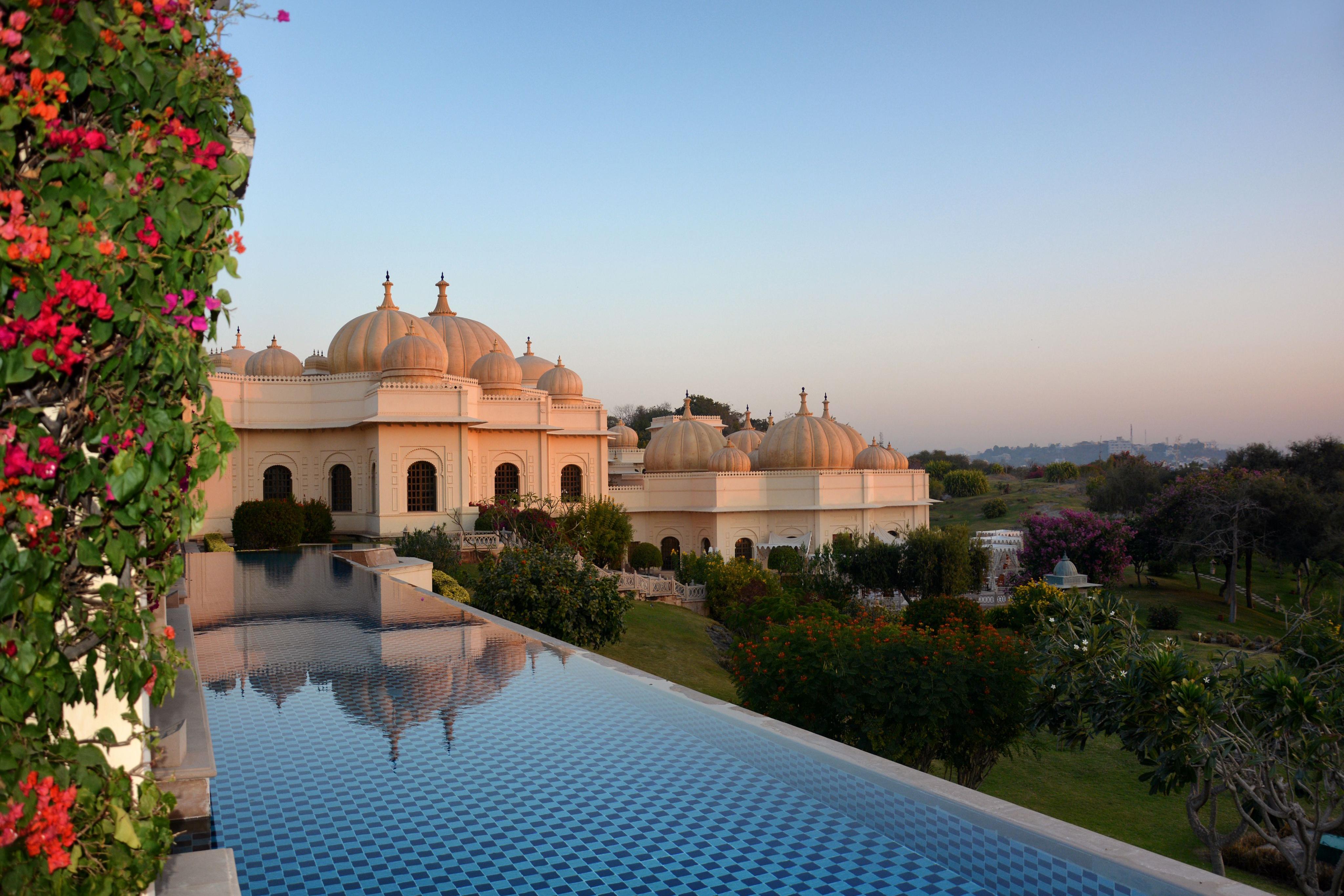 Oberoi Udaivilas, located on Udaipur’s Lake Pichola, features over 50 acres of sprawling courtyards. The historic property was built with architectural designs inspired by the Mewar dynasty.

Guests can enjoy two swimming pools and restaurants, the resort’s spa, and a fitness center. The rooms in the hotel offer picturesque views of the City Palace and two 17th-century island palaces—Jag Mandir and Jag Niwas. With modern amenities, stand-alone tubs, and the main pool adorned with sandstone columns, guests may appreciate the tranquil getaway that captures a royal era. 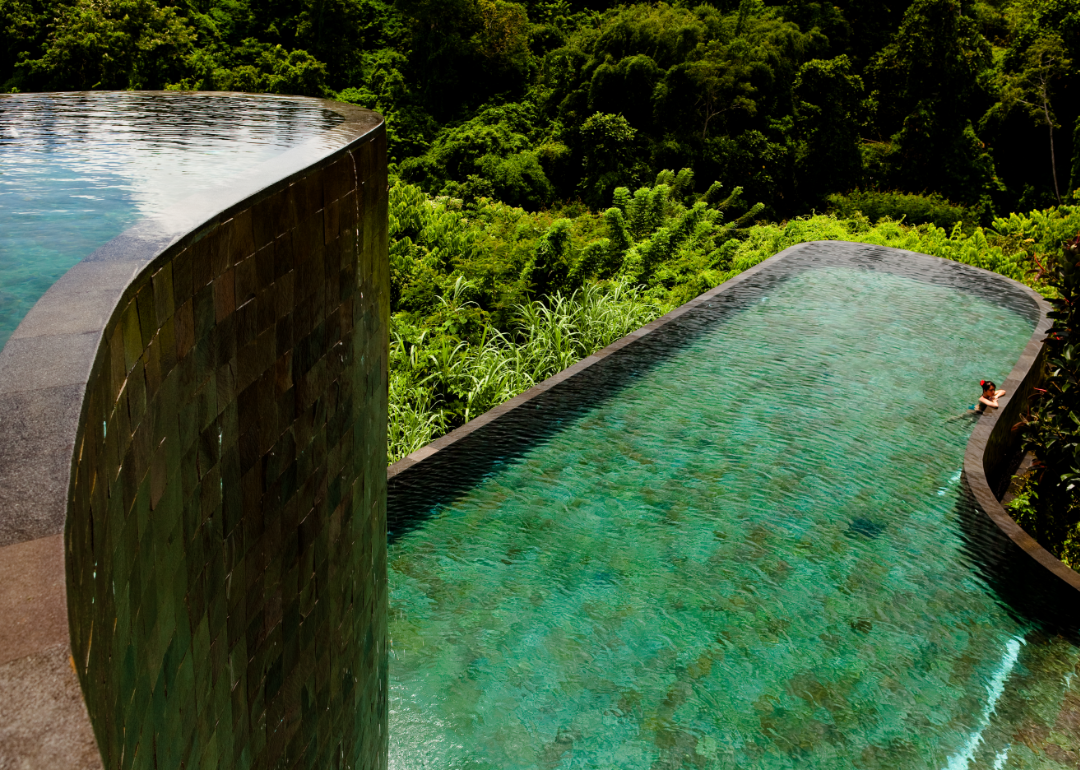 Get centered surrounded by rainforests and rice terraces at Ubud Hanging Gardens in Bali. The 44-villa luxury property was built in 2005 with restaurants, a spa, and an infinity pool on two levels. The pool is suspended above the exotic trees and appears to float in place, giving swimmers the feel and thrill of swimming high above the Balinese jungle.

The property was built by several hundred artisans using feng shui, the Chinese practice of creating balance with natural elements and using energy to create harmony in indoor spaces. Each room and suite at the resort contains an infinity pool. 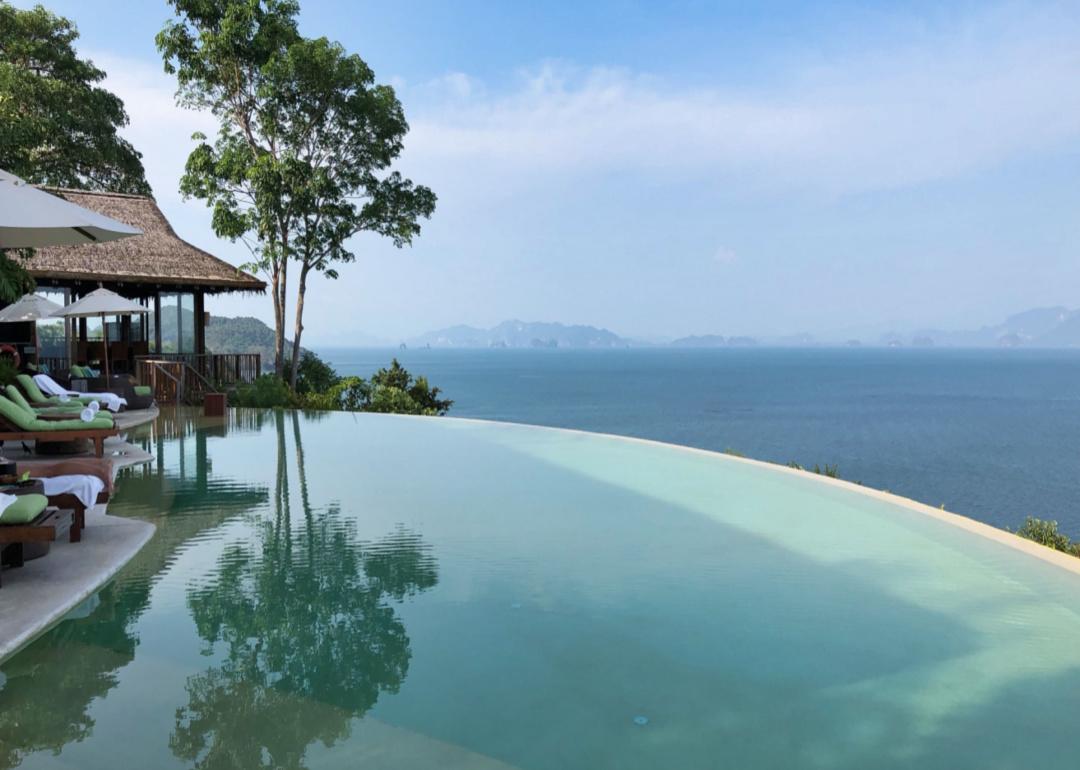 Set on Phang Nga Bay, a backdrop for the Bond movie “The Man with the Golden Gun,” Six Senses Yao Noi Hotel and Resort offers guests a variety of views, from the bay’s stunning panoramas to forest landscapes. Each villa at the hotel comes equipped with a private pool. An additional perk for movie buffs: the hotel also offers tours with an eye toward the James Bond movie.

The first Six Senses Yao Noi Hotel and Resort was established in 1995. Since then, Six Senses has established itself as a sustainable luxury space with architecture made from natural materials. In 2019, IHG Hotels acquired the Six Senses brand for $300 million. 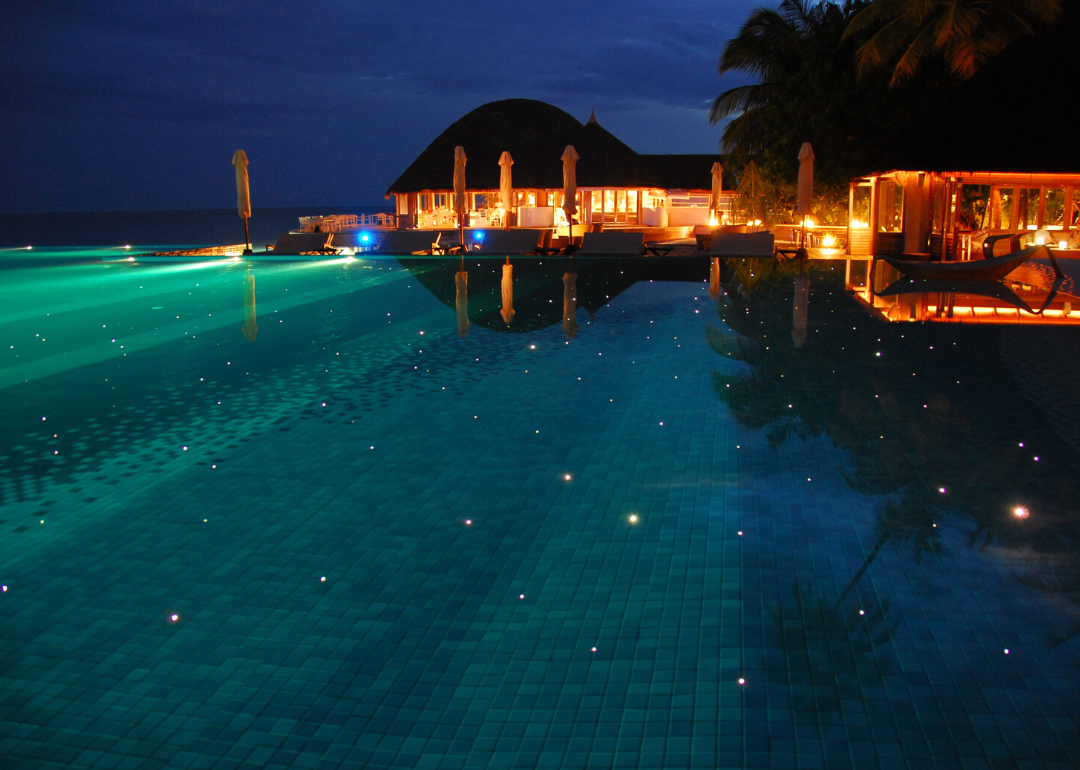 Hotel Huvafen Fushi in the Maldives

Sink into serenity at Hotel Huvafen Fushi, a private resort close to the capital Malé. The boutique resort features the world’s first underwater spa treatment rooms, situated 26 feet (8 meters) below the surface. After expert massages, guests can while away the time in relaxation pods that offer views of clownfish and stingrays. A private beach, infinity pool, and snorkeling opportunities are also available. 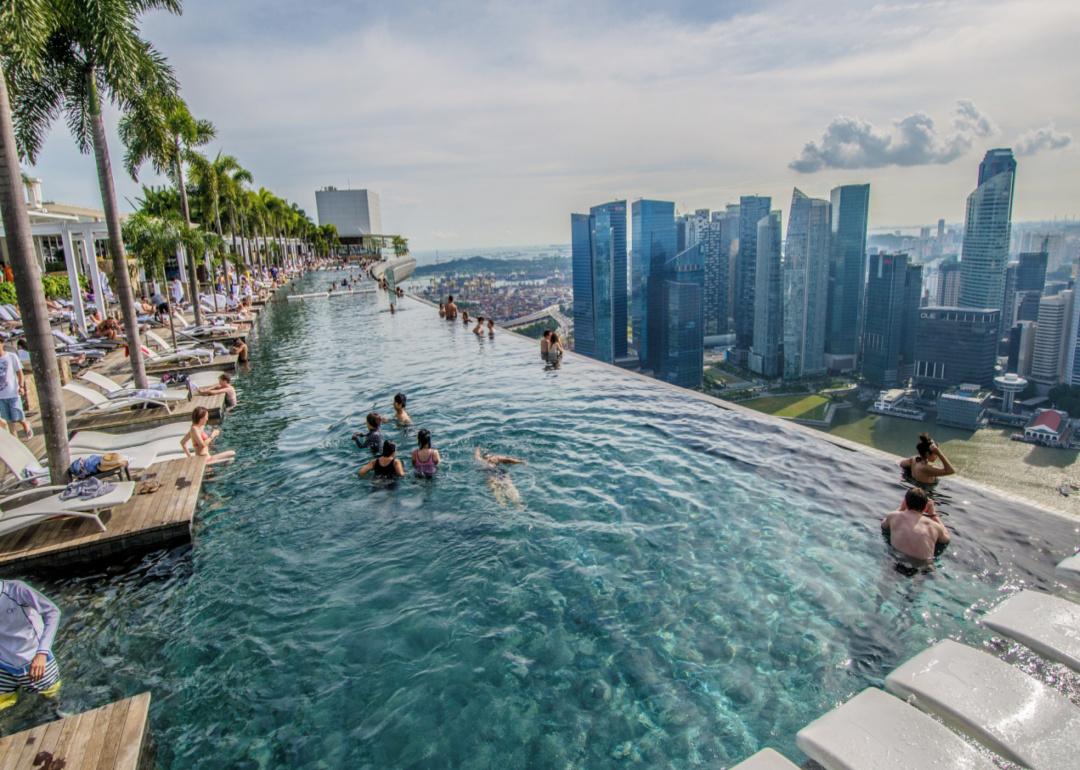 Marina Bay Sands is exclusive to hotel guests and provides stunning views of the Singapore skyline. Its infinity pool remains one of the resort’s most popular attractions, but only guests can access it.

This story originally appeared on Dolphin Pools and was produced and
distributed in partnership with Stacker Studio.