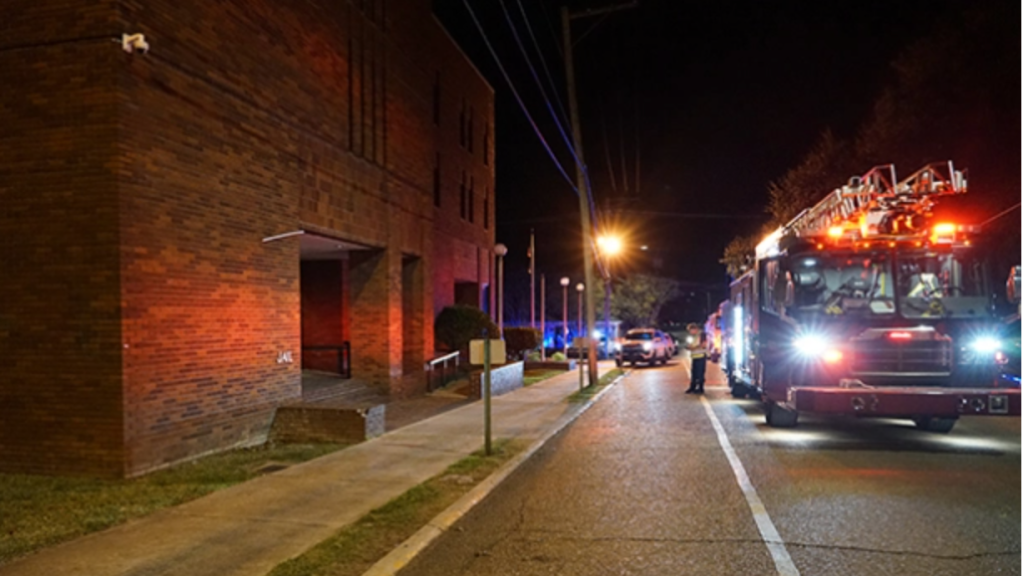 Firefighters, police and sheriff’s deputies filled the street outside of the Adams County Jail on Thanksgiving eve to respond to a fire inside the jail.

Adams County Sheriff Travis Patten said no one was injured and the fire was only a minor one.

“If any minor incidents happen, it’s a major incident because of the design of the facility,” he said. The fire was put out quickly before it spread, but smoke filled the building and forced an emergency evacuation.

Patten said he believes a disgruntled inmate started the fire using exposed wire from a TV set that had been removed from a second-floor holding cell earlier in the day.

He received the call at approximately 6:50 p.m. Wednesday and immediately mobilized several deputies and a few Natchez Police Officers to keep inmates in check during an evacuation.

“We did a shakedown today to remove contraband from cells and took out extra mattresses and t-shirts,” he said. “Some inmates weren’t happy about that and got their hands on a mattress and set it on fire. The fire was easily put out, and no one was hurt or injured. The public is safe. The only ones ever at risk were the jail staff and the inmates. Everything is under control, and we are ventilating the jail now.”

He said there are 66 total inmates held at the jail. All of the second-floor inmates and some on the first floor had to evacuate but have nowhere to evacuate to but a small area at the rear of the jail called a “sally port.”

Twenty-six of those were held in the sally port while the Natchez Fire Department ventilated the building to get the smoke out.

Approximately 10 inmates had to be transported to the Concordia Parish Jail.

“They jumped right into action and opened their doors to us,” Patten said. “I called Attorney Scott Slover to make sure we could take them across state lines and he gave us the green light.”

Patten said investigators are reviewing security video to determine who caused the fire.

“It is under investigation,” he said. “Once we determine who is responsible for damage to county property, we will absolutely charge them.”

Patten said pushbutton locking mechanisms on the floor where the fire started lost power and are not working. The jail also has an issue with inmates purposely jamming the locks on the doors, he said.

“In order to issue corrective action you have to have lockdown cells. We don’t have any way to lock them down and some cells don’t lock at all,” he said.

“This is a constant problem in the jail. We have no place to put problem inmates away from others. …I keep telling everybody we must do something about the issues at this jail. The supervisors are aware of the problems and have assured me they will work to fix some of the issues we have. However, we can’t continue to kick the can down the road.”