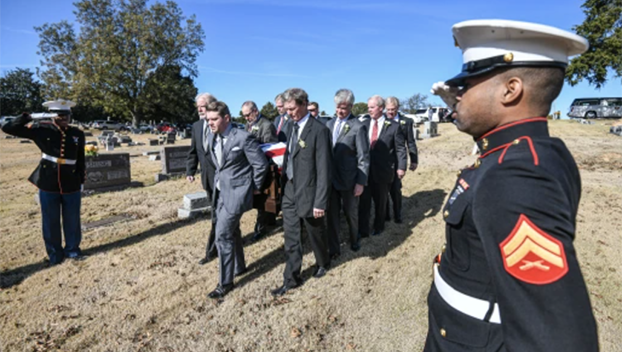 On a cold, but sunny, Tuesday afternoon, family and friends of Harvey Seale gathered at Batesville Magnolia Cemetery to pay final respects at the interment service for the Marine veteran widely believed to be the last WWII participant still living in Panola County.

The Batesville native had been in declining health for several months, and became gravely ill two weeks ago. He passed away peacefully at his home on Saturday, Nov. 19.

He joined the Marine Corps upon his high school graduation in 1943 and served in the Second Marine Division in Saipan, Tinian, and Okinawa.

On June 15, 1945, just five months before the end of the war he was wounded several times on Okinawa. After several months in the Naval Hospital in Charleston, S.C., he returned to Batesville, and was later awarded two Purple Hearts.

Seale was laid to rest with full military honors in a somber and touching ceremony befitting his combat career.

“A native son, James Harvey Seale was a friend to many and a special friend of mine,” Mayor Hal Ferrell said in a statement released this week. “He shared with me that during World War II he was seriously injured in battle and overheard the medic say, ‘this one is not going to make it’. Harvey proved him wrong. He survived, thrived, and became one of the most patriotic Americans of the Greatest Generation from Panola County,” Ferrell said.

“His love and devotion for his family was a visible bond. Their presence for decades and attendance and participation at Veterans Day and Memorial Day programs will serve as his legacy to young people,” he said.

One of Seale’s last public events was the 2022 Memorial Day program held on the Batesville Square in the spring. At that program the Exchange Club asked Seale to lead all veterans in attendance to the memorial marker near the gazebo where he placed a wreath of remembrance for the lives lost in America’s wars.

Calvin Land, who serves as Quartermaster for the Veterans of Foreign Wars Post 4968 in Batesville said Seale’s death is a “great loss” to the county and particularly to the combat veterans of other engagements still living in the county.

“When he got home from the war he joined the VFW right away and became Post Commander in 1955,” Land said. “He was always there for other veterans, and we would sit and talk about war times. You try to forget it, but when you have faced enemy bullets you have something kind of special with each other. Harvey was always there for anybody that needed to talk about those things.”

“He was a hero, and there’s not many like him left,” Land said.

Often referred to as the Greatest Generation, it is estimated that 167,000 WWII veterans are still living, with an approximate 250 passing away each day.

Seale worked for the U.S. Postal Service in Batesville for many years before retiring to travel with his wife, the late Georgia Figg of Courtland.