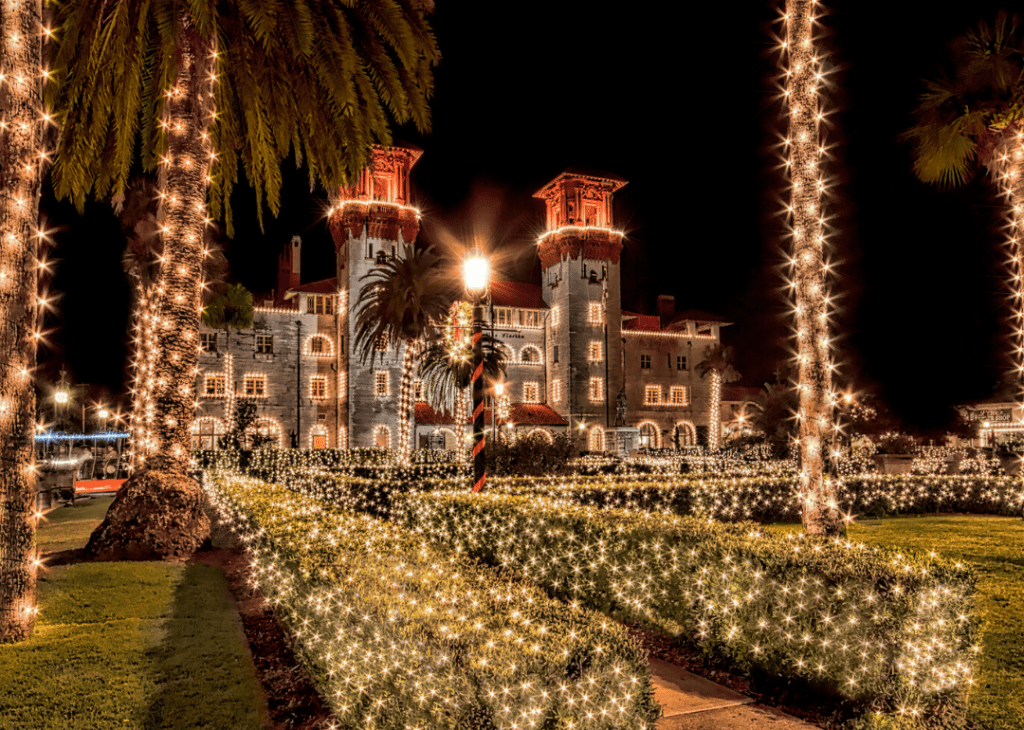 As soon as the final slice of Thanksgiving turkey is carved, it seems radio stations start playing Christmas music around the clock, and twinkly lights appear on houses. In fact, some hardcore holiday lovers start decorating and decking the halls for the festive season as soon as Halloween ends—if not earlier.

There’s something impressive about homeowners who go all out with light shows set to music and larger-than-life, winter-themed inflatables. To celebrate these holiday lovers who want their decorations to rival the North Pole, Stacker scoured the internet to find photos of 25 of the most incredible Christmas displays in the United States. Some are neighborhoods that band together to put on a blocks-long show in December, while others are holiday-themed landmarks that keep their festive spirit going year-round. Admirers can visit some of the displays on this list for free, just by driving or walking through the neighborhood, while others are ticketed attractions.

Each of the Christmas displays included here puts its own spin on the holiday season. From the world’s largest Santa to a holiday light tour that focuses on intentionally tacky displays, each landmark on this list takes an altogether different approach. Read on to discover states that boast one of these incredibly elaborate light displays and get inspiration for Christmas decorating. 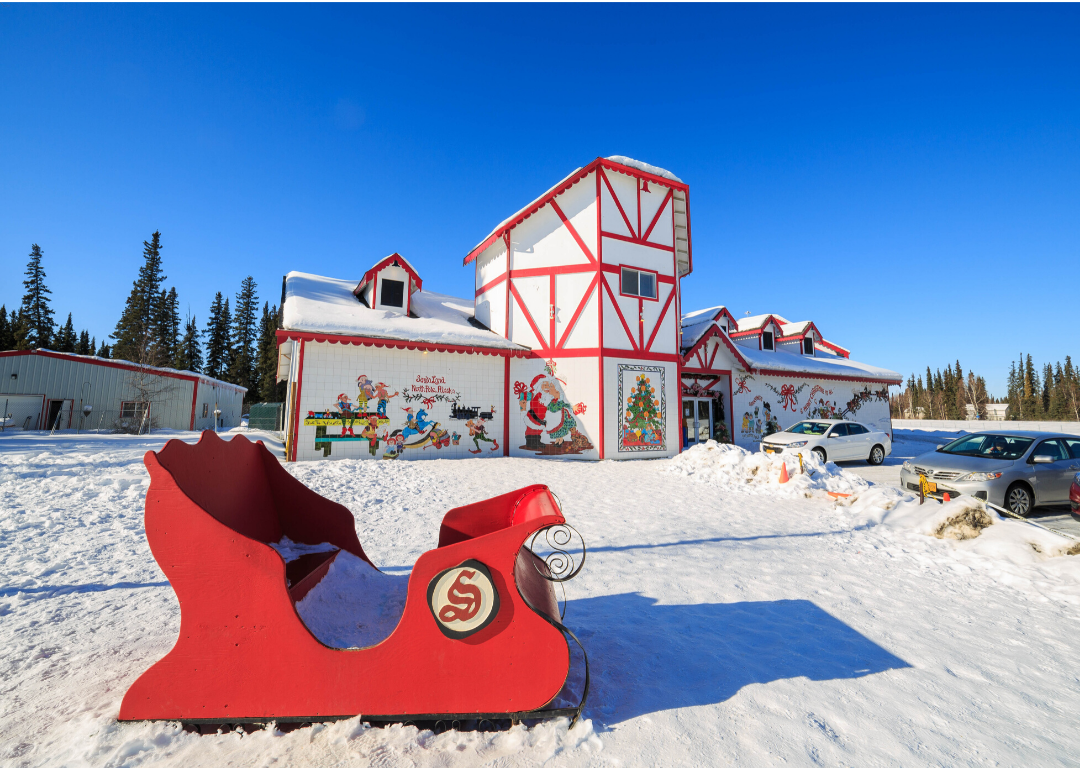 Alaskan merchant Con Miller used to dress up as Santa Claus for the local kids every Christmas, so when he and his wife decided to open a trading post in North Pole, Alaska, in 1952, naming it Santa Claus House was a no-brainer. Inside the red-and-white building, visitors can buy Christmas decorations year-round, sample fudge and other treats at The Sweet Shop, and order official letters from Santa. Visitors will find the world’s largest Santa Claus statue, an authentic sleigh, and may even be able to pet some of Santa’s reindeer. 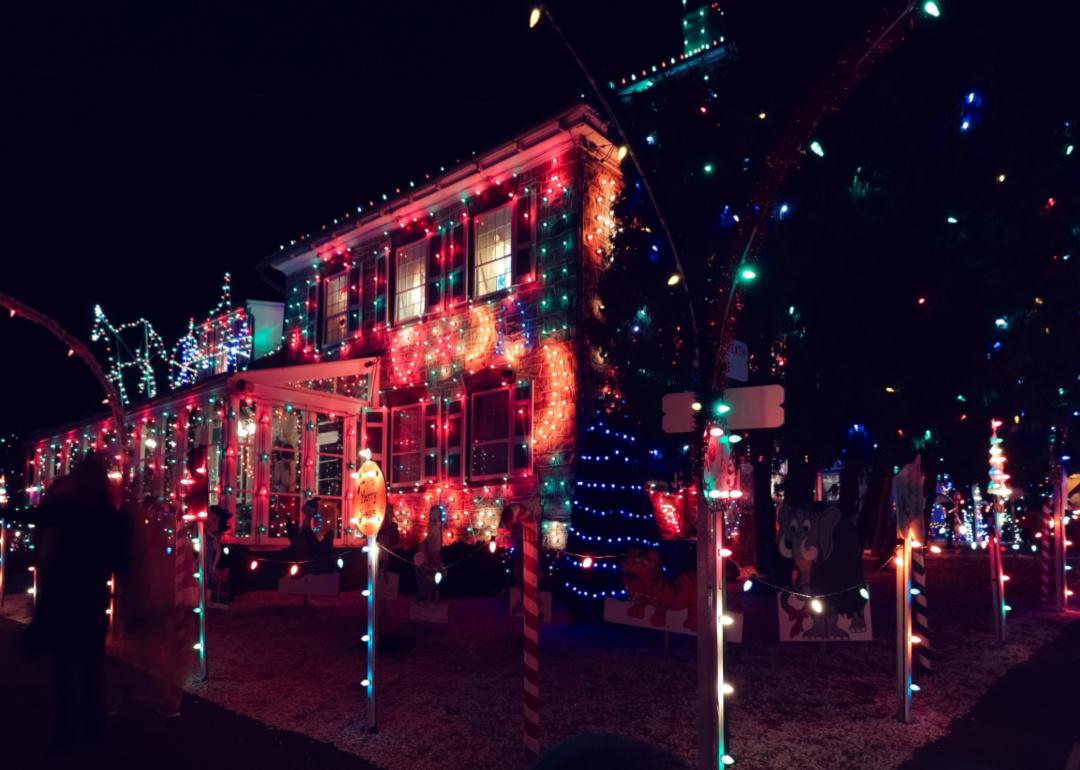 William M. Koziar was an early adopter of outdoor Christmas lights—he began decorating his family home with the twinkly bulbs way back in 1948, right around the time they became affordable and weatherproof. Each year, his display would grow and expand. Today’s decorations, which are now set up by third- and fourth-generation Koziars, include more than 1 million lights covering the entire valley surrounding the familial homestead. 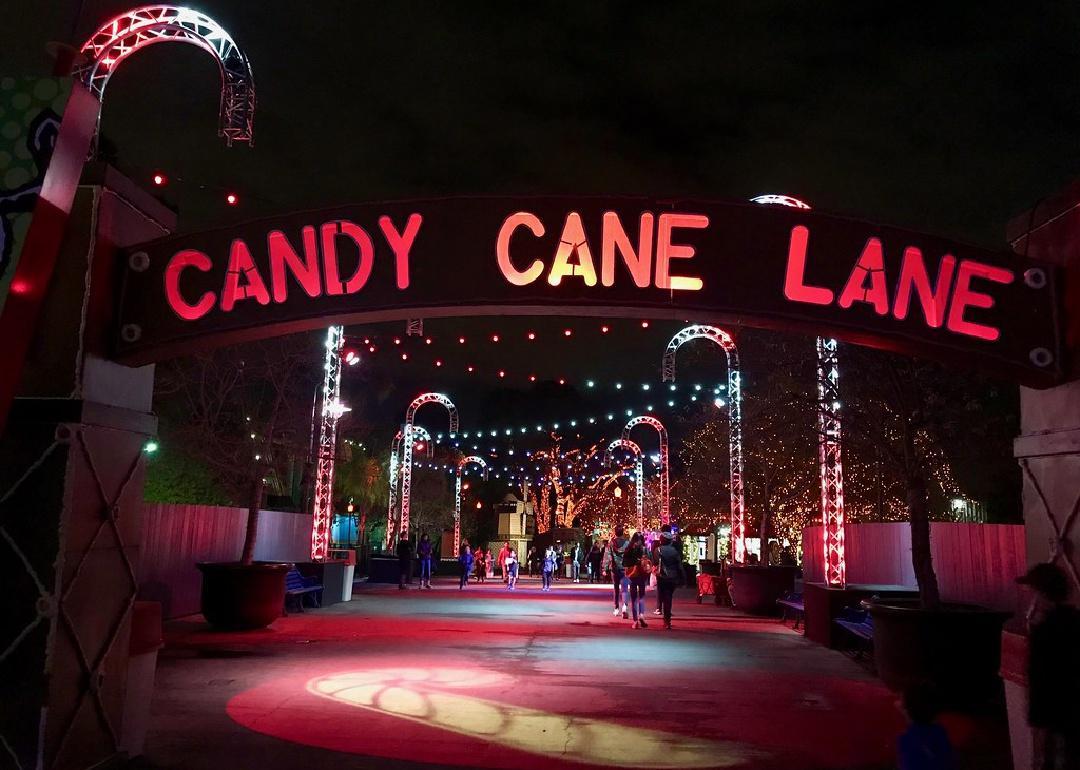 The intersection of Lubao Avenue and Oxnard Street in the Southern California community of Woodland Hills has become known as Candy Cane Lane, thanks to the residents’ propensity for staging elaborate Christmas displays every winter. Past displays have included allusions to “It’s a Wonderful Life,” “Peanuts,” and even “Star Wars.” Just drive through the neighborhood to take in the holiday magic. 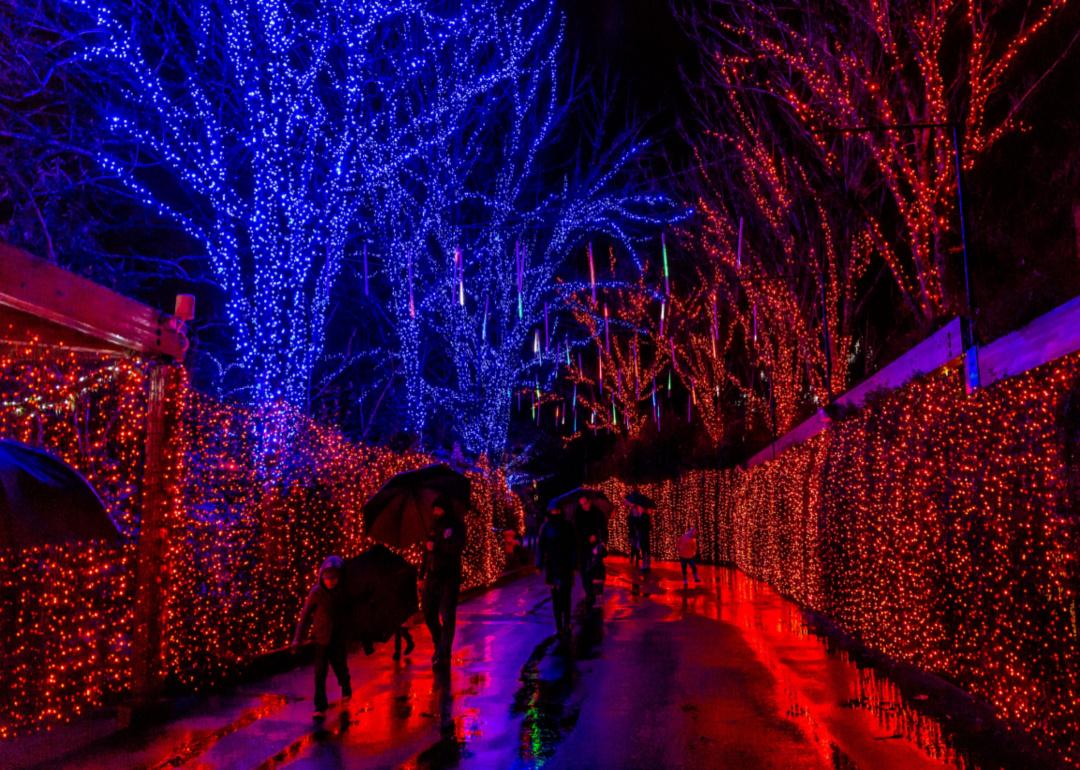 ZooLights—one of Oregon’s most popular holiday traditions—lights up the Portland zoo, covering its landscaping and decor with 1.5 million twinkly bulbs. While the menagerie’s hundreds of animals aren’t available for viewing at the after-dark event, patrons can enjoy plenty of holiday-themed snacks and locally sourced adult beverages on 21+ BrewLights nights. 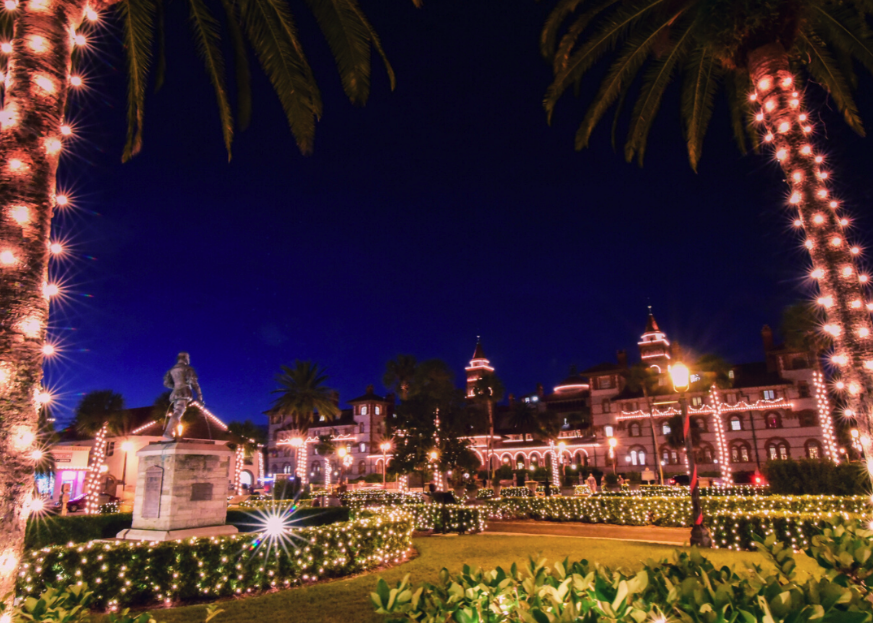 The nation’s oldest city shows off its Spanish Colonial architecture to a spectacular degree during the St. Augustine Nights of Lights, when it seems like every building in town is lit with twinkling lights. Visitors can walk around St. Augustine Nights of Lights for free. Visitors can book a boat tour to see the sparkling display from the water for an even more breathtaking view.

You may also like: 31 breathtaking images from NASA’s public library 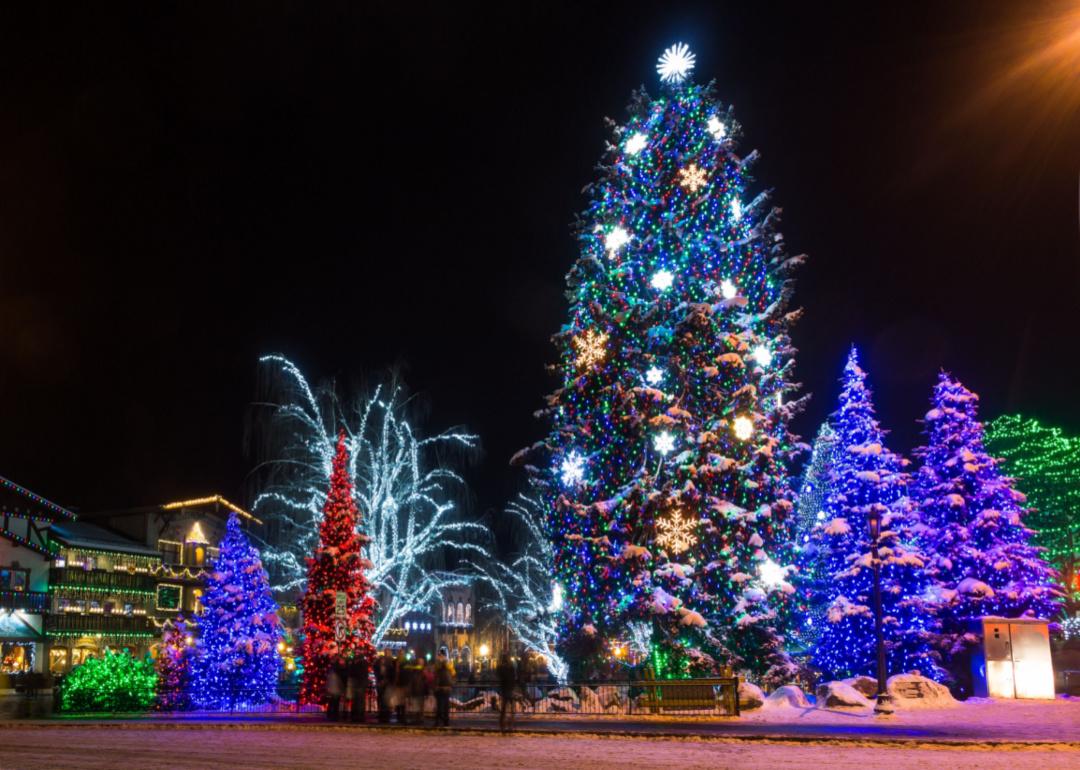 With its Bavarian-style buildings and gazebo-filled squares, the Village of Lights: Christmastown! in Leavenworth, Washington, feels like the set of a Christmas movie year-round. But when it’s transformed by more than 500,000 LED lights that cover every square inch of main street’s storefronts and trees, it truly becomes a Hallmark-worthy destination. 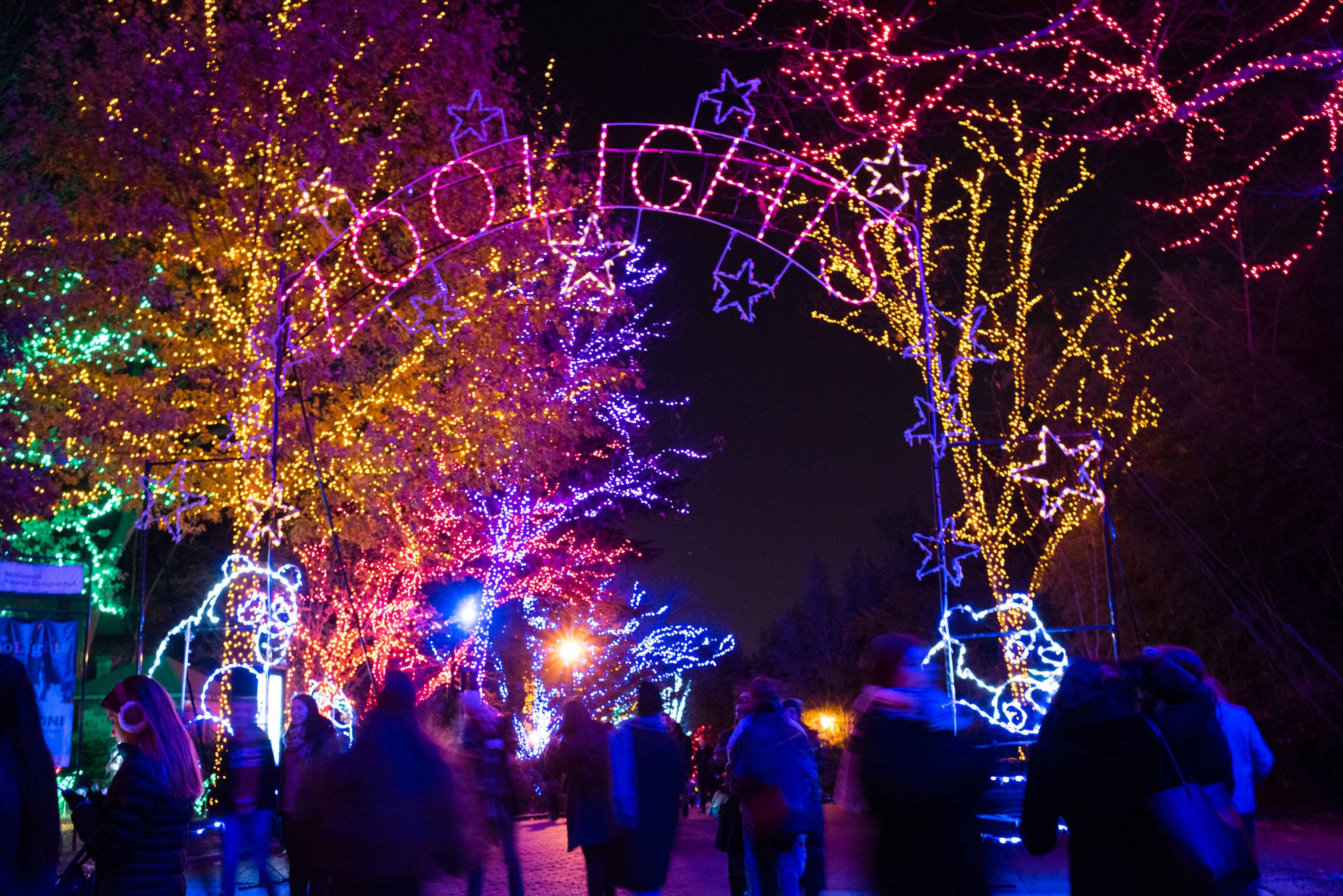 Zoolights at the Smithsonian’s National Zoo in Washington DC

The Smithsonian National Zoo’s Zoolights experience isn’t just a light show. Don’t get us wrong, there are plenty of those—enough to cover nearly every square inch of the park’s grounds—but there is also live music, a holiday market, and enough refreshment stands that visitors can forgo dinner. The event is free, and attendees simply need to reserve their spots via the zoo’s website ahead of time, though parking costs $30. 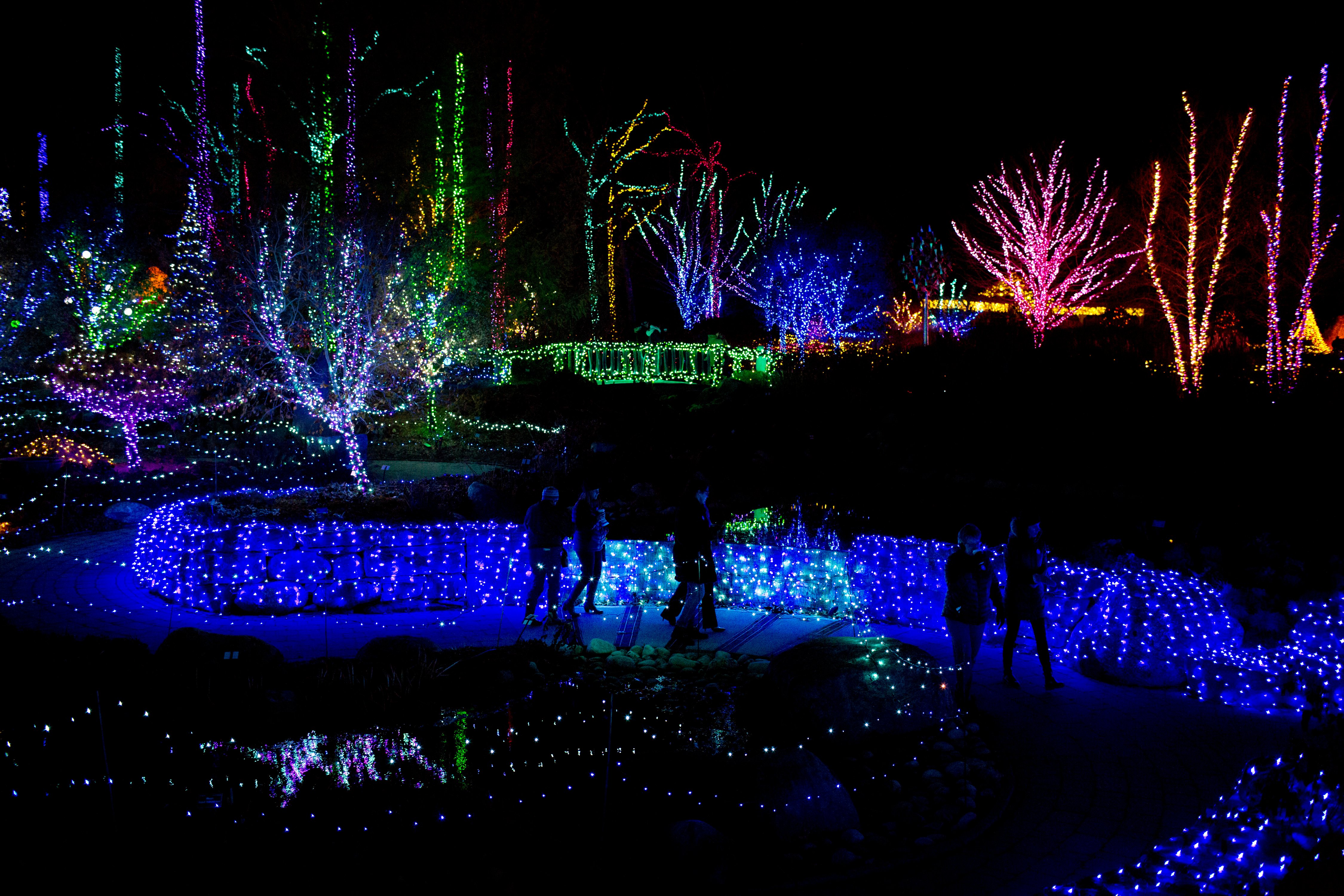 With more than 750,000 lights, Gardens Aglow in Boothbay, Maine, is New England’s brightest and biggest holiday light display. The 14-acre Coastal Maine Botanical Gardens are transformed into a mesmerizing, twinkling spectacle for the festive season. Tickets run from $14 per adult for botanical garden members to $45 for a family of four with two adults and two children. 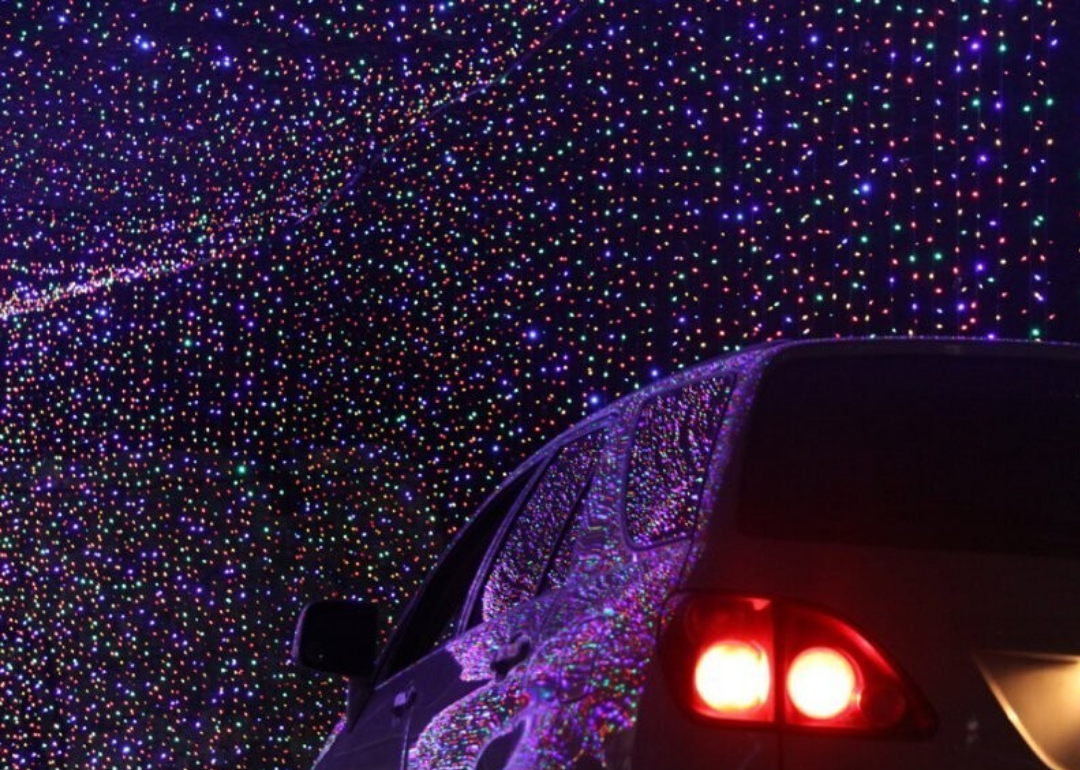 Courtesy of Lights Under Louisville

During the holiday season, the Louisville Mega Cavern—a former limestone quarry turned tourist attraction—becomes the home to a jaw-dropping Christmas display called Lights Under Louisville. Visitors can drive their vehicles through this underground display of more than 850 lit characters and 3,000,000 points of light for $34.99 per car. 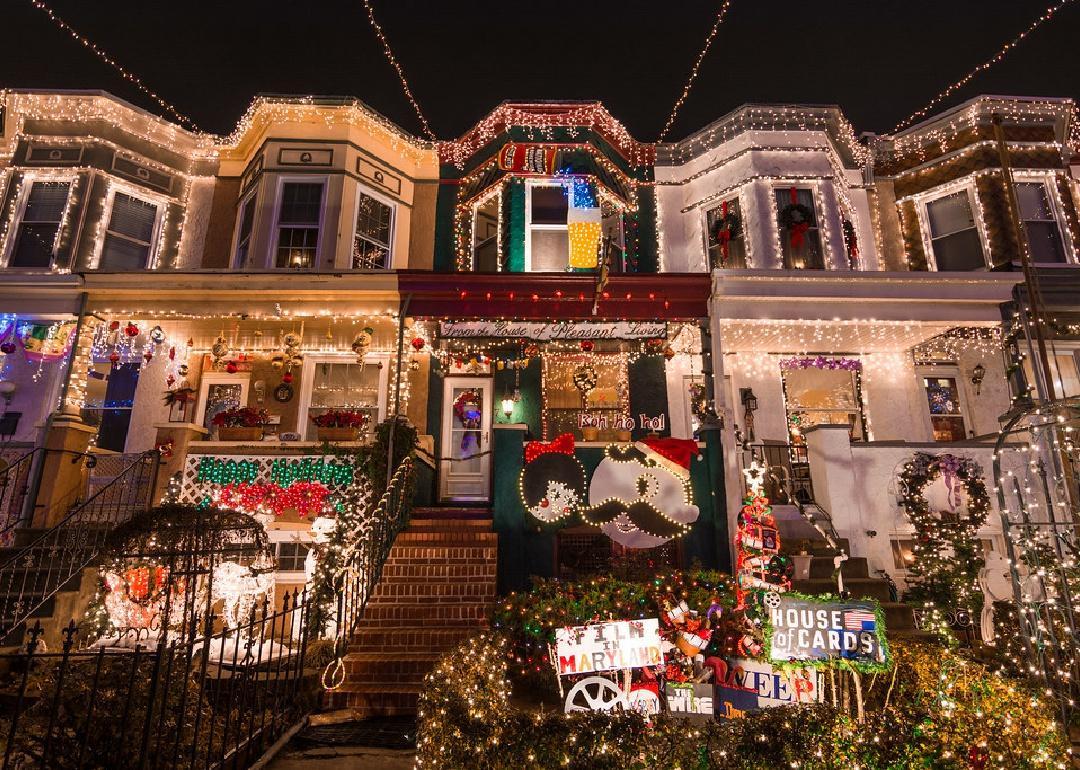 Neighbors on 34th Street in Baltimore’s Hampden neighborhood have decked their homes in Christmas lights for over 70 years. Decorations range from traditional angels, Santas, and candy canes to uniquely Baltimore additions like crabs made out of red twinkling lights, Orioles and Ravens decor, and even a Christmas tree made out of hubcaps. Anyone who wants to take in the festive street can walk by for free. 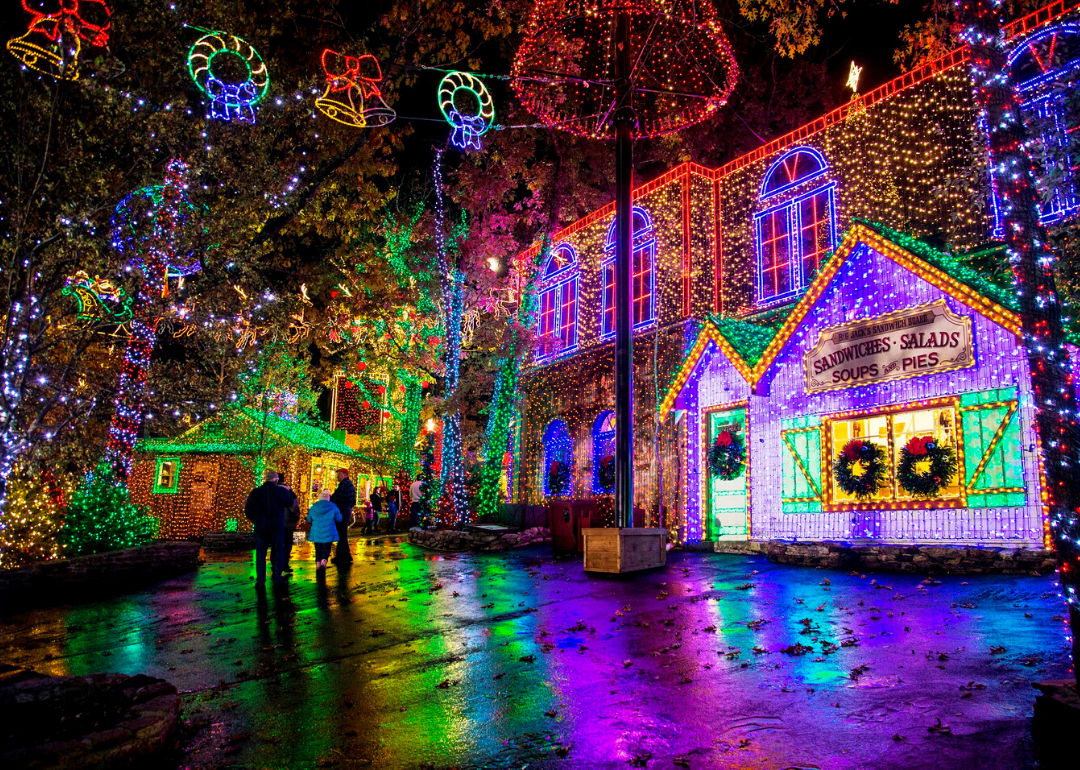 This Missouri theme park goes all out during the holidays. Attractions at its An Old Time Christmas celebration include a living nativity scene, an interactive children’s show featuring a 12-foot singing Christmas tree, a meet-and-greet with Rudolph himself, and holiday-themed plays, but the most popular by far is the incredible light display. Silver Dollar City boasts more than 6.5 million lights, and anyone who visits the park during the holiday season can soak up the holiday magic. 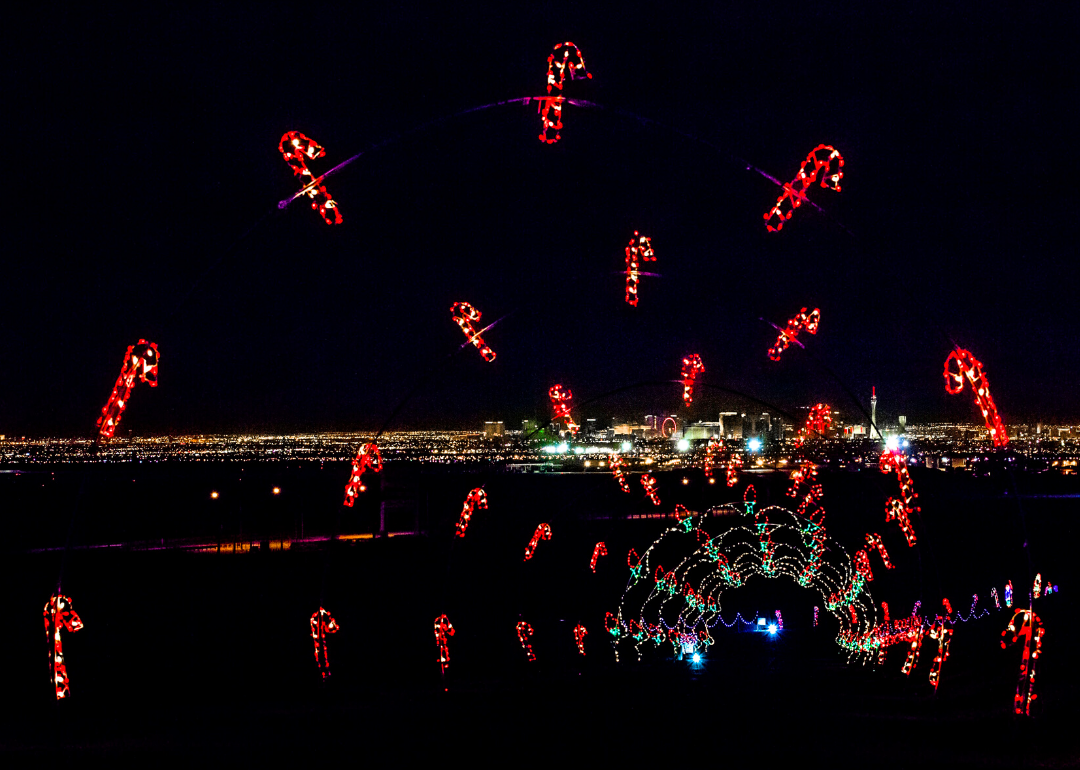 Glittering Lights, a holiday drive-through light show at the Las Vegas Motor Speedway features more than 5 million LED lights. A weekday ticket will cost $29 per car, and visitors will have to shell out an extra $10 to visit on weekends or holidays. Glittering Lights donates a portion of every ticket sale to Speedway Children’s Charities. 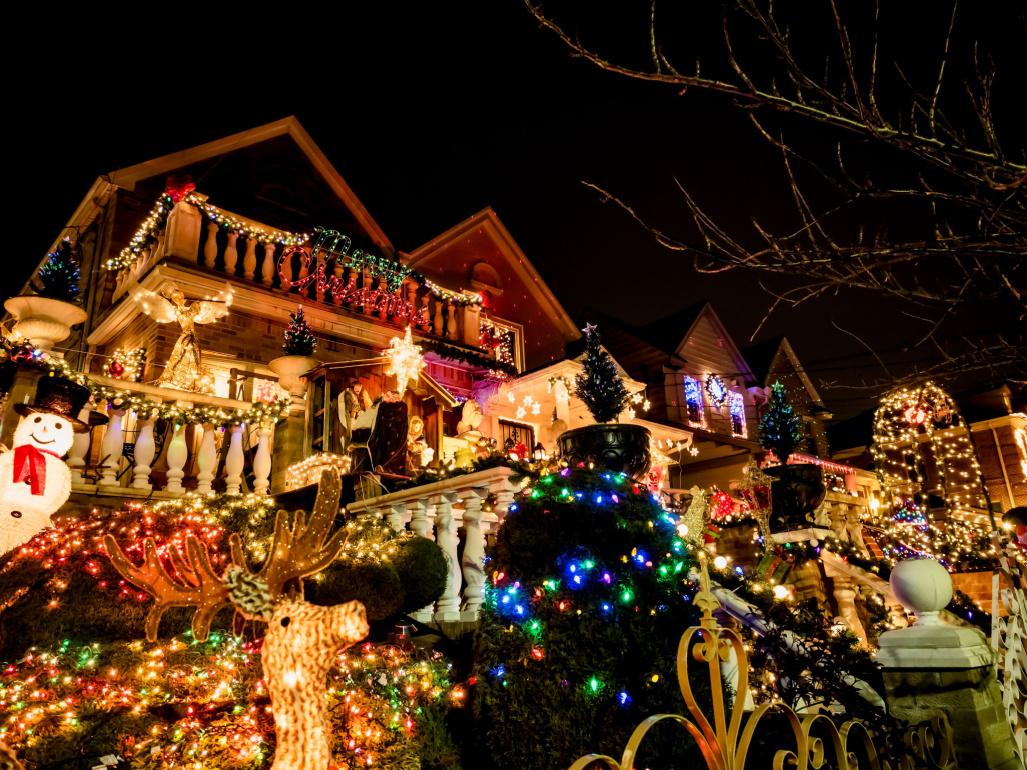 Residents of this Brooklyn, New York, neighborhood decorate their houses in over-the-top light displays and life-size characters every holiday season. Decorations usually go up the weekend after Thanksgiving. Anyone can view them between dusk to 9 p.m. daily until the end of the year by walking between the 11th and 13th avenues and 83rd and 86th streets. 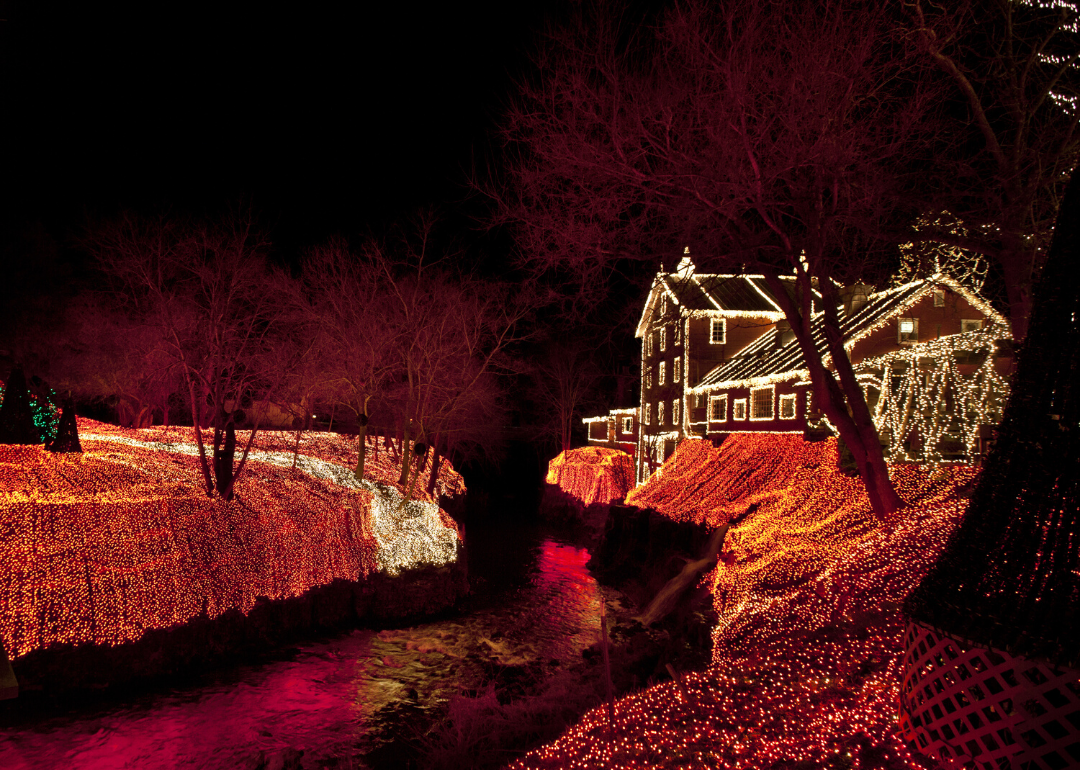 The Clifton Mill, an Ohio grist mill that dates back to the 1800s, gets a Christmassy makeover every winter when more than 4 million lights go up on the covered bridge. The display takes six workers about three months to build every year, and visitors can take in the stunning light show set to music every night between Thanksgiving and Dec. 30 for $10-15 per guest. There is no charge for children 3 and under. 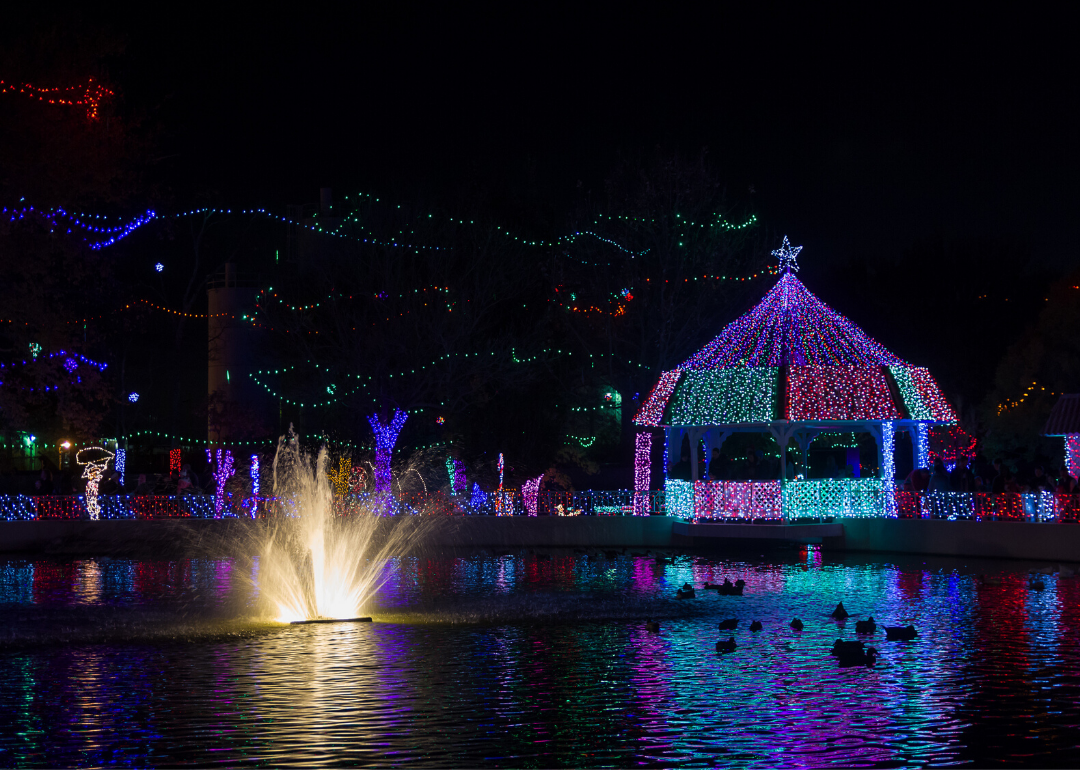 Since 1982, Rhema Bible Church has been putting on Rhema Lights, a beloved Christmas light show. Admission to see the 2-million-light display and Christmas tree forest is free, but visitors who don’t want to go on foot can choose to pay for carriage rides through the park. 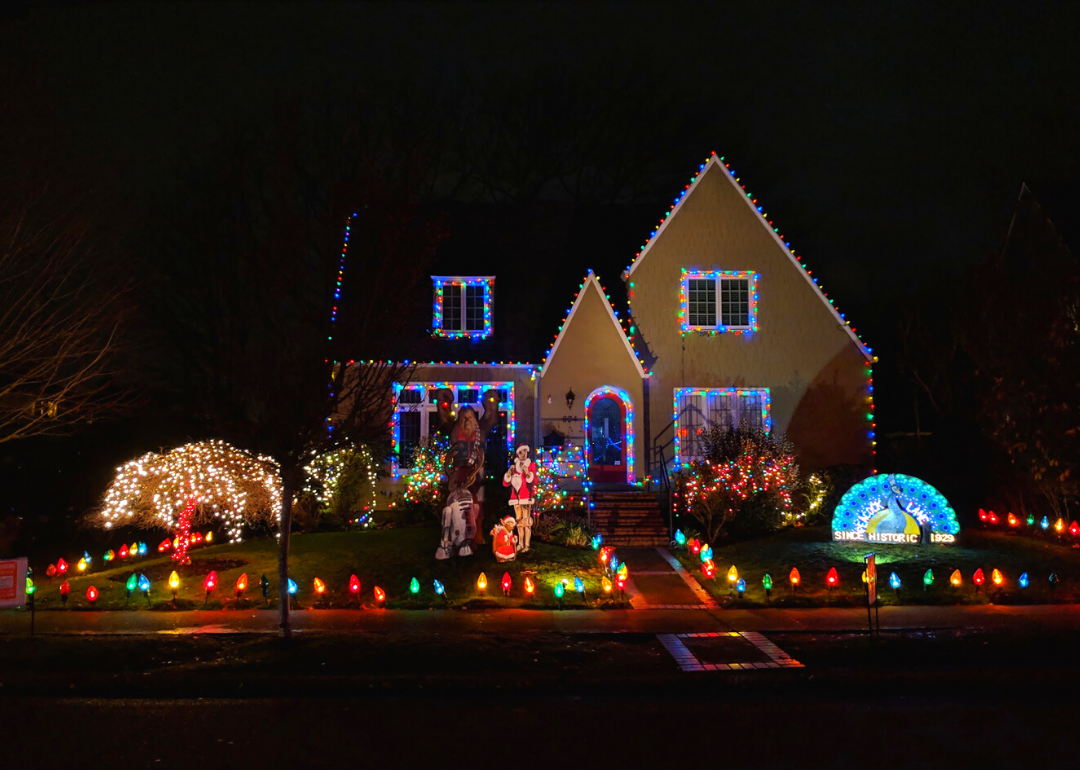 This Portland, Oregon, neighborhood is filled with quaint Tudor homes, and it has been decorating for Christmas as a group since 1932. Visitors can check out the festive decor from Dec. 15 to Dec. 31 from 6-11 p.m. Occasionally, the street closes to car traffic, so pedestrians can wander on foot, sipping hot cocoa and cider all the while. 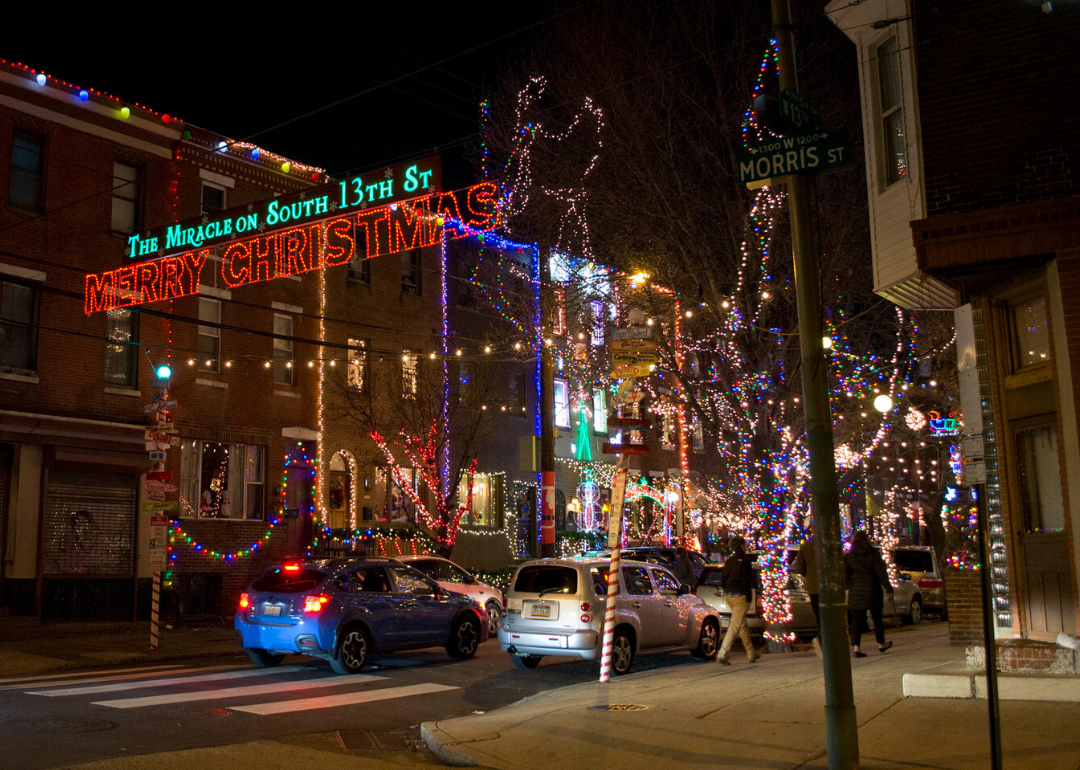 One block of South 13th Street in South Philadelphia typically contains more Christmas lights than entire neighborhoods during the holiday season. Walk between Tasker and Morris streets to take in this free spectacle. 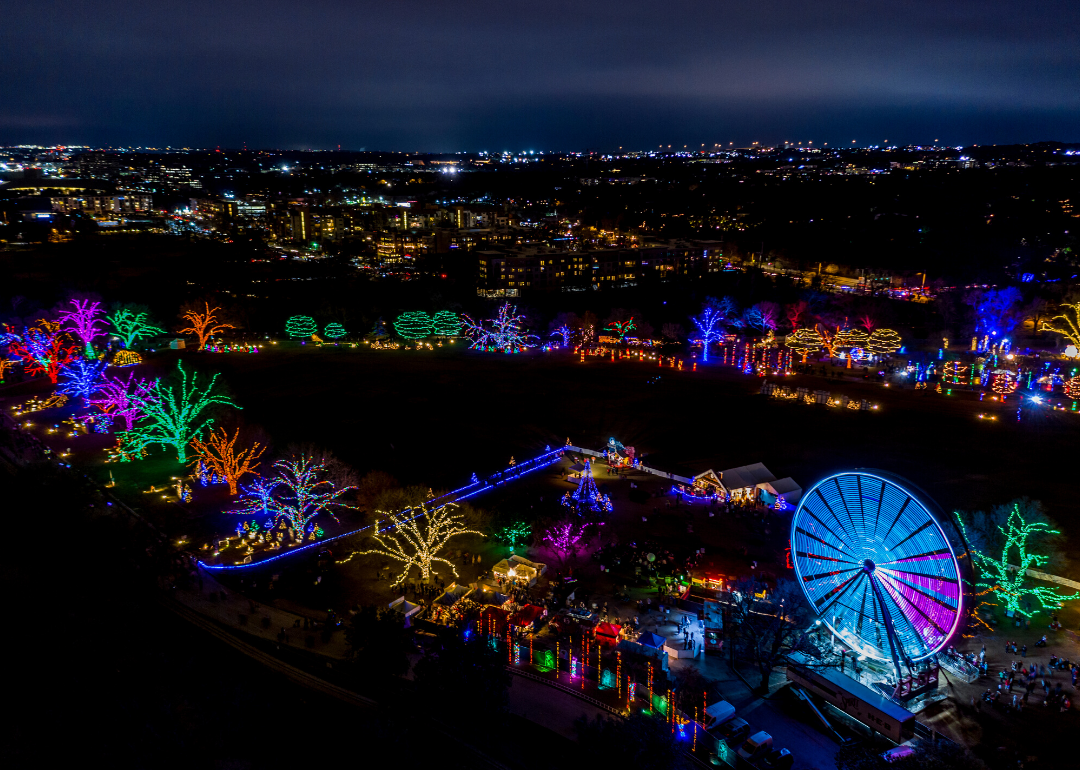 With more than 160 displays and 2 million lights, this annual event in Zilker Park draws visitors from all over Texas. Revelers can also buy snacks from local food trucks, get photos with Santa, and even participate in a yearly fun run through the park. Entrance is free seven days out of the 16 operating days, and parking passes range from $15 to $25. 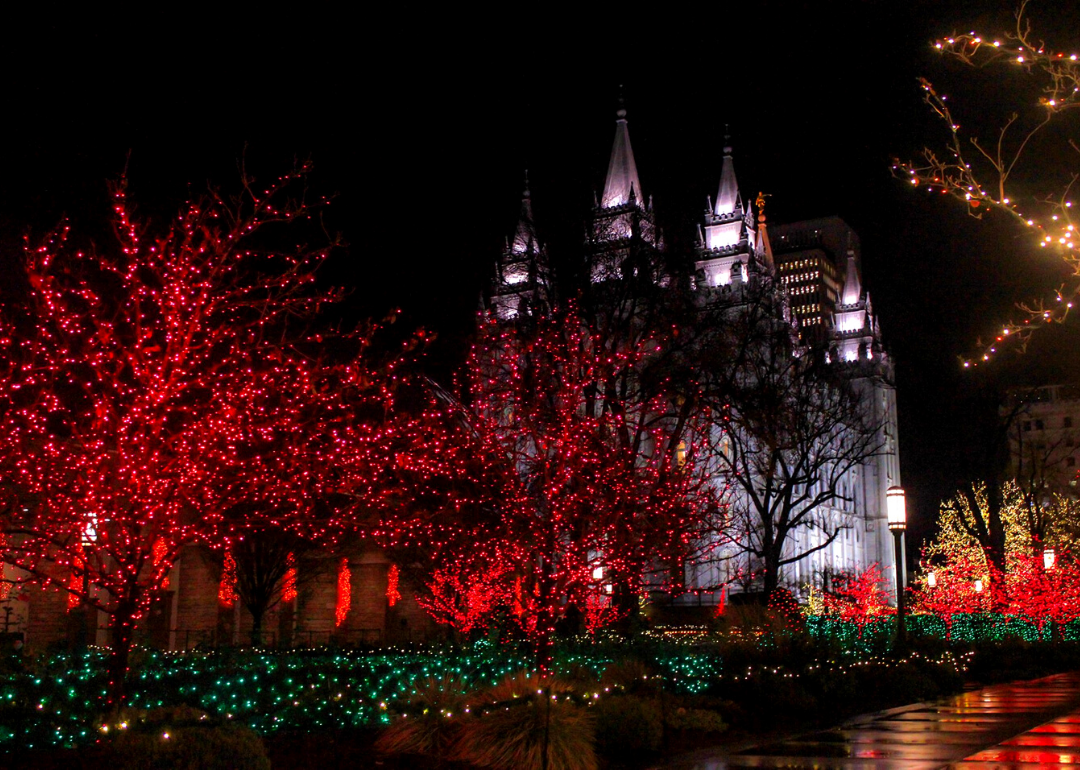 Starting the day after Thanksgiving, Temple Square in Salt Lake City becomes decked out with a plethora of Christmas displays. Anyone can take in the life-size nativity scene, the daily Christmas concerts, and guided tours. 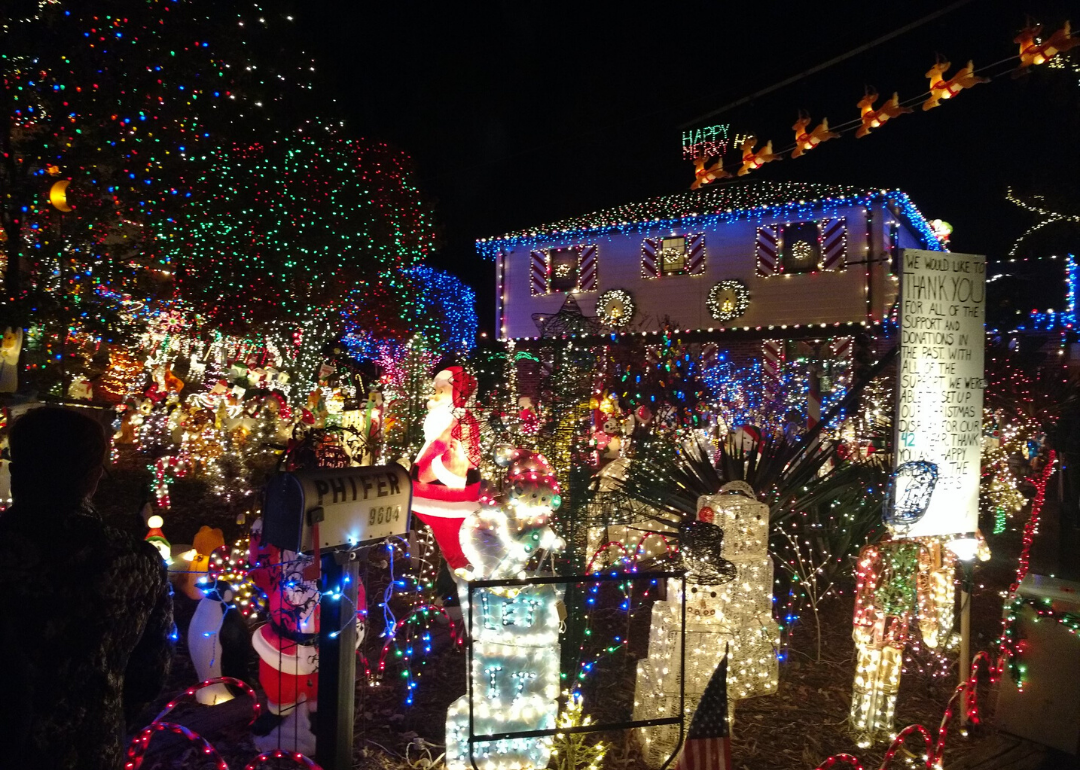 The Richmond Times-Dispatch always lists the best over-the-top Christmas lights in town so readers can create self-guided tours. Perennial favorites include a home with a live Grinch and a Christmas fantasyland full of handmade cutouts of holiday characters like Rudolph and Santa. 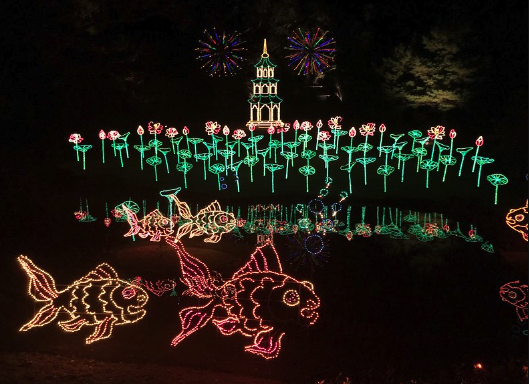 Alabama residents should set aside some time to visit this 1930s manor house during the holiday season. Three employees work year-round on the decorations, crafting set pieces and light displays from scratch. The walking tour of the manor’s 65-acre grounds near Mobile, Alabama, takes about an hour to complete, but strategically placed stops at Santa’s spot, and the multitude of refreshment stands will make sure even the smallest legs can finish out the night. 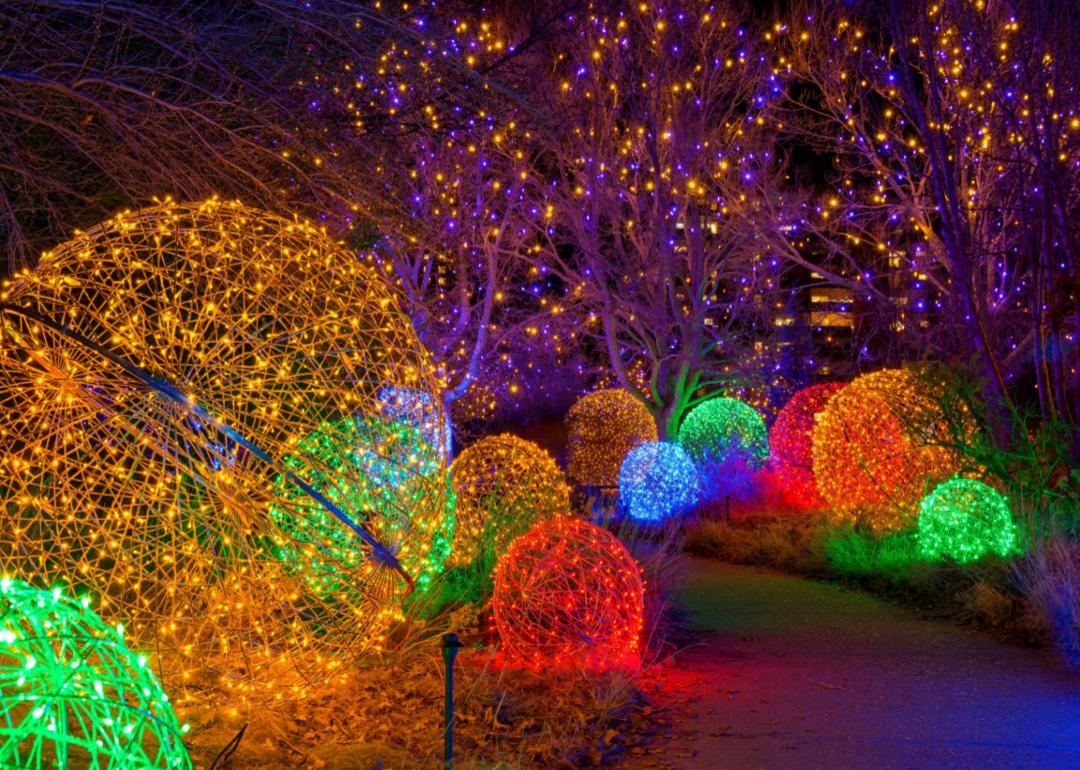 Blossoms of Lights at the Denver Botanic Gardens in Denver

Denver Botanic Garden employees take 13 months to develop, plan, and execute Blossoms of Light, the annual Christmas lights display that transforms the grounds into a twinkling winter wonderland. More than 500,000 LED bulbs cover every square inch of the property, and families can wander through the park from mid-November through the first week of January each year. 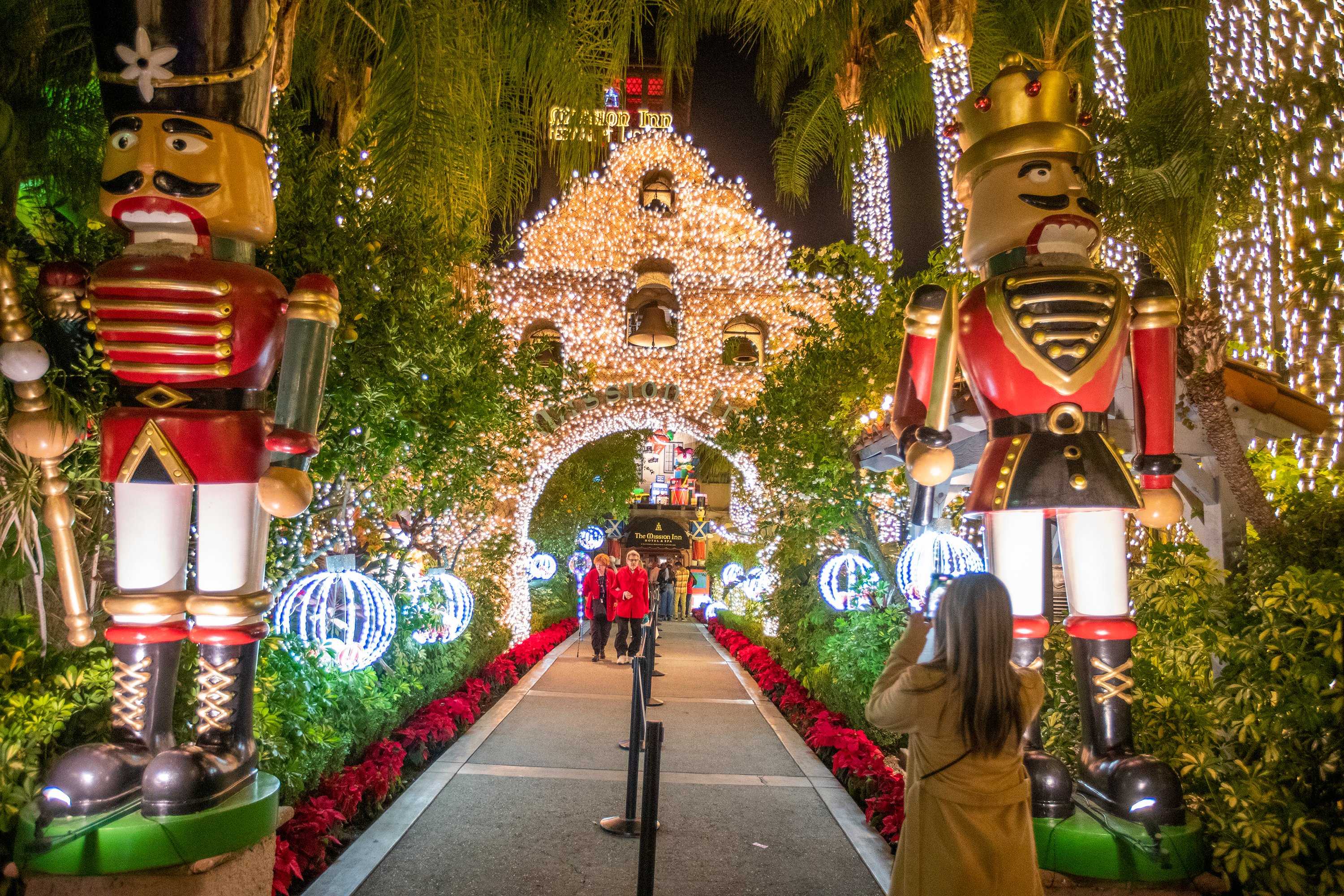 Festival of Lights at The Mission Inn Hotel & Spa in Riverside, California

Entering its 30th year in 2022, the Festival of Lights at The Mission Inn Hotel & Spa is a veritable winter village that pops up in the inland community each year. Aside from millions of lights covering the buildings and landscaping, there are selfie stations, dozens of trees decorated to within an inch of their lives, and temporary Christmas-themed sculptures installed along downtown’s main strip. Street performers, rides, and a holiday market round out the Hallmark-worthy experience that should be a must-visit for anyone living in the Golden State. 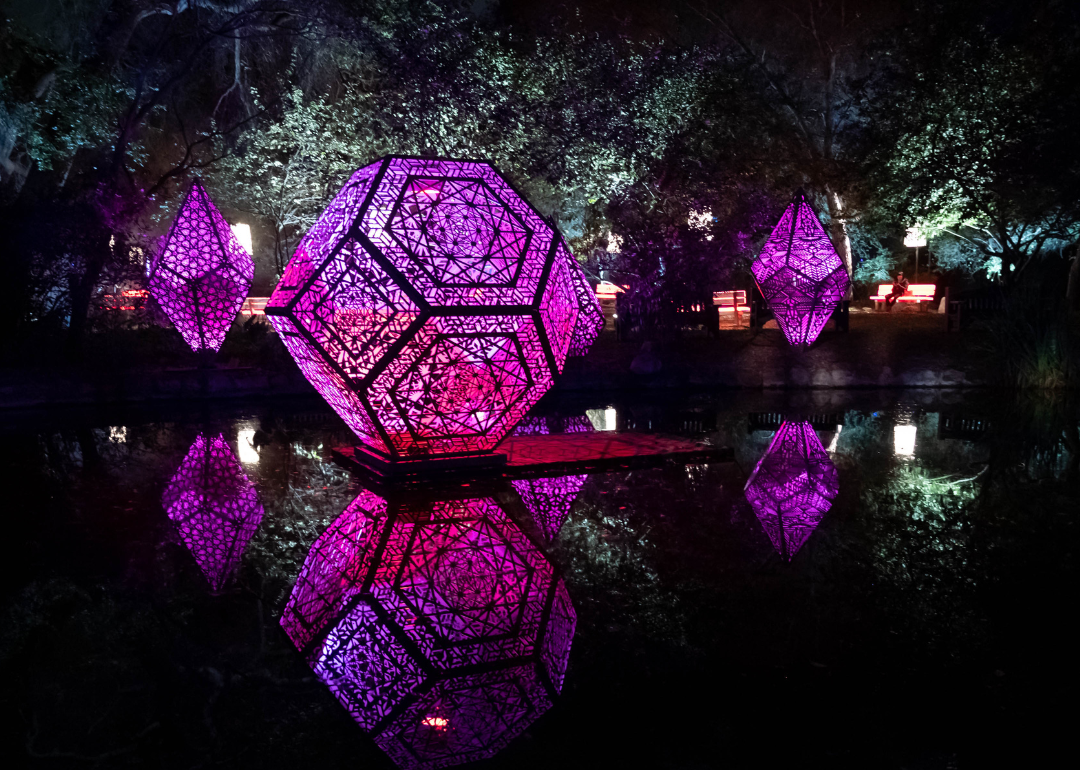 The Enchanted Forest of Light is an interactive event held yearly at the Descanso Gardens near Los Angeles. A one-mile stretch of the grounds is divided into several sections, each with its own theme—a town of stained-glass houses, an area filled with geometric installations, a flower power show, and an ancient forest lights portion—to name a few. Guests purchase timed tickets in advance, ensuring they’ll see everything fully without crowds blocking every jaw-dropping view. 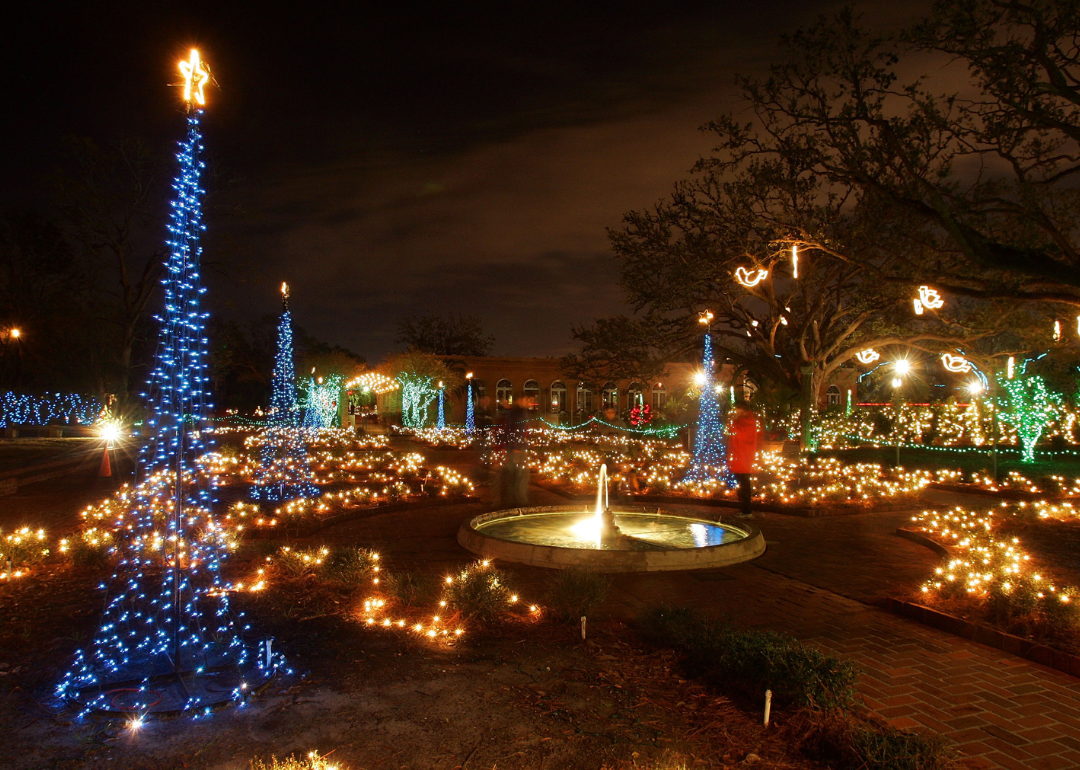 Celebration in the Oaks in New Orleans

The biggest fundraiser for city parks in New Orleans is the Celebration in the Oaks light show, which can be enjoyed in two different ways. Attendees can elect to drive through a 2.25-mile route while listening to a local radio station that syncs festive tunes with the lights on display, or they can choose to participate in the walking tour, which includes access to all 18 amusement park rides. Whichever way you decide to enjoy the more than 30-year-old event, you’re sure to have a magical time.