The cultural and historical significance of fashion on HBCU campuses 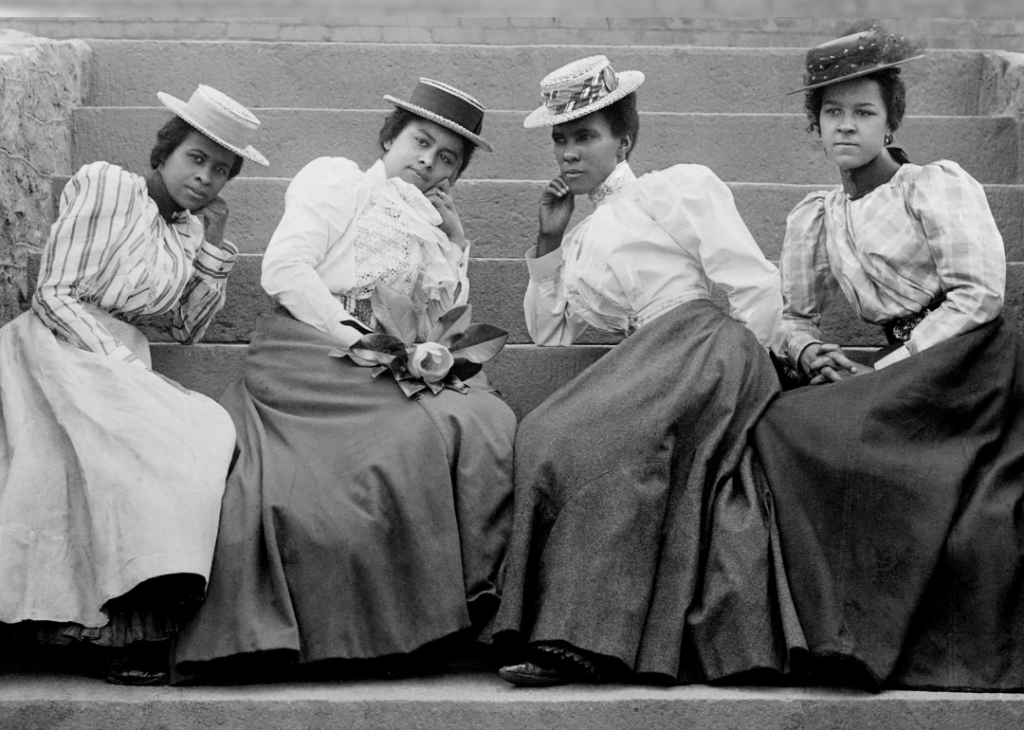 The cultural and historical significance of fashion on HBCU campuses

Across the campuses of historically Black colleges and universities, students have a reputation for making strong fashion statements, especially in the fall during the storied HBCU homecoming. Year-round, the fashion statements on HBCU campuses often tell a story as significant as the history of the institutions.

Before the Civil War, education was all but a pipe dream for most Black Americans as access to education was prohibited in most states, and Black students were not welcomed at existing colleges and universities—both public and private. HBCUs emerged in the mid-1800s to give Black Americans the higher education they were historically denied.

Today, HBCUs are seeing heightened enrollment, with a 30% increase in college applications between 2018 and 2021—even as the number of undergraduate students nationwide dropped nearly 10% during the COVID-19 pandemic. Considering HBCUs’ majority Black student populations, people consider these campuses to be overall safe spaces in regards to racism—despite recent bomb threats. These institutions promote school spirit and foster unity as communities that offer belonging and hold rich traditions.

A major part of the sense of community and tradition at HBCUs includes fashion and self-expression through style. Stacker explored the cultural and historical significance of fashion on HBCU campuses.

Elaine Nichols, a curator at the National Museum of African American History and Culture, told Stacker fashion isn’t just about aesthetics on HBCU campuses today, explaining that dressing up is a “historical strategy” Black Americans use for protection and to be treated with respect.

“Projecting an image of an upstanding and dignified person outside of the home offsets societal stereotypes of Black people as unkempt, lazy, dirty, and overly sexualized people,” Nichols said. “Dressing up demonstrated that African Americans were like other hardworking American citizens and were worthy of being taken seriously.”

Continue reading to learn more about the influence of history on HBCU fashion and the impact of student style on the fashion industry.

You may also like: Where school segregation is still happening across the US 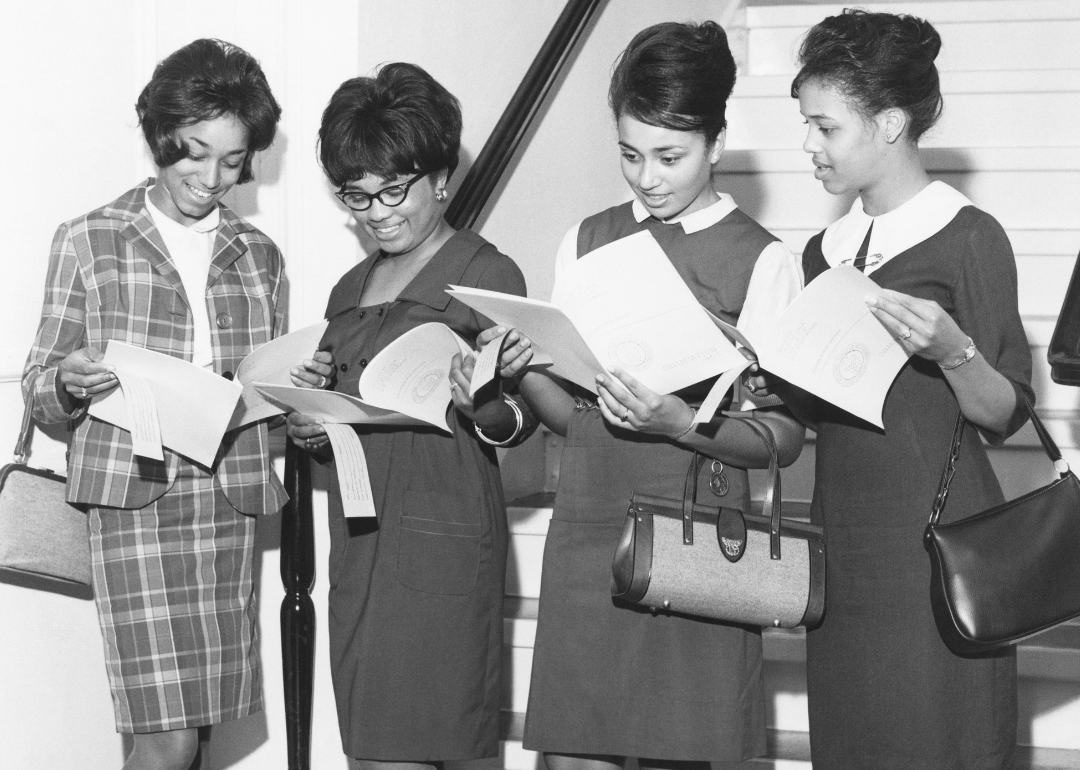 During the emergence of HBCUs, parents sent their young adults to school dressed impeccably as a symbol of status. There were certain times when students wore more formal attire for other reasons.

According to Nichols, “In the 1950s and 1960s, Black women students on Spelman’s campus were instructed to wear a type of uniform when they visited downtown Atlanta. They were expected to wear their Sunday clothes—a dress, hat, dress pumps, stockings, white gloves, and pearls—as a way of warding off white males who might otherwise approach them as ‘streetwalkers.’ And during the modern civil rights movement of the same period, males and females were told to wear their best clothes to the marches and demonstrations to send a message that they were respectable people on a mission to create positive change in America.”

While HBCU dress codes are not necessarily different than what’s required at other schools, students at these institutions are generally encouraged to dress conservatively to prepare them for their profession and to be taken seriously in the “real world.”

Some HBCUs have implemented dress codes where business attire is a requirement. For students in Howard University’s School of Business in Washington D.C., a suit is required twice a week during orientation sessions. Business students at Prairie View A&M University in Texas are expected to wear more formal attire for some professional development courses. While Florida A&M University doesn’t enforce a strict dress code, the school’s business majors take their own initiative in wearing suits to the business program’s forums. 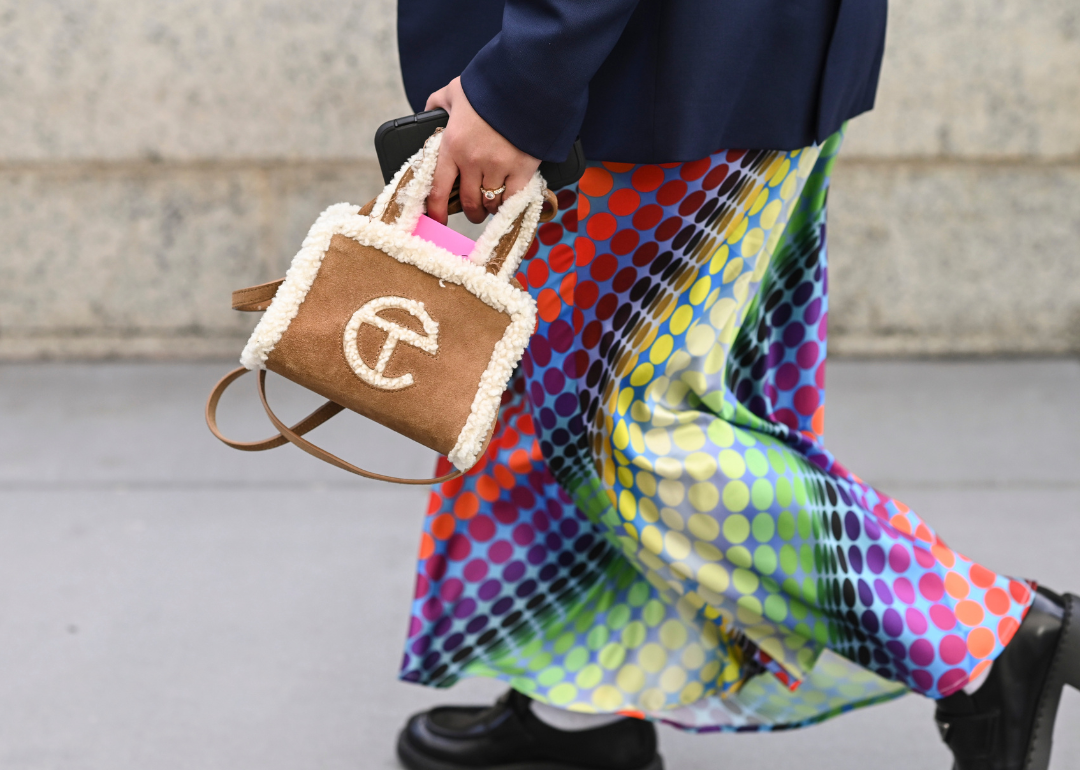 HBCUs are still relevant today, especially with current racial tensions, a strained political climate, and continued cases of police brutality across the nation.

At HBCUs, many students feel they can comfortably immerse themselves in a nurturing environment while striving for educational excellence. Part of that sense of security and freedom is on display in the outfits and individual styles HBCU students curate.

Students who attend HBCUs today can be seen donning their fashionable attire across campus, reflecting their personal styles, especially during homecoming. Professor Mikki Taylor in the Fashion Design Department at Howard University noticed distinct trends on the yard at Howard’s homecoming in October.

“What I noticed most is tote bags. The Telfar tote bags was very prevalent and also other tote bags. The man bag, the small crossover body bags, and lots of decorative colors—that was a huge trend,” Taylor told Stacker. “Another huge trend that came out that was very obvious to me was monogrammed jackets.”

Before the pandemic, Taylor observed high heels of all kinds were “an inherent style” for Howard University. Though, at homecoming, platform shoes and chunky sole sneakers took center stage along with tracksuits and natural hairstyles. 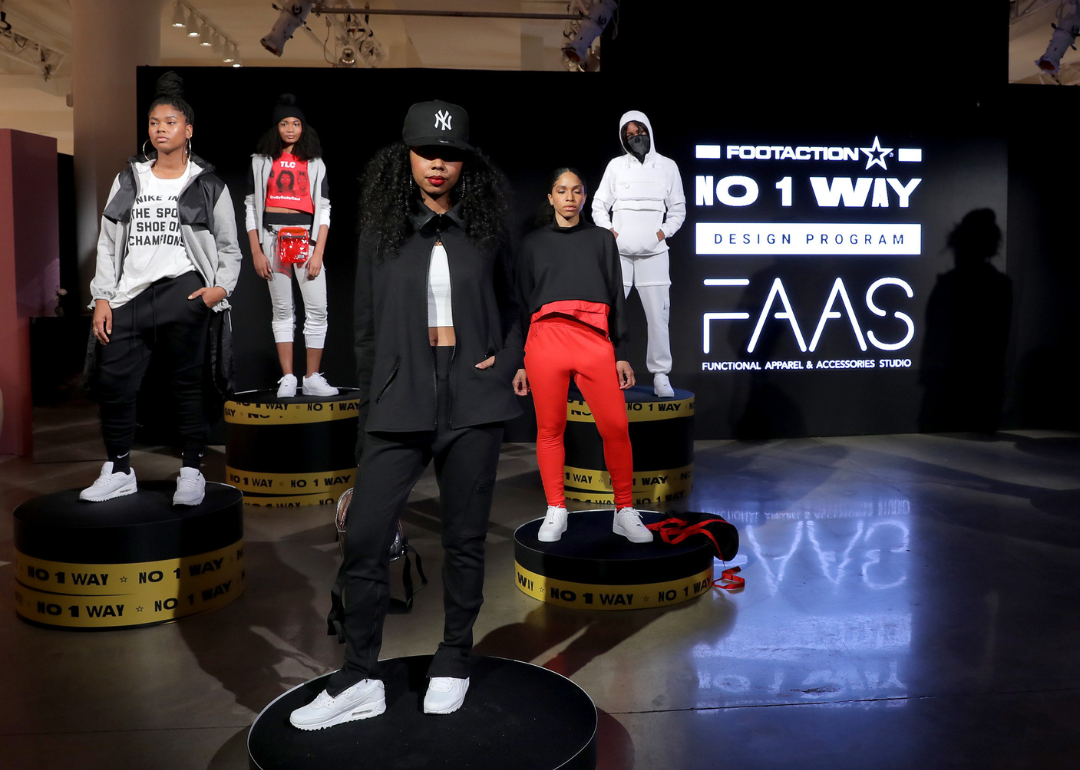 Top brands are partnering with HBCUs

In recent years, major clothing retailers and brands have partnered with HBCUs as a way to positively portray underrepresented communities. In August, Nike’s Jordan Brand announced a 20-year partnership with Howard University to “elevate Howard University’s athletic department, unlock new opportunities for recruitment and inspire a new generation to dream of excellence.”

Ralph Lauren also launched a collection with styles designed by alumni of Spelman and Morehouse colleges in Atlanta. It was a significant move on the part of the fashion house. It marks the first time the brand produced a campaign with a team of Black creatives, including the photographer, directors, and talent—all of whom were either students, faculty, or alumni from both institutions. 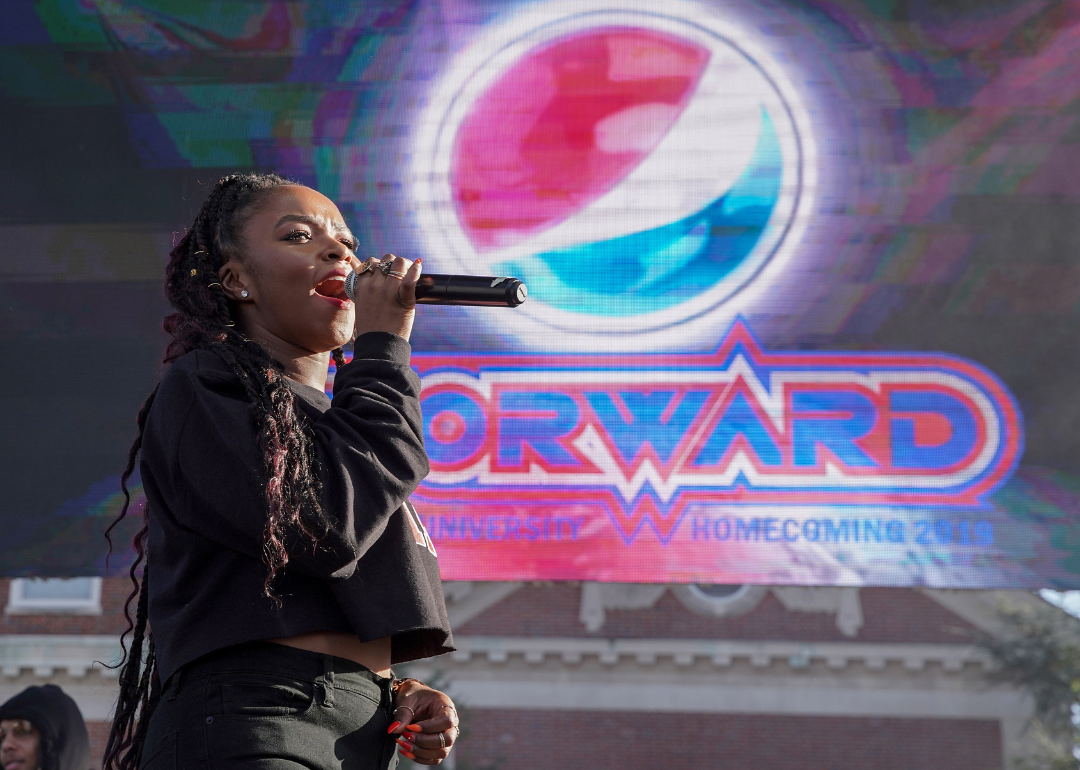 In October—when homecoming season usually begins—fall outfits of impeccable style are displayed “on the yard,” sharing the limelight with marching bands, majorette dancers, football games, and a step show from schools’ sororities and fraternities. It’s a celebratory moment of Black fellowship, a time when people from all over the country—current students, alumni, faculty, staff, nonalumni, celebrities, and other influential figures—gather together for a series of events to commemorate the legacy of HBCUs and the progress in education among Black Americans.

Other events on HBCU campuses give students the opportunity to get creative and display their personal style besides homecoming.  At Hampton University in Virginia, there are events such as Spring Fest Week, with festivities similar to homecoming in October but held in April. Students don their fashionable outfits on the yard, partake in the fashion show, and enjoy other activities.

At Alcorn State located in Mississippi, Purple and Gold Day usually takes place in February and is a time of school pride where students don their alma mater’s colors and university gear.

Florida A&M University also has its basketball games in the spring where students not only display their athletic gear but other unique styles as they cheer for the Rattlers, the school’s football team. 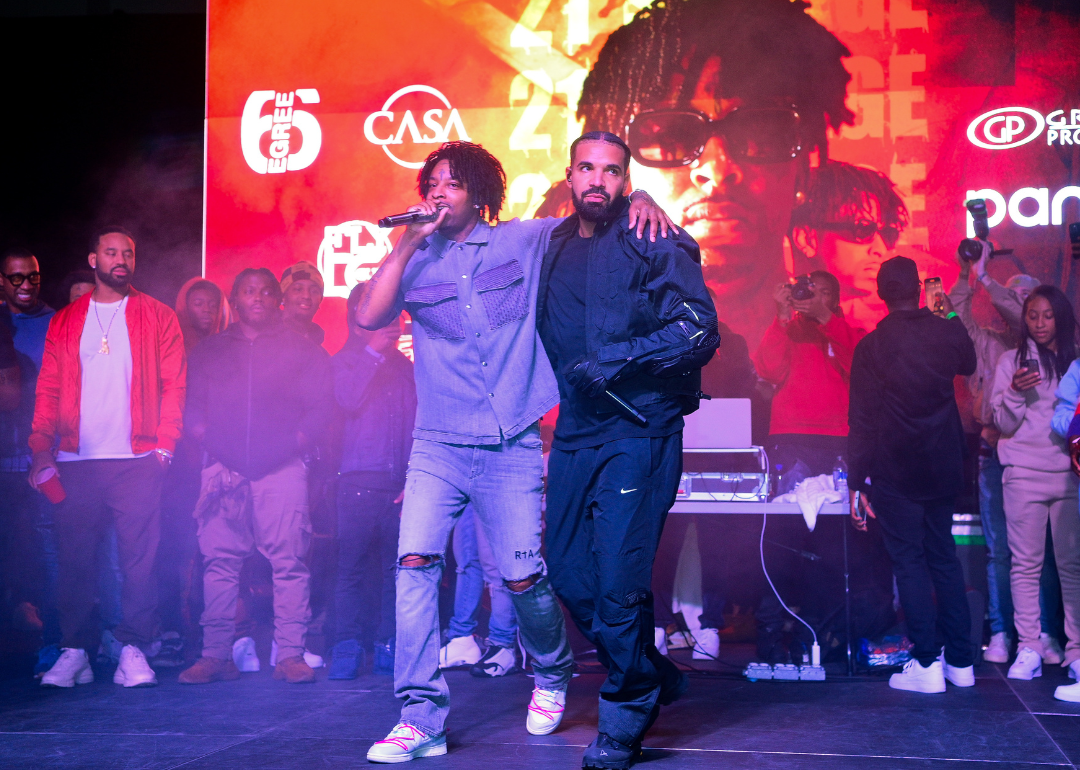 Celebrities and influential people partake in homecoming, too

HBCU events aren’t just celebratory moments for students, staff, and alumni—celebrities often partake in the fun as well. Over the years, HBCUs have hosted many celebrity performances and appearances.

Rapper Drake made a surprise appearance during Howard’s homecoming in 2012, as did reggae artist Beenie Man. In 2022, Drake performed at Spelman and Morehouse’s homecoming and brought out fellow rapper 21 Savage.

While there’s an endless list of HBCU alumni who visit their alma maters during homecoming after garnering fame or who contribute financially after finding success, such as Diddy, Phylicia Rashad, and Oprah Winfrey, the fact remains that attending an HBCU isn’t just about sporting fashionable attire on the yard and keeping up with trends.

Students leave campus with not just a degree but with meaningful connections and a feeling of pride, knowing they’ve walked in the footsteps of individuals who faced great obstacles, all while exuding their unique sense of style.