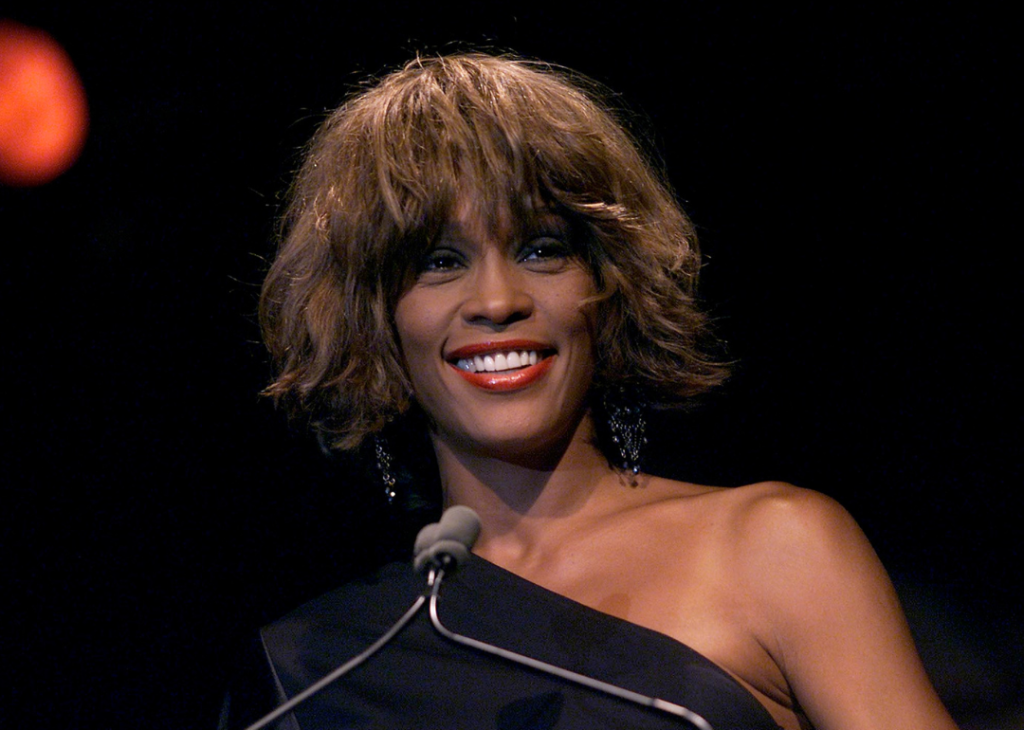 Whitney Houston’s vocal talent lifted her to the top of the music charts with a catalog of hits such as “I Wanna Dance With Somebody,” “Run to You” and her version of “I’m Every Woman” (originally recorded by Chaka Khan). With the ability to maneuver between high and low registers effortlessly, it’s no surprise how Houston became an icon, commanding respect through her artistry, one hit after another.

Born to a musical dynasty, Houston’s mother is Grammy-winning gospel vocalist Cissy Houston (who sang background for artists like Elvis Priestly and Aretha Franklin) and her father, John Russell Houston Jr., was an entertainment manager and army veteran. Her mother’s cousin, Leontyne Price, is a renowned soprano with a Medal of Freedom and a National Medal of Arts to her name. Houston was also the cousin of Dionne Warwick, a six-time Grammy-winning recording artist who’s sold more than 100 million records.

Houston was called to music at an early age, beginning as a background singer for her mother, who would open the industry’s doors for her. As a teenager, Houston sang background vocals for Chaka Khan, and in 1984, Houston released her first single, “Hold Me,” shortly after signing with Arista Records. Houston would go on to release a slew of Billboard hits including “Saving All My Love for You,” “Didn’t We Almost Have It All,” and “Where Do Broken Hearts Go.” She would also pivot to acting, starring in such movies as “The Bodyguard” in 1992, “Waiting to Exhale” in 1995, and “The Preacher’s Wife” in 1996 alongside film legend Denzel Washington. It was “The Bodyguard” that gave audiences Houston’s unforgettable rendition of Dolly Parton’s “I Will Always Love You.” The soundtrack would become Billboard’s bestselling soundtrack album of all time, selling 45 million copies globally.

Houston was a musical force to be reckoned with, but marital problems and personal demons would taint her image. Despite the public challenges she faced, however, Houston is still regarded as one of America’s most talented vocalists of all time. For that reason, Stacker compiled a list of 16 significant events in the life of the late iconic singer and actress. 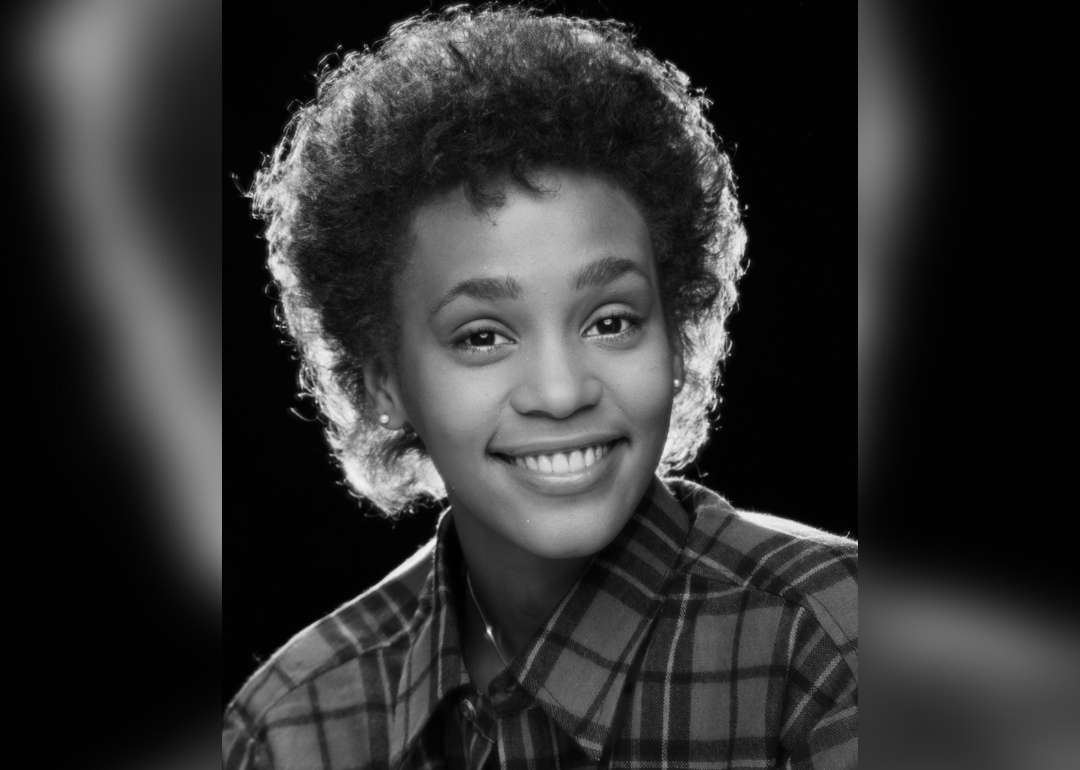 “Nippy,” a name affectionally given to Whitney by her father, John Houston, was born on Aug. 9, 1963, in Newark, New Jersey. She started out singing as a child at New Hope Baptist Church in Newark where her mother, Cissy Houston, was a minister of music for 54 years. By age 11, she was singing solos to an awed congregation. Houston attended Franklin Elementary School in East Orange, New Jersey, where she grew up. The school was later renamed the Whitney E. Houston Academy of Creative and Performing Arts in 1997. 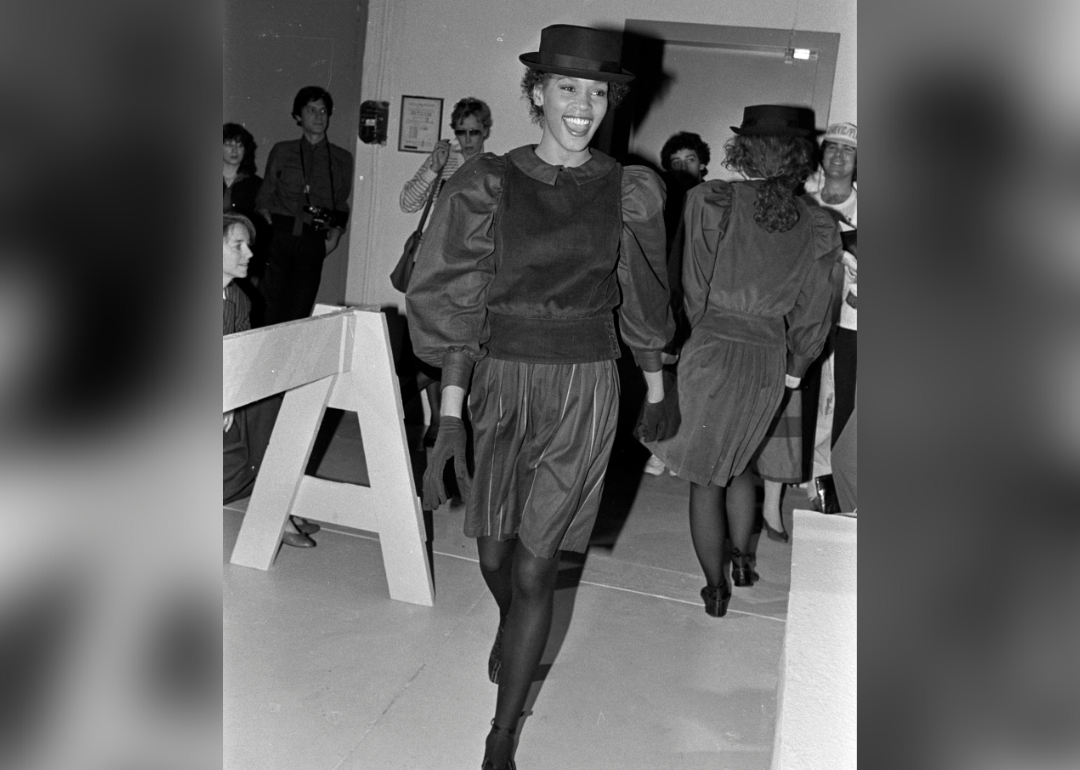 Early ’80s: One of the first women of color on magazine covers

Before her singing career took off, Houston had been a fashion model since 16 after she was spotted by a modeling agent while out in New York City with her mother. She was one of the first Black women to appear in Seventeen magazine and also landed photo spreads in such publications as Glamour and Cosmopolitan. 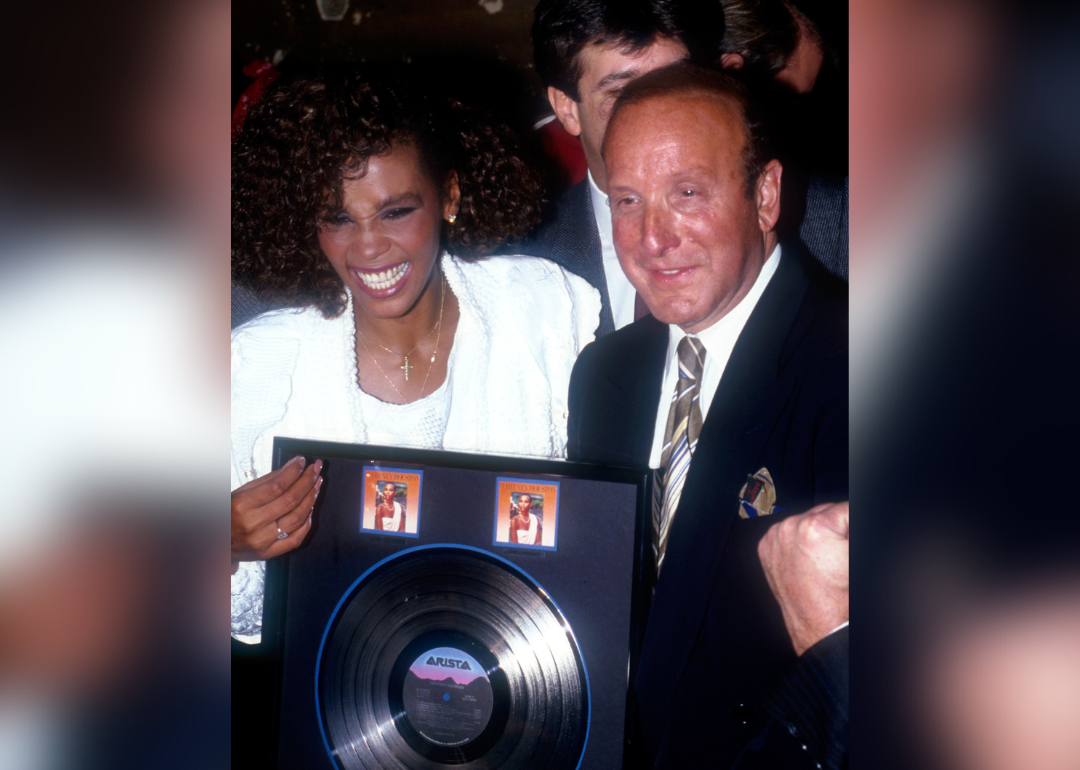 In 1985, Houston released “Saving All My Love for You,” a song from her self-titled debut album about unrequited love (allegedly written with Jackson 5’s Jermaine Jackson in mind). The single would become her first #1 hit on the Billboard Hot 100 chart and earn Houston her first Grammy Award for Best Female Pop Vocal Performance in 1986. 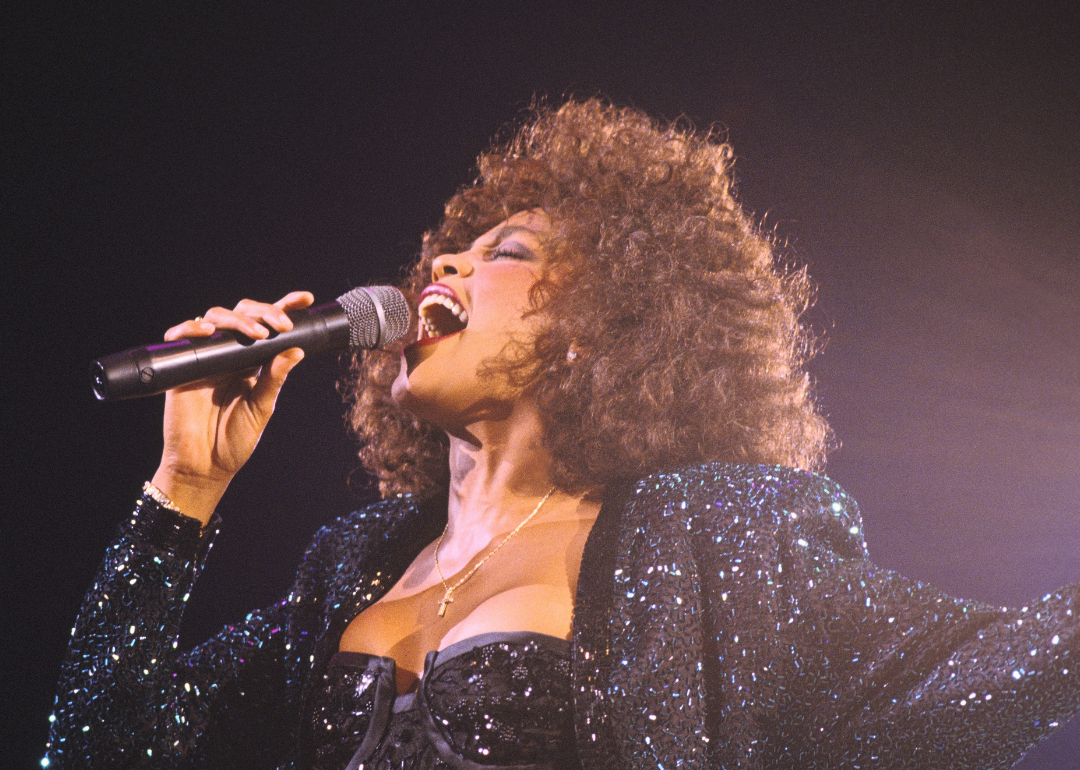 Houston’s hits from the mid-’80s like “Saving All My Love for You,” “How Will I Know” and “Greatest Love of All” were among the chart-toppers that earned the rising star several consecutive Billboard Hot 100 hits. When “Where Do Broken Hearts Go” reached #1 on the Billboard Hot 100 in April 1988, Houston shattered the record previously held by the Beatles and the Bee Gees. 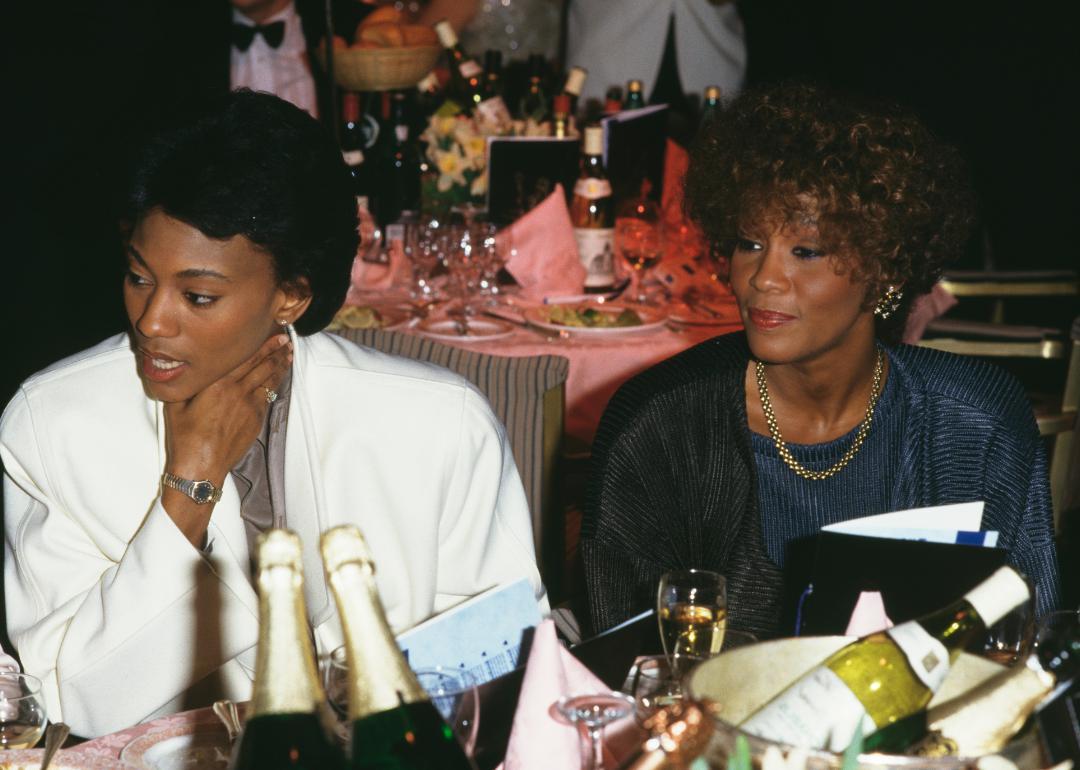 Over the years, the rumor mill has spun about Houston’s relationship with her friend and former assistant Robyn Crawford. According to Crawford, the two met each other as teenagers in 1980 while working as summer camp counselors in East Orange, New Jersey, where the two formed an immediate bond.

In her 2019 memoir, “A Song For You: My Life with Whitney Houston,” Crawford claimed they began a lesbian relationship at this summer camp, where the two allegedly “spent the night together.” In the book, Crawford shared: “She said we shouldn’t be physical anymore because it would make our journey even more difficult. She said if people find out about us, they would use this against us, and back in the ’80s that’s how it felt.”

Supposedly, it was Houston who ended their intimate relationship in 1982. However, years later, in 1987, a 23-year-old Houston addressed whispers concerning her sexuality head-on, telling Time magazine: “Let people talk. It doesn’t bother me because I know I’m not gay. I don’t care.” 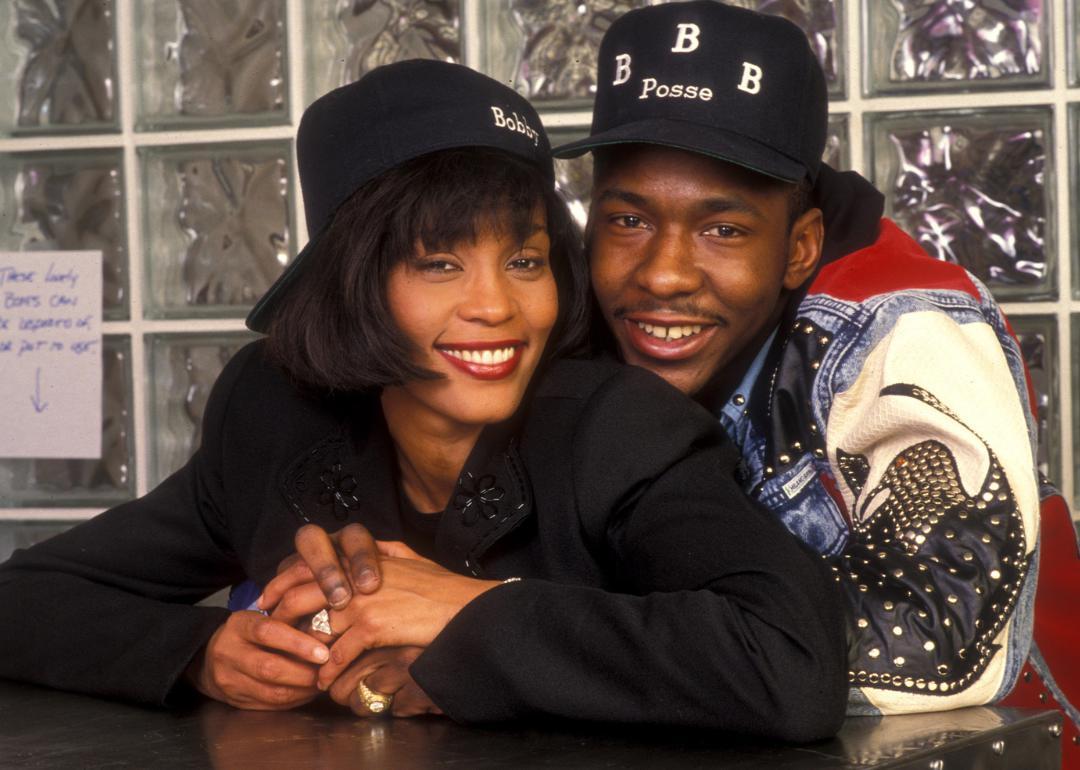 Houston and Bobby Brown of the R&B group New Edition met at the 1989 Soul Train Music Awards, where Houston invited Brown to a party afterward. After keeping in touch, Brown asked her out months later. The couple’s relationship came as a surprise to many. Brown was known for his “bad boy” persona while Houston was known as the good church girl. The couple—respectively successful in their solo careers—married in 1992 and welcomed daughter Bobbi Kristina Brown the following year. However, their relationship soon became mired with allegations of drug addiction, physical abuse, and infidelity. The two officially divorced in 2007. 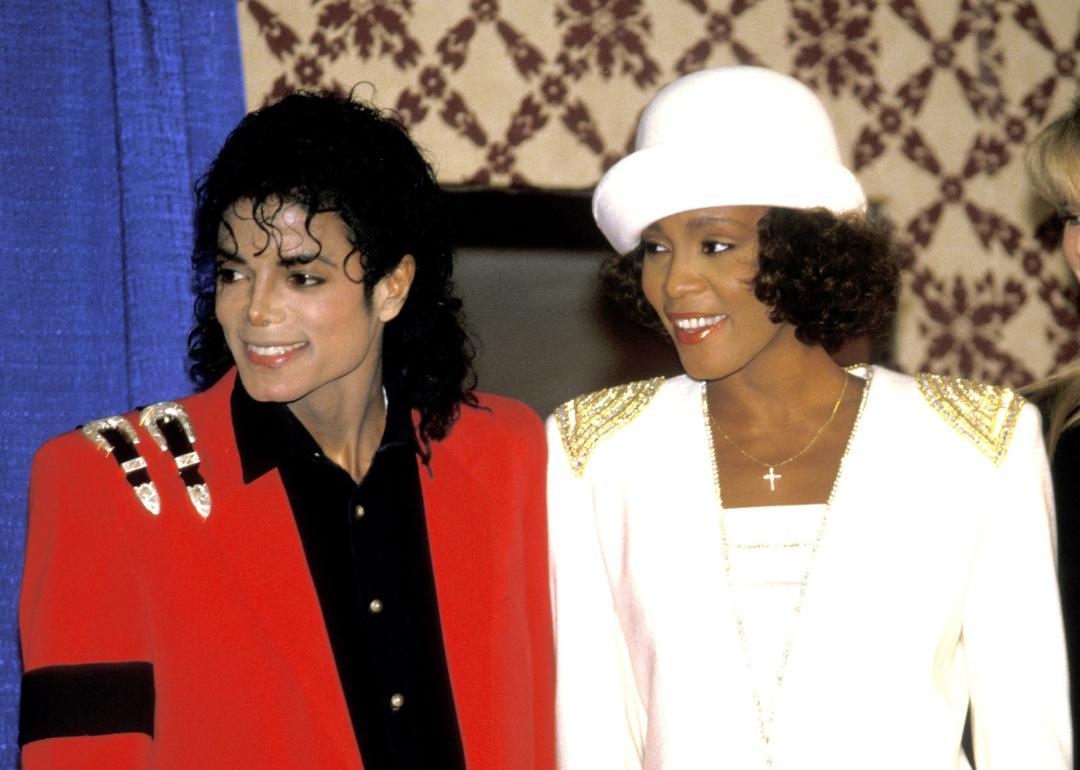 Houston and Michael Jackson had a special connection as they both experienced massive success in the music industry. In fact, it’s been said that their bond went beyond friendship and that the two had carried on a romantic relationship behind closed doors. Matt Fiddes, Jackson’s former bodyguard, claimed as much in a 2012 interview with The Sun, alleging the stars’ romance began in 1991. Fiddes even claimed Houston shacked up with Jackson at the King of Pop’s Neverland Ranch; however, the fling didn’t last longer than two weeks. 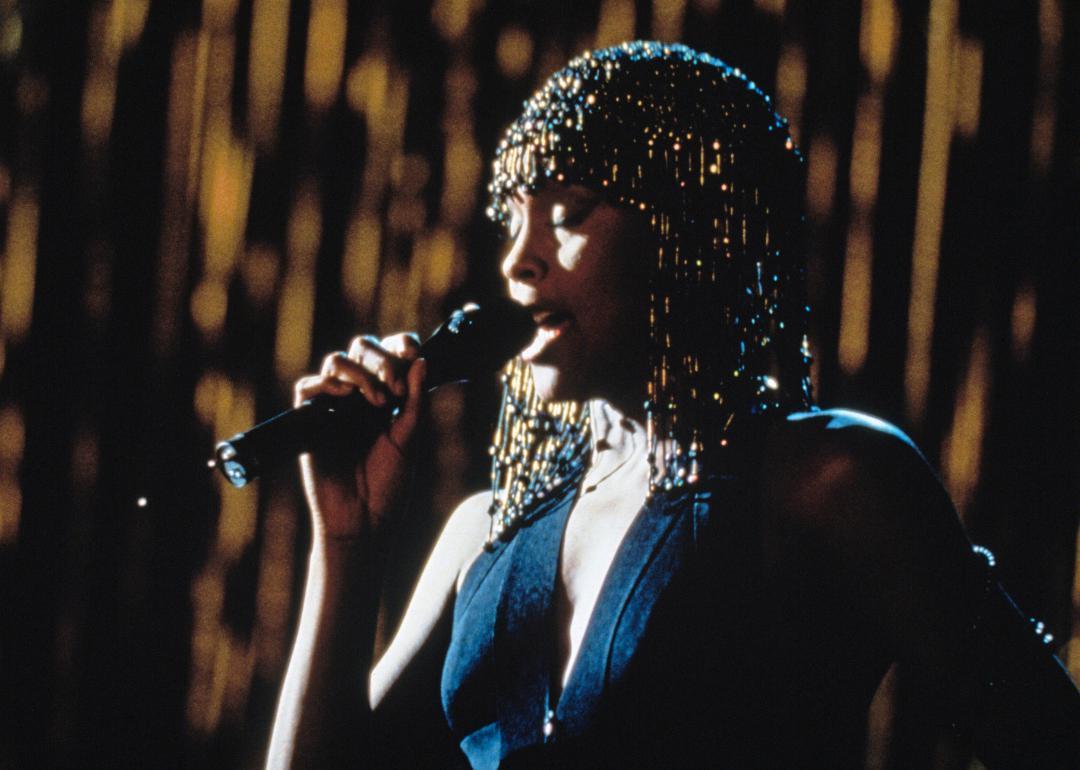 In 1992, a 29-year-old Houston made her film acting breakthrough in “The Bodyguard,” portraying the character Rachel Marron, a superstar who finds love with her bodyguard Frank Farmer (Kevin Costner) amid the threat of a dangerous fan. The film earned more than $410 million worldwide. Its soundtrack sold over 2 million copies within five weeks of its release. “I Will Always Love You” (written and originally performed by Dolly Parton) would become Houston’s signature song, earning the star the 1994 Grammy Awards for Record of the Year and Best Female Pop Vocal Performance. 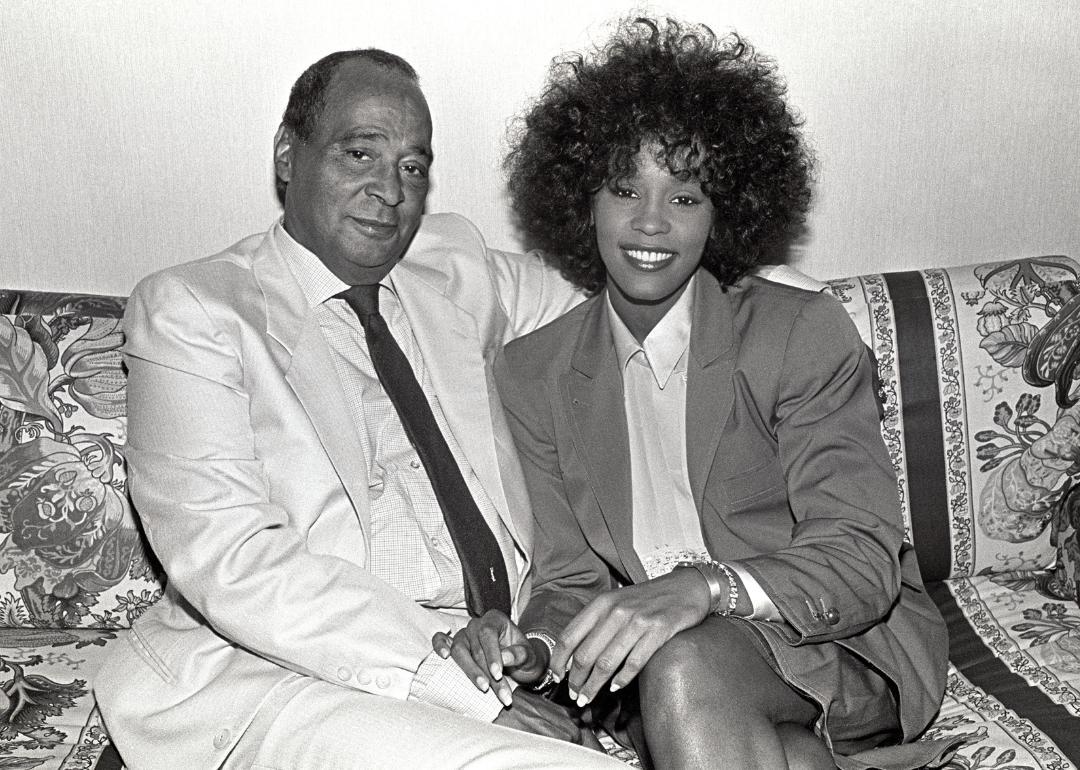 In 2002, Whitney became embroiled in a legal war with John Houston Entertainment, owned by her father, John Houston. The lawsuit claimed the singer failed to pay the company for legal management, including representing her during a drug bust in Hawaii in January 2000. The suit also claimed the management company helped the singer secure a $100 million contract with Arista Records.

Whitney’s father, who had been dealing with health issues, died the following year, in 2003. In a 2009 conversation with Oprah Winfrey, the singer revealed she had visited John in the hospital and made amends with him before he passed away. 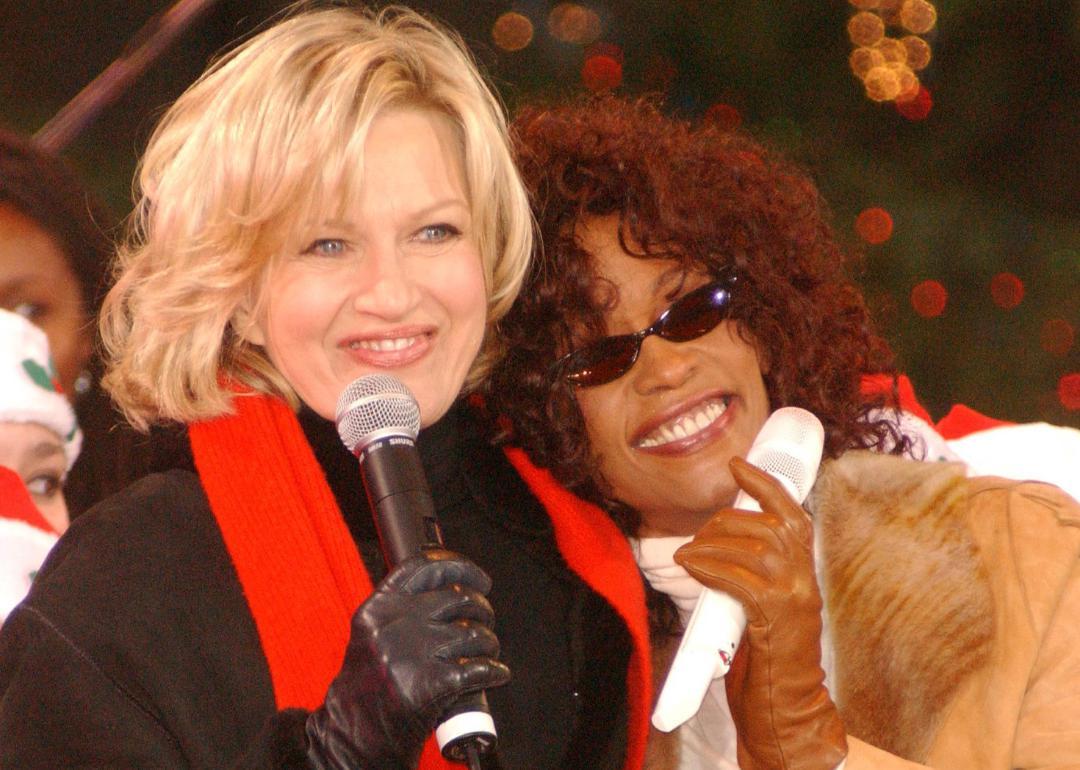 Fans began worrying for Houston, whose noticeably thinner physique in pictured appearances sparked health concerns. At this time, the singer had canceled several gigs and consistently made headlines for her ostensibly erratic behavior. Then, in 2002, Houston emerged in a televised sit-down interview with Diane Sawyer that would alter her public image forever.

While promoting her album “Just Whitney,” Houston admitted to indulging in alcohol and marijuana in the past. When Sawyer inquired about the more recent rumors of her unhealthy drug use, asking about crack specifically, Houston shot back: “Crack is cheap. I make too much money to ever smoke crack. Let’s get that straight, okay? We don’t do crack. Crack is whack.”

The infamous “crack is whack” phrase troubled viewers and the interview served as an unofficial confirmation that there was truth to the stories of Houston’s drug dependency. 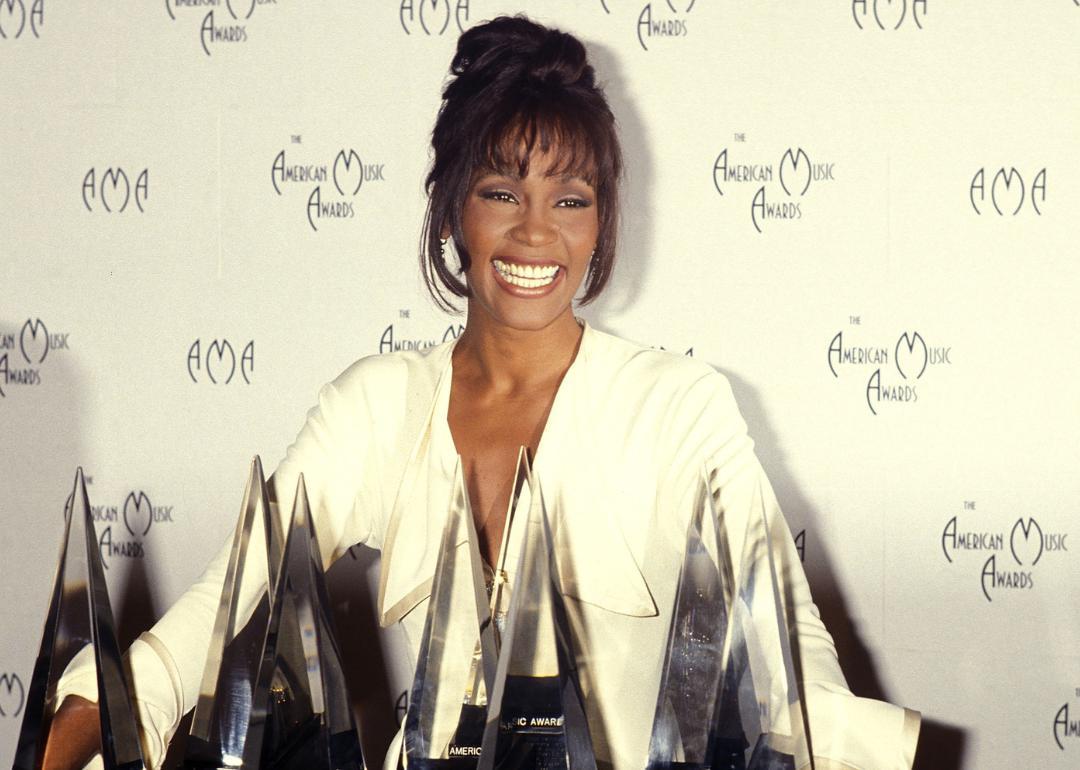 By the early 2000s, it was publicly known that Houston was battling drug addiction. The singer initially began rehab in 2004 and again in 2005 with the support of her mother, Cissy Houston.

In a 2009 interview with Oprah Winfrey, Whitney admitted to her drug use, revealing: “We were lacing our marijuana with base. We weren’t on crack. We weren’t on no crack stuff. We weren’t buying $20 jumbos. We were paying money. We were buying kilos and ounces and ounces. We would have our stash.” 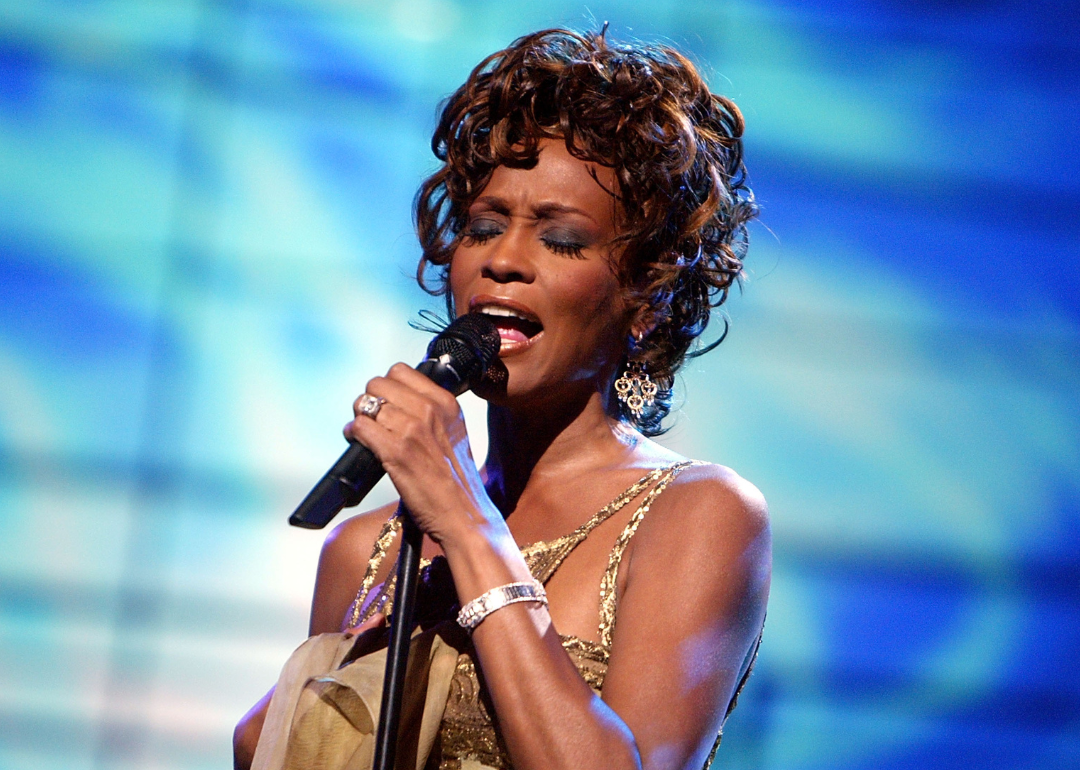 Houston by this time had garnered more than 400 awards throughout her career—including six Grammy Awards, 22 American Music Awards, and several Billboard Music Awards—making her the most-awarded female artist of all time. Speaking about her love for singing, the icon said, “God gave me a voice to sing with, and when you have that, what other gimmick is there?” 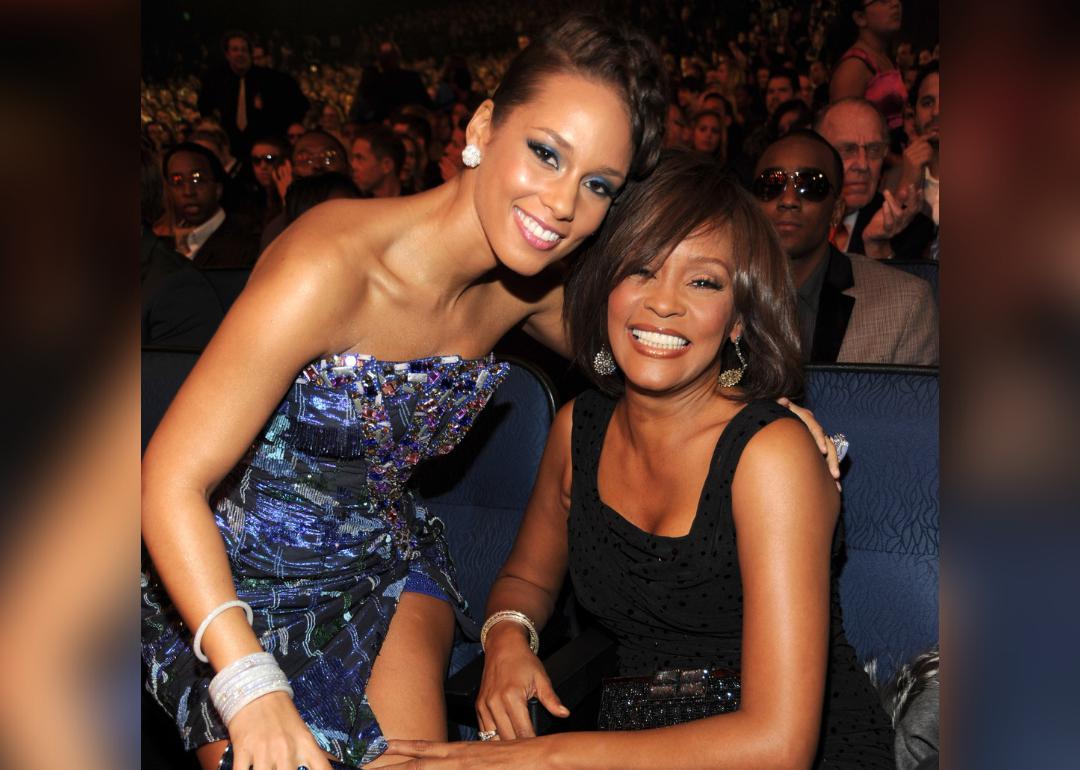 Houston was impressed with Alicia Keys’ music and personally reached out to the singer-songwriter about working together on her follow-up to 2003’s “One Wish: The Holiday Album.” The two became friends, and in 2009 Houston released the single “Million Dollar Bill,” written and produced by Keys and her music producer husband, Swizz Beatz. Recorded in New York City, “Million Dollar Bill” served as the last single Houston from her seventh studio album, “I Look to You,” her last project before her untimely death in 2012. 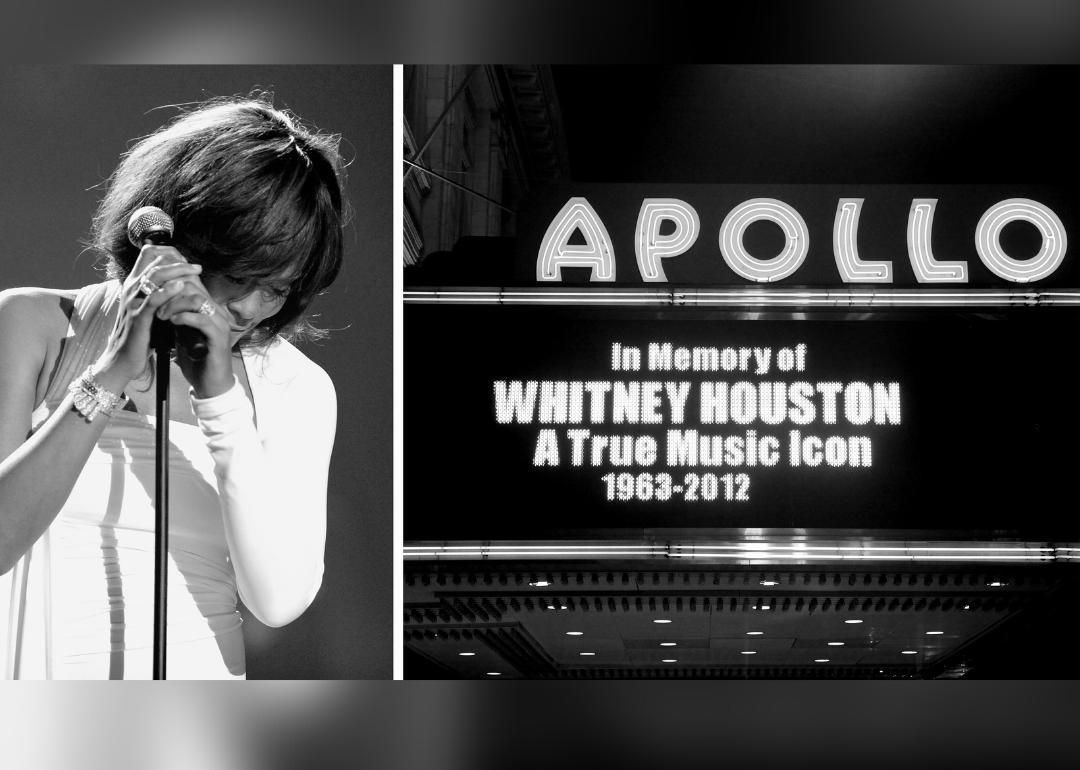 Houston was found dead inside a bathtub by her bodyguard at the Beverly Hilton hotel in California, just hours before the singer was expected to attend a pre-Grammy Awards event in Los Angeles. She was 48 years old.

The Los Angeles County Coroner’s Office determined drowning, heart disease, and cocaine use as the cause of death. Various prescription medication bottles were also found in her hotel room at the time of her passing.

Less than three years later, Houston’s daughter with Bobby Brown, Bobbi Kristina Brown, died at age 22 in an eerily similar scenario after being discovered unconscious in her bathtub in January 2015. After nearly six months spent hospitalized in a comatose state, Bobbi died from lobar pneumonia the following July. 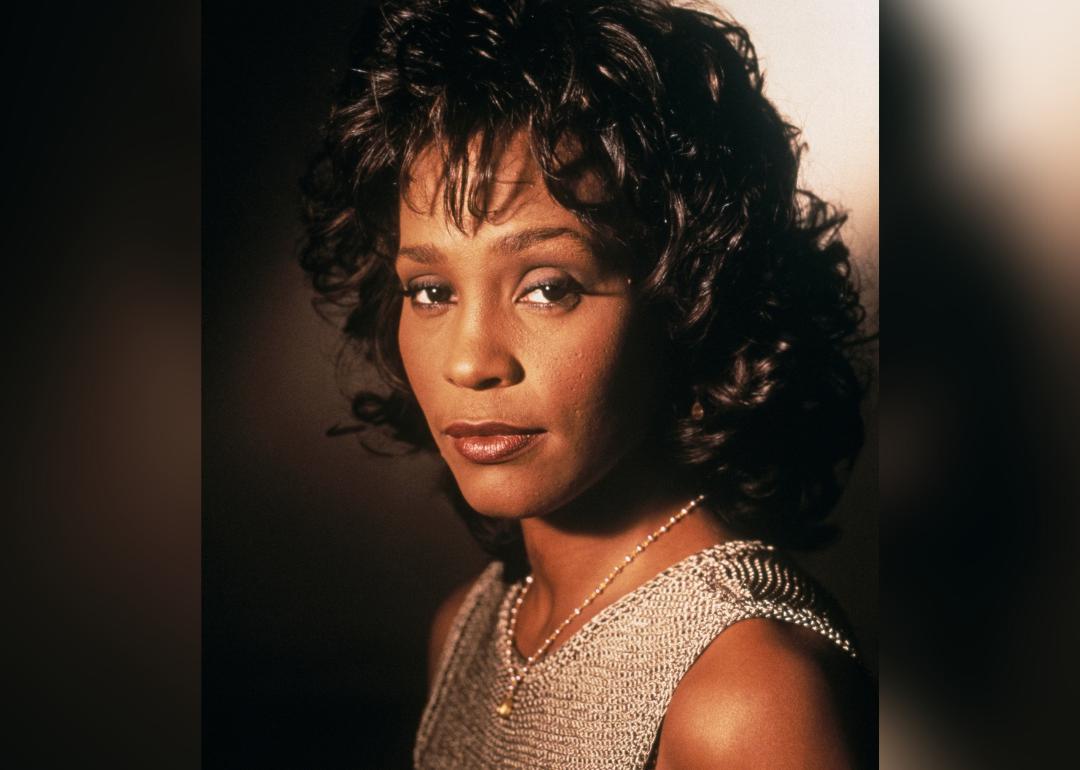 In the 2018 documentary “Whitney,” two family members claimed Houston was abused as a child by her cousin Dee Dee Warwick, who is a musician and the sister of singer Dionne Warwick. Whitney’s half-brother Gary Houston has made similar claims against Dee Dee, alleging she sexually abused him between the ages of 7 and 9. The film, directed by Kevin Macdonald, was made with the cooperation of the Houston family. 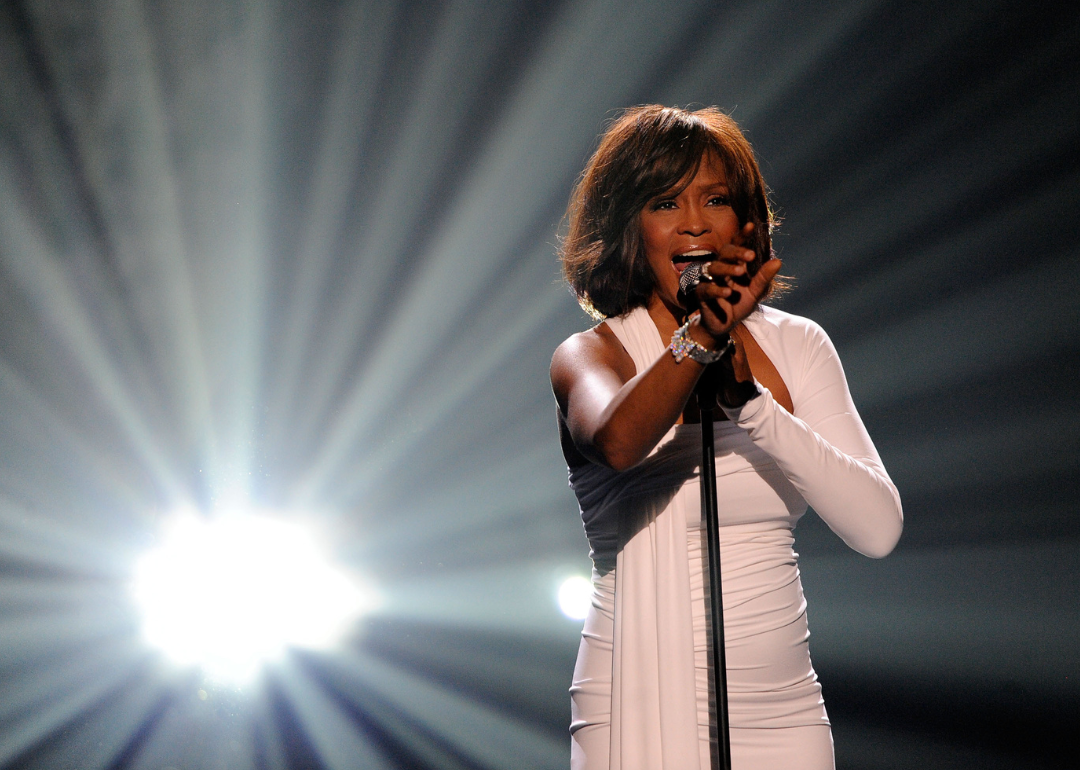 When Houston originally recorded her cover of Steve Winwood’s “Higher Love,” it was meant to be included on her third studio album, “I’m Your Baby Tonight,” but ended up being a Japanese bonus cut on the record instead. Almost 30 years later, Norwegian EDM star Kygo was tasked to remix Houston’s vocals, creating a fresh summer-ready sound that became Houston’s first Billboard Hot 100 entry in a decade and her first posthumous hit.