After a decade of decline and a pandemic dip, college enrollment is leveling off 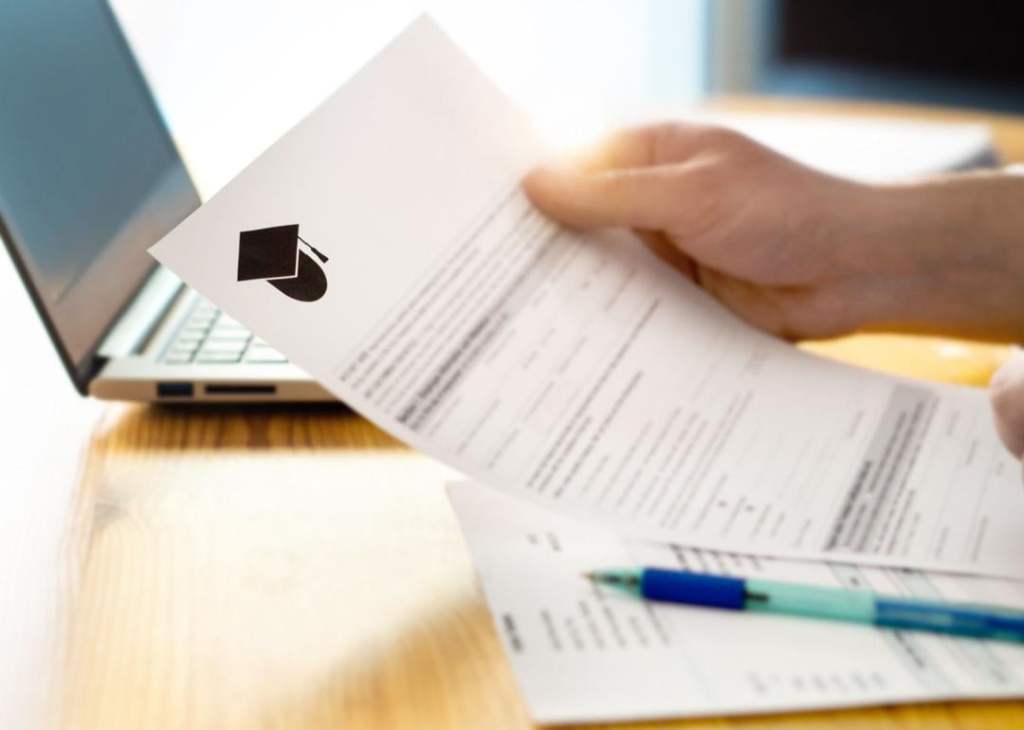 After a decade of decline and a pandemic dip, college enrollment is leveling off

Where did all the college kids go?

Many high school graduates opted to join the workforce in recent years instead of taking college classes. Others enrolled in trade programs. Many planned to enroll after a pandemic gap year but have yet to do so. For decades, programs such as federal student aid, affirmative action, the GI Bill, and cultural attitudes around feminism led to a steady increase in college enrollment in the United States—particularly among populations for whom college was not attainable due to financial constraints or societal barriers. And then that growth stopped.

EDsmart cited data from the National Center for Education Statistics to look at current and projected college enrollment figures, contextualizing the decline.

Some experts believe declining college enrollment is primarily an economic concern as people weigh the value of a college education against the often long-term financial burden of student debt. More education isn’t always the key to more money. A 2021 study from Georgetown University’s Center on Education and the Workforce found that 16% of high school graduates and more than one-quarter of associate’s degree holders earn more than half of workers with a bachelor’s degree.

Enrollment in trade programs such as construction, HVAC, and automotive repair is growing in tandem with industry demand for skilled workers. Even for unskilled workers, job availability coupled with significant earnings increases for low-wage workers is appealing to young people deciding between enrolling in college and joining the workforce.

College enrollment has declined for more than a decade, following several decades of consistent growth. A stagnating population in the wake of the Great Recession, while not yet a factor in college enrollment, could also rear its head in several years as graduating high school classes get smaller. 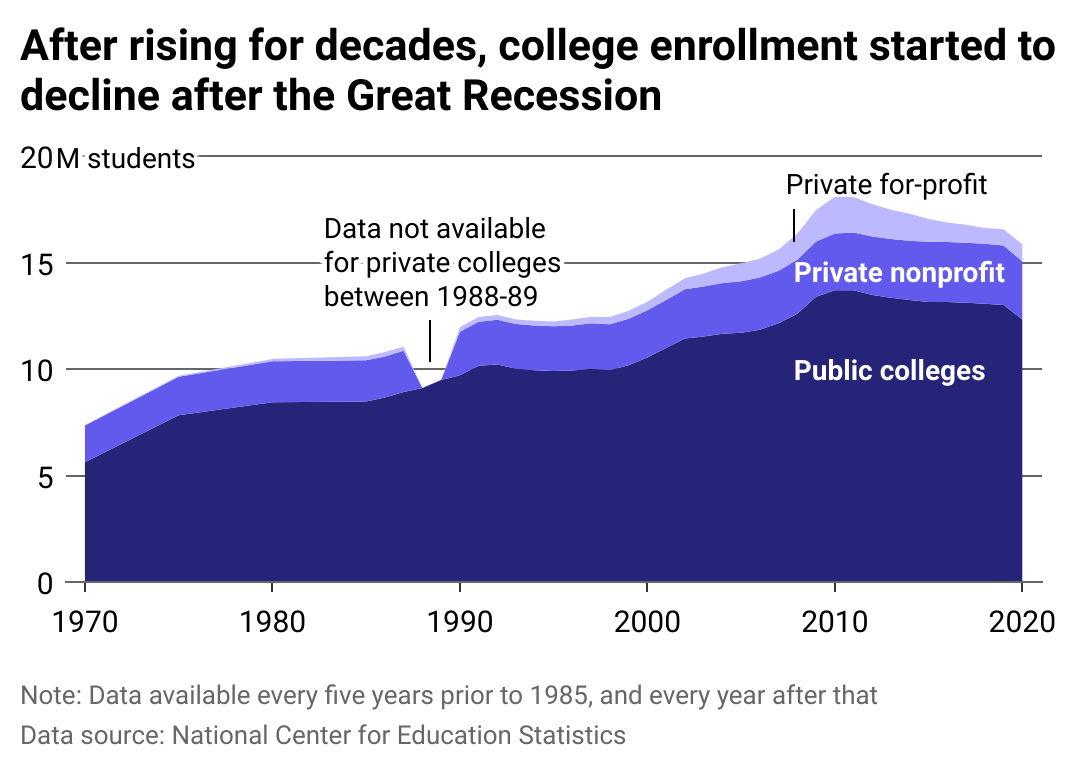 The pandemic exacerbated a trend already a decade in the making across private and public colleges. There are roughly 3 million fewer students enrolled in college today than in 2012. Cost may also be contributing to this decline. Two- and four-year schools are more expensive today than a decade ago.

While it is tempting to blame the Great Recession for initiating this decline, research shows students were more likely to enroll in college, particularly as part-time attendees, during this period of financial uncertainty. With historically less job availability or career mobility during a recession, interest in higher education increases. Instead, more students were likely evaluating the potential return on college investment and opting to join the workforce. 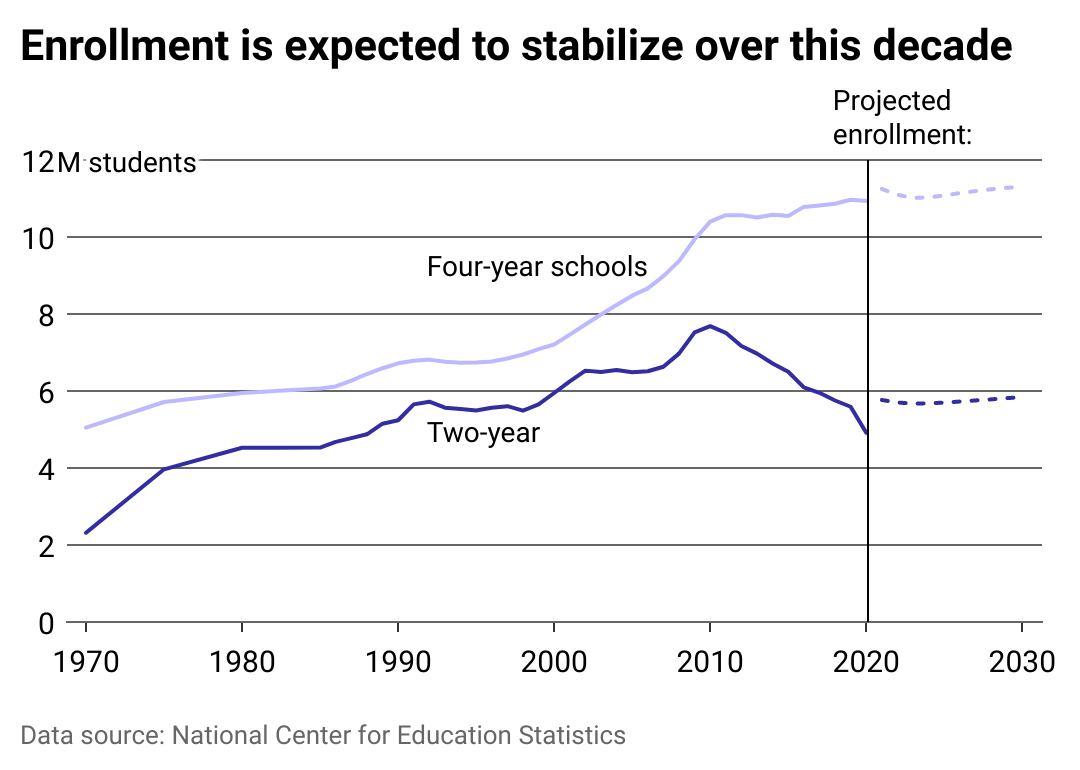 Two-year colleges continued a decade-long trend of declining enrollment, with a 13% drop in the last two years alone. Preliminary 2022 enrollment data shows this decline across two- and four-year schools is slowing and is projected to stabilize by 2030. 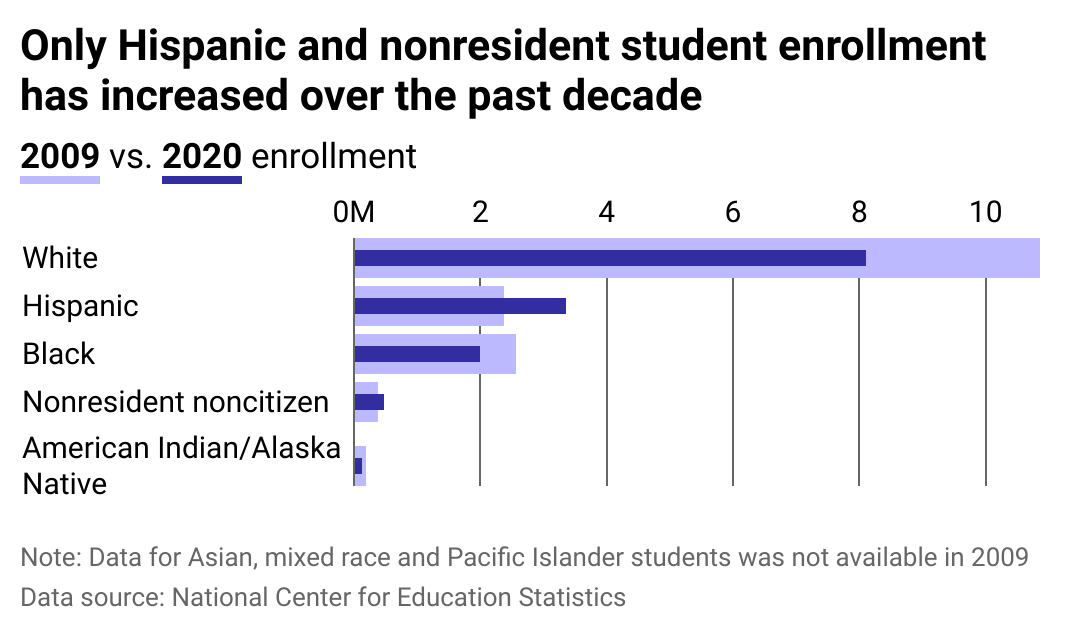 Most demographics have seen a decline in enrollment since 2009

Increased enrollment among Hispanic students is due in part to their increasing share of the overall population over the last decade. The Hispanic population grew roughly 20%—or by 12 million people—between 2010 and 2021, compared to the country’s overall growth rate of 7%.

In 2020, Latinos accounted for 20% of all postsecondary students. For other segments of the population, enrollment trends are less noticeable. For instance, while enrollment of Black students is down, those choosing to attend college are turning to Historically Black Colleges and Universities at a record rate. Many HBCUs saw a surge in applications following the pandemic, with Morgan State University reporting a 58% increase in 2021 compared to 2019. HBCU enrollment continued to buck the broader downward trend, growing by 2.5% in the fall of 2022. 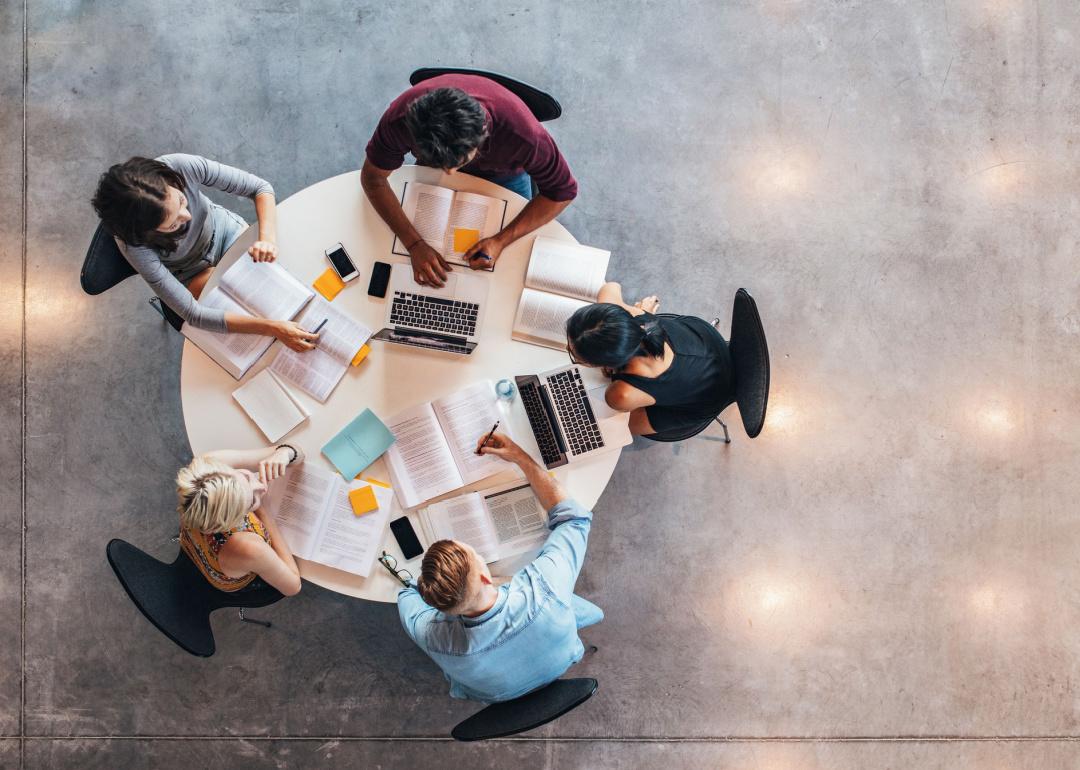 Cuts to higher education funding have contributed to tuition increases over the last decade, placing a more significant financial burden on students and reducing access to postsecondary opportunities for many prospective applicants.

Students planning on attending public colleges, which are historically cheaper than private schools, may be unable to afford them out of pocket or unwilling to incur that much debt. According to an analysis from the Center on Budget and Policy Priorities, state funding for public two- and four-year colleges in 2018 was $6.6 billion below 2008 levels after adjusting for inflation. Despite reinvestment over the last several years, funding at public institutions is still 13% lower per student than in 2008.

This story originally appeared on EDsmart LLC and was produced and
distributed in partnership with Stacker Studio.